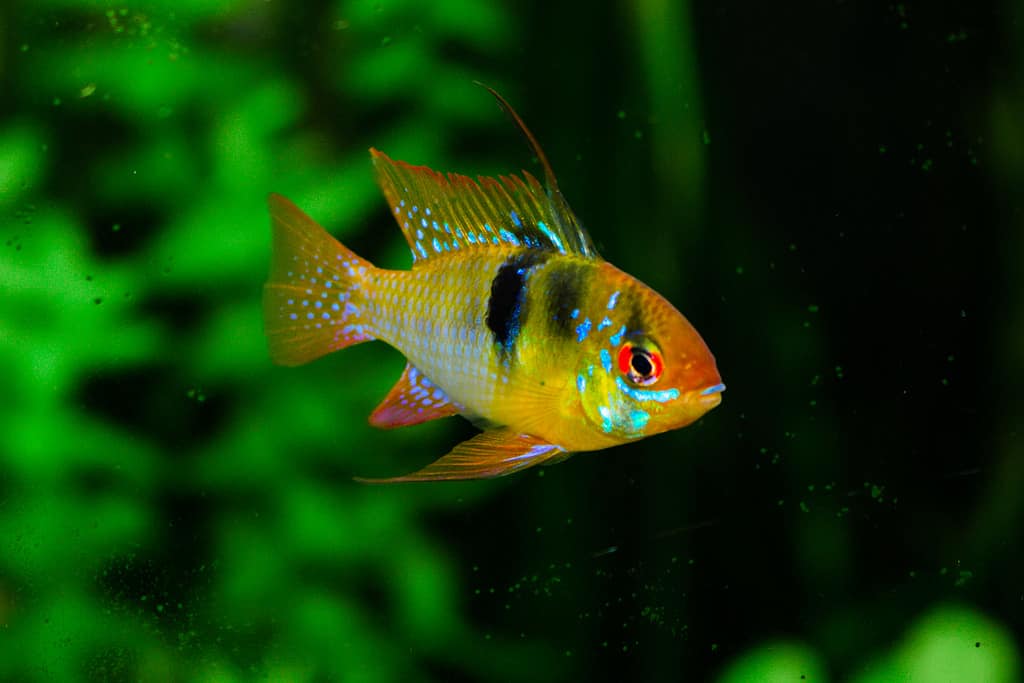 When setting up an aquarium and picking fish to stock it with, one thing many aquarists focus on is color. One or multiple colorful fish species can really brighten up a tank and form an eye-catching centerpiece.

Many species in the aquarium trade sport beautiful colors, but which are the absolute brightest? Keep reading for 8 super colorful freshwater fish, including both naturally colored and artificially bred species. Although it’s impossible to include all colorful fish, I’ve tried to make a wide selection of different species, colors and funky patterns!

If you’re looking for a colorful freshwater fish species, dwarf cichlids are definitely an option to keep in mind. One of the most popular dwarf cichlids is Mikrogeophagus ramirezi (pictured above), also known as Ram cichlid, a species featuring yellow and almost neon blue coloration on both the male and the female.

Though not the easiest aquarium fish species and not suitable for just any community aquarium, Ram cichlids make a great choice for peaceful soft-water setups. A very large aquarium is not required: a 20 gallon (76L) long setup should be enough to house a pair. Keep in mind that the aquarium should always be fully cycled, as all dwarf cichlids are sensitive to bad water quality.

If you’re interested in keeping dwarf cichlids but aren’t crazy about blue and yellow, there are many other super colorful species to consider. If you’re looking for something a little more orange or red, Apistogramma cacatuoides or Apistogramma hongsloi might be worth looking into! A list of five peaceful dwarf cichlid species can be found on Aquariadise here.

When thinking of killifish, most aquarists only consider popular species commonly found in pet- and aquarium stores, like the striped clown killi. However, there’s a whole other range of killies usually not considered: annual fish that have adapted to the dry seasons in their natural habitat and only live for up to a year. Not an ideal choice if you’re looking for fish to enjoy for years to come but most definitely something to look into if you want crazy colors.

My personal favorite, the bright orange and neon blue Nothobranchius can be bought in egg form like most annual killies and hatched at home, where they can be kept aquariums of 15 gallons (57L) or more. This species is unfortunately very short lived, but luckily they breed readily. Just save the eggs for a few months until the parents pass away and repeat the entire process infinitely!

Almost all gourami species are very brightly colored, making them a great choice for anyone setting up a peaceful community aquarium and looking for that one centerpiece fish. The most common gourami species in the aquarium trade is probably the dwarf gourami (Trichogaster lalius) and its colors are most likely to blame for its popularity.

A combination of neon blue and orange makes the dwarf gourami a real eyecatcher and this fish has the added bonus of staying relatively small and doing well in community setups as long as they’re peaceful and densely planted.

If you’re a gourami fan but looking for something a little less common than dwarf gourami, there’s also the bright blue three spot gourami (Trichopodus trichopterus), the lovely yellow honey gourami (Trichogaster chuna) or even the spectacularly striped licorice gourami (Parosphromenus deissneri). A (non-exhaustive) list of gourami types can be found on Aquariadise here.

Their common name is no coincidence: all rainbowfish species are not only brightly colored but have unusually iridescent scales, which makes them a great option for anyone looking for a pop of color in their aquarium. Because rainbowfish of similar size can be combined as long as the aquarium is large enough, it’s easy to create an entire rainbow! My personal favorite is the red rainbowfish (Glossolepis incisus), a deep red schooling species unsuitable for smaller tanks due to its active nature.

Other beautiful rainbowfish to consider for their color are Boeseman’s rainbowfish (Melanotaenia boesemani) and forktail rainbowfish (Pseudomugil furcatus), which is slightly less bright but smaller than the previously mentioned species and therefore a better option for smaller aquariums.

If there’s one species that can’t be missed on a list of colorful aquarium fish, it’s the humble guppy. This little livebearer has been the start of the hobby for many aquarists and remains ever popular due to the males’ many colors and patterns, which are constantly being bred to new crazy heights.

It’s not just their color that makes guppies such a great choice to brighten up an aquarium: they are also very active and display interesting behavior towards each other. Due to their popularity they are often the victim of improper care, so be sure to have a look at the guppy caresheet if you want to keep them.

If you’re interested in keeping guppies but aren’t too fond of the artificially bred fancy guppy, don’t despair. Poecilia wingei, also known as Endler’s guppy, are usually much closer to their wild form. While their colors and patterns aren’t as over the top as those of fancy guppies, they are definitely not dull and still a great choice for anyone looking for a pop of color.

When it comes to colors, it’s hard to beat the tetra family with its many lovely looking cousins. Probably the most colorful of them all is the neon tetra (Paracheirodon innesi), which derives its common name from the almost glowing stripe of blue that runs along its side. This little schooling fish is a great choice for anyone looking for a relatively easy fish to really brighten up an aquarium, as they are peaceful and don’t require very large tanks. A full neon tetra caresheet can be found here.

If you’re looking for a colorful tetra species but aren’t too fond of neons there are many other options to choose from, like the rummynose tetra (Hemigrammus rhodostomus) with its striking red face or the bright orange ember tetra (Hyphessobrycon amandae). A school of any of these makes a great centerpiece for the middle layer of a peaceful community setup.

If there’s one fish suitable to end this list with, it’s the beautiful Betta splendens. With many breeders throughout the world working hard to keep producing more and more interesting color variations there’s a betta for everyone. They make good beginner fish and can be kept in smaller tanks (at least 5 gallons), preferably with plenty of plants and other hiding places.

The downside of Bettas is that they’re not good community fish, which really only makes them an option if you’re looking to set up a single-species tank or choose from a limited number of tankmates. There are many misconceptions about betta care out there, so be sure to have a look at a caresheet before falling for those amazing colors.

If you’re interested in keeping bettas but not too fond of the artificially bred Betta splendens, there are some wild species to choose from that feature very bright colors as well. The red and blue Betta imbellis or bright red Betta brownorum might be your thing! You can find a more extensive list of wild Bettas here.

If you have any more suggestions for colorful fish or want to share your experience with any of the fish on this list, don’t hesitate to leave a comment below. Happy fishkeeping! 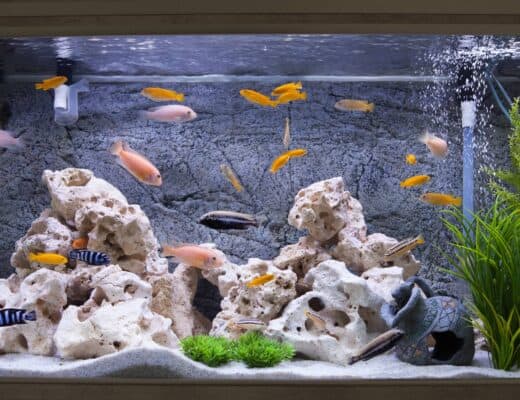 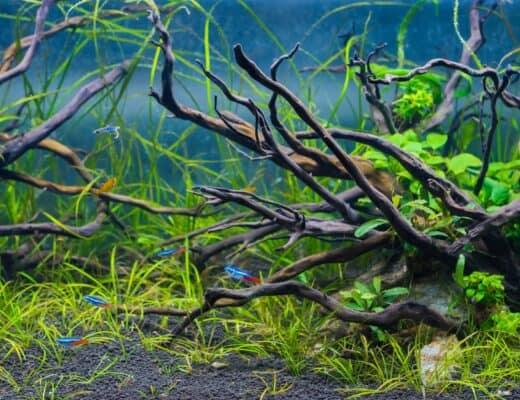 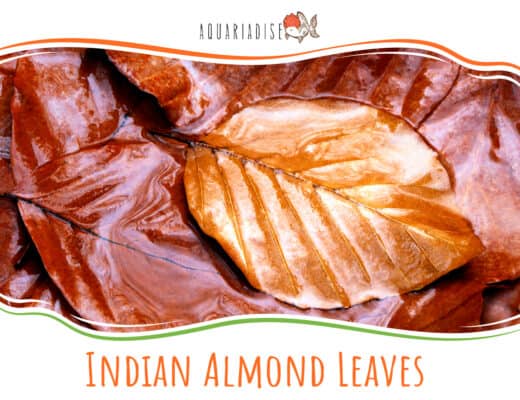 Indian Almond Leaves | How And When To Use Them!