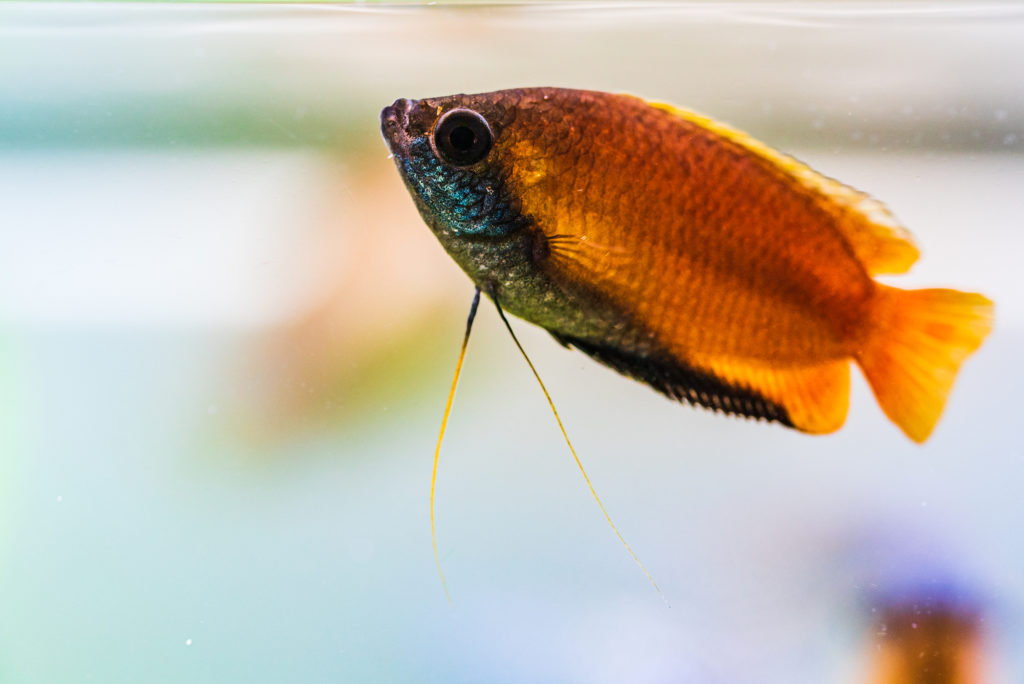 The Honey gourami is one of many different gouramis, and a school of these pretty little golden fishes can make a lovely addition to a peaceful community tank.

Gouramis are generally straightforward to care for and are a good choice for a beginner to the hobby. In this article, we show you how to choose a tank, set it up perfectly for these delightful fish, and provide them with the care that they need to thrive.

The fish was initially described by Buchanan and Hamilton in 1822, who discovered the species in South Asia, ranging from the Gangetic provinces, in Nepal and Bangladesh, and from Manipur and Assam in India. Originally, Hamilton described male and female Honey gouramis as two different species. Males were named Trichopodus chuna and females, Trichopodus sota.

In 1923, Myers wrote a paper that caused the fishes’ generic name, Colisa, to be used to describe the smaller western variety of gourami. However, that was reviewed in 2009 with the result that all species that were placed under the genus, Colisa, are now classified as Trichogaster as per Schlinder and Topfer and Kottelat and Tan.

The Honey gourami is widespread throughout its range, and there are no significant habitat or environmental threats. Therefore, the Honey gourami is listed on the IUCN Red List as being of Least Concern. Most of the specimens that you find in fish stores are raised commercially, rather than being wild-caught. Consequently, several ornamental strains have resulted from selective breeding and you’ll find them for sale under the following names:

All those names are also used to describe color morphs and hybrid variants of Trichogasta chuna and Trichogasta lalia.

These fish live at low altitude in the tropical environs of the Far East, inhabiting ponds, lakes, rivers, ditches, and flooded fields. The fish prefer soft, slow-moving water that’s lush with thick vegetation. Honey gouramis are omnivorous, feeding on small invertebrates, zooplankton, and insects, as well as some plant matter. The fish have an interesting hunting tactic that involves squirting water at insects resting on overhanging vegetation. By using sudden contractions of their mouths, the gouramis shoot drops of water at their prey, dislodging it from its perch and into the water, where the waiting Honey gourami snap it up.

The Honey gourami is a stunning fish! Its body is typical of most of the gouramis, being somewhat compressed and narrow. The fish’s ventral fins are long and threadlike, bearing touch-sensitive cells that the fish uses to explore its environment.

Gouramis have a labyrinth organ, which enables the fish to “breathe” oxygen from the air by taking gulps of air from the water surface. The oxygen is absorbed directly into the fish’s bloodstream, helping it to cope during droughts and dry seasons.

Honey gouramis are the smallest of the genus, reaching a length of just over three inches in the wild, although captive specimens are generally a little smaller than that. Honey gouramis live for between four and eight years on average if they are given the correct care and a good diet.

There are a few selectively-bred varieties that come in either gold or red color morphs, including the stunning Red Flame Honey gourami that boasts bright blue dorsal fin. Interestingly, it’s often these artificially created forms of the Honey gourami that are sold in pet stores because they hold their coloration better.

Honey gouramis are hardy, peaceful fishes that make a great choice for beginner aquarists. These fish are easy to care for, happily eating most regular tropical fish foods and not being too fussy when it comes to water parameters.

One word of caution; recent years have seen some hormone-treated, diseased, and artificially dyed specimens coming onto the market from commercial breeding operations in the Far East. For that reason, a quarantine period of 14 days is recommended if you decide to buy these fish.

The Honey gourami is a schooling species that is happiest when kept in a group of at least four fish. That said, you can keep one single specimen in a tank of at least 5 gallons. However, two fishes or a small group will need a 20-gallon tank or more.

These fish swim in all areas of the water column, especially in the upper and middle areas. That means that the shape of the tank is not too critical, as long as there’s plenty of swimming space available for the fish.

Honey gouramis are very hardy and not especially sensitive to water conditions. That said, gouramis still suffer the same stress and vulnerability to diseases as any tropical fishes if you don’t maintain their tank properly. Carry out weekly water changes of at least 25% to keep the environment fresh and hygienic for your fish.

If possible, we recommend that you keep the aquarium in a room where the air temperature is as close to that of the tank water as possible to protect the gourami’s labyrinth organ. The filter should produce just a gentle current, and air stones are recommended, as gouramis prefer water that’s well-oxygenated.

Honey gouramis are shown to their best against a substrate of a dark color. These fish prefer a tank that has lots of hiding places where they can feel secure and hide away if they want to. In their natural habitat, Honey gouramis enjoy the cover of dense vegetation and floating plants, so you can replicate that in your tank. However, because these fish are labyrinth breathers, you must make sure that there’s plenty of open water surface that’s easily accessible. The addition of some rocks and driftwood may also provide hiding places for these shy tropical fish.

Your gouramis will thrive under moderate to normal lighting, and so will your plants.

In captivity, the fish will take flake, fresh, freeze-dried, and frozen foods. To ensure that your fish remain in good health, feed them a balanced, varied diet that consists primarily of flakes or pellets supplemented with portions of live, frozen, or freeze-dried foods as a treat. Live foods that are well-received include bloodworms, white worms, brine shrimp, and daphnia. You can ensure that the fish receive a portion of vegetable matter by feeding them tablets or offering lettuce, de-shelled peas, or cucumber.

Honey gouramis are peaceful, community fishes, but they are quite shy, and they’re not the fastest of swimmers, so don’t put them with tankmates that are overly boisterous or aggressive. Territorial species, such as cichlids, should also be avoided. Like most dwarf gouramis, the Honey gourami likes to live in a small group of between four to six individuals. Males will become slightly belligerent during spawning, and they often establish a pecking order of sorts within the shoal.

Suitable tankmates are peaceful species, including:

Breeding Honey gouramis is relatively easy. These fish are bubble nest builders and can be bred in pairs or small groups. Unlike Dwarf gouramis, the Honey gourami forms a bonded pair, and males are tolerant of females that are hesitant to spawn.

A 10 or 20-gallon breeding tank is perfect, but make sure that you keep the water level low at around 6″ to 8″ only. Water parameters should be around 8° dGH, with a water temperature of between 80° – 84° Fahrenheit. A small air-powered sponge filtration unit or some peat filtration media is best.

Fill the spawning tank with stem plants and floating plants too that provide surface cover under which the fish can construct a bubble nest. Keep the tank warm and humid t protect the fishes’ labyrinth organs.

Bring the fish into prime breeding condition by providing them with frozen and live food two to three times each day. When ready to breed, the female fish should fill out and become plump with eggs. When the male has constructed a bubble nest, he will begin to show his bright courting colors.

Males swim toward receptive females, displaying and encouraging the females to follow them to the bubble nest, where spawning begins.

The female releases her eggs, and the male fertilizes them immediately. The male picks up the fertilized eggs in his mouth and puts them into the bubble nest. Around 20 eggs are produced per spawn, and the paid will continue to breed until around 300 eggs have been laid. To keep the eggs in place in the nest, the male spits water droplets above the bubbles, forcing them down into the water so that he can rearrange them back into the nest.

Once the couple has finished spawning, remove the female to stop the male from chasing her. Until the eggs hatch, the male will guard them and continue to tend the bubble nest. The eggs will hatch after one or two days, and the adults should then be removed. For the first few days, the fry will feed on the egg sacs. Once the youngsters are free-swimming, they will take infusoria or liquid fry food. When the fry is large enough, you can feed them baby brine shrimp.

True Honey gouramis and selectively bred colored varieties are usually easy to find in fish stores or online and are generally priced at a few dollars per fish. You can pay less if you buy pairs of fish, and females are often cheaper because their colors lack the vibrancy of the males’.

These fish are generally very hardy provided that you learn about the correct Honey gourami care and keep the aquarium well-maintained and clean.

One disease to which Honey gouramis are prone is Velvet disease, which appears as golden or brown dust over the affected fishes’ fins and body.

Velvet disease is caused by the parasite, Oodinium pilularis, which damages the fish’s mouth, skin, and gills. You can treat the condition with an over-the-counter broad-spectrum antibacterial treatment that you add to the tank water as per the manufacturer’s instructions.

Anything that you add to the tank has the potential to introduce disease, parasites, or bacteria to the environment. All new fish should be placed in a quarantine tank for at least 14 days and observed closely for signs of disease before you put them into your main display tank. Plants, new substrate, and decorations must all be rinsed through in clean water before you add them to your main aquarium.

In recent times, Honey gouramis have been commercially bred in the Far East and treated with hormones and colored dyes. Also, some of these fish carry a virus, so you must quarantine them, as mentioned above.

The Honey gourami is a delightful little fish that can make a great addition to any peaceful community tank setup. These pretty fish are very easy to care for and are also very hardy, so they’re a good starter fish for a beginner.

Keep your Honey gouramis in a small group, provide them with plenty of dense planting and hiding places, keep the tank well-maintained, and you’ll be rewarded with up to eight years of enjoyment.