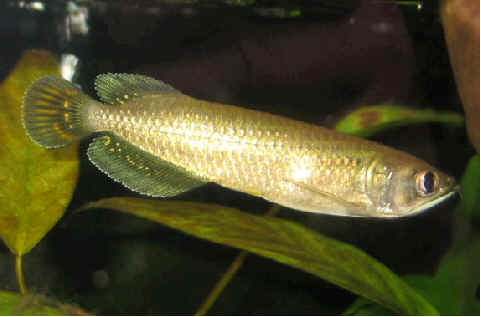 If you’re looking for a large, unusual addition to your tank, you might want to consider the mysterious Jardini Arowana.

In this guide, we provide an overview of what to expect if you take on one of these unusual giants. First of all, let’s find out more about this stunning fish.

What is a Jardini Arowana?

These fish are aggressive carnivores that can grow up to 24 inches long in captivity, tipping the scales at an impressive five pounds or more, and are best left to the care of experienced hobbyists. Most of the fish that you’ll find for sale are taken from captive breeding programs.

Origins of the Arowana Scleropages Jardini

These fish are indigenous to the Adelaide and Jardine Rivers in Northern Australia, where they live in varied habitats from fast-flowing streams to still billabongs. The species is also found widely distributed across Oceana and in Central and South New Guinea.

The Arowana is a powerful predatory fish whose origins can be traced back to prehistoric times, earning them the name “living fossil.” Wild Arowanas can grow to be up to 40 inches in length and are formidable predators, inhabiting the top to the middle areas of the tropical waters in which they live. Indigenous people often catch and eat the Silver Arowana.

Thanks to their unique hunting technique of hiding, stalking, and leaping right out of the water to grab small animals and insects from overhanging or nearby vegetation, these fish are nicknamed “water monkeys.”

These fish are highly active, prowling around the aquarium just beneath the water surface, always on the lookout for likely victims.

The Arowana has a long, flat body with large eyes that they use for accurately sighting their prey when hunting. The body is silver-gray to greenish-yellow and is streamlined with seven rows scales with pink-orange colored edges. Each scale on the fish’s sides has a red spot. In older specimens, the throat is golden orange to red in color, and the fish’s barbels have a greenish-blue tint. The finnage has a darker, metallic coloration with orange to pink spotting.

The Silver Barramundi has a large, oblique mouth that’s lined with small teeth, which are strongly rooted in the fish’s tongue, pharynx, jaw, and palate. Barramundi also has forked barbels on the tip of the lower jaw that the fish uses for sensing activity on the water surface that might indicate the presence of prey.

This is not a fish for a beginner to take on, largely because of their size and aggressive temperament.

As the Jardini can grow up to 24 inches in length, you’ll need an aquarium of at least 180 gallons to accommodate one of these monsters.

Your tank must have a tightly-fitting, secure lid. These fish are spectacular and accomplished jumpers and will readily leap right out of the tank if tempted by anything they perceive to be a potential prey item.

The Scleropages Jardini is very sensitive to water quality and chemistry, preferring water with a pH between 6.0 and 7.0 and KH of between 2 and 4.

The water temperature should be between 760 and 850 Fahrenheit.

You’ll need to carry out 15% to 25% water changes every week or so, depending on the efficiency of your filtration system.

Jardini Arowana Scleropages like a gravel or sand substrate. Be sure to include driftwood in your aquascape to help maintain a lower pH level, and include some free-floating plants, as well as some of a species that will attach to the driftwood. Although some Barramundi will tolerate rooted vegetation, many won’t, and will pull up your carefully planted greenery with relish!

Arowanas are solitary, territorial fish, although they have been known to share their space with large Manguense, predatory catfish, big Oscars, Tinfoil barbs, Knifefish, and Giant Gouramis.

Large cichlids can bully immature Australian Arowana. However, once the fish reach the eight to 12-inch size, they usually become highly aggressive toward all the other residents in their tank, especially those that are of a similar size and shape. For that reason, it would be folly to include any small, shy fish or invertebrates, as they would soon become dinner for the Arowana.

So, generally, these large predators are better off kept alone.

Members of the Osteoglossidae family to which the Silver Arowana belongs are generally extremely hardy and rarely become sick. However, if the fish grow to their full size, health conditions may develop if the water conditions are allowed to deteriorate due to accumulations of fish waste and rising ammonia and nitrate levels.

The Jardini Arowana is a carnivore that needs foods that are high in meaty protein. Arowanas usually only eat live food, such as bloodworms, blackworms, earthworms, crickets, frogs, minnows, ghost-shrimp, and crayfish. However, some will eventually learn to take vitamin-enriched frozen foods and may also like Arowana/Cichlid sticks or pellets.

You should not feed your Arowanas feeder goldfish. Feeder goldfish can carry diseases to which the Jardini Arowana may be susceptible. It is, therefore, best to stick to the live food types that we have mentioned above.

Feed young fish twice a day, reducing that frequency to just once a day as the fish mature.

The Arowana Scleropages Jardini is an egg-laying mouthbrooder. Unfortunately, breeding these fish in an aquarium is extremely difficult, and you would need a tank of over 600 gallons to be successful.

Wild Arowanas begin spawning when the wet season arrives. The fish pair-off and the female will lay between 50 and 200 eggs. Once the eggs are fertilized, the male fish carries the eggs in his mouth until they all hatch. After hatching, the fry remains with their father for around four to five weeks. When the young fry is threatened, the father fish opens his mouth to allow the young to take shelter.

The Jardini Arowana can be found at good fish stores, but they are not as easily available as their cousin, the Silver Arowana.

A search online may locate specimens for sale, although you will need to pay shipping costs, which could push up the price of your fish.

In this section of our guide, we answer some of the questions that people ask about keeping the Jardini Arowana as a pet.

Q: How big do Jardini Arowana get?

A: In the wild, Arowana can grow to measure 40 inches long. However, in captivity, the average size you can expect your pet to achieve is around 24 inches.

Q: What do you feed Jardini Arowana?

A: Arowanas are carnivorous, preferring to eat exclusively live food. That said, some captive specimens will eat frozen foods, including bloodworms, brine shrimp, and the like.

A: Yes. The Arowana is a very skilled and athletic jumper. In the wild, the fish predate on small animals and insects by leaping out of the water and snatching their prey from overhanging branches. So, you’ll need to have an aquarium that has a tightly fitting lid if you want to keep this species safely contained.

A: Captive Arowanas can live for in excess of 20 years. So if you want a new lifelong hobby, taking on one of these beautiful fish could be the solution.

The Jardini Arowana might not be the most popular choice of tropical fish, but one of these prehistoric-looking creatures would certainly make an interesting addition to a large aquarium.

You will need to pay close attention to maintaining good water quality in the aquarium to keep your fish healthy, and breeding them in captivity is not an option for the hobbyist unless you have an 800-gallon plus tank. Take care to provide your fish with the best quality live food to maintain good health, and you could enjoy one of these fascinating fish for 20 years or more.