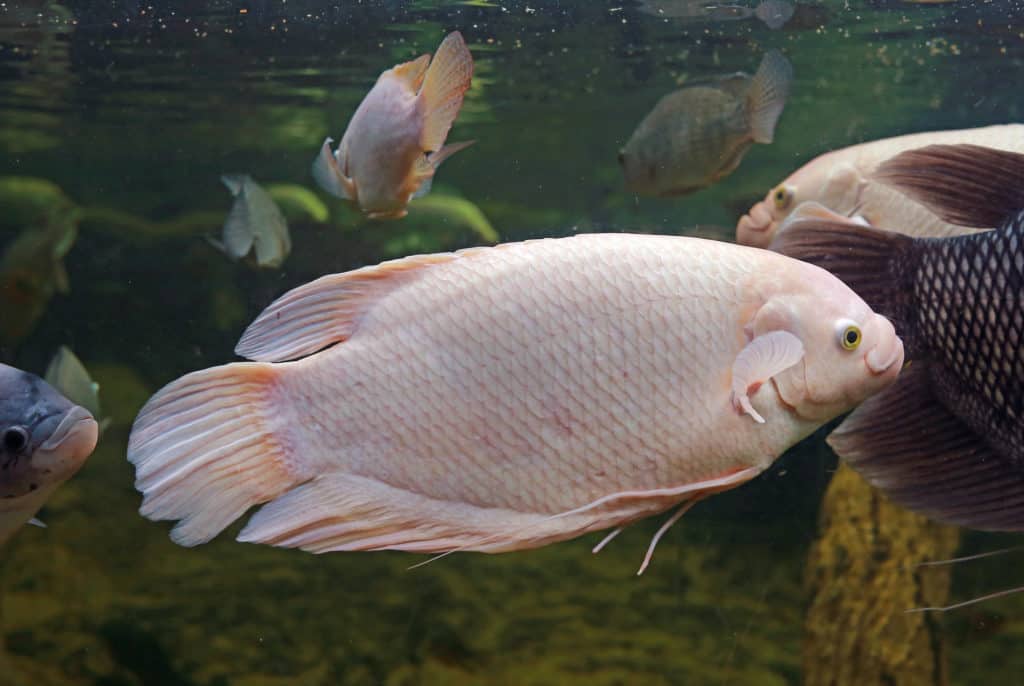 All species of gourami are popular with hobbyists for their looks and for their peaceful, amenable temperament, making them ideal for a community aquarium setup. Also, these fish are easy to care for, so beginners can enjoy them too. However, gourami Osphrenemus goramy is more challenging to keep, mainly because of the massive size they can reach.

The Giant gourami is the largest of the gourami family and makes a spectacular addition to a very large tank. In this article, we profile the Giant so that you can see whether one of these big guys would be suitable for your setup.

About the Giant gourami

Giant gouramis are also known as the Common or True gourami and the Osphronemus goramy, being members of the Osphronemidae family of tropical freshwater fish. Like all gouramis, these are labyrinth fishes that have the ability to breathe air at the water surface, which they do from time-to-time in the aquarium.

In the natural environment, these fish have been known to grow to a length of up to two feet. In captivity, Giant gouramis generally make around 16 inches, and very occasionally 18 inches long.

This species of gourami is thought to have originated in Borneo, Java, Sumatra, and other islands in the Malay Archipelago. The fish are also found in the Lower Mekong Basin, Thailand, Vietnam, and Thailand, as well as India, Singapore, and Eastern India.

Today, the fish thrive throughout Southeast Asia, where they are affectionately known as Water Hogs and are farmed as a food fish.

You’ll also see a few of the largest specimens on display in public aquariums.

The gourami Osphronemus goramy is one of four varieties in the genus, and all four of the Giant gourami species are very similar in shape and size.

The Giant Red Tail gourami can reach a length of 20 inches and is sometimes found in the aquarium trade, although you will most likely have to order one from an online supplier that has that species of Giant gourami for sale.

The largest of the Giant gouramis is the Elephant Ear gourami, growing up to two and a half feet long in some specimens. The other species is the Kaloi Sarawak Giant gourami.

The habitats are usually clogged with heavy vegetation, and the fish will eat both animal and plant matter, including earthworms, frogs, fish, aquatic plants, and even dead animals.

Giant gouramis for sale in fish stores are usually sold when they are about one to three inches in size. So, if you buy one of these beauties, remember that the cute little fish you’re taking home will potentially grow to reach 16 inches in size!

As juveniles, the fish have flat heads, pointed snouts, and attractive banded coloration. The fish’s body is cream to yellow-gold with silvery gray-blue stripes. As the fish mature, the stripes fade, leaving behind the creamy base color, although some specimens turn completely black. Adult fish, especially males, develop a “nuchal hump” or swelling on their forehead. The fish’s chin thickens, as do the lips, which are more pronounced in females.

The fish’s ventral fins are thin and threadlike, and the male has a pointed dorsal fin, whereas the female dorsal is more rounded in shape.

Giant gouramis reach their full, adult size when they are around four to five years old and can live for up to 20 years.

If you go shopping for Giant gourami Osphronemus goramy online, you may come across some colored specimens for sale.

Unfortunately, albino fish and those with that type of coloring make the perfect “canvas” for the application of color to produce what appears to be a highly unusual variant. Several methods are used to apply color to the fish, but one technique involves injecting colored dye under the fish’s skin. That undoubtedly causes stress to the fish and may even be painful for it, not to mention the danger of infection.

It’s also thought that that kind of artificial coloring can even shorten the lifespan of the fish. So, as a responsible aquarist, you should avoid buying a Giant gourami that is any color other than what’s natural for the species.

Care of the Giant gourami

Giant gouramis are easy to care for, provided that you give them the environment that they need.

These are big fish! Juvenile specimens will do fine in a 30-gallon tank, but an adult needs an aquarium of at least 200 gallons, larger if the Giant gourami is to be a member of a community.

To aid oxygen availability in the fish tank, choose a long tank that has a correspondingly large surface area, rather than a tall, narrow one. Also, these fish inhabit all areas of the water column, and they do need plenty of space to swim.

Giant gouramis are not only large fish, but they are also very active. So, don’t have too many decorations and avoid placing them where the open swimming space would be obstructed.

A dark-colored substrate will help to bring out the fish’s colors, and a few pieces of rock or some driftwood look good too. Place a few robust plants around the edges of the tank or floating on the surface to create a natural-looking environment that will show off your fish. Choose fast-growing varieties of plants, as the Giant gourami Osphronemus do tend to eat vegetation.

The Giant gourami is a freshwater fish species with a voracious appetite. That, coupled with their large size, means that these fish produce a lot of waste, so you will need a powerful and efficient filtration system to keep the ammonia, nitrite, and nitrate levels down in the fish tank. Also, you’ll need to clean the substrate each week with a gravel vacuum and carry out a 30% to 50% water change too.

These are one of very few labyrinth fish that will tolerate slightly brackish conditions. However, these fish are not suited to life in a full brackish aquarium. If you do need to keep your specimen in brackish water, acceptable parameters are less than 10% salinity of a normal saltwater tank and a specific gravity of less than 1.0002. Again, water changes of at least 25% per week will be required to keep the environment clean and sanitary.

To replicate conditions in the wild environment, the water flow in the aquarium should be kept moderate to slow.

The gourami Osphronemus goramy is a tropical fish that needs a water temperature of between 68.0° to 86.0° Fahrenheit. Note that it’s important to keep the surrounding room temperature consistent with the temperature of the aquarium water to avoid causing any trauma to the fish’s labyrinth organ.

Captive specimens will eat pretty much all types of food. To ensure that your fish thrives, feed a high-quality diet of pelleted or flaked food every day. You can offer the fish boiled potatoes and other vegetables, as well as beef heart occasionally. Bloodworms and brine shrimp in either live or frozen form can be fed as a treat.

Although the Giant gourami is not a fussy feeder, it’s a good idea to train your fish to accept regular fish food as soon as you get him.

Feed your fish once or twice each day.

The Giant gourami Osphronemus can grow into a friendly fish that may eventually come to you and allow you to pet it. Wild Giant gouramis are pretty much loners, rather than schooling fish. So, keeping one specimen alone will not cause the fish unnecessary stress.

Giant gouramis can make good community fish if kept with other large fish and are relatively peaceful. Adult specimens generally only become aggressive if the tank is too small. Also, the Osphronemus goramy sometimes doesn’t react well to new additions to the tank, although they do get on fine with fish that they’re raised with.

Start your collection with a mixture of large catfish, knifefish, and Loricariid plecostomus catfish.

This species is quite easy to breed, although you do need a super-sized fish tank to be successful.

The Gourami Osphronemus goramy reaches breeding size at around six months of age when the fish measures around four inches in length.

Like most gouramis, the Giant variety is a bubble nest builder.

Although encouraging the fish to spawn is not difficult, the provision of a large enough breeding tank is likely to be your greatest challenge. Fortunately, the fish reach maturity and are able to breed from about six months of age, when they measure between four and five inches. However, they will still require a huge breeding tank.

In the wild environment, the male Giant gourami Osphronemus goramy builds a spherical nest from fragments of plants. The nest hangs suspended just below the surface of the water, anchored to reed stems, and usually measures around 16 inches wide and 12 inches deep. The nest has a round entrance of around four inches diameter that is angled toward the deepest area of the water.

Nests are usually built in April and May, although breeding happens throughout the year and is not seasonal. It can take the male fish a week to ten days to build his nest.

The eggs are extremely light in weight and float to the surface. The male collects the eggs in his mouth and places them carefully into his nest. The eggs usually hatch very quickly after only about 40 hours. The male remains close to the nest to guard the fry against predators for about 14 days, often driving the female away in the process.

Once the fry is free-swimming, they will hide among the vegetation until they are large enough not to be eaten by predatory fish.

The Giant gourami is a very hardy fish that doesn’t generally succumb to disease as long as the aquarium is well-maintained.

That said, these fish can be prone to a few diseases, including bacterial infections, constipation, and Hole in the Head disease. All these problems are usually caused by poor water conditions or incorrect feeding. In short, if you care for your fish correctly, health problems should not be an issue for this species.

When adding new fish, substrate, or decorations to your aquarium, you risk bringing disease into the tank.

So, all new fish should be quarantined for two weeks before introducing them to your display tank. Plants, ornaments, and substrate should be rinsed through clean water that contains an aquarium anti-bacterial treatment.

The Osphronemus goramy is widely available through aquarist stores, and you can buy the species online from specialist dealers.

The cost of these fish largely depends on their size, and you may even find some specimens that have outgrown their tank and are being given away by desperate owners. However, the cost generally ranges from $35 to $75. If you buy your fish online, you will pay shipping costs too.

In this section of our guide, we answer a few of the most commonly asked questions about the unusual and quirky Osphronemus goramy.

Q: How big does a Giant gourami get?

A: In the wild, the Osphronemus goramy can grow up to two feet long. Captive specimens usually make between 16 to 18 inches long.

A: Generally, the Osphronemus goramy is a peaceful community fish. However, adults may become aggressive toward new additions to their aquarium, and they can be territorial.

A: The Giant gourami grows around one inch per month, depending on the quality of their diet and environment.

Q: Can Giant gouramis live together?

A: In the wild, the Giant gourami Osphronemus goramy is a solitary creature and given their large size, it’s not practical for many hobbyists to keep more than one specimen. That said, these fish can live together if they have plenty of space.

The Giant gourami Osphronemus goramy can make a very unusual addition to the enthusiast’s aquarium, provided that the tank is big enough to accommodate one of these huge fish.