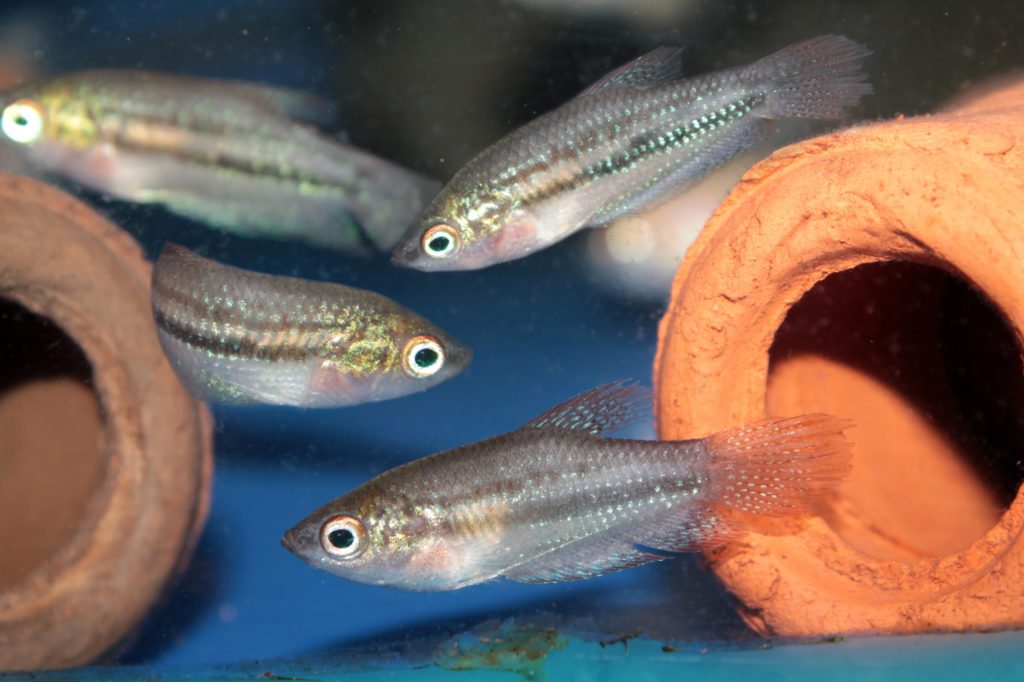 The Sparkling gourami is a beautiful, lively little fish that can make a great addition to a peaceful community aquarium. These fish are relatively straightforward to care for, too, making them ideal for beginners.

Although seldom seen in the home aquarium, Sparkling gouramis can sometimes be found in fish stores and are widely available online for the price of a few dollars per fish. Most dealers will offer deals where you can buy a group of fish for a discounted price.

Here’s a guide to keeping these delightful, unusual fish.

The species was first described in 1936 by Arnold when it was discovered living throughout the Mekong River basin in Vietnam, Cambodia, Laos, and Thailand. Sparkling gouramis are also found in watersheds across the central and southern peninsular in Thailand.

The Sparkling gourami is one of the Trichopsis species of fish that are able to “talk” by using its modified pectoral fin muscles and tendons, which can be stretched and plucked much like guitar strings. By beating its pectoral fins, the fish can produce a short burst of sound. Both males and females can make sounds, generally during courtship or territorial behavior.

Studies have shown that Trichopsis species can use their ability to “speak” to resolve conflicts without physical contact, and when spawning, females make a purring sound that encourages the male to breed. Sparkling gouramis are the only fish species that are known to do that.

The Sparkling gourami grows to measure around 1.5 inches in length, making these pretty fish perfect for a small tank setup. The fish’s body is arrow-shaped with the dorsal fin sitting behind the pectoral fins. The gourami’s scales are iridescent, producing green, blue, and red colors on the body and fins, and there’s a single dark line running along the side of the fish’s body. Above that is a row of dark blotches. The eyes are a dazzlingly bright blue.

Like all gouramis, these fish have a labyrinth organ that enables the fish to breathe by taking gulps of atmospheric air from the water surface.

Sparkling pygmy gouramis are pretty easy to care for, provided that you keep the tank well-maintained.

Thanks to the Sparkling gourami size, a group of these small fish can live in an aquarium of 10 gallons. These are quite active fish that like to swim in all areas of the tank. However, because of the gourami’s habit of breathing air at the surface of the water, we suggest that a long, shallow tank is the best choice for these fish.

You will need to buy a tank that has a well-fitting lid, as these fish are excellent and accomplished jumpers. Also, a layer of humid air is necessary between the water surface and the tank lid or cover slide to protect the fish’s labyrinth organ. When deciding where to put your tank, choose a room where the air temperature is close to that of the tank water, again to protect the gourami’s labyrinth organ.

Sparkling gouramis like a heavily planted aquarium that has lots of hiding places, so you’ll need to include lots of tall stem plants and also some floating vegetation or perhaps tropical lilies. Driftwood and rocks make good choices of decoration, and shelter can be provided in the form of clay plant pots, resin caves, and pieces of plastic piping.

A few handfuls of dried leaf litter can provide additional cover, bringing with it valuable microbe colonies, which become established as organic matter degrades. These microbes can be a good secondary food source for any fish fry, and the tannins that the leaves produce are also thought to be beneficial to the general health of the environment and its inhabitants.

When choosing a filtration system for the Sparkling gourami’s tank, remember that these fish inhabit slow-moving waters in nature, so avoid anything too powerful. An air-powered sponge filter that provides a gentle turnover is fine.

When it comes to water parameters, the Sparkling gourami is very tolerant. The water temperature should be maintained between 70o and 82o Fahrenheit. The water pH range should be between 5.0 and 7.5, with a wide hardness range of between 5 to 19 dH

The Sparkling gourami’s main food source in their wild environment consists of small invertebrates and insects. In captivity, the fish will accept flakes and pellets as a daily staple diet, but you’ll also need to include frozen or live foods as a treat and to provide additional protein.

Feeding such food as artemia, daphnia, tubifex, brine shrimp, and bloodworms can help to boost the fishes’ growth, coloration, and overall condition. These fish are omnivorous, and they will happily eat any algae that may be growing on surfaces within the tank.

To avoid overfeeding that can lead to health problems for the fish, it’s recommended that you feed your gouramis once or twice a day, offering them just enough food that will be cleared in a couple of minutes.

Sparkling gouramis are happiest when you keep them in a pair or a small shoal. These are peaceful fish that can live happily with similar-sized species, as larger, more aggressive fish may bully these shy gouramis or outcompete them for food.

Good tankmates for Trichopsis pumila include small tetras, Corydoras catfish, rasboras, White Cloud minnows. Other species that are suitable for life in a community tank with Sparkling gouramis include Yoyo loaches, Swordtails, and Mollies.

Despite their gentle reputation, Sparkling gouramis have been known to attack small species of shrimp, so it’s best to avoid introducing invertebrates to your setup.

It is possible to breed Sparkling gouramis at home in a separate spawning tank away from their tankmates.

The spawning tank should be set up as a regular, species-specific tropical aquarium, as described above. Make sure that the aquarium has a tightly fitting cover so that the fry can access a layer of humid, warm air to protect the labyrinth organ as it develops. Many breeders use a piece of clingfilm underneath the tank lid to accomplish that.

Choose a healthy pair of male and female fish and introduce them to the breeding tank. The male will most likely construct his bubble nest underneath some broad leaves, in a corner of the tank, or even inside a cave. The fish will embrace beneath the nest, as is typical of all osphronemids. The male curls his body around the female fish, and the eggs and milt are released in small clusters. The male fish collects the fertilized eggs and carried them to his nest. The spawning process continues until the female has no more eggs.

After spawning, you can keep the parent fish in the tank. At this point, the female will leave the male to guard the nest and plays no further role in raising the fry. The male fish tends to the eggs and guards the bubble nest for the next few days until the fry hatches. The fry remains attached to their yolk sacs until the nutritional content has been fully-absorbed.

Once the fry is free-swimming, the male loses interest. Unlike many fish species, Sparkling gouramis don’t generally eat their offspring, so they can be left if the tank with the fry.

The fry can be fed infusoria for their first few days. When large enough, the young fish will take artemia nauplii and micro-worms.

As the fry grows, carry out small, regular water changes to the tank to keep the environment sanitary.

Although Sparkling gouramis are generally healthy and robust fishes, they can be susceptible to a few common fish diseases. The best way to keep your fish healthy is by keeping their tank well-maintained. Also, you should place any new fish in a quarantine tank for at least 14 days before introducing them to your main display tank. Wash any new plants, substrate, or decorations under running water to remove any bacteria, snails, and parasites before you put them in your tank.

Fin rot is a very common fish disease that is caused by the Pseudomonas fluorescens or Aeromonas bacteria. The disease attacks the fish’s fins, causing them to appear ragged and torn.

Infected fish can also appear weakened, lethargic, and often lose their color. Abdominal swelling and loss of appetite are also symptoms of fin rot. Luckily, the condition is relatively easy to treat, as long as it’s caught early. Treat the tank water with an over-the-counter antibiotic that you can get from most good fish stores and keep the tank water within the fishes’ preferred parameters.

Affected fish flick or rub themselves against the substrate and objects in the tank in an attempt to relieve the irritation that the parasites cause. As the parasite’s lifecycle progresses, a rash of tiny white spots appears across the fish’s body, fins, and gills. Victims appear lethargic, their respiration rate increases, and they lose their appetite.

Again, the disease can be treated relatively easily and successfully, provided that it is spotted in time. Ask in your local fish store for a suitable anti-parasitic treatment that is added to the aquarium water.

Cotton Wool disease is highly infectious. The condition is caused by bacteria and fungus and commonly affects fish that are already weakened by disease or poor water conditions. Healthy fish have a degree of protection from the disease thanks to a layer of mucus on their skin, but when that is compromised when the fish is sickly.

As the name suggests, Cotton Wool disease manifests as growths of white or grey cotton-like growths on their fins, mouth, and body. The fish’s fins appear frayed, ulcers may develop on the body, and the fish stops eating. There are antibacterial medications that are available online or from your local fish store that are very effective against the condition, provided that it is treated early.

Although it is an unusual fish that’s seldom seen in the home aquarium, you can find the Sparkling gourami for sale fairly widely from good pet stores and online dealers.

Prices vary from a few dollars, and you can often get a good deal if you buy several fish as a group. Remember that you will pay more if you buy online, as you’ll also need to cover the cost of shipping. Also, you won’t be able to view the fish before purchase, so always make online purchases from dealers with a good reputation for providing high-quality stock.

If you’re looking for something a little bit different to add to your aquarium, the Sparkling gourami could be just what you need. These fishes are an unusual member of the wider gourami family that is also known as the Pygmy gourami because of its tiny size.

Sparkling gourami care is pretty straightforward, provided that you give this beautiful, enigmatic aquarium fish plenty of hiding places and provide them with the right water conditions. The fishes’ small size means that you can keep them in a small aquarium of around 10 gallons, or larger if you want to keep groups of these peaceful gouramis together with other tankmates