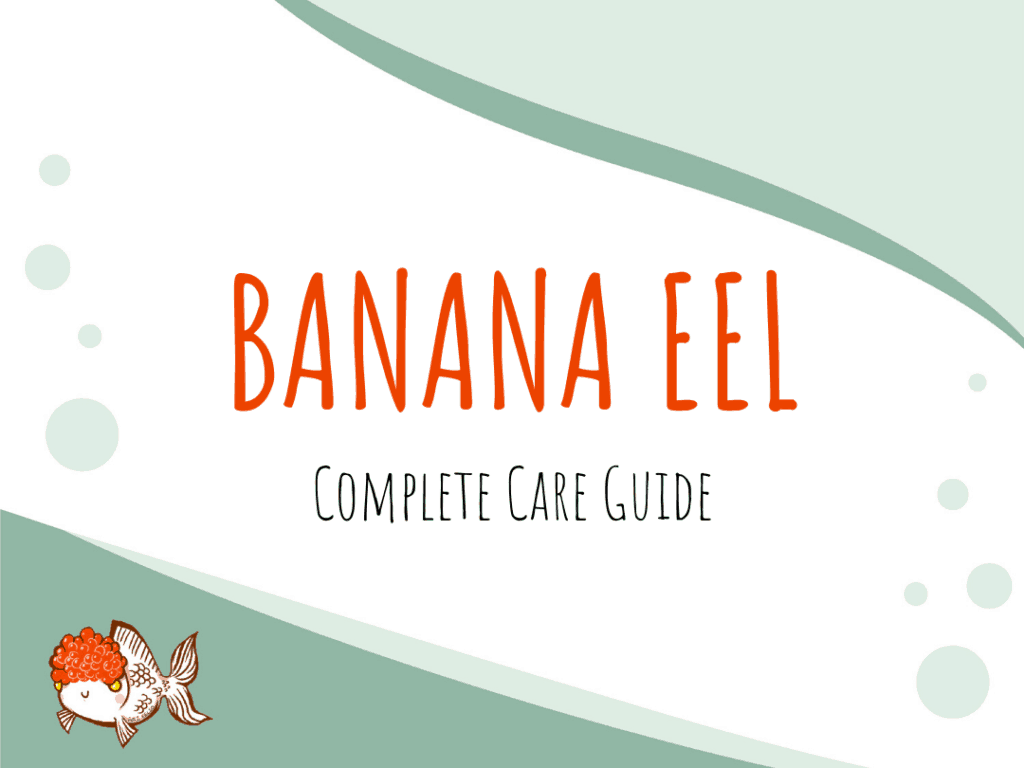 An eel might not be your first choice when it comes to choosing a new fish for your marine tank. However, if you are an experienced hobbyist, and you’re looking for something different, one of these unusual, eye-catching creatures might be worth considering if you can find one available to buy.

In this comprehensive guide, we take a closer look at how to care for one of these monsters of the deep in your home aquarium.

What is a banana eel?

Banana eels, scientific name gymnothorax miliaris, are one of 200 species of Moray eels and is thought to be the rare yellow form of the Fire Coral eel. Moray eels (Muraenidae) all belong to the Anguilliformes family of fish.

Also known as Golden Banana Moray eels, these spectacular creatures are found living around the reefs off the South American coast. Wild specimens can grow to a length of around two feet, although most tank-kept eels don’t reach that size. After the Dwarf Moray eel, the Banana eel is the second smallest variety of Moray.

As their name suggests, the Banana eel is bright yellow from head to tail with black markings along the top part of the body, including the dorsal fin. That makes this variety of Moray look exactly like a ripe banana that you see in your local grocery store.

Moray eels have very poor eyesight, relying on an acute sense of smell to detect prey. Although often taken to be an aggressive or threatening stance, a Moray’s mouth is almost always gaping open so that the fish can circulate water through its gills, enabling the eel to breathe.

Thanks to their narrow head, eels are unable to generate sufficient pressure to swallow prey. To solve that problem, these remarkable creatures have evolved to have a second set of pharyngeal jaws that are brought to the front of the eel’s mouth to grab food and drag it into the body.

Eels don’t have scales. Instead, eels have very tough, thick skin that is covered with slimy mucus. The mucus is thought to provide the eel with protection from bacteria and discourage parasites. In the wild, cleaner wrasse eat the mucus, and the substance also works to bind sand grains together, helping sand-dwelling Morays to create burrows. The mucus contains toxins, which won’t harm your eel’s tankmates but will make its bite extremely painful should you become a victim.

Care of the Banana Moray eel

Given the cost of acquiring one of these stunning creatures, you’ll want to know how to give your new eel the very best care so that he will thrive and live out his full life expectancy of 12 to 15 years.

The most crucial point to note when choosing a tank in which to house your Moray eel is that the aquarium must have a capacity of at least 100 gallons, ideally more. These are large ocean-dwelling fish that need plenty of space, and for that reason, you should pick a tank that’s longer than it is tall.

Morays are reef specialists, using the crevices and caves of their natural habitat for shelter and for ambush hunting. So, you’ll need to include plenty of rocks, caves, and thick planting to keep your eel happy. Be sure to fix the rocks together well with aquarium glue so that the eel doesn’t deconstruct your handiwork.

Another extremely important thing to know is that Morays are card-carrying escape artists. So, you must make sure that your tank has a cover slide and a very securely-fitting lid. It’s also recommended that you weigh down the lid so that your eel can’t push it off. Also, you must seal cutouts around filtration cords and wiring, as eels will squeeze through surprisingly small gaps.

Moray eels can survive out of water for quite a few hours, but they can also inflict a severe bite, and you don’t want to have to pick your pet up if you find it wriggling around on the floor of your living room!

When it comes to choosing a substrate, it’s common for many hobbyists to decide to keep a bare-bottomed tank because eels can produce a lot of waste. However, sand or very fine gravel makes for better aesthetics, and you may find that your eel likes to bury itself in the substrate too.

A Moray eel generates a lot of waste, so you will need a very efficient filtration system to cope with that and keep the water clean and clear.

Banana eels like fairly broad water parameters and should do well in most standard marine aquarium setups. Keep the pH level between 7.6 and 8.4 with a salinity of 1.022 to 1.025 and a water temperature of around 740 to 790 Fahrenheit.

Banana eels eat fish, invertebrates, and crustaceans. Also, this variety of Moray eel has a reputation as one of the most aggressive, so you must choose any tankmates very carefully.

These eels are usually sold when they measure between five and 12 inches in length. That means you can keep one in a 35-gallon tank for a short time before transferring it to a larger aquarium once it has outgrown its first home. However, Banana eels grow rapidly and may regard smaller tankmates in a larger aquarium as fast food!

The best tactic is to keep a few large fish species with your eel while it is small. That can help to acclimate the eel to having fish in the environment. So, when you transfer the eel to a larger tank, it won’t be fazed by having fish swimming around the habitat. Just be sure to include large, semi-aggressive fish types to counterbalance the eel’s temperament.

Cleaner wrasse make suitable smaller tankmates, as do large groupers and lionfish Do not keep two eels of the same or different species together. Moray eels are territorial and will fight over food too.

Wild Moray eels are nocturnal ambush predators. However, if you persevere, your eel will become accustomed to being fed during the daytime.

Banana eels are exclusively carnivorous, eating a diet of crustaceans, invertebrates, and smaller fish. In captivity, it’s easier to feed frozen or fresh food, as live food can be tricky to get your hands on in the quantities you’ll need to keep your eel satisfied. Also, it’s not possible to wean eels onto flake or pellet food, so fresh or frozen is the way to go.

Moray eels should always be fed with feeding tongs or a feeding stick. These creatures have very sharp teeth and are also extremely powerful, making feeding them a somewhat dangerous task. Also, eels are known to be notoriously inaccurate when it comes to striking food, and accidental bite injuries are common.

Suitable foods for your eel include:

Moray eels also like feeder fish, although that can increase the eel’s aggressive tendencies, and feeder fish are not as nutritious as frozen foods.

It’s not uncommon for a captive eel to stop eating until it settles in its new aquarium environment. However, poor water conditions can be to blame. If your eel is reluctant to eat even though the water is fine, you may find that offering it some feeder fish can encourage it to start eating again. Remember that eels are capable of surviving for up to three months without eating, so if yours doesn’t eat for a few days, you shouldn’t be too concerned.

You don’t need to feed your eel every day. Overfeeding can cause liver problems in eels, so stick to feeding your pet twice a week, offering enough food so that it’s all eaten.

The Banana eel can be very aggressive in certain situations.

There are several techniques that you can use to manage your eel’s aggression:

Unfortunately, it is virtually impossible to breed Moray eels in captivity. For one thing, eel larvae (elver) need to drift freely on ocean currents for many months before morphing into juvenile eels, and that is simply not practical in a home aquarium.

Also, it is almost impossible to discern the gender of an eel. Eels have the ability to change gender too, just to add to the confusion!

Banana eels, like most other species of Morays, are robust and pretty disease resistant. Their slimy coating helps to keep them free from parasites, such as Ich, although they can sometimes develop skin lesions and inflammation resulting from injuries sustained during fights with other eels and aggressive tankmates.

The bite of the Banana eel is reportedly extremely painful and will bleed very heavily, but is it poisonous?

The slimy coat of the eel’s skin and mucous of the mouth contain several toxic substances. Hemagglutinin is a glycoprotein that causes the red blood cells to coagulate, slowing down the circulation of blood to the tissues surrounding the bite. The eel’s mucous coat also contains a hemolytic toxin that destroys the red blood cells.

Unlike other toxic marine fish, such as the pufferfish that eat poisonous animals and then store the ingested toxins in their body tissues, Morays are able to produce their own poisons via club-shaped glands in the skin.

Although these toxins are relatively mild, they can be very dangerous to people who are allergic.

So, never put your bare hands into your eel’s tank, and always use tongs or a feeding stick when providing your eel with food.

Banana Morays are not the kind of fish that are often available in your local fish store. One reason for that is that eels are virtually impossible to breed in captivity, so the eels that may be for sale are wild-caught, often to order.

So, these rare ocean beauties can often be sourced from a specialist dealer’s online site. That said, you’ll need to have plenty of cash to spend, as these fish typically retail for a price over $1,000, depending on the size and age of the specimen, and you will probably have to wait for your eel to be caught and shipped back to the dealer before you can take ownership.

Usually, it’s juvenile Moral eels that are for sale, measuring up to a foot or so long.

In this part of our guide to keeping Banana eels, we answer some of the most commonly asked questions about the care of these stunning creatures.

Q: What do banana eels eat?

A: Wild Banana eels are aggressive, nocturnal carnivores that eat fish, crustaceans, and invertebrates. In captivity, you should feed a mixture of fresh and frozen food, augmented from time-to-time with some live diet.

A: Moray eels are aggressive, and they will bite humans. However, bites usually occur when someone is feeding their pet by hand or carrying out routine tank maintenance tasks. Always use feeding tongs or a feeding stick to feed your eel and keep your hands well away from its mouth.

A: Eels are considered to be quite intelligent, as far as fish go. There is evidence of wild Moray eels hunting in collaboration with other fish species, which appears to bear out that theory.

A: Banana eels grow to be about two feet long in captivity. But the largest species of eel is the Giant Moray eel, weighing in at up to 66 pounds and measuring a gigantic eight feet in length!

If you want to add a real talking point specimen to your marine aquarium, a Banana Moray eel should be at the top of your list of possible purchases.

This species’ incredible coloration and fascinating behavior make the Banana eel a popular pet for experienced hobbyists. However, you must only keep Morays in a large tank that has lots of corals, caves, and crevices in which your eel can hide, and choose tankmates with great care.