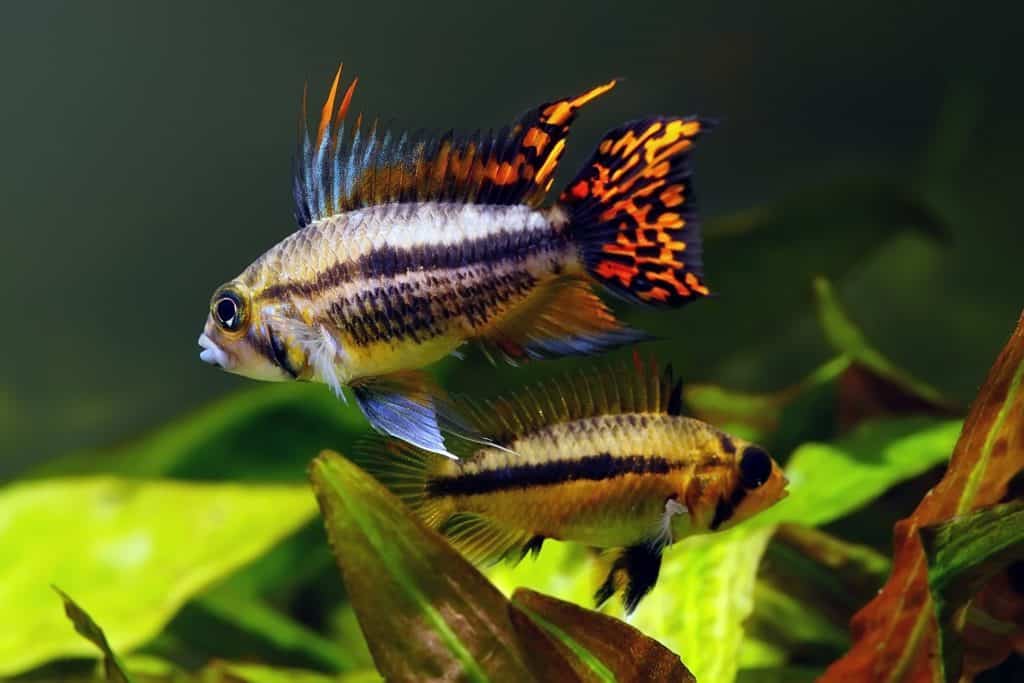 Did you know that a very large percentage of the fish we keep in our aquariums hail from the often dark waters of South America? A SA biotope is one of the most beautiful aquarium types you can set up, with its tannin-stained waters, creeping roots and colorful fish.

Some of the most colorful and fascinating species from South America are its many cichlids. Everyone is familiar with angelfish and discus fish, but don’t forget that there is so much more! In this article, we’ll discuss 6 South American cichlids that are suitable even for beginners.

They’re a freshwater fish from the Cichlidae family and can be found all over the world, although the most popular groups in the hobby are from South America and Africa.

Cichlids are some of the most sought-after fish in the aquarium hobby today. They are revered for their vast variety of colors, shapes, sizes, and personalities. With anywhere between 2,000 to 3,000 species currently known of (although only about 1,600 are officially documented), there’s a cichlid out there for everyone!

Cichlids are known for being aggressive, although some are more aggressive than others. While some are constantly on the hunt for blood, others can be downright shy. However, it’s important to note that even “peaceful” cichlids are prone to aggression, especially during spawning and when raising fry.

The ideal setup for South American cichlids is one that closely replicates their natural environment. Most of the species thrive in acidic water with temperatures between 75 to 85 degrees Fahrenheit (24-29.5 °C). The water flow should be gentle and water quality high.

These fish also need plenty of space and hides to avoid more boisterous tankmates, which is why many South American cichlid aquariums feature live plants and driftwood. Tannin-stained, dark water is recommended or even a must for many species. It’s highly recommended to have aquarium sand as the substrate so that they can exhibit their natural digging behaviors.

If you’re looking to get into South American cichlids for the first time, you may want to start small and work your way up. We’ll discuss 6 of the most common species below, all of which are suitable for beginning aquarists.

German blue rams are popular within the hobby because of their stunning appearance and small size, around 2-3 inches. Their bright yellow bodies with bold black stripes and stunning iridescence are enough to make anyone stop dead in their tracks to take a second look at the aquarium!

Since they are a dwarf cichlid species, you only need a minimum of 20 gallons (75 liters, long) to keep a single pair. However, as always, bigger is always better. The ideal aquarium size for thriving German blue rams would probably at least 30 gallons, especially if it’s a community tank that contains other species as well. Fortunately, rams are known for being relatively peaceful within communities. This is why they’re generally considered a good choice for people first getting into South American cichlids.

One thing to keep in mind when getting a German blue ram is that they’re not the hardiest of fish. It’s a known fact that many aquarists struggle with acclimating these South American cichlids to their home aquariums. Most of it is believed to be due to extensive inbreeding and commercial abuse that has stripped them of their hardiness. Pristine water and regular water changes are a must to keep this species healthy! If you’re looking for more information about these colorful fish, have a look at their full care sheet here.

The Bolivian ram is another excellent dwarf South American cichlid for beginners and is around the same size as the German blue ram. Although it’s not as eye-catching as the German blue, it’s stunning in its own right. In fact, it’s often recommended as an alternative to the German blue ram because it’s known to be hardier. Since they haven’t been subjected to quite the same level of selective breeding, they don’t die off as easily once introduced to a new aquarium.

Although they are suitable for community aquariums, Bolivian rams are still cichlids. And like all cichlids, they are prone to being territorial, especially towards other cichlids and similar species. Because of this, they should only be kept with peaceful community fish that dwell in the mid and top regions of the aquarium. As long as you have a large tank of 20 to 30 gallons (75+ liters) or more, you stand a good chance of successfully keeping these guys with other fish. Just be sure to add plenty of hiding places like cichlid caves to make sure everyone can retreat to a quiet spot when need be.

Although it’s not strictly found in South America, the rainbow cichlid comes to mind when many fishkeepers think of South American cichlids. It’s another dwarf species that typically grow to be about 4 inches (10 cm), although it canpotentially grow to be as large as 7 inches (18 cm). Since they have the potential to grow nearly twice the minimum size and are known for being semi-aggressive, it’s recommended to aim for a minimum tank size of 30 gallons (113 liters) if you’d like to keep rainbow cichlids.

Unlike most other South American cichlids, the rainbow cichlid tends to favor neutral to alkaline water with a pH of 7.0 to 8.0. This makes them a good choice for those that can’t provide the soft and acidic waters most of these species prefer Their preferred water temperature is around the mid-70s (around 24 °C), although they can tolerate warmer temperatures if they have to.

The cockatoo cichlid is another dwarf South American cichlid species that is around 2-3 inches (5-7.5 cm) and can be kept in smaller setups of 20 gallons (75 L) and up. They are known for their fiery-orange fins, which really brighten during courtship periods. Their small size, bright colors and easy care really make cockatoo cichlids a very attractive choice for beginners, so if you’ve never kept cichlids before this might be the species you want to go for!

They often do well in peaceful communities, but still, need plenty of hiding places to feel safe (and to help other fish escape if a cockatoo cichlid is feeling particularly aggressive). Additionally, cave hides will be used by females as spawning sites.

The blue acara is a popular beginner cichlid because of its stunning colorations. It’s available in a popular electric blue variation, which is bright blue with a captivating iridescent gradient. It may have different colors on its side that add to the stunning gradient, which truly creates a showstopper for any aquarium!

The Blue Acara is not among the smaller species on this list. It grows to be about 6.5 to 7 inches (16.5-17.5 cm) in length, which means you should consider an aquarium of at least 40 to 50 gallons (151+ liters). They can be kept with peaceful community fish, although avoid stocking nano fish. Anything small, like tetras, will fit into the Acara’s mouth and inevitably end up there sooner or later.

The severum cichlid is popular with both beginner and advanced fish keepers. They can potentially grow to be up to 10 inches (25.5 cm) and are revered because of their resemblance to the much larger discus cichlid. Severums are also known as banded cichlids, convict cichlids, striped cichlids, deacon cichlids, sedate cichlids, and hero cichlids. They are naturally green and red with vertical banding along their sides but are available in a variety of colors, which makes them appealing to the masses. Commonly seen colors include gold and blue

These fish require a lot of space to thrive, so you’ll be looking at having at least 75 gallons (285 liters) for one or two individuals. If you want to keep other fish with severum cichlids, even other South American cichlids, it’s highly recommended to have over 100 gallons (380 liters). This way you can be sure there’s plenty of space to diffuse any aggression that might occur.

If you have any more questions about the South American cichlids on this list or want to share your own experiences with any of the species, don’t hesitate to leave a comment below!