How to Best Care for a Bumblebee Cichlid 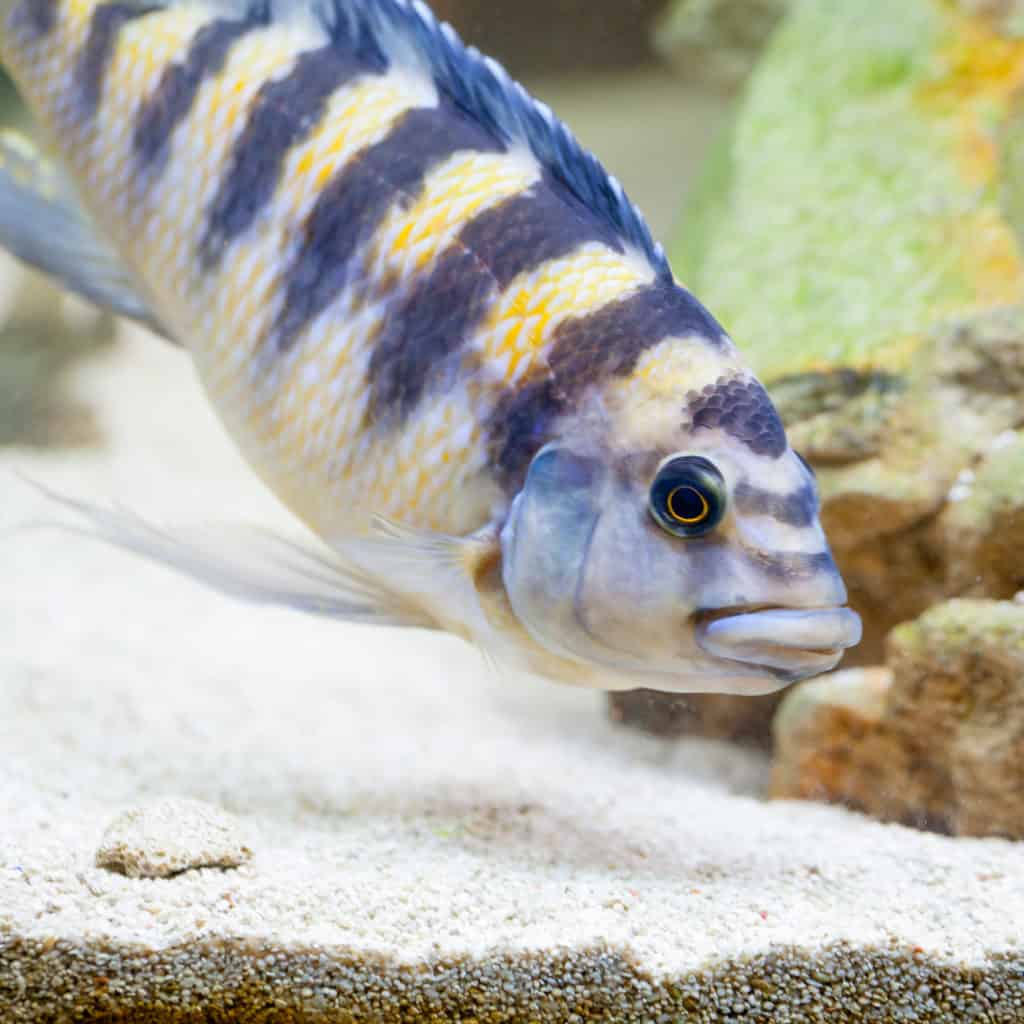 The bumblebee cichlid is an unusual and beautiful addition to any display tank.

In this article, we introduce this enchanting cichlid and provide you with all the information that you’ll need to care for these stunning fish.

What is a bumblebee cichlid?

Most of the time, bumble cichlids display the yellow and brown barred markings from which they get their common name. The catfish do not regard the bumblebee as a threat at this time, allowing the fish to clean parasites from their skin. However, catfish produce thousands of eggs that they lay inside caves. Bumblebee cichlids feed on the eggs, assuming a dark brown or black color that helps to camouflage them. Once the cichlid raiders have eaten their fill, they change back to their usual coloration, and the catfish are none the wiser.

The bumblebee cichlid is a large fish with a robust, thick body. Males can grow to a length of almost six inches, whereas females are smaller, growing to not much more than five inches long.

The lifespan of this fascinating Mbuna is typically in the range of ten years and upward, provided that the fish are given the right foods and are kept in the right conditions.

You will need a minimum tank size of at least four feet in length and with a water capacity of 50 gallons to comfortably accommodate one bumblebee cichlid, as these can grow to be large fish. If you’re planning on keeping several fishes, you should have an aquarium of about 100 gallons or more, which measures at least five feet in length.

Although cichlids are freshwater fish, they are best-suited to a brackish water environment.

The habitat should be designed with a rocky reef effect that includes lots of caves, and the substrate should be sandy. Use ocean rock to create a sturdy series of structures that extend from the bottom of the aquarium to an inch or so below the water surface. The idea of these structures is to create crevices and cracks that the Maylandia crabro can explore. Note that cichlids do rummage around and dig while scavenging for food, so the rocks must be secure and stable.

Bumblebee cichlids prefer strong water movement within the aquarium, which might not suit other species. As these cichlids are large, you’ll need to carry out weekly water changes of at least 20 to 40 percent, and your filtration system must be extremely efficient.

If you use crushed coral in the aquarium, it will dissolve more quickly than other salts and will help to keep the pH levels in the water on the high side, which suits the Maylandia crabro. However, you must keep a close eye that the pH level does not become excessive, as that would allow ammonia levels to get dangerously high, which would be detrimental to the health of the community.

Although you can use coral sand or Aragonite to help to keep the water alkaline and hard, Pseudotropheus crabros tend to feel safer and show off their colors more effectively over a dark or black substrate. However, you can place a mesh bag of coral sand inside the aquarium’s external filter for buffering purposes.

Like most species that live in a rocky environment, Mbuna is highly aggressive and must be kept in aquariums that are not overcrowded.

The bumblebee cichlid is especially belligerent, and it is wise to keep one male with a harem of females. Keeping just one female to one male is not a good idea, as that will usually result in continued harassment, sometimes leading to death. That said, you can successfully house bumblebee cichlids with other species of African cichlid, although you should avoid keeping fish with a similar color pattern.

Generally, bumblebee cichlids are happiest and most likely to thrive in a large cichlid community aquarium of at least the recommended minimum tank size.

In a wild environment, bumblebee cichlids eat fish eggs, insect larvae, benthic crustaceans, and parasites that are found in and around the caves the fish inhabit. However, the species is actually an omnivore. Captive bumblebee cichlids may like a diet that is relatively high in protein compared with most other Mbuna. So, your list of a good diet for Maylandia crabro could include the following foods:

A diet that includes vegetables is important when feeding bumblebee cichlids, as they provide fiber, which can help to keep the fish’s digestive system healthy and free from disease. Note that the species can be sensitive to some foods, including beef heart and other forms of meat, so it is important not to feed your fish these foods.

Be very careful not to feed your fish too much. Overfeeding can lead to rapid deterioration in the water quality in the tank because of the amount of waste that the fish produce. Feed your fish two to three times per day in small amounts that are eaten up completely in a few minutes.

Bumblebee cichlids are mouthbrooders. In the correct tank set up, it is possible to breed these beautiful fish. Ideally, you want to have one male to six females in the tank. That will ensure breeding takes place and will prevent the male from harassing a lone female. Even during spawning, male Psuedotropheus crabro can be aggressive, sometimes resulting in the death of the female.

Once the newborn Maylandia crabros are swimming free, they will eat newly-hatched brine shrimp, crushed flake food, and daphnia, all of which you can buy from a good fish store or search online for the necessary info and order what you need.

Cichlids are susceptible to a number of diseases. Many of these problems are preventable through correct care and feeding, and most are curable. Here’s some helpful information about common conditions that can affect Maylandia crabro.

The most common cause of swim bladder problems is overfeeding, resulting in constipation and bloating. Ensuring that your fish get plenty of high-fiber food in their diet, such as peas, can prevent the condition.

Malawi bloat is a common disease among many species of African cichlid that are kept in aquariums. The condition causes swelling of the abdomen, loss of appetite, rapid breathing, discolored feces, and staying at the bottom of the aquarium. Also, Malawi bloat can cause kidney and liver damage if it is left untreated. Unfortunately, if the condition reaches that stage, it is usually fatal within a few days.

It is thought that Malawi bloat is caused by a protozoan parasite occupying the fish’s intestines. When the fish are stressed, for example, due to poor water quality, the protozoa reproduce, and problems begin. You can treat the disease by performing a large water change and then dosing the tank with Metronidazole. Remember to remove the activated carbon from the filter while you’re treating the aquarium with that medication.

Cotton wool disease is an easy condition to diagnose, manifesting itself as a fuzzy white growth on infected fishes’ scales, fins, and head. The disease is caused by a naturally occurring fungus that is found in the aquarium, only becoming a problem when water quality is poor, or the fish are stressed.

Treat the condition with an antifungal medication, and make sure that you remove uneaten food and organic debris from the substrate. Monitor the water quality to ensure that levels of ammonia, nitrites, and nitrates are as low as possible.

Flukes are a parasitic flatworm that infects the fish’s gills, hence the disease’s name. Once inside the fish, the parasite attacks the gill membranes, creating a thick film of slime and inflaming the gills. The slime interferes with the fish’s breathing. Symptoms of the condition include labored breathing, rubbing the body against objects in the aquarium, and fading color. You can treat gill flukes by adding aquarium salt to the water at a rate of one tablespoon per day and increasing the water temperature slightly.

Hole in the Head Disease

Hole in the head disease is also known as Hexamita. Hexamita is a common disease that can affect all species of freshwater fish but is especially prevalent in cichlids.

The condition causes depression to form in the fish’s head, as well as poor appetite and weight loss. Lesions may also develop along the fish’s lateral line, becoming larger over time. Eventually, a systemic infection develops. It is thought that hole in the head disease is caused by poor water quality, an imbalance in minerals in the water, and a parasite called Hexamita.

Hole in the head disease can be difficult to treat because of the condition’s potentially varied causes. However, you should begin by improving the water quality in your tank, treating the water with antibiotics, and ensuring that your fish are given the correct diet.

Ich is also commonly known as white spot disease and affects all species of tropical fish, including Mbuna.

The condition is caused by the aggressive protozoan parasite, Ichthyophthirius multifiliis. Ich is easily identifiable by the tiny white spots that form on the body, fins, and gills of the affected fish. Other symptoms of Ich include clamped fins, lethargy, poor appetite, rubbing against objects in the tank, and labored breathing.

Ich has a high infection rate and usually spreads rapidly throughout fishes that are kept in a community habitat. Fortunately, Ich is easily treatable with malachite green and acriflavine. If you prefer not to introduce chemical treatments into the aquarium, you can treat Ich with salt baths and by increasing the water temperature.

The bumblebee cichlid is a mouthbrooder that comes from the African Lake Malawi. More correctly known by its scientific name, Pseudotropheus crabro, these beautiful fish make a stunning addition to a large tank. However, bumblebee cichlids can be very aggressive, and, for that reason, they are best kept with other confident cichlid species.

An omnivore, Maylandia crabro may live for over ten years if kept in the right conditions and given proper care. Many males are slightly larger than females. Pseudotropheus crabros are almost always dark brown to black in color with distinctive yellow/gold striped pattern on the body and dark spots along the ventral line.

These mouthbrooders can be bred in captivity, although spawning is most successful in a big tank.