How to Best Take Care of a Yellow Lab Cichlid 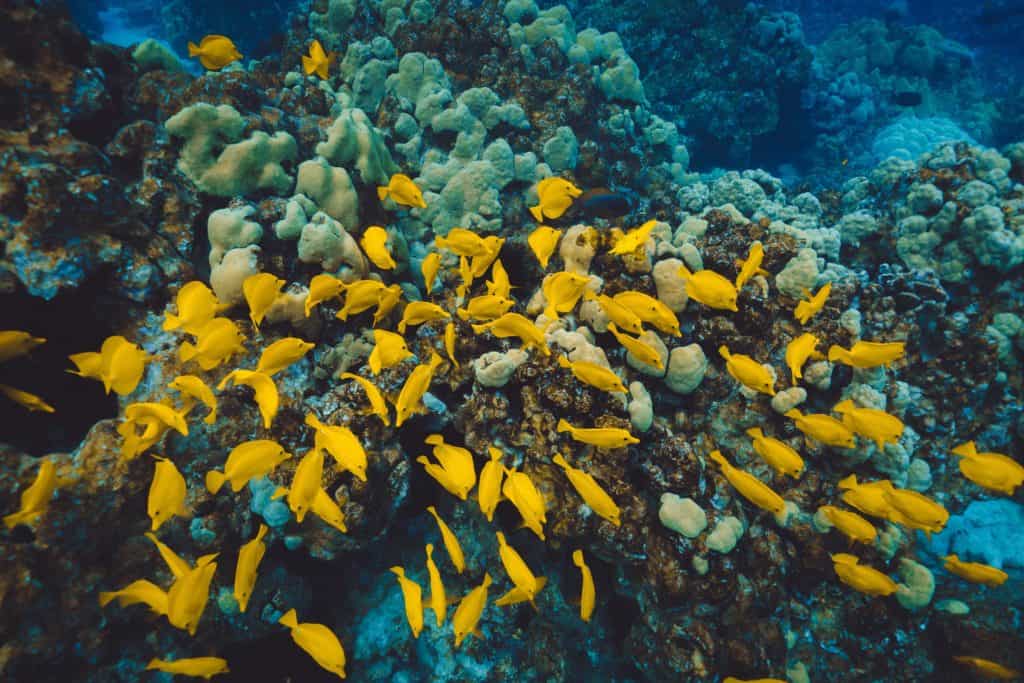 If you’re considering adding Malawi cichlids to your collection or you want to add an injection of color into an existing Mbuna tank, a Yellow Lab cichlid must be high on your list.

In this article, we introduce this stunning fish whose striking electric yellow and blue coloration outshines even the most impressive marine species.

What is a Yellow Lab cichlid?

These beautiful fish have many other names, including:

The Yellow Lab grows up to four inches in length and lives for up to 10 years, depending on the quality of care the fish receives.

As mentioned above, the Yellow Lab comes in different color morphs, depending on its area of origin. For example:

Yellow Lab cichlids are endemic to Lake Malawi, and the brilliant yellow color is a regional variant of the blue-white Labidochromis caeruleus.

In areas such as Mbowe Island, Kakusa, and Lion’s Cove, populations of bright yellow fish exist, although almost all Yellow Labs are now captive-bred in the Czech Republic and Singapore. Generally, the Czech fish are smaller and more expensive than those bred in Singapore, but they are of much better quality.

Some non-yellow Labidochromis caeruleus specimens have faint vertical barring on the body. While that doesn’t mean that these fish are hybrids, that is possible, especially if the fish are sourced from breeders in Singapore.

Care of the Yellow Lab cichlid

These beautiful fish are quite easy to care for, so they make a good choice for the novice Mbuna hobbyist.

The tank size for a community that includes Yellow Lab cichlids should be at least 30 gallons, although larger than that is preferable.

The species is generally peaceful, although the aquarium should allow sufficient space for male caeruleus to avoid aggressive males of other species and to allow females to keep out of the way of over-attentive males. So, a tank that is long rather than tall is the best design to use.

Yellow Labs like plenty of caves and small rocks that they can explore and swim around. The preferred substrate is gravel or sand or a mixture of both. Also, include driftwood and plants to create an interesting and attractive environment that mirrors the Lake Malawi habitat of the Electric Yellow cichlid.

You can use coral sand for substrate, although you should know that the Yellow Lab cichlid can turn paler over ocean rock or new coral sand, and their color is more vivid over a dark substrate.

The Electric Yellow cichlid can be kept in a brackish or freshwater tank. The water in Lake Malawi is rich in minerals, making the environment rather alkaline. So, the pH range within a Yellow Lab cichlid tank should be between 7.2 and 8.8. Water hardness must be maintained between 10 and 20 dGH.

The water temperature in Lake Malawi is between 710 and 820 Fahrenheit and should be replicated within the cichlid tank.

Lake Malawi is a huge body of water, but it does not have tides or currents. Even so, the Labs that live in the Lake and its environs prefer good water movement in their tank. You’ll need to carry out partial water changes of between 10% and 20% each week to maintain the water quality that Yellow Labs prefer.

Filtration provided by one or more external canister-type filters is recommended, especially fluidized or trickle sand filters. You may also want to add an air stone for extra aeration.

These fish are sensitive to poor water conditions. Always aim for nitrate levels below 40 ppm and zero levels of nitrite and ammonia. If you notice that your cichlids are not eating well, begin to flick their bodies on the substrate, or start gasping at the water surface, check the ammonia levels in the aquarium.

In Lake Malawi, the light is diffused by plants and rock formations. So, you’ll need to use a medium to low lighting effect in your aquarium.

The Electric Yellow cichlid is an easy fish to feed. They are primarily insectivores in their natural Lake Malawi habitat and are less likely to contract Malawi bloat through eating a diet in captivity that is too high in protein. You can safely feed your fish goldfish food and Spirulina flake, which enhances the caeruleus’ color too. Yellow Labs can also eat standard tropical fish food, frozen foods, including Mysis, bloodworms, and bloodworms.

The one thing that can cause disease in your aquarium is poor water quality. Also, cichlids from Lake Malawi can suffer from several specific diseases.

Malawi bloat is a common disease that affects Yellow Lab cichlids that are found living in Lake Malawi.

The condition is caused by a dietary deficiency in vegetable matter. For that reason, be sure to include some vegetable-based food in your cichlids’ diet.

Fish affected by Malawi bloat have swollen bellies and may also develop skin sores. To treat the condition, change 30% of the water and treat with Metronidazole and Clout.

Hole in the head disease

Hole in the head disease is caused by the Hexamita flagellate parasite.

The parasite primarily infects the fish’s gut, spreading to the abdominal cavity, kidneys, gall bladder, and spleen. Eventually, the fish develops lesions along the lateral line and head. If not treated, secondary bacterial infections can develop, and the outlook for the fish is bleak.

Stress is a primary mitigating factor in this condition, as are poor water quality, overcrowding, and improper nutrition.

Remove affected fish to a quarantine aquarium, and treat the water with the antibiotic metronidazole.

Ich is a very common skin infection that’s caused by the protozoan parasite, Ichthyophthirius. The parasite is present in most aquariums but only attacks fish that are weak or unhealthy, largely due to poor water quality or incorrect diet.

Ich, or white spot disease, presents as a rash of tiny white dots all over the affected fish’s body, head, and fins. You can treat Ich by raising the water temperature in the aquarium to 860 Fahrenheit for three days and treating the tank with a suitable proprietary medication that you’ll find on sale in fish and pet stores.

These African cichlids are not generally aggressive. However, an aquarium filled with fish of the same species makes for a peaceful, lively, colorful community where clashes are few. Interestingly, an understocked community of fewer than 20 individuals is more likely to be aggressive than one where there is plenty of fish.

The best tankmates for labidochromis caeruleus include other Mbuna and another type of African cichlid. You should be aware that keeping a mix of cichlids can lead to some hybridization between Labidochromis, Pseudotroopheus, and Metricalima. A mixture of bright Yellow Labs, electric blue, orange, white, and black specimens can be truly spectacular.

Species to avoid are Melanochromis auratus, which can be aggressive.

Experienced hobbyists might like to try their hand at breeding labidochromis. That’s not as tricky as you might think, provided that the tank conditions are right, and you have a good mix of both sexes.

How to sex Labidochromis caeruleus

Ideally, you want to have two female fish to one male in your community aquarium.

Females usually have shorter fins and are smaller than males. Also, the female of the species has a lighter belly, which can sometimes be white. A female Electric Yellow cichlid will have little or no black outlining on her finnage, and she should never have a black chin.

Mbuna can breed from a very small size, so if you observe young fish in your tank, you’ll note that the dominant ones are always male. If females have been in the tank for a week or two, they may be mouthbrooding eggs.

Breeding these fish is the same as for any Lake Malawi African cichlids. Males choose, clear, and defend a breeding territory, usually over a patch of substrate or rock. The male cichlid will then display and shiver at passing females to tempt them while chasing off any rival males.

During spawning, the female lays one egg, spins around, and takes it in her mouth. Then the male positions himself on the substrate so that when the female grabs another egg, she picks up his sperm in her mouth too. That process continues until the female has a mouthful of fertilized eggs.

Yellow Lab cichlids are mouthbrooders. After around one month, the female releases the fully-formed fry from her mouth. The fry takes refuge in any available nooks and crannies in the tank to avoid being predated on by other fish in the habitat.

In this part of our guide, we answer a few of the most commonly asked questions about keeping Yellow Lab cichlids.

A: The Yellow Lab cichlid is a peaceful fish, although, if the aquarium is understocked, males can become aggressive toward males of different species.

Q: How big does a Yellow Lab cichlid get?

A: A mature Yellow Lab cichlid generally grows to around four inches in length. However, if provided with a very large aquarium, good water conditions, and appropriate foods, they can grow bigger.

Q: Is a Yellow Lab cichlid a Mbuna?

A: Yes. The Yellow Lab cichlid is also known as a Mbuna or rockfish, so-called for the rocky areas of Lake Malawi from where the fish originates.

A: All Yellow Lab cichlids should have a black dorsal stripe. Sometimes, the stripe on female cichlids is not as bold as that of their male counterparts. However, if the stripe is not there at all, it could be that the fish is a hybrid. Also, some non-yellow Labidochromis caeruleus specimens have faint vertical stripes on the body, which can be a sign that the fish are hybrids obtained from breeders in Singapore.

If you are looking for a bright fish of small to medium size that is not aggressive, you could do worse than choosing a Lake Malawi Yellow Lab cichlid.

These mouthbrooders are readily available from many fish stores or via a search online for specialist overseas fish breeders. This common cichlid needs good water quality and a setup that includes rocks, caves, and plenty of plants where the fish can hide.

Yellow Lab cichlids are relatively easy to keep and would make a bright, colorful addition to a dedicated Mbuna tank.