Activated Carbon In The Aquarium 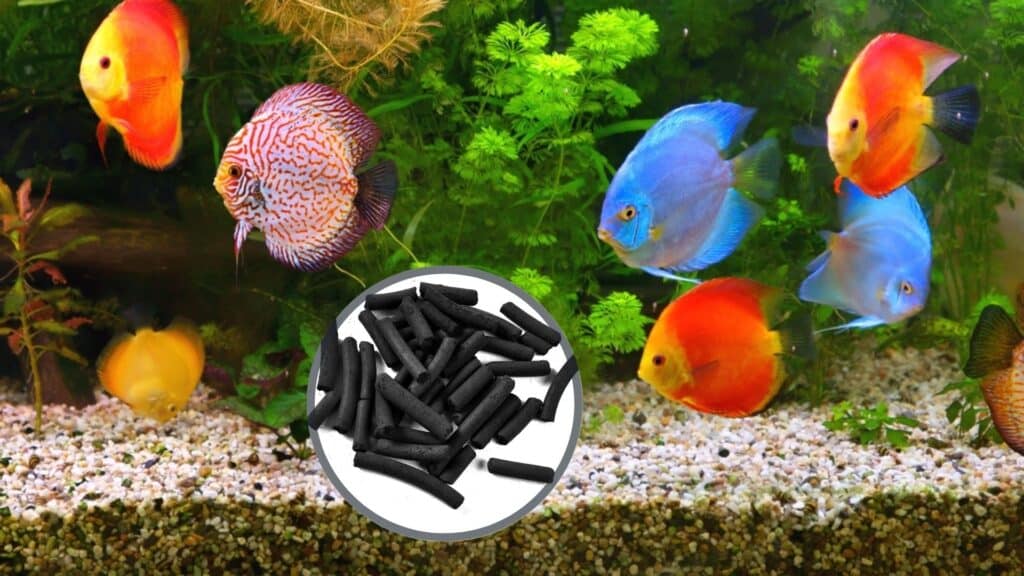 If you’ve ever needed to buy an aquarium filter, you might have seen that it includes a cartridge of activated carbon.

Activated carbon is the most popular type of filter media for both freshwater and saltwater aquariums. This simple and inexpensive method of chemical filtration helps keep tanks clear and odorless, and can even remove toxins and medications from the water column.

However, activated carbon is not necessary for all setups and is only effective when correctly dosed and maintained.

Keep reading to find out everything you need to know about activated carbon and how to use it efficiently in your freshwater or saltwater tank!

What is activated carbon?

The two names can usually be interchanged, but in regards to fish tanks, it’s referred to as activated carbon. In the aquarium hobby, activated carbon is considered a type of chemical filtration.

Because the process to make activated carbon requires the material to be heated to extreme temperatures, any previous toxins or impurities have been removed from the wood making it safe to use in the aquarium.

The heat also helps make the material more porous, allowing more room for pollutants in the air or water to be captured and discarded once put into use.

As we’ll discuss, there are different materials that activated carbon can be made out of and different forms that it can be purchased.

Carbon can effectively be made from a few different raw materials. The number of pores and pore size largely depends on what material the carbon is made from.

Some popular starting materials are coconut shells, wood, and coal (bituminous, lignite, and anthracite); coal is the most common base for aquarium carbons, more specifically bituminous coal.

Bituminous coal is usually most preferred as it is extremely porous and offers a large amount of surface area. On top of that, it is very resistant to wear and tear and is easily regenerated.

Is activated carbon good for aquariums?

Activated carbon can be good for some freshwater and saltwater aquariums, but is not absolutely necessary for a successful system.

There are some common misbeliefs about what activated carbon actually does for aquarium health.

Removes important nutrients/alters water chemistry. For many years, it was commonly said that activated carbon will help remove ammonia, nitrite, and nitrate from the water column. This is not true and adding activated carbon to a new or struggling aquarium won’t help the nutrient problem.

Likewise, it was believed that activated carbon also removed trace nutrients. This means that any fertilizers or boosters that are added to the aquarium have the possibility of being filtered out.

This is a very big discussion in the fish tank hobby today and many planted-tank hobbyists do not use carbon in their aquariums because of this. While it’s unlikely that your activated carbon removes a substantial amount of nutrients from the water column to affect your plants, it is not completely impossible.

Lastly, activated carbon has no influence on water hardness or alkalinity, though certain filter media can be used to alter those parameters.

Leak back pollutants once full. Another common misconception about carbon is that it leaks back held-impurities into the system once the carbon pores have been filled.

Again, this is not true. While it is possible to some extent, the conditions needed would not occur in the fish tank setting.

However, some activated carbons do contain phosphate which can start to hypothetically leak out over time, though the amount would likely be insignificant. Always use a reputable activated carbon product with aquariums in mind, and you won’t have to worry!

Rechargeable in the oven. Luckily, activated carbon is relatively inexpensive these days and this myth has almost entirely disappeared from the hobby.

However, it was previously believed that putting spent carbon in an oven for a few hours would help break the bonds of the toxins and impurities and the activated carbon would be just like new.

While it is possible to ‘reset’ carbon like this, the temperature would need to be a couple of thousand degrees in order to actually work.

But if activated carbon doesn’t influence most of the nutrients in the water column, then what does it exactly do in the aquarium?

What does activated carbon do for fish tanks?

It should be noted that activated carbon does remove chlorine and chloramine over time, but this isn’t usually immediate enough for most aquarium purposes. As always, treat water with a trustworthy water conditioner for immediate results.

Activated aquarium carbon is one of the most efficient ways to remove odor from the fish tank. This process is completed by adsorption and absorption.

Because activated carbon is so porous, it has plenty of room to both adsorb and absorb odor particles but will need to be changed every 3-6 weeks.

If you recently introduced driftwood into your aquarium or have a lot of leaf litter, then you might be experiencing tannins.

Similar to the process of removing odors, activated carbon will adsorb and absorb tannins in the aquarium, removing yellowness or cloudiness from the fish tank.

Some aquarium products have been synthetically manufactured to remove tannins and other organics faster than common activated carbon, though carbon and regular water changes should do the job eventually.

You do not want to run activated carbon when dosing medications. This is because the medication will be picked up by the carbon and stripped from the water, leaving none for your fish.

Ideally, you will want to use established biological filtration instead that filters larger pieces of waste and that houses beneficial bacteria to process ammonia, nitrite, and nitrate.

Activated carbon should only be used when intentionally wanting to remove medications from the water, usually, after the course of the medication has finished. Otherwise, carbon can help keep the water clean for sick or transitioning fish.

While most hobbyists don’t need to worry about toxins entering their aquarium, reef enthusiasts might want to err on the side of caution.

Many corals produce toxins that can be deadly. Zoanthid and Palythoa are the biggest concerns as they have been known to release palytoxin.

Carbon effectively removes these toxins from the aquarium before real damage can be done. Similarly, activated aquarium carbon should be used if there is concern that aerosols, smoke, or other contaminants have entered the fish tank.

If you notice something is wrong, run carbon, test water parameters, and perform regular water changes.

How to use activated carbon in the aquarium

Activated carbon is very easy to use in the aquarium, and each product will have its own instructions for the best results.

Usually, activated carbon needs to be thoroughly rinsed with used-aquarium water to wash off the dust that could otherwise lead to a cloudy tank.

The activated carbon should then be placed in an area of high flow, like in a filter, sump, or reactor. This will allow for the most water to be filtered through, stripping impurities at a greater rate than if it sat in an area of low flow.

Some hobbyists choose to use activated carbon in a reactor, though others have had problems with the carbon being tumbled around too much and weathered down.

How long does activated carbon last in an aquarium filter?

Activated carbon will be effective for about 3-6 weeks in the average freshwater or saltwater aquarium setting.

Aquarium carbon should be placed in an area of high flow so that as much water as possible is passed through to remove unwanted odors, colors, and impurities.

It is important to keep in mind that the mesh bags or filter pads that hold the carbon may become blocked by detritus and can start to leak traceable amounts of ammonia, nitrites, nitrates, and phosphates in that time.

The easiest way to keep your mesh bag or other filter media clean is by rinsing it off every water change or on a customized schedule. This will prevent organics from breaking down and leaking back into the tank.

Do you need activated carbon in your aquarium?

Carbon is not necessary to use in all aquarium setups, though it is more common to see a carbon-free freshwater tank than a saltwater tank.

This is mainly due to the fact that many saltwater creatures can create toxins that can simply be removed by activated carbon if need be. There are usually no ill effects of using carbon, and many hobbyists use it just to keep their water clear.

However, as we’ll discuss, carbon can be questionable for some hobbyists.

How to run an aquarium without activated carbon

As mentioned before, many planted-tank owners choose not to use activated carbon in their filter because of the belief that it will strip the water of important trace nutrients that feed the plants.

While this hasn’t been entirely proven, you do not want to be dosing fertilizers just for the filter media bag to be removing them right away. Instead, simply use some filter floss for biological and mechanical filtration to be on the safe side.

Filter floss will provide ample surface area for beneficial bacteria to grow while catching debris. Because of this, this floss will need to be squeezed out every water change to keep that waste from rotting and turning into excess nutrients.

In order to do this, use the old tank water and lightly wash away any exterior debris; you do not want to wash off any of the beneficial bacteria growing or kill it with chlorine!

Hang-on-the-back filters and canister filters are popular because they allow enough space for an assortment of filter media, but this isn’t entirely necessary. A simple sponge filter will act the same if you just want an area to grow beneficial bacteria without the ability to customize the media.

If you want to keep using one of those filter systems, then you can supplement the extra space with more biological bacteria media, like bio balls, to create growing space for bacteria.

Activated carbon isn’t necessary for the aquarium, even if you do have odors or tannins; while it makes fixing these issues that much simpler and quicker, regular tank maintenance and water changes will also alleviate those problems.

There are some common misconceptions about activated carbon out there, like being the same as activated charcoal, being known for removing important nutrients/altering water chemistry, and being rechargeable.

However, activated carbon is a tried and true method for removing odors and tannins in the aquarium, as well as helping clear quarantine tanks of medicines and removing toxins that may be present.

2 thoughts on “Activated Carbon In The Aquarium”