Freshwater Seahorse: How to Care for the Non-Marine Species 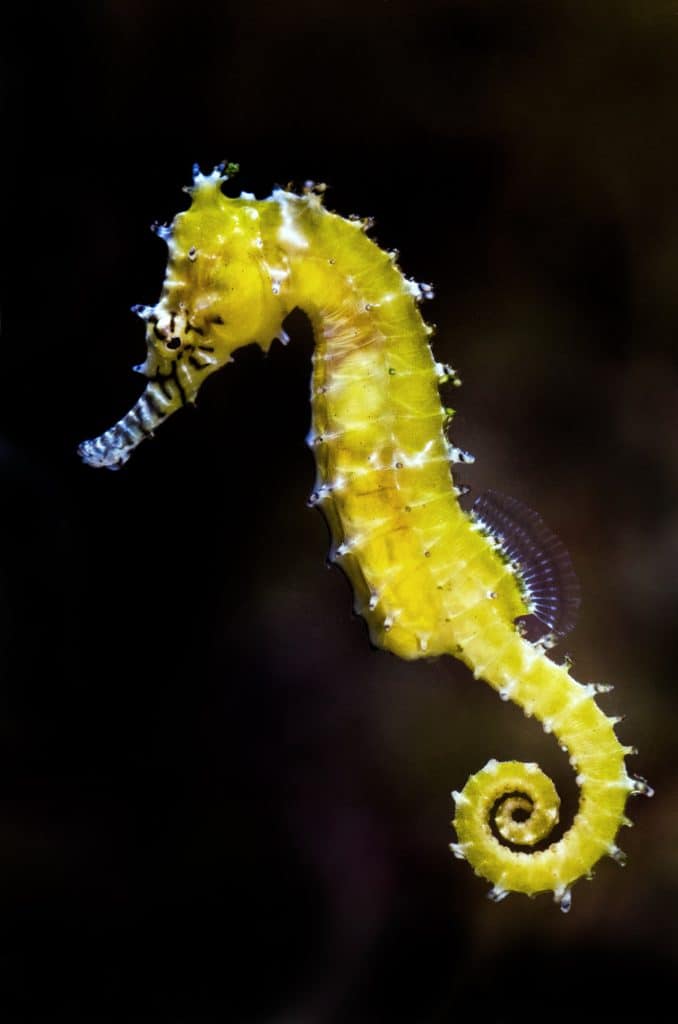 The freshwater seahorse is actually an urban myth. Seahorses are generally marine fish, although a few varieties can survive in brackish rivers. These fish are not available in seahorse sales and are not suitable for life in an aquarium environment.

You often see a pet seahorse described as a “hippocampus,” which derives from the Greek word for horse. Often, the hippocampus is advertised as a freshwater seahorse, which is misleading. So, the seahorse for sale in your local fish store is really a freshwater pipefish. Although the pipefish is related to the seahorse, true seahorses can only survive in a marine aquarium.

Like the seahorse, the pipefish belongs to the Syngnathidae family, although they two are not the same species.

Pipefish can grow up to eight inches long. These fish have a similar shaped head and snout to that of the seahorse, with tiny, narrow, toothless mouths, and they feed by creating a vacuum that sucks in the tiny crustaceans, plankton, and immature shrimp that form the diet of these fascinating creatures.

The resemblance between pipefish and seahorses ends at the creature’s head. The pipefish has a long, slender, straight body, which is the perfect camouflage for the seagrasses and weeds that are the preferred habitat for these fish.

Although freshwater seahorses are much better swimmers than their distant marine relatives, they cannot cope with strong currents and move around very slowly, propelled through the water by a tiny dorsal fin. Like seahorses, some species of pipefish have a prehensile tail that can grasp objects to prevent the fish from being swept away by the tide and in rough water conditions.

There are over 200 species of pipefish that come in a wide range of colors, including green, red, orange, brown, purple, and black. A few varieties of freshwater seahorses can even change color during the day according to their surroundings.

Most species of the hippocampus live in tropical and subtropical marine waters, inhabiting coral reefs and lagoons with lush vegetation of seagrass and eelgrass, which the fish use as camouflage for protection and for sucking in unsuspecting prey.

A few species can live in fresh or brackish water, but that is quite unusual.

Pipefish are extremely entertaining to watch, especially when kept in pairs.

You’ll see your pets slithering across the sandy substrate in search of food, looking almost like sea snakes. These creatures are experts at hiding themselves, and if you have vertical plants in your tank, the seahorses will position themselves upright among the plants with their heads pointing downward as they look out for prey.

When kept in groups, individuals often cling to each other’s tails to form a long chain.

Caring for a freshwater seahorse

Keeping a seahorse pet is not recommended for novice aquarists, as these creatures are not easy to look after successfully, and you will need to provide the perfect home with ideal water conditions if your fish is to thrive.

Pipefish need lots of space. Ideally, you should allow at least 20 gallons of water per fish.

The ideal aquarium setup for pipefish is a large marine tank that contains lots of colorful coral, grass, and rocks. You should also include caves and overhangs that the fish can use for shelter. The substrate should consist of coral sand.

Freshwater seahorses are visual feeders, so the tank should be well-lit during the day when the fish are active.

Also, you’ll need to use a filtration system that doesn’t produce too much flow, as these fish are not strong swimmers.

Pipefish should only be kept with their own kind, ideally in a pair or a group. However, if you have a marine aquarium, you could also keep seahorses.

Some varieties of pipefish can be aggressive, and they are slow feeders, which may cause problems if you try to create a community environment that contains faster types of fish.

Ideally, you should feed your fishes little and often. A variety of live foods is essential to provide a complete diet. Choose foods that are found in a marine environment, as these are rich in the highly unsaturated fatty acids that these creatures need. Note that freshwater organisms lack those essential fatty acids, so you’ll need to provide supplementation for your seahorses if necessary.

Many hobbyists find it easier to feed frozen food to their pipefish. Grate the food so that it is small enough to be easily taken by the fish.

Also, be sure to feed the fish at a regular time each day, and place the food at the same site in the tank so that it can be found easily. One problem that many hobbyists encounter is that pipefish cannot find the food that’s offered to them, and that can lead to starvation in some cases.

The rigors of transport often take their toll on freshwater seahorses, resulting in disease and health problems, most commonly in the form of bacterial infections.

When you choose your new seahorses, look carefully for signs of bacterial infection, including:

Captive-bred pipefish are generally hardier than wild-caught specimens and often live for between eight and ten years.

Of the 200 species of freshwater seahorse, only a few are suitable to be kept in an aquarium. As a general rule, the smaller the variety, the more aggressive it will be.

The most common pipefish for aquariums are Flagtail pipefish and Dragonface pipefish.

The bluestripe pipefish is a beautiful, hardy flagtail and makes the best choice for beginners. Bluestripes are only three inches long but are very active and need a large area to keep them happy. Male bluestripes can be very aggressive, so always keep one of each sex together that are of a similar size.

Janss’ pipefish is relatively peaceful, although it should not be kept with other Doryhamphus. Janss’ spend much of their time swimming upside down, thriving in a reef aquarium.

The banded pipefish is the most commonly kept aquarium pipefish, and being relatively peaceful, will happily live in pairs. This variety is not to be confused with the multi-banded pipefish, which is extremely aggressive and does not generally do well in captivity.

Only three of the 12 recognized Dragonface varieties of pipefish are kept as pets, largely because they don’t travel well, and many die in transit. Many stockists simply label these fish as Dragonface pipefish without differentiating between the types.

The Dragonface needs a large aquarium of at least 30 gallons that contains plenty of macrofaunae and living food, as these fish find frozen food unpalatable. Ideally, Dragonfaces should live in pairs or groups in a very big tank.

Experienced hobbyists with the right equipment and setup may enjoy breeding pipefish.

It’s the male fish that carries the babies, usually in a pouch or spongey area on his tail. Mating entails several elaborate rituals. Following mating, the female deposits her eggs, which are then fertilized by the male before being transferred to his pouch where they incubate before hatching. The female will often mate with several males to increase her offspring’s chances.

Pipefish fry is independent immediately, and it’s estimated that only 1% of the babies live to reach maturity.

In this section of our guide, we answer some of the most frequently asked questions by hobbyists who are considering adding one of these amazing fish to their collection.

Q: Can seahorses live in an aquarium?

A: Yes. Some species of seahorse can live in a marine aquarium setting. However, these creatures are not easy to keep and are not recommended for beginners.

Q: Can you buy a seahorse?

A: Seahorses can be found for sale on various specialist .com sites. However, many of these fish are taken from the wild and do not survive for more than a day or two in captivity. Also, true seahorses only live in salty or brackish water.

Seahorses do not tolerate stress well, so do not be tempted to take one from the wild for free as it will most likely die before you even get it home.

Q: How much is it to buy a seahorse?

Q: Can seahorses live with goldfish?

A: No. Seahorses can only live with their own kind or with certain peaceful types of pipefish.

The freshwater seahorse is more correctly known as the pipefish.

These colorful and fascinating fish certainly make an appealing addition to a display aquarium. However, many of the 200 varieties of pipefish cannot be kept in captivity, and the species is certainly not suitable for a beginner hobbyist.

5 thoughts on “Freshwater Seahorse: How to Care for the Non-Marine Species”