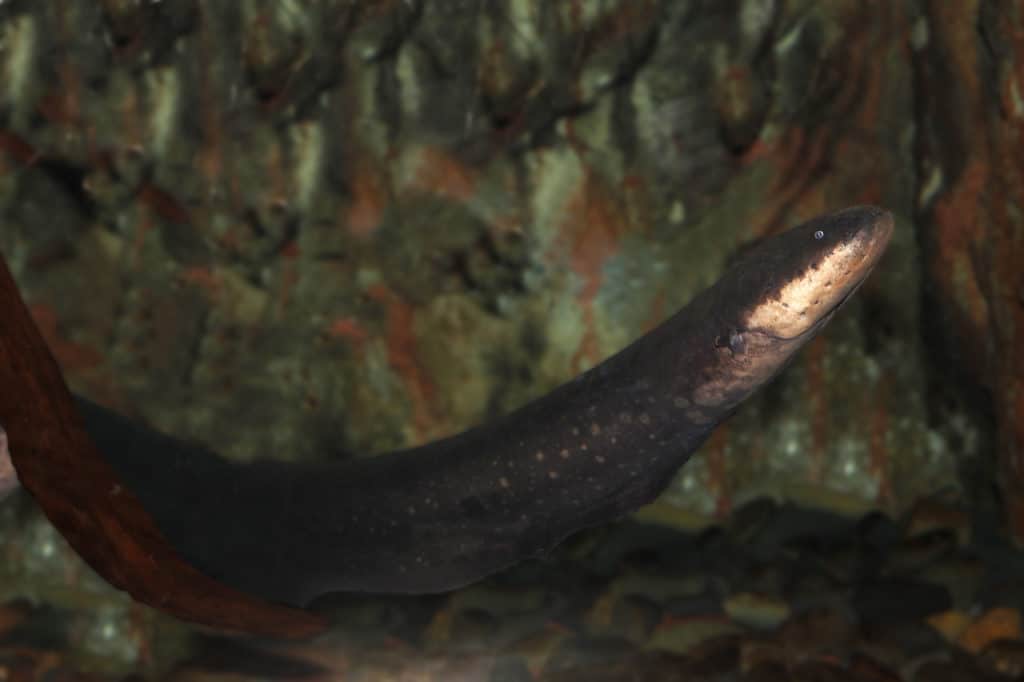 If you fancy keeping something a little bit different from the usual tropical fish and invertebrates that you see in most home aquariums, you might like to consider keeping freshwater eels.

In this guide, we provide an overview of how to care for freshwater eels so that you know exactly what you’re taking on. Of course, each species of eel has slightly different requirements in terms of water conditions, feeding requirements, etc., so we must stress that you carry out plenty of research before taking the plunge and bringing one of these slippery critters home.

Is an eel a fish?

Freshwater aquarium eels are a group of creatures that have long, snake-like bodies. These eels and eel-like fishes are intelligent and curious with a reputation for being escape artists, squeezing through the tiniest hole in your aquarium cover.

The fish that are often referred to as “freshwater eels” actually belong to many families. Some belong to the order, Anuilliformes, which includes the American eel Anguilla and the European eel varieties that belong to the Anguillidae family, all of which are true eels. There are also the Spaghetti eels and Worm eels of the family Moringuidae.

Other freshwater eels are not eels at all but are fish with eel-like bodies. These species include the Spiny eels of the Mastacembelidae family. Then there’s the renowned Electric eel, Electrophorus electrical, which is not a true eel but a kind of knifefish fish that belongs to the Gymnotidae family.

Finally, there are the charismatic and intriguing Rubber eels, which are aquatic amphibians.

As well as their body shape, all these eels live in fresh water.

In this section of our guide, we take a look in more detail at the various species of freshwater eels, and we answer the commonly asked question, “Are eels fish?”

All the fish species that are called eels have long, snake-like bodies, generally without a separate pelvic and dorsal fin. These fish have merged finnage that runs from the caudal along the fish’s body to form a fringe. Most of these unusual fishes have a single gill opening, which is often simply a single gill slit at the creature’s throat.

Eels can range in size from 12 to 36 inches in length, and many are regarded as tasty food in their countries of origin.

There’s just one order of freshwater eels, which is the Anuilliformes order of eels. Within that order, there are two families of eels:

Within the Anuillidae family of eels, there’s just one genus, Anguilla, that includes 19 eels species and six subspecies. Those eel species include Anguilla rostrata or American eel, which is the only true species of eel in North America, and Anguilla anguilla or European eel. All these true eels spend their whole lives in freshwater, although they do return to the sea to breed.

The Moringuidae family of eels includes the Spaghetti or Worm eels, of which there are 14 species that are contained within two genera.

All these eels have very long, cylindrical bodies and vary in size from six inches right up to 55 inches and are found throughout the world in shallow, tropical waters.

There are a few species of true eels in the Muraenidae family that can live in saltwater and freshwater habitats, depending on the stage of their lifecycle, such as the Snowflake eel, although that species is more commonly sold as a saltwater eel.

Many of the so-called “freshwater eels” that are sold in pet stores are actually fish and include:

There are a few fish species that are often referred to as eels, including:

In this section of our guide, we give you a general overview of what you need to know about caring for a freshwater eel.

These are quite shy creatures, spending much of their time hiding underneath the substrate with just their heads poking out, resting in caves, or hiding in the plants. As your eel becomes more confident and grows larger, it may venture out when it detects you near the tank, especially if expecting a feed.

When you’re seriously thinking of buying a freshwater eel, always do your research to find out how large the eel will grow. The eels that you find for sale through online dealers or in your local fish store are almost certainly juveniles that are most likely just a fraction of the size of the adult specimen.

Also, different species grow at different rates, and you will need that information at the time you make your purchase so that you can plan for the tank upgrades that will be necessary to accommodate your purchase. Remember that most freshwater eel species reach between one and three feet in length when fully grown.

Taking on a freshwater eel is a longterm commitment, as these creatures have a life expectancy of between eight and 18 years.

A freshwater eel shouldn’t be kept in a tank of fewer than 30 gallons. Bigger species clearly require more space than that. As a general rule of thumb, a 15-inch eel will need 10 gallons of water, and a larger species that grows to 25 inches will require 20 gallons of water. That said, the bigger the tank, the better it is for your eel.

True eels and eel-like fishes are primarily carnivorous, feeding on mosquito larvae, small crustaceans, fish, and worms. Eels are most active after dark, spending most of their time at the river or lake bottom. Some species are also carrion eaters.

In captivity, some eels can be taught to accept freeze-dried and frozen meaty foods, including bloodworms and tubifex worms, as well as fresh fish. You only need to feed your eels twice a week at the most, and some species only accept food every two to three weeks.

Although the fish eel is mostly a bottom-dweller, they do sometimes venture up to the water surface to breathe air. That can be a problem, as eels are great escape artists, and many species can even jump. For example, Swamp eels have been reported to cross considerable distances on land in nature. So, always seal up any holes or cracks in your tank lid, including around inlet pipes.

When it comes to the aquarium environment, eels like to have holes or caves in which to hide during the daytime, but they also need plenty of open water for swimming. Many eel species, including Spiny eels, like to burrow into the substrate. It’s very important for your eels’ wellbeing that the substrate you choose for their environment is soft and sandy, as eels either don’t have scales or have very small scales. So, a harsh substrate with sharp fragments of gravel could injure your pet.

Be sure to include plenty of live planting in the tank to provide the eel with lots of cover and hiding places.

Eels prefer an environment with dim lighting that replicates their wild conditions. So, you’ll need to use subdued lighting in the tank or include some floating plants to block out some of the light.

Freshwater eels are found in both tropical and cold waters, so you’ll need to check what conditions and water parameters are preferred by the species you decide to buy. For example, if you want to keep what’s often described as a freshwater Snowflake eel, you need to know that this species is actually a marine fish that won’t survive in freshwater, and the same is true of all species of Moray eels.

Some eel species are much easier to care for than others and can be suitable for a beginner hobbyist, whereas others are much more challenging to look after and should only be taken on by experts.

In addition to a heater for tropical species of eels, you will need a very efficient filtration system that keeps the water clean. You’ll need to carry out 30% water changes every week while using an aquarium vacuum to keep the tank clean.

Young eels can be kept together safely in the aquarium, but they may show aggression if you have too many in your tank. In any event, adult eels of most species are solitary in nature, readily predating on slow-moving, small fish. For that reason, you must only keep eels with larger, semi-aggressive fish species. It’s also worth noting that most species of freshwater eels grow too large for a home aquarium setup once they reach adulthood.

Do not put eels in a tank where the community includes invertebrates or frogs, as these will be regarded as a food source by the eels.

Freshwater eels are “naked” in that they don’t have scales. That can leave them vulnerable to attack by certain parasitic infections, such as White Spot disease (Ich), as well as fungal and bacterial conditions, such as gill rot and branchio-nephritis.

Eels can also develop a condition called cauliflower disease that manifests as tumors appearing on the lower and upper jaw.

The best way to prevent disease is by keeping your tank water scrupulously clean and within the preferred parameters of each species.

The breeding habits of most species of freshwater eels are not well-known, and the fish are not currently bred in captivity.

One reason for that is that the eels in the Anguilidae family that can be kept in a home tank, the American eel, and the European eel live in a freshwater environment but return to the sea to spawn. For example, the American eel is known to be born in the Sargasso Sea off Bermuda to spawn, returning as adults to spawn and die.

Although you can find some specimens of the more common species of freshwater eel for sale in fish stores, you will probably need to order examples of the more uncommon ones from online dealers.

Prices for freshwater eels depend on the species and the size of the specimen, varying from $12 right up to $300.

Freshwater eels can be found in many different countries and climates right around the world, some of which are suitable for life in the home aquarium.

You will need a big tank of at least 30 gallons to keep most eel species, and research is necessary before making your purchase. Most eels are best kept as a single specimen in a tank with other large fish or alone.