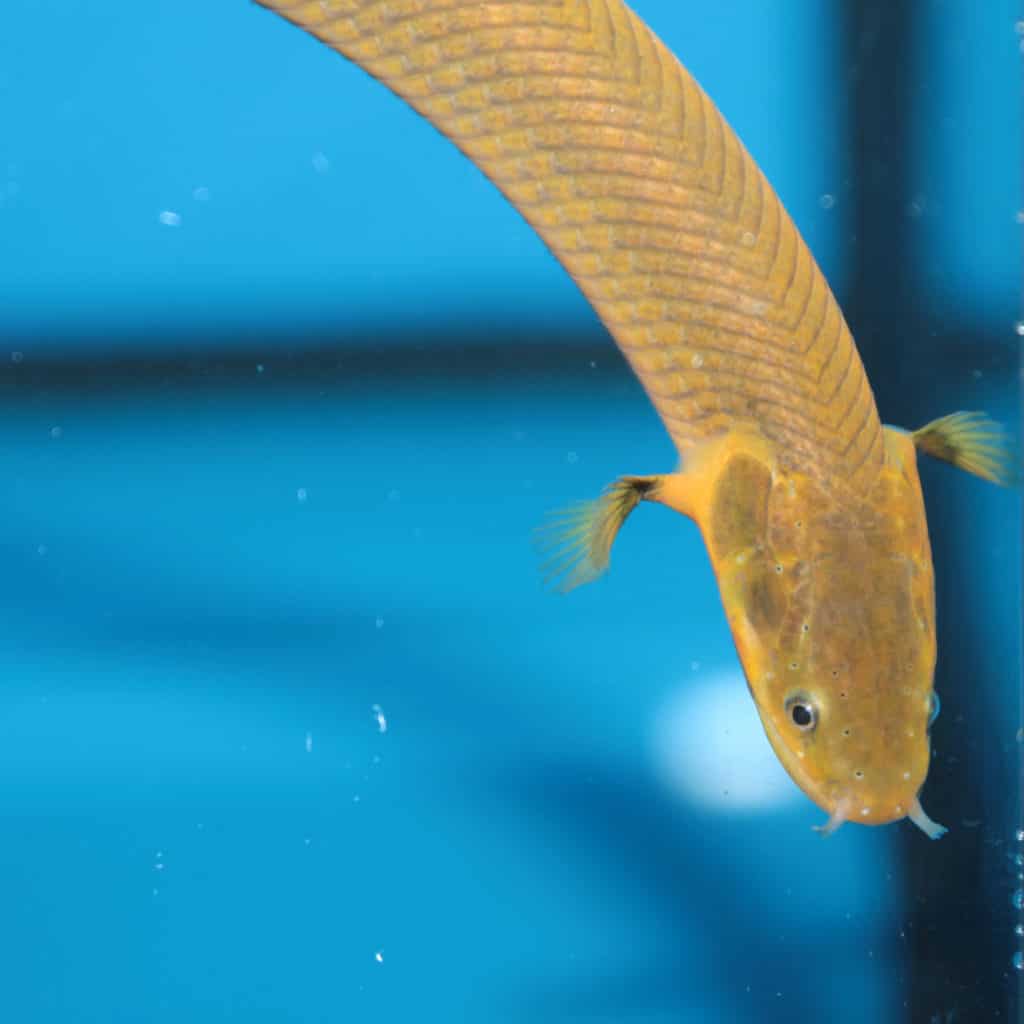 Are you struggling to decide between getting a pet snake or a fish? Then you’ve come to the right place! The ropefish is the closest thing you can get to a pet aquatic snake!

These nocturnal fish are a piece of history, with relatives dating back millions of years. They require a decent-sized tank due to their length but are compatible with much different fish as well as with each other. Interestingly, in the wild, they can thrive in both brackish and freshwater conditions, so the setup possibilities are endless!

Keep reading to find out everything you need to know about ropefish care and keeping one of these fish in your own aquarium!

Fossil records show that relatives of these fish can date back to well over 200 million years ago (in the early era of the dinosaurs), making this a truly prehistoric fish!

The nocturnal ropefish is native to both the brackish and freshwater stand-still waters across many parts of western Africa. They can be found in several countries, including Cameroon, Nigeria, and Benin. The ropefish prefers areas with an abundance of vegetation, especially in low-lying coastal areas with a healthy population of reeds, hence their common name of reedfish.

This species of fish has evolved a lung organ from their swim bladder, which allows them to process atmospheric oxygen as well as dissolved oxygen in the water. While this is mainly an adaptation in response to low oxygen levels, it also allows these fish to emerge from the water for short periods of time to look for terrestrial food; as long as the fish remains most, it will be able to safely stay out. If the ropefish does not have access to additional atmospheric air in low dissolved oxygen conditions, it is possible that the fish could drown.

These freshwater fish are close to being listed as endangered and are currently labeled as near threatened; the water from which they come from has become highly polluted and conditions have quickly deteriorated. However, they are incredibly resilient fish and are not actively harvested as a food source, improving the likelihood that the species will endure the changing environment.

At first glance, these fish really look like a piece of rope or a slithering snake! The ropefish can grow to an impressive 15 inches (37 cm) long and has an eel-like and cylindrical body that resembles that of a bichir. They have large bony scales that create a dark striped pattern down their brownish grey back and a light cream-colored underbelly.

Their pectoral fins are small and close to their flattened head; these fish mainly use their bodies to propel themselves through water and on land instead of relying on their fins. These fins are usually yellow and have a black spot. Their caudal fin is nearly nonexistent as well and seems to only be a finned-extension of their long body.

This long fish needs a long tank! The minimum tank size recommended for these fish is 50 gallons (189.3 L); a long aquarium will be better for your ropefish than a tall one so that there is plenty of room to swim. Every additional ropefish added should have at least another 15 gallons (56.8 L) to itself.

The substrate should be fine-grained and smooth, like sand or mud, as to not damage the body of the fish. Water movement should be low in order to match the conditions where these fish would naturally live.

Ropefish will need a lot of hiding places, as they like to hide during the day and emerge towards dark to feed. Smooth stones and weathered driftwood can be used to make cave systems and crevices for your fish to feel safe. Plants may also be added as these freshwater fish are carnivores and will not snack on vegetation.

Ropefish can be excellent jumpers, so an aquarium hood is essential for keeping your fish safely inside the tank. However, make sure that there is enough space between the surface of the water and the hood so that your fish has the ability to take in atmospheric air if it wants.

Note: If you notice that your ropefish is going to the surface for air more than usual, make sure to check water parameters as soon as possible as this could be an indicator of toxins or low oxygen levels.

Ropefish are naturally found in both brackish and freshwater areas throughout Africa. This means that they will also be able to successfully live in a tank with some salinity levels if desired.

In order to make brackish water, it is recommended to use marine aquarium salt and track salinity values with a refractometer. Salinity values should stay under 1.020 and remain consistent. Since salt does not evaporate with water, daily freshwater top-offs will be needed to keep the salinity from rising. It would be best to ask what kind of water conditions your ropefish is coming from, and then try to match those in your aquarium. It is also possible to slowly transition your ropefish from freshwater to brackish by slightly raising salinity with every water change.

If you’re interested in keeping live plants that can also live in saltier conditions, check out our list of 7 hardy plants for a brackish aquarium here.

Otherwise, these fish will need a stable water temperature between 72-82° F (22.2-27.8° C) with pH between 6.0-7.5; they seem to be especially sensitive to pH swings. Ropefish can be messy eaters and can create a lot of ammonia within the tank, so make sure that your filtration system and filter media can effectively remove waste.

While the ropefish is a carnivore, it is a relatively peaceful species of fish. However, they will not hesitate to eat small fish or invertebrates that can easily fit inside their mouth.

What can ropefish live with?

While you need to be careful and pick appropriate tank mates, ropefish can still live with a lot of different species! Some good tank mates might be:

Especially small fish, like tetras and danios, will quickly become a snack for your ropefish. Aggressive and territorial tank mates, like some species of cichlid, should also be avoided; your ropefish could become stressed and forced to hide most of the time and/or could be outcompeted for food.

Remember that every fish has its own temperament and personality; some fish may do better with other species than others. Never introduce a fish into a predatory tank that you wouldn’t want to lose.

Ropefish have very interesting personalities; they do like to hide the majority of the day though or perch on rocks with just their head remaining visible. Otherwise, they will be propelling themselves through the water with their long body moving like that of a snake.

Ropefish are nocturnal and will come out of their hiding spots at night to look for food. Hobbyists have reported seeing them stick half of their body out of the water, so don’t be alarmed if this happens and make sure that your aquarium hood is tight!

Do ropefish eat other fish?

However, these fish have poor eyesight and if food is scarce, they may take to eating other fish. It is not unheard of for a ropefish to snack on other aquarium fish!

In the wild, ropefish mainly eat insects, worms, and any crustaceans they might come across, like clams or shrimp. Because they do not have good eyesight, they depend on their incredible sense of smell to locate food.

In the aquarium, ropefish will mostly ignore fish flakes, though some hobbyists have had luck with getting their ropefish to accept them. Instead, they should be given an assortment of meaty foods like live and frozen worms (bloodworms, earthworms, etc.), insects, and shrimp.

Your ropefish will most likely be ready to eat once the aquarium lights have significantly dimmed or gone out entirely.

How often do you need to feed ropefish?

Ropefish are able to go quite a while without eating in the wild, but this does not mean that you should not regularly offer food to your fish. Most recommended giving small portions every day while saving larger meals for about every other day.

For many years, breeding rope in the aquarium trade was unheard of; all ropefish that were in the hobby were caught and commercially exported. However, over the past several years, hobbyists have begun to understand more and more about breeding these fish and the conditions that prove to be successful.

As of now, the best way to get ropefish to breed is by providing the best fish care as possible. This means that water parameters should be stable, hiding places should be abundant, the diet should be high-quality, and the male and female ropefish should be compatible. Some believe that slightly raising the temperature and adding long-leaved plants will help encourage the pair.

If successful, the female fish will lay eggs and will hatch after a couple of days. At this point, it would be best to remove the juvenile fish from the tank to keep the parents from eating them. For a couple of weeks, they will get their nutrients from an attached yolk sac. After that, it will be a challenge to get them to accept foods, but start with small particles, like infusoria, and work your way up to larger and meatier foods.

The ropefish is definitely not your typical tropical fish, but they don’t require much more care than a typical guppy. These fish need a moderately large tank and need to have specially-picked tank mates, but their ability to live in both brackish and freshwater makes them an interesting addition to many different tank setups!

If you have any other questions about ropefish or have kept these fish in your own aquarium, don’t hesitate to leave a comment below!