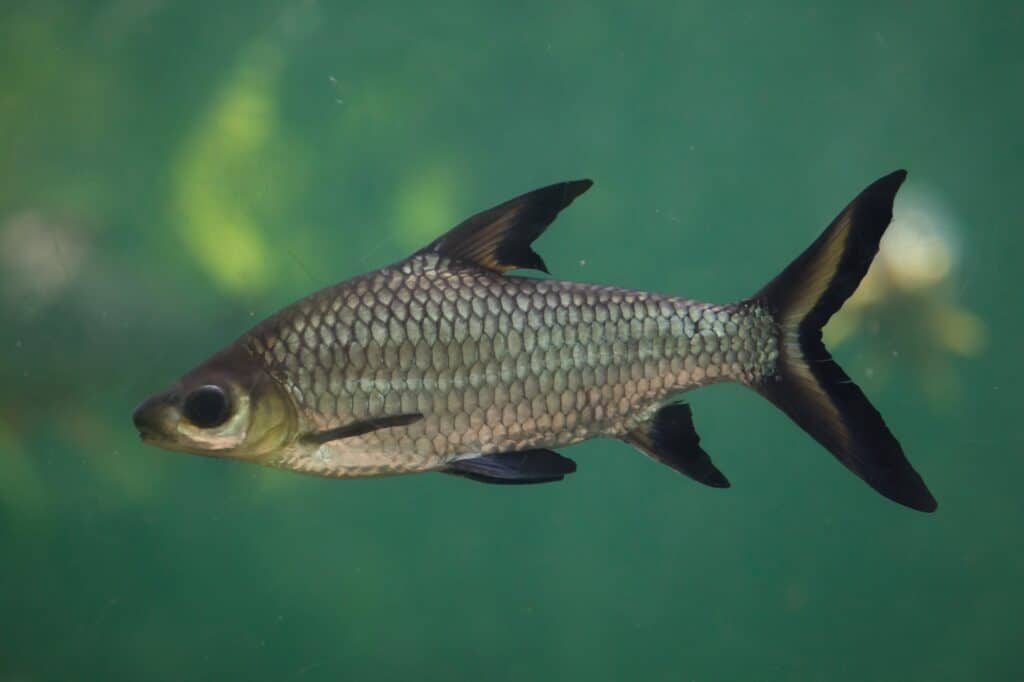 If you have a very large tank and are looking to add an impressive fish to your collection, the beautiful bala shark might be worth considering.

Because of the large size of these fish, we recommend they only be taken on by experienced aquarists rather than complete beginners. To find out how to care for these gentle giants of the fishkeeping world, check out our comprehensive care guide.

Bala sharks are members of the Cyprinidae family of fishes. The shark’s scientific name is Balantiochelilus melanopterus, but they’re more commonly known by many names including silver shark, tri-color shark, silver bala, tri-color minnow, and of course, bala shark.

Note that these fish are not true sharks; the species gets its name from its high dorsal fin and torpedo-shaped body.

Bala sharks, which were first discovered by Pieter Bleeker in 1850, come from Cambodia, Sumatra, Thailand, Kalimantan, and Malaysia, where they inhabit fast-flowing rivers. Unfortunately, this variety of fish has declined by as much as 50 percent in the last decade, and the bala shark is now listed as vulnerable on the IUCN Red List.

Despite the listing by the IUCN back in 1996, the bala shark has continued to decline in numbers in the wild. The reason for the species’ diminishing numbers is not understood, however, the problem is thought to be contamination of the fish’s natural environment.

So, the bala fish you find in your local fish store or for sale online are not caught from the wild. Instead, they’re commercially raised on fish farms in Asia and Eastern Europe.

Bala sharks have a single, upstanding dorsal fin, making the fish look a bit like a shark and giving the species its common name. The fish also has a long, torpedo-shaped body, adding to its shark-like appearance.

How big do bala sharks get?

Wild bala sharks can reach 14 inches in length. However, in the home fish tank, they are generally slightly smaller than that, only growing to be about 12 inches long.

What is the bala shark’s lifespan?

In captivity, the bala shark can live up to 10 years if fed the correct diet and kept in a well-maintained tank.

So what tank conditions do bala sharks need to thrive? You can start off with a 45-gallon aquarium, but you’ll need to upgrade to a larger tank as the fish grows. The ideal tank size is 150 gallons and at least 5 feet long, as that will accommodate this active fish’s swimming habits.

Because these fish grow to be so big, we recommend you allow 45 gallons of water per fish, and because they can be very lively fish who jump when alarmed, you’ll need a well-fitting lid for your aquarium.

The bala shark is a tropical fish, so it needs a tank water temperature of around 77 degrees Fahrenheit. The water’s pH level should be between 6.5 and 8.0 with a hardness of between 10 to 13 dGH.

Bala sharks are happiest when kept in a setup that mimics their natural river habitat, so use a mix of different-sized dark-colored pebbles as substrate.

As far as decoration is concerned, it’s not essential to include lots of driftwood and rocks in the setup. Plants can make a nice addition to the tank, but you should plant them around the perimeter of the tank so you don’t clutter the tank and obstruct the shark’s swimming space.

The bala shark doesn’t have any particular lighting requirements, so a standard aquarium LED lighting unit is fine.

What are good tank mates for bala sharks? Well, to answer that question, you first have to ask: are bala sharks aggressive? The answer to the latter is no. Bala sharks are generally peaceful fish that can live together with the right tank mates.

Your tank mate choices for bala sharks include corydoras, gourami, and rainbowfish. It’s not recommended, however, that you keep large carnivorous species with bala sharks or very small fish that could be viewed as food.

If you want to breed fish in your main tank, you can’t keep sharks in there; they’ll eat the fry. It’s the same story with small shrimps.

Can bala sharks live together?

Yes, you can keep bala sharks together, provided you have a large enough tank. We recommend keeping at least four sharks so larger specimens don’t bully the smallest one, which can happen if you only keep two or three.

Feeding the fish a high-quality diet will ensure they grow to their full size and remain healthy. You can supplement the shark’s basic diet with veggies and diced fruits.

These large fish need a protein-rich diet, so be sure to include plenty of brine shrimp, bloodworms, daphnia, tubifex, and the like. Although you can feed the sharks live food, frozen food is just as nutritious and comes without the risk of parasites and bacteria that sometimes show up with live foods.

How much and how often should I feed bala sharks?

Ideally, you should feed your bala sharks two or three times every day, offering small amounts of food the fish can clear in two or three minutes.

If you’re not around during the day to feed your fish, you may want to invest in a good automatic fish feeder. That way, you can load the food hopper in the device and set the timer to dispense the food while you’re out. Petbank Automatic Fish Feeder - Rechargeable Timer Fish Feeder with USB Charger Cable, Fish Food Dispenser for Aquarium or Fish Tank Check Price on Amazon
We earn a commission if you make a purchase, at no additional cost to you.

Can I feed my bala sharks live food?

Bala sharks do enjoy live foods, but we say proceed with caution here. Never harvest live foods from the natural environment! Parasites and bacteria often find their way into fish tanks through live foods, and that can cause big problems in your aquarium. Always use a reputable supplier for live foods, and always remove the food from the water it came in before giving it to your bala sharks.

If you fancy a challenge, one option is to raise your own food. There are kits available for breeding brine shrimp, which can be a good option if you can devote time and space to the project. Bala sharks are pretty hardy characters, although they can be susceptible to some of the more common diseases that affect all tropical fish. They’re also highly sensitive to poor water quality, so be sure to keep your tank in pristine condition.

Dropsy is a condition to which bala sharks seem to be quite prone. The disease is caused by a bacterial infection and generally attacks fish that are in poor condition.

Fish with dropsy have massively swollen bellies. In severe cases, the fish’s scales protrude, giving the fish the appearance of a pinecone. As the disease progresses, the fish develops skin lesions, its abdominal cavity fills with fluids and swells, the internal organs are irretrievably damaged, and the fish dies.

Ich is also called white spot disease. Fish with ich flick their bodies against solid objects in the tank and, after a few days, a rash of tiny white dots appears on the fish’s fins, gill covers, and body.

Ich is caused by a parasite that’s often present in aquaria, only attacking fish that are already weakened or highly stressed.

There are several external parasites that can attack bala sharks, including flukes, anchor worms, and fish lice.

You can usually see these parasites attached to the fish’s gills or body, and typically, they get into the tank on new fish, plants, or live foods.

Your fish tank is home to many species of bacteria. Some of them are necessary for your biological filtration system to function properly, however, others can attack weak or sick fish or enter the fish’s body via external injuries.

Most common fish diseases can be successfully treated if spotted early enough, using a suitable medication that you’ll get from your local fish store.

The best way to keep disease out of your tank is to quarantine any new fish for at least 10 days. Once you’re sure your newbies are healthy, you can add them to your main setup.

Wash any new plants and decorations in an antibacterial solution to kill any bacteria and parasites that could be lurking there.

Breeding bala sharks is quite easy, provide you can set up a large spawning tank.

Male sharks are a little larger than females, and female balas tend to be slightly plumper than males.

Before you can begin breeding your sharks, you need to prepare the fish. Take several juveniles of around four months old and put them in a separate aquarium of at least 65 gallons.

The water temperature in the tank should be around 77 degrees Fahrenheit. These fish need plenty of space in the tank, so you’ll need to put your plants and decorations around the perimeter of the setup. If you intend to keep the fry in the tank, leave the bottom free of a substrate, and, although it’s non-essential, putting a spawning net on the tank bottom will make life easier.

You can stimulate the spawning process by slowly increasing the water temperature to around 82 degrees Fahrenheit. Make sure to increase temperatures gradually so you don’t stress the fish.

Bala sharks generally start spawning early in the morning, and the process often continues for a few hours. Once the female fish drops her eggs, the male fertilizes them.

It’s essential the water flow in the tank is good, as that helps distribute the male’s milt more widely across the eggs. Use an internal sponge filter so no vulnerable fry are sucked into the filtration unit.

Once the spawning process is complete, you need to take the parents out of the tank.

You’ll also need to remove any white spawn from the tank. Those eggs are unfertilized and must be taken out before they develop fungus that will pollute the tank. At the same time, change 30 to 50 percent of the water and add antibacterial medication to the tank.

The larvae should appear within 24 hours, becoming fry after three to four days. At that time, you can feed the fry baby brine or cyclops shrimp. Keep a close eye on the fry as individuals develop at different speeds, so you may need to separate the larger ones to prevent the smaller fish from missing out on food.

You can buy silver sharks in most good fish stores or online for a few dollars each. Often, larger specimens are available, but these are generally more expensive than smaller ones.

The bala shark is a beautiful fish that makes a striking addition to any aquarium. These are peaceful fish that fit in well in a community and are safe to keep with other non-aggressive fishes and large types of invertebrates.

However, these fish can grow up to 12 inches long, and larger individuals may eat very small fish and shrimp. You’ll need a very large aquarium with plenty of swimming space to accommodate these fish.

If you have space to fit and time to maintain a large aquarium and you’re an experienced fish keeper, the stunning silver shark might make a good choice for you.