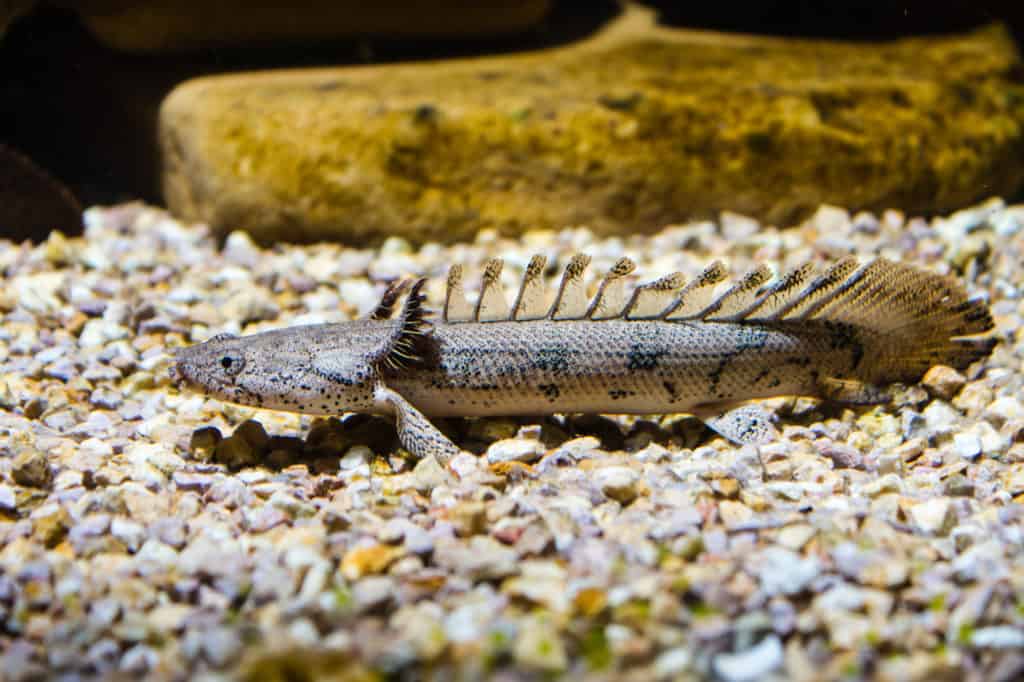 Have you ever wanted your very own species of prehistoric dinosaur? While you can’t go to the pet store to pick up a triceratops, you can pick up a dinosaur bichir! These armored fish look something like a mix between a dragon and an eel and definitely make for an interesting freshwater aquarium fish. As a predatory species that require special tank consideration due to their large size and demanding diet, these fish cannot be kept in a community tank and need an intermediate to advanced experience level to really thrive.

Polypterus senegalus is commonly known as the dinosaur bichir, Senegal bichir, Cuvier’s bichir, grey bichir, dragonfish, or dinosaur eel. However, the last name is actually incorrect as this bichir species is still considered a fish, despite their long body.

Dinosaur bichirs are part of the Polypterus genus, which contains 13 species in total; their genus name actually stems from “many wings” or “many fins.” Fossils from early ancestral species of the dinosaur bichir have been traced back to 200 million years ago.

Dinosaur bichirs are one of the most widespread species from Polypterus, occurring in more than 26 African countries, including the major Nile River system; these countries include Egypt, Kenya, Nigeria, and Senegal (hence their Senegal bichir common name). Here, these fish usually live in the shallows of slow-moving and tropical freshwater lakes, floodplains, and swamps. The water temperature remains between 75-82° F (24-28° C) with a fairly neutral pH range between 6.2 and 7.8. These fish tend to live in softer water.

Dinosaur bichirs often live in murky water with poor visibility. Because of this, their eyesight is not the greatest, but they’ve adapted by having a great sense of smell and are able to detect electrical currents through the water to hunt for smaller fish and other food; the size of the food does not matter too much, as long as it can fit in the bichirs’ mouth.

In the wild, the life expectancy of bichirs is unclear, though they may live up to 30 years in captivity if exceptional aquarium care and favorable water conditions are provided.

These long fish are pretty easy to identify as they quite literally look like an ancient dinosaur fish. Dinosaur bichirs are one of the smallest species of Polypterus, but can still grow up to be 20 inches (50 cm) long. They have a grey/beige body that may have random darker blotches across it. Dinosaur bichirs feature a long, serrated dorsal fin that they have the ability to fully extend or lay flush on their back. These bichirs also have two pectoral (side) fins that help them push themselves across the bottom of the aquarium where they live.

Interestingly, dinosaur bichirs have adapted the ability to breathe air and can remain out of water for some periods of time as long as they stay moist. This also means that dinosaur bichirs can actually drown if they are cut off from an oxygen supply. This ability most likely evolved to help dinosaur bichirs live in murky water with low oxygen levels.

Dinosaur bichirs also have a modified swim bladder, which helps many fish species to maintain buoyancy in the water, and have formed primitive lungs instead. This means that you’ll often witness your bichir swimming to the surface of the water to take a gulp before returning to the bottom of the tank.

These dinosaur fish also have incredibly armored skin that has actually been studied for creating better protective armor with increased mobility.

While dinosaur bichirs seem to be the most common species of bichir due to their manageable size (in comparison to other bichirs), you will most likely come across these other bichirs that could work for your tank as well:

Because of the water conditions that they are naturally found in, dinosaur bichirs are actually a very hardy species of fish. However, it is important to keep in mind that bichirs get very large and are excellent escape artists; this means that not only will you need a lid for your aquarium, but you also need to make sure there is a gap between the water surface and the tank lid as well so that your dinosaur bichirs can still breathe.

That being said, dinosaur bichirs require a tank size of at least 90 gallons (341 L); that is a huge tank, but these are very large fish. It is very common for fish keepers to put their small dinosaur bichirs into a 40 gallon (151 L) tank with future plans of upgrading to a large enough tank size. We strongly don’t recommend this as upgrading an aquarium is easier said than done and often times the now large dinosaur bichir is left without a tank to call home.

Since dinosaur bichirs spend most of their time on the bottom of the tank, it is important to use a substrate that won’t scratch them; a sandy substrate will work great for your fish! You can also add driftwood for your dinosaur bichir to hide under in the tank, though these fish don’t seem to care either way if the tank is sparsely decorated or not.

If you have a large enough fish tank size and can guarantee that your dinosaur bichir will have a home for the rest of its life, then the next step is maintaining ideal water parameters. The best way to do this is by matching the conditions of the water that would naturally live in. To keep your dinosaur bichir happy, maintain a tropical water temperature between 75-82° F (24-28° C), a pH between 6.2 and 7.8, and keep the water soft with a KH between 5 and 20 dKH.

Though these bichirs are hardy fish and don’t require too much additional care, it is always important to maintain stable water conditions. Make sure to do weekly or biweekly partial water changes on your tank so that new water is adding nutrients while removing any nutrient buildup.

Dinosaur bichirs are one of the more peaceful species from its genus, but that isn’t to say that they are not aggressive fish; remember, bichirs are large carnivores and will eat any small fish they come across. They should never be trusted in a tank where they can easily eat their tank mates.

Other than being wary of their diet, the dinosaur bichir is actually a very active species of fish for its size. They like to push themselves along the bottom of the aquarium with their pectoral fins and will often be seen going to the surface of the water to breathe. This makes them a fun bottom-dweller that doesn’t just stay hidden all day long.

It’s also important to keep in mind that bichirs are nocturnal, so they’ll actually be more active at night looking for food than during the day. However, it is not unheard of to slowly acclimate a bichir to become more present in the tank during the day.

So if bichirs are likely to eat any other fish that is kept with them, can you get tank mates for your dinosaur bichir tank? Yes, you can!

It is best to consider fish that are larger than the size of your dinosaur bichir’s mouth and can hold their own in a tank. Good tankmates include other bichirs, knife fish, oscar fish, Jack Demspey fish, and flowerhorn cichlids.

If you don’t feel like taking the risk of having tank mates with your dinosaur bichir, there are always plants. Your dinosaur bichir probably won’t care too much about the appearance of its tank and won’t take any interest in plants as they are in search of meaty food. Feel free to add as many easy or hard freshwater plants as you want to your bichir tank!

Because bichirs are carnivorous fish, they need a diet filled with a variety of high protein food; their diet is what makes them more difficult than other freshwater fish as the typical fish flake and pellet will not ensure good bichir health. However, some bichir keepers have had luck supplementing cichlid pellets.

Bichirs need a large assortment of living, frozen, and freeze-dried food, such as bloodworms, shrimp, brine shrimp, earthworms, and other small fish. While the dinosaur bichir is a nocturnal fish species, it is possible to change when they eat. At first, offer food shortly after the tank lights go out. Continue changing this time to a little earlier each day until the food is accepted at a suitable hour. Though this may work for your own convenience, it is still highly recommended to allow your dinosaur bichir to eat at its natural nocturnal feeding time.

Also, remember that your dinosaur bichir does not have good eyesight. You may drop the food into the middle of the tank and your fish will surely find it by using its sense of smell to scan the water.

However, dinosaur bichir breeding has been studied in the wild, and a little is known about their habits. This fish species breeds during the rainy season and it is believed that changing water temperatures and lower pH levels help promote spawning behavior. During this time, the male bichir will chase the female while gently nudging her.

If he is successful, then the female bichir will deposit her eggs at random on the bottom of the tank. At this point, it would be best to remove the adult bichirs from the tank, as they would most likely eat the eggs. After 3-4 days, the eggs would hatch and turn into tiny baby bichirs three days later.

Some say that baby bichir are not very mobile, so food and feeding habits should be closely monitored. Their diet should mainly consist of brine shrimp and micro worms.

Because of how difficult it is to breed dinosaur bichirs in a tank set, most bichirs that you see in stores are wild-caught. This also means that they most likely won’t be too easy to find and may need to be specifically ordered.

Since this species is typically wild-caught, they also pose the threat of infections and parasites. It is highly recommended to quarantine your dinosaur bichir for a few weeks until certain that there is no external threat to your main display.

While small dinosaur bichirs may look manageable in the tank at the pet store, it is always important to remember their adult size (20 inches/50 cm) and how long they can live (up to 30 years)! If you’ve made sure that your tank size and setup will accommodate a bichir, then the next step is picking a healthy fish. Don’t be afraid to ask to see the bichir eat; this way, you’ll be sure it has an appetite and you’ll get a sense for the food that is being offered and accepting.

If you’re looking for an uncommon freshwater species that looks prehistoric, then the dinosaur bichir is definitely worth considering. While they’re relatively easy to care for in terms of tank setup and water parameters, their large tank size, potential adult size, specific diet, ability to live a long time, and restricted tank mate choices make dinosaur bichirs a more specialized species to keep.

As long as you provide a soft substrate and stable water parameters, you will have a pet dinosaur bichir for a very long time!