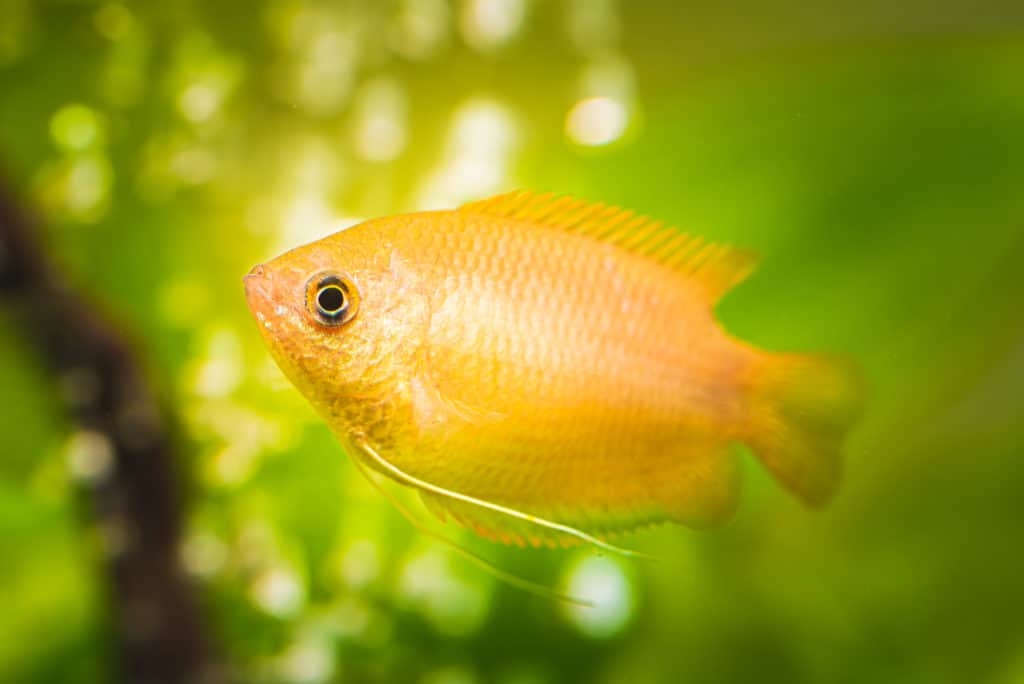 Gouramis are one of the most popular aquarium fish species and for good reason! These Anabantoids (closely related to bettas) are a great new addition to the top water layer of a peaceful community aquarium with their interesting behavior and often striking colors.

There are many different gourami types available in the tropical aquarium trade nowadays, so keep reading for a list of information regarding the most popular gouramis and find out which one best suits your home aquarium!

Previously referred to as Colisa chuna, honey gouramis are named after the very striking orange-yellow color found on the male. They are a relatively small gourami species, only reaching a maximum size of about 2.8 inches (7 cm). This makes them suitable for smaller setups; a rectangular tank of at least around 15 gallons (57 L) is good for a pair. Peaceful tankmates, such as Corydoras species, will feel right at home next to these fish!

Like all gourami, these fish love relatively soft, dark, acidic water with plenty of cover. Floating plants will be appreciated and you can add some Indian almond leaves that release tannins to stain the water and imitate their natural habitat. Be sure to baffle your filter–these fish live in relatively stagnant waters and don’t appreciate a strong water flow. Like all labyrinth fish, they also need to have access to the surface to breathe air.

Chocolate gourami is a collective name for a few mouth-brooding fish in the genus Sphaerichthys, although Sphaerichthys osphromenoides is the most popular and also considered the easiest variety to care for. This doesn’t mean they’re suitable for any community tank, though; many aquarists choose to keep these feisty fish in a single-species setup or in a carefully chosen peaceful community with tankmates that prefer similar water conditions, like rasboras.

Chocolate gouramis can be kept in relatively small aquariums since their adult size is only 2.4 inches (6 cm); a rectangular tank of at least around 15 gallons (57 L) should be enough. You can keep these fish in pairs, but a group is also a good option, especially if you’re interested in breeding! To set up a successful new tank for your chocolates, keep in mind that they love a densely planted setup with stained water, so don’t go easy on the aquarium plants.

Pearl gouramis (also known as diamond gouramis) are named after the bright, pearl-like spots that cover their entire body. They are a stunning variety with the male having a striking orange-red color gradient to its belly. Unfortunately, unlike the two species mentioned previously, these fish require a slightly larger tank to provide adequate care; an aquarium length of at least 1 meter (3.3 ft) is recommended.

Pearl gouramis make great fish for densely planted community aquariums, but prefer to live only with peaceful tankmates. There are several options you can choose from on this list! Pearl gouramis are usually kept in couples or small harems; keeping more than one male together can cause some territorial issues unless the tank size is relatively large and densely planted.

If you’re looking for a new fish with striking colors and interesting behaviors, you’ve found it! Licorice gouramis are definitely not the most common gourami species in the tropical aquarium hobby and not the easiest either, but if you’re interested in setting up a new biotope tank without tankmates, this may be the fish for you.

Licorice gouramis are one of the smallest gourami species, only reaching about 1.5 inches (3.8 cm); a pair can comfortably be kept in a 10 gallon (38 L) aquarium. The light should be dim, so staining the water and using several floating plants is a good idea. Because dense planting is appreciated, make sure to go for very low light plants such as Java fern. To imitate the natural habitat of your licorice gouramis, use very soft and acidic water and keep water flow to a minimum by baffling your filter.

Water quality should be pristine and the tank should be fully cycled, as these colorful little fish are very sensitive!

Undoubtedly the most popular species available in the aquarium trade, the brightly colored dwarf gourami is unfortunately often the victim of improper care and lack of knowledge.

Although they are a smaller variety, dwarf gouramis are not suitable for very small new aquarium setups; a 15 gallon (57 L) long tank is recommended for a single pair. These fish are not a great choice for just any community, as they can be both territorial and shy. They will do best with calm, peaceful tankmates like kuhli loaches. As with all gouramis, a densely planted tank with relatively soft, acidic water is appreciated.

A common problem with these fish is that they are bred on a massive scale causing the stock to be low quality and, more alarmingly, contaminated with dwarf gourami iridovirus. This means you should always have a close look at any new dwarf gouramis you might be considering!

This tiny fish is known as the dwarf croaking gourami because they are the only variety able to produce an audible noise: these fish can croak! This interesting trait, combined with the fact that they can be kept in 10 gallon (38 L, rectangular tank) setups, makes them a popular choice for small, well-planted setups.

Keep these fish in pairs or small groups; in slightly larger aquariums, you can also go for peaceful tankmates, such as rasboras. Be sure to densely plant the tank and use a baffled filter.

Blue gourami, also known as three spot gouramis, are one of the larger species. They are available in other color varieties, such as gold or a marbled blue, so don’t be confused if you see an entirely different looking fish labeled as Trichopodus trichopterus! A tank of at least 1 meter (3.3 ft) is recommended for a pair or small harem of these fish. Keeping more than one male together in a tank is not recommended, as they can become quite territorial.

Blue gouramis are not the best community fish, although it’s not entirely impossible to keep them with tankmates. Nippy fish, such as some barb species, are not recommended as they may try to nibble at the gourami’s long ventral fins and very small tankmates may be eaten or damaged themselves. Other gouramis, loaches, and larger schooling fish are a better choice.

As with all gouramis, a densely planted tank is appreciated. Be sure to always keep in mind that these fish need access to the surface to breathe air (more information on surface breathing).

This list doesn’t include all gourami species available in the aquarium trade, as there are many more: moonlight gouramis, thick-lipped gouramis, and even the giant gourami! However, information was given for these several species because they are the most popular and most likely to be found in your own aquarium store.

If you have any more questions about keeping these gourami species or want to share your own experiences, don’t hesitate to leave a comment below!