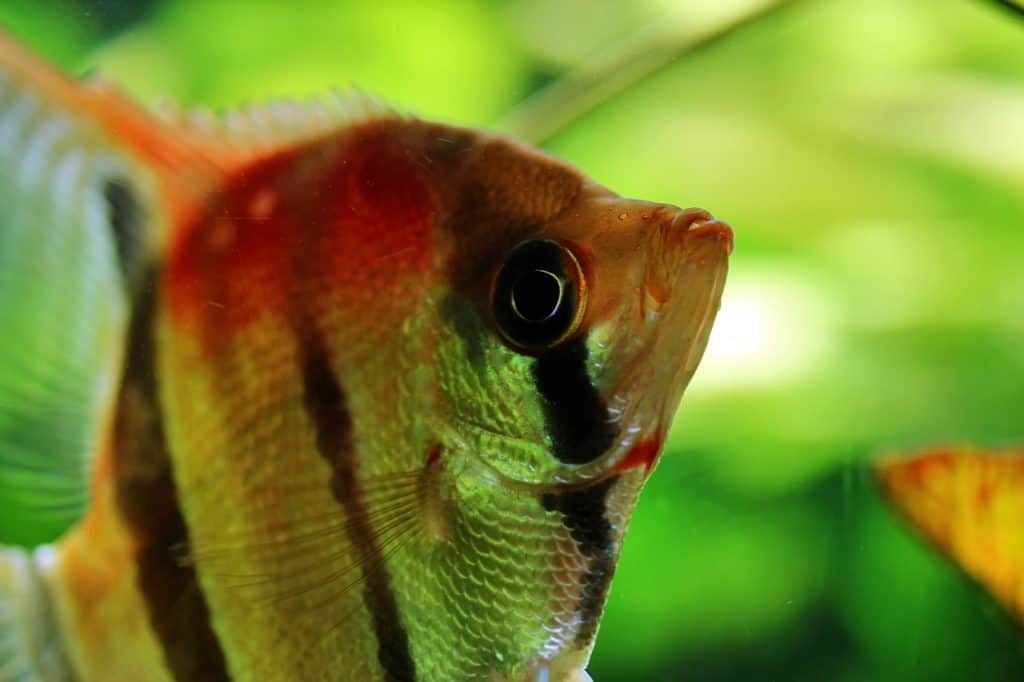 You’ve probably seen some little adorable angelfish at your local fish store; they can be blue, orange, gold, or just about any other color variation, and could make a great addition to your freshwater aquarium. In order for them to thrive and get along with the other fish in your aquarium, there are a few key things you need to know before introducing an angelfish into your community fish tank.

Keep reading to find out everything you need to know about keeping angelfish and potentially breeding these beautiful freshwater fish in your own aquarium!

Freshwater angelfish have been a staple of the aquarium hobby for decades. They are said to have gotten their name from the silhouette they create when turned on their sides and graceful movements through the water, looking like a true ‘angelfish.’

All three of these angelfish species originate from South America, in various freshwater rivers and tributaries including those from both the Amazon River and Basin as well as the Orinoco Basin. The temperature of the water remains between 75-86° F (24-30° C) with a neutral pH. The water is typically very calm and often has good live vegetation coverage.

If your angelfish is well taken care of and given the right tank size and water conditions, you can expect it to live up to 10 years and possibly even 15 years in exceptional cases.

P. scalare (also referred to as just ‘scalare’) is the most popular of the angelfish and is carried by just about every fish store you go in. Selective breeding of these fish has given us almost every color variation imaginable for this variety, with different scales and fin types as well.

Silver is the most common color, with blue, orange, albino, and gold variants also being widely available. Regardless of the color or finnage you choose, the aquarium care for Pterophyllum scalare is the same for any of the species.

Most freshwater angelfish you find in fish stores are about 3-4 months old, with a small fish being about the size of a quarter and a large one being more like a silver dollar. While small and adorable, those little fish don’t stay juveniles forever. This is also important to keep in mind if planning on setting up an angelfish tank.

Angelfish get to be 6 inches (15 cm) long from nose to tail with most of an angelfish’s growth taking place within the first year of their lives. While a small fish might look like it’d fit perfectly into a 10 gallon (38 L) tank in the fish store, it’s not a good plan as they get very large very quickly.

You have a few options when picking out a new fish for your freshwater aquarium; P. scalare come in a variety of scale and fin types, including:

When they are small, P. scalare is loosely gregarious fish that rely on numbers to feel safe, but as they age, they become more solitary. If you’re thinking about keeping a group of 4-6 angelfish, an 80 gallon (303 L) long aquarium should be the minimum size to house them. One angelfish would do okay in a 20 gallon (78 L) tank, but a 30 gallon (114 L) tank would be even better.

Freshwater angelfish live in soft and acidic water. However, P. scalare that have been raised in a tank setting tend to be hardy fish that will accept a wide variety of water conditions. While this is true, make sure to keep the water parameters of your tank close to those that would naturally be found in the wild with a pH of 6.0-7.5 and varying degrees of water hardness.

Angelfish will live happily in an aquarium with water temperatures between 75-86 °F (24-30 °C), making them able to handle high water temperatures that would normally stress most other fish. Ideally, though, keep the water temperature under 82 °F (27.5 °C) in the community aquarium to keep all fish happy. Water changes should still be performed weekly or biweekly and the filter should be regularly maintained to replace trace nutrients in the tank and also help maintain ideal water parameters.

Angelfish will also look spectacular in a planted tank! Some planted aquarium keepers have seen their fish nibbling on plants, but most report no problems; more specifically, the only problem they really seem to have with their angelfish is them eating smaller fish, which we will discuss later.

Angelfish are not picky eaters: if it moves and can fit in their mouth, it’s fair game as food. These fish will happily eat freeze-dried, frozen, and live food with enthusiasm. In fact, if your angel ever goes on a hunger strike, it’s a good indication that something is wrong with your fish; if this happens, make sure to look for any sign of disease and immediately check water parameters. Brine shrimp, blood worms, and tropical flake are great choices to include in your angelfish’s diet to add some variety; one way to meet this live food demand is by cultivating your own brine shrimp so that you always have food for your tank!

These fish will feed at any water level of the aquarium and are always trying to be the first to the food. They’ll also forage along the bottom of the tank, carefully looking for any food that may have fallen to the gravel between meals.

Young angelfish (less than 6 months) can be fed up to three times daily. Adults only need to be fed up to twice daily unless conditioning for breeding.

P. scalare can be prolific breeders, and begin maturing around 6-9 months old. Angelfish are monogamous breeders and will pair up with one mate; you’ll notice that angelfish become territorial during spawning times, especially towards other angelfish. However, it is very difficult to tell the males apart from the females, so the only time you will be certain is during these times.

Angels like to lay eggs on near-vertical surfaces and have been known to lay these eggs on filter intakes or even aquarium glass when they can’t find a suitable surface. Try to provide your angelfish with a piece of slate rock positioned vertically in the aquarium or a breeding cone. You’ll notice that they’ll gravitate towards it very quickly. Your pair will lay eggs every 7-14 days depending on your water temperature; water changes can also be used to help initiate breeding.

Although getting angelfish to breed is very easy, hatching their eggs and raising the fry can be a little more difficult. It can take 48-72 hours for eggs to hatch into fry, and this is directly dependent on the water temperature. As a rule of thumb, at 82 °F (27.5 °C) the eggs will hatch like clockwork at the 48-hour mark.

Although angelfish look after their eggs very well, there is always a chance that other fish and/or invertebrates in the tank will get the chance to make a quick meal. If you really don’t want to lose some of the eggs or the fry, remove the pair and place them in a separate breeding tank until the eggs have hatched. Allow the fry to grow until they are large enough to join the main display aquarium. Even by separating your breeding pair, it is always possible to lose one or two new fish.

Young angelfish (less than 6 months and still small) will most likely get along with all freshwater fish in a community tank. They’re inquisitive little fish that like exploring their environment and can be found exploring throughout the entire tank. They should be kept with other peaceful fish and can also be mixed with other angelfish.

As they age, you’ll notice that angels start to peck at one another; this is their way of trying to establish a personal space within the tank. This eventually turns into them defending part of the aquarium from other angelfish as they get ready to breed. Unless housed in a sufficiently large aquarium (>4ft/120 cm long), make sure to remove the breeding pair as they’ll violently attack other fish.

Since angelfish do grow to a large size, the other fish in the tank needs to be large enough so that they aren’t able to be swallowed. For a full-grown P. scalare, Otocinclus catfish, neon tetras, cherry shrimp, and other small creatures can easily be mistaken as food. Just remember: if it can fit into the mouth of your fish, it will end up in there eventually; maybe not today, maybe not tomorrow, but definitely one day when you accidentally miss a feeding and they take matters into their own… fins.

There is nothing more serene than watching an angelfish effortlessly float by in an aquarium. While these fish can get large and should be provided a big enough aquarium for their potential adult size, they definitely bring the wonder of the Amazon River into the home. Just make sure that you don’t add any small fish into your angelfish tank that could easily be eaten.

This angelfish care sheet is a guest post by Andrei Vexler, an aquarist with over 20 years in the fish husbandry hobby. Having run a fish room with over 700 freshwater and saltwater aquariums, Andrei found his passion in South American cichlids, particularlywith P. altum angelfish. Growing and wholesaling angelfish in Canada through www.angelfishcanada.com he also shares his years of experience in his blog for advanced aquarists.

If you have any more questions about angelfish care or want to share your own experiences with this spectacular cichlid, don’t hesitate to leave a comment below!