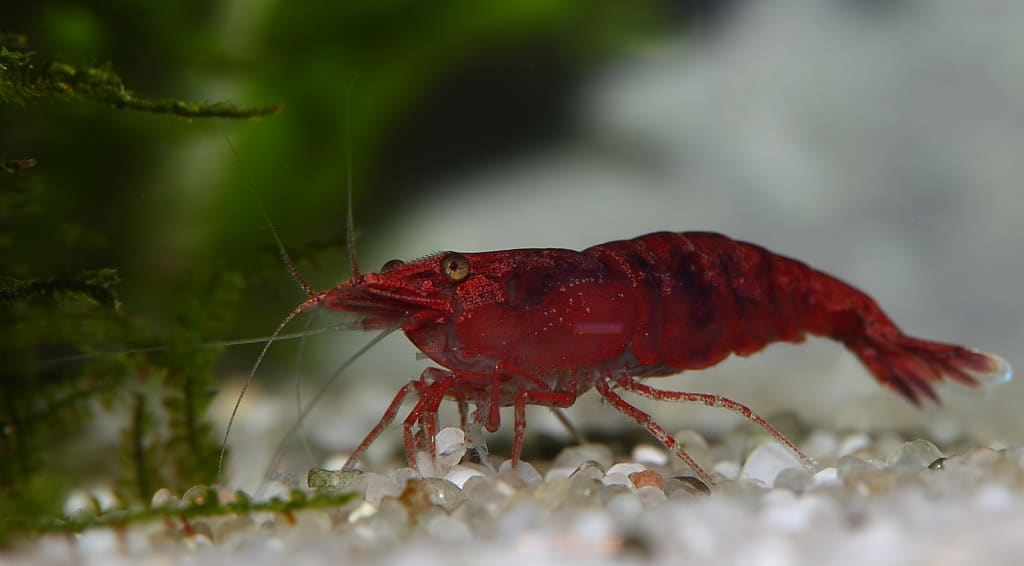 Cherry shrimp are a type of dwarf shrimp appreciated by many aquarists for their bright colors and easy care. If you’re looking for a clean-up crew in your planted aquarium, a new breeding project, or just a fun addition to a peaceful community tank, these shrimp make a great choice!

Keep reading for everything you need to know about cherry shrimp care and breeding in your aquarium.

While their exact origin of evolution is unknown, these small freshwater shrimp are mostly found throughout Taiwan in clear running water with lots of foliage. A planted terrain provides protection for both adults and juveniles and cultivates algae and other biofilms. In ideal conditions, cherry shrimp will live up to 2 years but average only the first year in an aquarium setting.

Cherry shrimp can be very valuable in the aquarium hobby depending on the quality of color. They can be yellow, blue, green, violet, chocolate, black, white, transparent (ghost), or red, which is the most sought after variation with especially deep reds being the most valuable. However, in the wild, they will most likely be brown or transparent in order to better blend into surrounding plants and algae.

No matter size, these shrimp have adapted to match their backgrounds and substrates. A light substrate will cause your shrimp to become lighter or fully translucent; a dark substrate will help bring out their brightest colors. The quality of food available, water pH, and temperature also dictate the color you get from these freshwater shrimps. With ideal conditions and proper care, you can determine how red your shrimp will end up being in your tank!

Cherry shrimp are a dwarf shrimp species, which means they stay small. Female cherry shrimp can grow to a maximum size of around 2.5 cm (1 inch) with males staying much smaller. Males also have a less vibrant color than female cherry shrimp and have narrower tails since they do not need to carry eggs.

Not all cherry shrimp have the same degree of coloration. Selective breeding and special care result in deeper colored shrimp. Allowing a colony to breed freely causes their reds to eventually fade. Regardless, female cherry shrimp will always have a more intense color. Cherries that are a more opaque red are considered a higher grade and will be more expensive and less readily available. They’re not “better” than other cherry shrimp, it’s just a matter of preference.

It should be noted that colored varieties of this species are unique to the aquarium hobby with red being the most desired. Wild freshwater shrimp are typically brown with light or clear patches. Shrimp with wild coloring are typically referred to as a “wild type” shrimp. However, this doesn’t mean that the shrimp itself is from the wild – it only refers to the color!

Cherry shrimp care is relatively easy as they can live in a wide variety of environments. These freshwater shrimp should be kept in groups of at least 5 in order to prevent conflicts over dominance. A large colony may thrive in a big community tank so long as there are no hungrier fish that can fit a shrimp in its mouth! These small shrimp especially shine in a planted nano aquarium with lots of natural driftwood. Because of their size, it is actually recommended to have a species only tank with just cherry shrimp; their stark red color will really pop against the luscious plants in your aquarium!

Cherry shrimp may be kept in as small as a 5 gallon (19 L) tank, so long as you take care not to overstock it and allow for natural breeding. If you’re stocking cherry shrimp for a larger tank, it’s recommended to get 2 to 5 individuals per gallon (3.5 L) of water. Under ideal conditions, they’ll breed fast. Unlike fish, they can live in a small tank like the beverage dispenser tank!

Be sure to always cycle your tank before introducing any new freshwater shrimp, as they are extremely sensitive to any ammonia and nitrites. Weekly water changes are needed to reduce the number of nitrates. Make sure to match the new water to the old conditions, both in temperature and water parameters. Medication that contains copper isn’t a good idea either, as it’s unfortunately deadly to shrimp even in small doses.

Are cherry shrimp hard to keep?

While easy to care for, all species of cherry shrimp require some special tank modifications. Most importantly, they require a sponge filter so that you are able to maintain a clean tank without having your shrimp sucked up. The filter will not only keep your water quality good, but the sponge will also act as an additional surface area for your shrimp to graze on. Adequate lighting also needs to be considered for your plants to thrive and for your shrimp to display its best red coloring in your tank!

As long as they’re provided with plenty of hiding spaces like coconut hides, patches of Java moss, and other freshwater plants, cherry shrimp can be kept in aquariums with larger fish. Even if the occasional shrimp ends up as a snack, the colony will likely breed faster than the predators can eat them. Keep in mind that it’s still always a gamble, but good bets are freshwater snails, catfish, and small tetra species. Fish that are very focused on hunting (cichlids, bettas, puffers) might be able to wipe out an entire colony as well as your plants.

If you want to have a simple freshwater aquarium with lots of plants and bursts of color, then you may also house your cherry shrimp with other types of shrimp. Cherry shrimp may be kept with ghost shrimp, vampire shrimp, or Amano shrimp.

If you want your cherry shrimp to be the centerpiece of the tank or if you want to breed as much fry as possible (to sell to other aquarium hobbyists or to have as live food), a dedicated aquarium with only very peaceful fish like Otocinclus(Otocinclus spp.) or Pygmy Cories (Corydoras pygmaeus) is probably the best idea. That way, the shrimp will be able to breed quickly and forage out in the open without being stressed, so you’ll see them more often.

Cherry Shrimp are naturally omnivores that feed on biofilm and thrive in planted ecosystems. In the aquarium, they will accept almost any type of food they come across, which is why they make a great clean-up crew. In a community tank, they can live off leftovers from other fish and tiny particles they find in plants and algae patches. Specialized shrimp food, algae pellets, and blanched vegetables can also be given occasionally and will be much appreciated by your shrimp.

In a single species tank, it’s a good idea to feed only a small amount of food every day. Take care to remove any pieces of food that aren’t eaten within a few hours, as they can cause dangerous ammonia spikes when left in the tank for too long. It is also a good idea to clean your filter sponge regularly of any debris so it doesn’t get clogged and continues to function properly.

When your shrimp sheds its exoskeleton, it may be tempting to take it out from the tank, but don’t! Cherry shrimp can eat the shed and regain essential nutrients. It is easy to tell a molt from a dead shrimp as the exoskeleton will be a more transparent red than that of the living shrimp.

Cherry shrimp are an extremely peaceful and easy to keep species, making them a great addition to your aquarium. They spend most of their time foraging and searching for food, bringing movement to the bottom of your tank. Pregnant females can also often be observed waving fresh water over their eggs to supply them with oxygen from time to time, but will most likely be hiding under plants or near the back of the tank.

During feeding time, the whole shrimp colony will often flock to the food and try to eat as much as possible. It makes for quite an interesting sight! After a water change or after an individual molt, you might see your cherry shrimp ‘dancing.’ Don’t worry, they’re not going crazy. This phenomenon, while not completely understood, is a natural interaction that happens during breeding periods; the male cherry shrimp chase the females all over the aquarium in an attempt to breed.

Part of what makes these shrimp such a popular freshwater beginner’s choice is how easy it is to breed them and care for the juveniles in a hobby tank. Just provide good water conditions, plenty of plants, as well as a varied diet, and females will usually be pregnant most of the time. They will release miniature versions of themselves after around 30-40 days of carrying eggs. These shrimp are also able to breed again after just a few days.

The fry is very small and usually difficult to spot. Their signature red color doesn’t come until the later stages of their life and they like to stay in planted areas and safe spots throughout the tank. Because they are so vulnerable and will be eaten by almost any species of fish, hiding places like Java moss are a good idea if you want to make sure they survive.

When buying shrimp, look for brightly colored specimens that are actively moving around and foraging throughout the tank. If you’re interested in breeding your shrimp be sure to pick up a starter colony of at least 10. You can buy cherry shrimp for your aquarium here!

If you have any more questions about cherry shrimp care or want to share your own experiences with them in your tank, be sure to leave a comment below. Happy aquarium keeping! 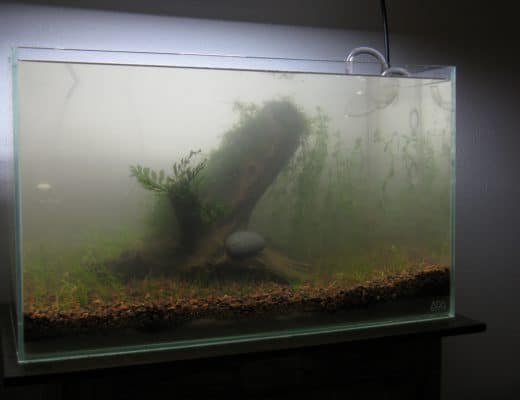 Top 10 mistakes when setting up a fish tank 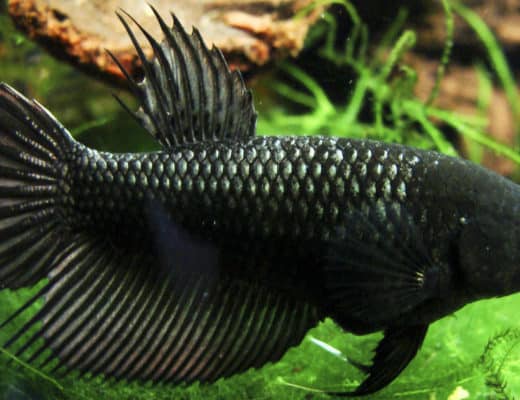 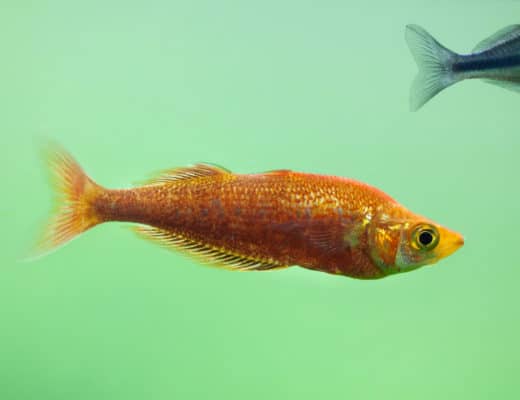