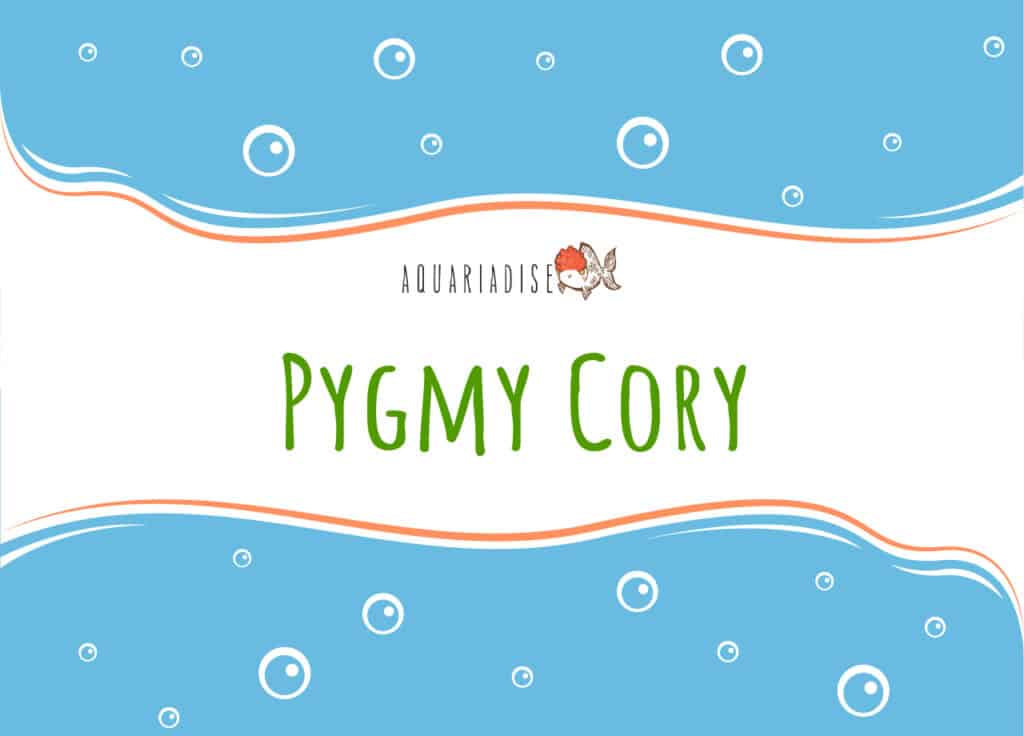 If you’re in search of a schooling fish with adorable looks that are also peaceful, fun to watch, and can live in fairly small aquariums, look no further! Corydoras pygmaeus, C. hastatus, and C. habrosus, better known collectively as pygmy Corydoras, tick all these boxes. These small fish make a perfect choice for any community tank!

When it comes to scientific names, the pygmy cory is only Corydoras pygmaeus. However, in the aquarium trade, ‘pygmy cory’ may wrongly include Corydoras hastatus and Corydoras habrosus as well. As we’ll discuss later, these other species have their own common names.

The pygmy cory originates from the freshwater tributaries and flooded areas of South America. Specifically, they mainly come from the Rio Madeira basin in Brazil. The water in these tropical areas can be pretty varied when it comes to temperature, flow, and turbidity (cloudiness of water). You’ll mainly find these small fish in large groups with other types of cory and bottom-dwelling fish hiding among plants and fallen branches near the bank of the river.

The real pygmy cory looks just like most other Corydoras catfish, with the exception that they don’t grow bigger than 1 inch (2.5 cm). They are often mislabeled as C. hastatus or C. habrosus in fish stores, but it is no surprise that these small fish are often confused with each other as they look so similar and are all about the same size.

You may also hear ‘dwarf Corydoras‘ being used interchangeably with ‘pygmy cory’; in actuality, this specifically refers only to C. hastatus. Even aquarium stores might not always take the time to tell the species apart, so it is good to do some research so that you know what you’re looking for before going out and buying one for your tank.

So how do you tell the three types of ‘pygmy cory’ apart? Here is what you should look for when picking out your fish:

This small fish features an unbroken black line that runs the entire length of the side of its body. Above this black line will usually be a darker grey while the bottom portion is typically a white/cream color.

The difference between female and male pygmy Corydoras is usually not too hard to tell. Females look rounder, especially when viewed from above. They are also usually a bit bigger overall than their male counterparts.

These fish grow to about 1.5 inches (3.8 cm) and have a more elongated appearance than other Corydoras. Their whole body is a light silver with olive hues and may have a distinguishable light horizontal stripe that runs along the side; however, this line does not break up the silver coloring in any way. Most notably, these fish have a black spot on their tail surrounded by a white crescent outline, hence their second common name.

Females also tend to be larger, broader, and rounder when viewed from above when compared to males.

The salt and pepper cory also grows to about 1.5 inches (3.8 cm) and looks similar to C. pygmaeus with a black line that runs the length of its body with darker grey on the top and whiter underbelly. The main difference is that this line is broken and fragmented. Another big give away is that this fish has lots of black spots on its back, as well as on its dorsal and tail fin.

Again, females tend to be larger and rounder than males.

Pygmy cories are one of the only Corydoras species that can be kept in small aquariums. A minimum tank size of 10 gallons (38 L) is usually recommended, with a longer tank being better than a taller one since they are so active.

Like all Corydoras species, these fish should always be kept in larger groups of at least 8; in the wild, it is typical for them to be together in the hundreds or thousands. If the shoal is not large enough, the fish will often become skittish and stressed and won’t be front and center in the tank. Providing plenty of hiding places in the form of aquarium plants and shrimp flats can help make them feel more at ease.

It’s very important to use a sandy substrate in your tank for these fish instead of gravel. If cories are kept on gravel for too long their barbels will wear down, leaving them unable to properly search for food and maintain their health. In especially bad cases, this can even lead to rot, which can be very dangerous since it is so close to the face of the fish. Cories that are kept on the sand are also just much more fun to watch! You’ll see your fish burying their faces up to their eyes into the sand when they’re foraging!

When choosing tankmates for your pygmy cories, keep in mind that they are very small and peaceful fish. They are definitely not a species that will do well in the presence of large and aggressive fish. Good tankmates include shrimp, dwarf cichlids, and small tetras, such as neons.

Contrary to popular belief, none of the members of Corydoras are strictly algae eaters and can’t thrive on just plant-based foods. In fact, they’re omnivores that also need plenty of meaty foods in their diet.

Pygmy cories can be fed frozen foods (bloodworms, mosquito larvae, brine shrimp), catfish pellets, flake foods, and the occasional algae pellet. Make sure the food is small enough to fit into their tiny mouth, though, or they won’t be able to eat it!

Catfish wafers come in handy here because they disintegrate, so your fish can choose when it’s the tastiest size!

Since these fish are omnivores, there is always a chance that they will try to eat anything meaty in your tank; this could include small shrimp as well. But remember, these fish are small! So anything that they would try to eat has to be smaller than their mouth. If you’re really wanting to keep small invertebrates in your tank, make sure they are an appropriate size to prevent them from becoming a quick snack.

If you really want to try your hand at raising fry or shrimp in your tank, it would also be safe to assume that these cories will eat any eggs that become available.

Pygmy cories show very interesting behavior and are fun to watch in a tank setting when they’re provided with a large enough shoal and plenty of hiding places. They shoal very well, only leaving the group to occasionally dart to the surface to gulp some air.

Hanging out at the surface and gulping is a worrying sign in most fish species but actually completely normal in this case. Fascinatingly, cory catfish can breathe air! They use their intestines to take up oxygen, which in the wild comes in handy if water quality isn’t ideal. Do keep an eye on your water values if your pygmy cories seem to be at the surface more than usual, though. This could be a sign that there is too little oxygen in the water or those water parameters (ammonia, nitrite, nitrate) are too high.

Contrary to most Corydoras, this species doesn’t spend all of its time foraging on the bottom of the tank. They spend a lot more time in the middle water layer, which is something to be kept in mind when stocking your aquarium. After all, two species in one water layer can make for a messy looking tank and cause territorial issues.

Theyare also known as the more shy species of the three dwarf cories. C. habrosus and C. hastatus mostly stick to the bottom and can be a bit more outgoing than their cousin.

Watch how all of these fish move together and search for food in unison (and definitely not just sticking to the bottom of the tank)!

Breeding is not considered very difficult, although raising the fry can be a bit challenging due to their size. Spawning can be triggered by doing water changes with slightly cooler water. When the female is ready, the eggs will be deposited on the glass on the side of the tank. The parents should then be removed, as they will try to eat the eggs. It’s also possible to remove the eggs and raise them elsewhere by gently swiping them from the glass with your finger and transferring them.

Some eggs will likely start to develop fungus after a few days. Remove these as quickly as possible so the fungus doesn’t spread! Interestingly, it is mentioned on Seriously Fish that dwarf shrimp will spot and eat any eggs with fungus quite quickly while leaving the healthy ones alone.

Once the fry hatch, they should be fed with very tiny foods like infusoria and/or crushed flakes until they are big enough to accept bigger meals.

I kept a group of C. pygmaeus for a while myself and they were fantastic little fish. While they were indeed quite shy, once the plants in the tank grew and provided some cover, I frequently saw them digging around the planted aquarium substrate and darting around.

They’re definitely a fish I would recommend and keep again myself.

If you want to share your own experiences with pygmy cories or if you have any additional questions about keeping them, leave a comment below. Happy cory keeping!