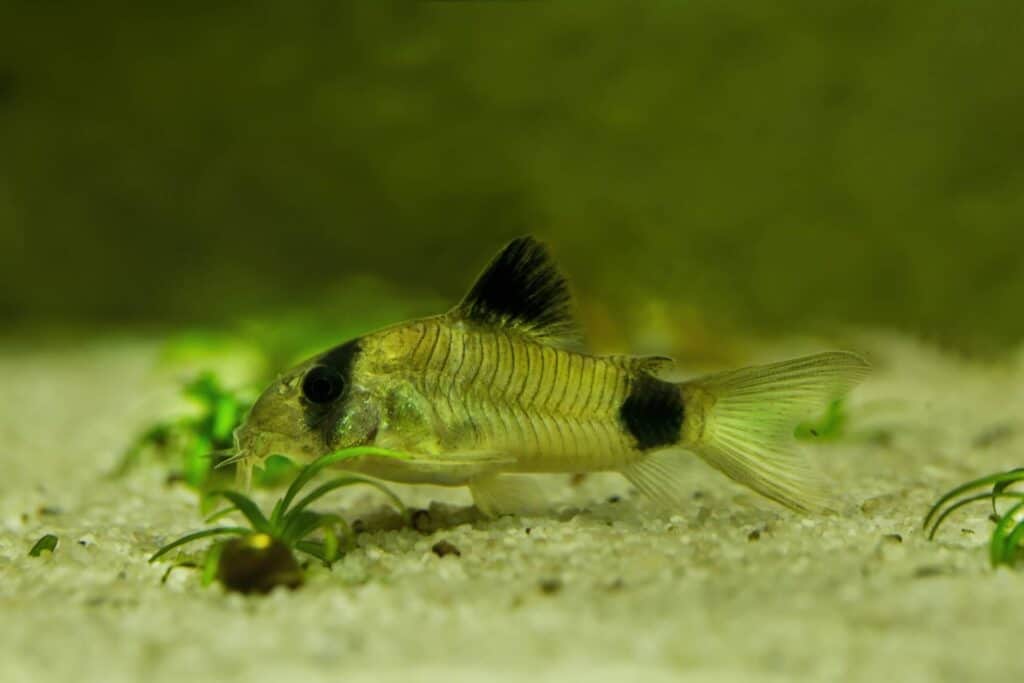 Is your aquarium lacking some personality? The small and playful panda cory might be just what you’re looking for. This active bottom-dweller is sure to brighten up any fish tank; undemanding and peaceful, even beginners will be able to keep this species!

Keep reading for everything you need to know about panda corys and keeping this armored catfish in your own aquarium.

Corydoras panda is commonly known as the panda cory or the panda catfish. These fish come from the genus Corydoras which is collectively referred to as the armored catfish.

Panda corys are native to South America, primarily in Peru and Ecuador where water conditions are influenced by the Andes mountain range. When the snow caps melt on the mountain peaks, water flow increases and water temperature decreases, dropping to about 66°F (19°C). They can be found in both clear and blackwater environments, often with lots of leaf litter and a soft sandy bottom.

Panda catfish are a schooling fish, often grouping together with many other corys and similar bottom-dwelling fish.

The panda cory is a small armored catfish species with a maximum size of about 2 inches (5 cm). They have an off-white to pale-pink base color with black patches over the eyes, dorsal fin, and peduncle. It’s because of the dark patches over their eyes that this species received its name, in honor of the giant panda of China.

There are a few Corydoras species out there that are visually very similar to the panda cory. Corydoras metae (also known as the bandit cory), for example, is very difficult to distinguish from its panda cousin at first glance; the clearest giveaway is its more elongated ‘eye patch’ and black stripe that runs from its dorsal fin to just before its tail. C. melini appears to have the same stripe as C. metae, but if you look closely, there is a space of base color between the stripe and the top of the fish; in other words, a true bandit cory stripe will be directly on the back of the fish and not more to the side like with C. metae.

The image below shows a mix of similar-looking corys. It can get quite confusing, so make sure you know which species you’re actually buying!

Panda cory catfish are energetic fish that thrive in a large setup with softer water. They are a schooling fish, so aim for no less than six individuals since they are more social and less shy in larger numbers. More is always better and a large swarm of corys zooming around the bottom of your aquarium is quite a sight to see.

Since they are active and speedy and always on the lookout for food, it’s highly recommended to go for a minimum aquarium size of 20 gallons (76 L) with a longer tank being preferable. In fact, you’d do best with 30+ gallons (114 L). While they do benefit from planted tanks with lots of shade and hiding places, just be sure to have enough open space along the bottom for the fish to zip along and sift for food.

Since they are commonly found in blackwater conditions and love browsing around the bottom of the aquarium for food, trying to recreate a similar environment at home is highly recommended. You can use lots of leaf litter (like almond leaves and alder cones) as well as driftwood to darken the water and lower the pH. There’s also the added benefit that the fish will have infusoria to snack on as the leaves decompose.

What temperature is right for your panda?

It’s important to remember that these fish thrive in lower average water temperature–in the lower 70s (<25 °C)–so they may not be ideal for a tropical tank. If they are kept in warmer temperatures on a long term basis, their lifespan may be reduced.

C. panda is a peaceful species of fish; in fact, they play so well with their neighbors that they’re actually on the list of most peaceful community fish. As such, they combine best with other peaceful species, like neon tetras, hatchet fish, and the other species mentioned in the article.

Since they are so boisterous, panda corys may intimidate smaller, slower, and shyer fish. Keep this in mind while stocking: tankmates should be peaceful but not timid. These guys have no problems with plowing into other fish as they zip along from one side of the aquarium to the other. Other Corydoras species, like the ones mentioned here, actually make great options as their behaviors are so similar.

Larger, aggressive fish or fin-nippers should be avoided in an aquarium that also contains C. panda. Due to their smaller size, they can still be easily harassed. If you’re looking for a sturdy fish that works well with more assertive species, consider going for the bronze cory instead or a different bottom-dweller entirely!

These catfish are not picky eaters. They easily thrive on a variety of foods, from sinking pellets and wafers to all kinds of frozen foods. Although they should not be purchased just as a ‘cleanup crew,’ they do help by consuming leftovers that your top- and mid-dwelling fish might have missed.

While their diet tends to be primarily vegetable-based, they like a good meal of various types of bloodworms, brine shrimp, and daphnia as well. Buying live food at the aquarium store is a risk since parasites are a real possibility, but luckily this doesn’t limit your options too much. Breeding your own live fish foods is quite easy and this section on fish foods contains guides on culturing multiple ‘yummy’ bug species. Additionally, you can also go for the easy option and hatch some brine shrimp eggs for a much-appreciated snack.

These fish also make a dent in algae, but not all types. If you intend to keep them primarily as algae eaters, they’re not the right fish for you and there are much better options available.

Panda corys are a highly energetic fish that rarely stays in one place for too long. At times, they seem to move faster than the speed of light as they tear around the aquarium, usually in trios or as a large shoal. The species is most active at night, but you’ll still get to see them be their adorable selves during the day as well.

If your goal is to breed panda corys, one of the first things you should know is that they don’t typically reach sexual majority until around five years of age. Since they are highly social creatures, it’s best to get a group of juveniles and play the long game, waiting for them to reach sexual maturity before attempting to spawn. It’s also best to have a ratio of two males per female to increase the odds of successful spawning.

To condition the fish, a rich diet of live foods is recommended. Once the females are ripe with eggs, you can trigger the spawning process by doing a large water change with cooler water and increasing oxygenation levels.

After spawning, the sticky eggs will be placed on plants, driftwood, or glass. However, panda Cory adults are known to potentially eat their own eggs, so it’s best to initiate spawning in a smaller aquarium where you can remove the breeders after spawning. You can also opt to remove the eggs from a tank and raise them separately.

After four days, the eggs will hatch. The fry is extremely sensitive to changes in water parameters, so it’s crucial that everything remains consistent. It’s also recommended to maintain the cooler water temperature, always remaining under 72°F (22°C). Having plenty of leaf litter will provide infusoria for the fry to eat in the beginning stages until they are large enough to accept commercial foods.

C. panda makes a great addition to any aquarium. With their simple dash of color and playful personality, these fish bring excitement and movement to the lower water column. Their schooling instinct makes them fun to watch as they interact with each other and with the other peaceful fish in your tank! Just keep in mind that they naturally come from colder water than what most tropical fish are used to.

If you have any more questions about keeping these panda corys or if you want to share your experiences with them in your own tank, be sure to leave a comment below. Happy fishkeeping!