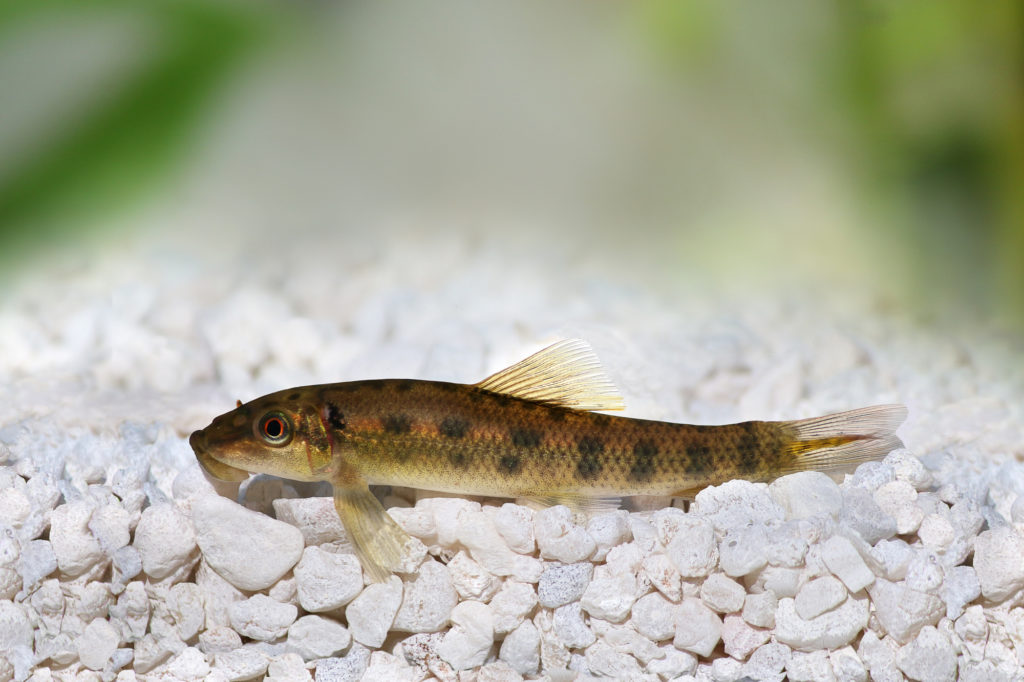 One of the most commonly recommended aquarium species of algae eater is the Chinese algae eater. These fish are very popular among beginners due to their algae eater reputation and appealing behavior as they dart around the tank. However, these fish need special consideration as they only tend to eat algae when they’re juveniles and can only be kept with specific tank mates due to their semi-aggressive temperament.

Keep reading to find out everything you need to know about Chine algae eater care and keeping these fish in your own freshwater aquarium!

Note: Never treat an algae problem with a fish or invertebrate if you can’t house it in your tank indefinitely. Always tackle problems with filtration and water parameters first.

Still, G. aymonieri doesn’t entirely fit into the Gyrinocheilus either; these fish lack pharyngeal teeth and have modified opercles (the bony structures that help support the gills), which does not fit in with the rest of the genus. Since their discovery, they have been categorized as Psilorhynchus aymonieri, Gyrinocheilus kaznakovi, and Gyrinocheilus monchadskii.

Gyrinocheilus aymonieri was named after the French linguist and explorer, Étienne François Aymonier (1844–1929).

Chinese algae eater fish are native to Thailand, Vietnam, Cambodia, and Laos. More specifically, they can be found in the Mekong basin, Chao Phraya basin, Mae Klong basin, and the Xe Bang Fai River. Interestingly, they are only ever rarely found in China despite their common name.

There, these fish can be found in flowing rivers and streams and lead pretty solitary lives. The water is usually very clear and shallow, allowing an abundance of sunlight to enter the system and feed biofilm that covers the surface of plants, rocks, and driftwood. The substrate is usually a mix of fine sand, smooth pebbles, and larger boulders.

It is believed that the Chinese algae eater migrates with the seasons to deeper and more turbulent areas of water.

Chinese algae eaters have been documented in sustainable populations as far east as Puerto Rico; it is believed that aquarium releases have led to these unnatural wild occurrences of these fish.

While not the most attractive aquarium fish to own, the Chinese algae eater definitely has the personality to make up for where it lacks in appearance. These fish are plain brown with a cream-colored underbelly and have a dark mid-lateral line that runs all the way from their suckermouth to the base of their tail fin. Interestingly, this species lacks barbels which are usually apparent on most other bottom feeders. Males and females cannot be externally identified most of the time.

Because their appearance can be a little underwhelming, they are sometimes confused with other similar species, including Garra cambodgiensis, Epalzeorhynchos kalopterus, some species of Crossocheilus. Here are some ways you can tell them apart from a true Chinese algae eater:

Cambodian logsucker (Garra cambodgiensis). Also known as the false Siamese algae eater, these fish come from the same areas within Thailand, Cambodia, Vietnam, and Laos, but prefer faster and more oxygenated waters. These fish are nearly identical to Chinese algae eaters but have a thicker and more uniform mid-lateral line that often has a parallel yellow line right above it. Cambodian logsuckers can grow to 6 inches (15 cm) long.

Flying fox (Epalzeorhynchos kalopterus). A little easier to differentiate, the flying fox also comes from Thailand but is also found in Sumatra, Java, and Borneo. Though they will eat algae, these fish are not the best algae controllers for a tank. They can grow up to about 5 inches (12.7 cm) long.

Crossocheilus sp. Members of Crossocheilus are some of the best freshwater algae eaters available in the aquarium trade. There are currently 17 recognized species within Crossocheilus. They originate from parts of India, China, Indonesia, Thailand, and Malaysia.

Other variations. There are also albino, golden, and short-bodied variations of these fish, though they are less common to come across in the aquarium trade. Because of their popularity, albino and golden varieties of this species have been subjected to artificial dyeing. This is a painful process and ultimately results in a shortened lifespan for the fish.

How big do Chinese algae eaters get?

Chinese algae eaters can grow up to 11 inches (28 cm) long but tend to grow much shorter in the aquarium setting. More than likely, your fish will reach a maximum length of about 5 inches (12.7 cm).

Chinese algae eaters can also easily surpass 10 years of age, even living to 15 years. However, this is unlikely even under perfect water conditions. However, keep in mind that your fish could potentially be with you for a long time!

While sold as good beginner fish, Chinese algae eaters actually require a lot of special attention and consideration. They are a very active bottom-dwelling species, so just one will need a minimum tank size of 30 gallons (113.6 L); these fish can be pretty territorial and have the potential to reach 11 inches so in order to keep two, at least 60 gallons (227.1 L) should be allowed.

As we’ll discuss later, these fish can be pretty aggressive and like to set up territories within the tank. Plenty of caves made out of driftwood and rocks should be provided for the fish to retreat to and feel safe. Substrate should be smooth to avoid injuring the underbelly of the fish, with sand and rounded gravel being the best options. Plants and additional surfaces will cultivate biofilm for your fish to constantly feed on; however, there is a chance that your fish will also eventually eat those plants.

Water temperature should remain stable between 72-80° F (22.2-26.7° C) with pH between 6.0-8.0. Water flow should also be moderate to help recreate their natural environments. Otherwise, they will require regular water changes and general aquarium maintenance.

While the Chinese algae eater is usually listed as a community-friendly species, these fish actually need a lot of planning and consideration when picking potential tank mates. More experienced hobbyists even tend to avoid this species entirely, as the whole tank will need to be planned around them; another popular option is to keep these fish in a species-only setup, but this requires a very large tank size.

However, this does not mean that other fish cannot go with your Chinese algae eater. As we’ll discuss, their territorial and aggressive behaviors make them more compatible with slightly more aggressive fish. Tank mates should have a similar temperament to that of the Chinese algae eater. Good options might be tiger barbs, swordtails, emperor tetras, and mollies.

Fish should be active enough and able to swim away if the Chinese algae eater tries to latch on; species with a flat body, like cichlids, also tend to be picked on more. Invertebrates should be avoided as this species will almost definitely eat small shrimp and snails.

So what makes the Chinese algae eater such a problematic fish? Despite their small size and algae eater reputation, these fish have been known to kill other larger and more aggressive fish. These fish love to latch onto the sides of other fish, sucking away at their slime coat which helps protect them from harmful particles and microorganisms in the water column. This leads to the other fish becoming stressed out and highly susceptible to disease and infections, leaving the Chinese algae eater to be the last one standing in the fish tank most times.

When they are young, Chinese algae eaters mainly stick to eating algae. However, as they grow larger, they become more territorial and start to prefer meatier foods. They become especially aggressive towards similar-looking species and other bottom feeders. This species should always be added last to the tank to make sure that the fish does not claim the whole space as its own.

Aggression may be decreased by adding more Chinese algae eaters, but this would require a very large aquarium.

Yes, they can and they will. They are very persistent at latching onto other fish, stressing them out and causing disease and infection.

While known as fish that eat algae, Chinese algae eaters seem to eat a lot more than just algae. While they will get a steady source of food from the biofilm that naturally grows in tanks, they will also need an assortment of live and frozen meaty foods as well as blanched vegetables. Brine shrimp, bloodworms, and insect larvae will all be readily accepted as well as shelled peas, lettuce, and cucumber.

Breeding Chinese algae eaters has not yet been successfully documented in the aquarium trade, possibly due to their high territorial demands or specific water parameters when spawning.

The Chinese algae eater is a popular fish for many beginner hobbyists. While they’re sold as algae eaters, they can also turn into a massive problem for poorly selected tank mates. They don’t require any special water parameters, but they do need to be kept in a large enough tank with compatible species or left by themselves.

If you’ve picked up one of these freshwater fish from your local pet store without knowing their true care, try to return it or make sure that the tank is set up with them specifically in mind. For more ideas about different types of algae eaters, make sure to check out our list of the top 5 aquarium algae eaters here!

If you have any questions about Chinese algae eater care or have had experience with this species before, don’t hesitate to leave a comment below!