What Do Crabs Eat? Algae, Protein, And More 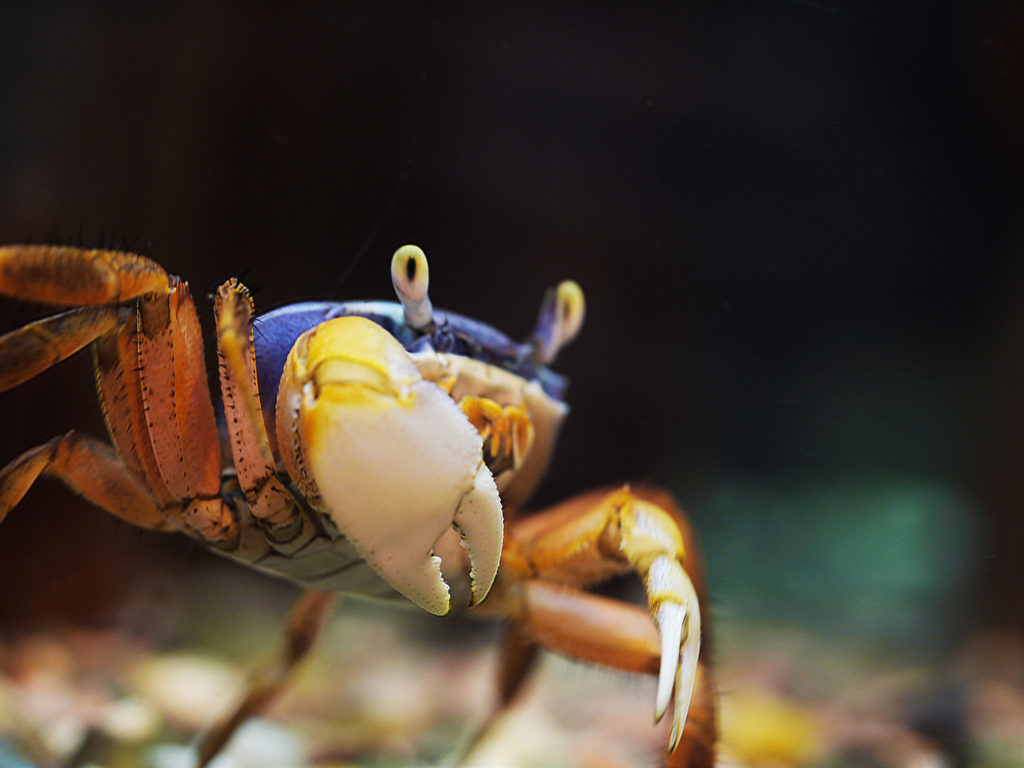 If you’re wondering whether crabs make excellent pets, you’ll need to know how to care for them, including how to feed them.

Several species of freshwater crabs can be kept as pets, but in this guide, we focus on the hermit crab. So, what do Hermit crabs eat? In this article, we explain how to feed your crab, but first, let’s find out more about these cute and fascinating creatures.

What is a crab?

Hermit crabs are members of the Paguroidea family of crustaceans, which contains over 800 species. Within that super-family are seven distinct groups of Hermit crabs. Those in the Coenobitidae group are land-dwellers, whereas the remaining six species live in seawater.

Both land-dwelling and marine crabs use their gills for breathing. Marine species exchange oxygen and carbon dioxide via the water column, but species that are primarily land-based breathe air and will drown if they are unable to get to the surface.

Hermit crabs have soft, curved bodies that have no natural shell to protect them from predation. So, the crabs have evolved to fit into empty mollusk shells, moving out when they outgrow their home to find a new, larger shell. These enigmatic animals can survive for up to 30 years in the wild, although their captive lifespan is generally much shorter than that.

Although Hermit crabs are very popular as pets, they are not generally available in pet stores. That said, you can usually find some nice specimens online where they can be purchased. Prices vary wildly, depending on the size of the individual crab and species to which it belongs. However, you can expect to pay anything from a few dollars right up to $60 or more.

Land-dwelling species of crabs live along tropical coastlines, inhabiting areas near the sea or freshwater sources so that the creatures can keep their gills moist, which they need to do to breathe. Land-based crabs also spawn in shallow saltwater.

In contrast, marine species of crabs spend their whole lives living in the tropical ocean on reef systems close to the shore, extracting food that is carried over the reefs in the current and with the tidal cycles.

Crabs are mostly peaceful creatures that enjoy the company of others of their kind. In fact, wild crabs generally congregate in large groups. Larger species tend to be more aggressive than smaller ones, and some types may regard small fish as a food source. For that reason, you should either keep a species-only crab tank or stick to keeping small, reef-compatible species.

Like every living creature, crabs grow as they age, meaning that they periodically outgrow their shells. Consequently, you’ll often see Hermit crabs fighting over shells, a behavior that’s known as “rapping.” That’s completely normal behavior that can be avoided by providing the crabs with lots of choice in the form of different shapes and sizes of empty shells. Throughout their lives, crabs shed their exoskeletons as they grow. That happens more frequently when the crabs are younger, and the growth rate slows with age.

Crabs are pretty good climbers, although they will spend much of their time on the substrate, foraging for scraps of food, or exploring among the rocks in the lower areas of the tank.

Each species of crab is quite different in appearance, although most Hermit crabs have long, soft abdomens that are curved, allowing the crab to anchor itself inside an empty mollusk shell. Hermit crabs of the order Decapoda have ten appendages, including their claws.

That’s where the similarity in appearance between the creatures ends. Hermit crabs come in many different colors, which can become brighter or duller, depending on where they are in their lifecycle. The smallest species of crab (the Ecuadorian Hermit crab) reaches only half an inch long, whereas the largest (the Coconut crab) can grow to exceed a whopping 40 inches! You would certainly need a substantial tank if you wanted to keep one of those monster critters!

Every crab species requires slightly different tank conditions, and you must research the species that you plan on buying very carefully before you go ahead and make your purchase. However, no matter what species you choose, you should try to replicate the species’ natural environment as closely as possible.

An efficient filtration system is essential, keeping the water clean and ensuring a good flow throughout the aquarium. You should also include plenty of seaweeds to help remove nitrates and carbon dioxide from the water, replacing it with dissolved oxygen that the crabs need for respiration.

When aquascaping your tank, be sure to include lots of live rock and a sandy substrate to make the tank feel as natural as possible. The more at home your pet feels, the less likely he is to succumb to the harmful effects of stress.

As a general rule of thumb, you should choose a tank that allows roughly one gallon of water per inch of crab.

In the wild, crabs live with many different creatures, including other invertebrates and fish species. So, if you have a reef setup, you can include species such as gobies, Butterflyfish, Damselfish, and Clownfish. Other popular fish species that do well with Hermit crabs are Royal Gramma, small wrasses, and Firefish.

Invertebrates, including cleaner shrimp, also get along fine with crabs, and they provide a useful service by cleaning algae from the rocks. Small species of crabs can also be safely kept together.

Species to avoid are predatory fish such as Groupers, and beaked species should also be avoided, including Pufferfish, Parrotfish, and Triggerfish, as they will quickly make a meal of a crab. Also, Hermit crabs will pursue and kill snails, initially to eat the snail, and secondly to steal its shell, so you can’t include any mollusks in your setup.

What do crabs eat?

Hermit crabs are omnivores, enjoying a diet of algae and protein. Interestingly, food that is high in carotene will make the crabs’ colors brighter, especially if the species is naturally red or orange in color.

Crabs are scavengers, eating pretty much everything and anything they can find in the wild environment. In the sea, crabs eat green and red algae, decaying matter, and carrion such as dead shrimp and fish. Hermit crabs will attack sea snails, firstly to eat the snail itself, and secondly to steal the snail’s shell.

You’ll also see your crabs sifting through the sandy substrate looking for morsels to eat, vacuuming up uneaten food, and decaying detritus. It’s very important that you feed your captive crab a balanced, nutritious diet. Crabs eat a wide range of foods. Offer your pets a staple diet of sinking vitamin-enriched pellets that are specifically formulated for marine crustaceans. If you have fish in your tank that could snatch food from the water before it sinks to the bottom, be vigilant at feeding times to make sure that your crabs get enough to eat.

Crabs like to eat small quantities of food to suit their natural scavenging habit, so feed them twice each day, ideally in the morning and early in the evening. As mentioned previously, crabs will graze on algae, so if you don’t have lots of algae growing in your aquarium, provide your pets with lots of spirulina algae wafers and dried seaweed as a supplement. You can add variety to the crabs’ diet by offering them fresh tuna and sardines once in a while as a meaty treat.

Some people like to freeze fresh fish as food for Hermit crabs. That’s a good idea since crabs eat dead fish in the wild environment if they can find it. Before you feed your crab, be sure to thaw frozen foods first.

Shell rot is a very common condition that affects many species of marine and freshwater crabs. The disease is caused by bacteria, which attack the crab’s exoskeleton, breaking down the chitin and creating holes, which can lead to more severe secondary infections.

Shell rot is usually directly associated with feeding your crab contaminated seafood, including shelled mussels and oysters, as well as poor conditions within the tank. If you feed your crab shelled seafood, always boil it first to kill off any bacteria and fungi.

All crustaceans molt, shedding their exoskeleton in order to grow. The old exoskeleton falls away to allow the crab to grow larger. Healthy adult crabs molt roughly every 18 months, whereas juvenile specimens shed their exoskeletons roughly once a month.

Right before molting, the crab may lose much of its bright coloration and appear duller, which can cause new owners to panic until they realize that the color change is natural and doesn’t indicate a health problem in their pet.

Once the exoskeleton has been shed, you must leave it in the tank. Crabs and shrimp both eat their exoskeleton, as it is a valuable source of calcium that’s required for strengthening their new exoskeleton. When you notice that your crab has molted, you must supplement its diet with calcium-enriched food to keep your pet strong and healthy.

Keeping Hermit crabs can be a fun hobby that is very rewarding when it’s successful.

There are many different species of crabs to choose from, some of which live on land and some that are exclusively marine. Before taking home a crab as a pet, be sure to research the species thoroughly, as each has specific care requirements, and if you get it wrong, your crab will be stressed, which leads to disease.

One good thing about keeping Hermit crabs is that there are many small species to choose from that can live happily in a small tank of up to 20 gallons unless you want to include fish too. So, if you keep a species-specific tank, you don’t need a huge setup.

So, a crab can make a great pet. But be sure to do your research first before you buy one.