Flying Fox Fish: How To Care For These Freshwater Species 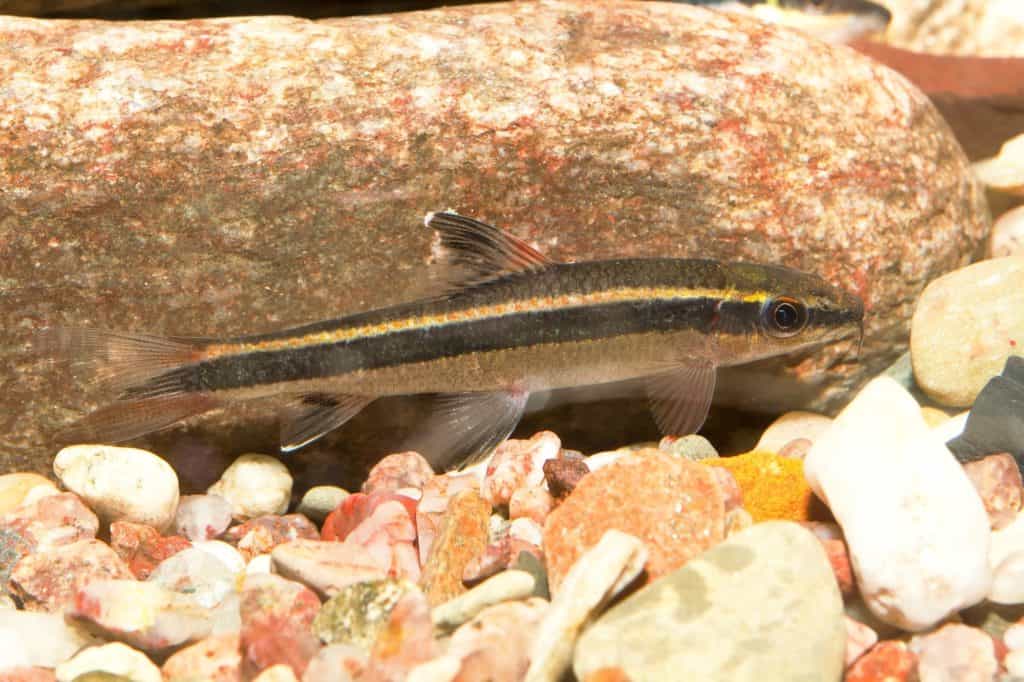 The Flying Fox fish is a popular, readily available fish that is often seen in freshwater, tropical aquariums. Often, these fish are introduced to eat algae, although they are omnivorous.

But would these fish make a good addition to an existing community tank, and should you consider buying some? In this guide, we give you the information you’ll need to make the right decision.

What is a Flying Fox fish?

The Flying Fox, scientific name, Epalzeorhynchos kalopterus, is a freshwater fish of the Cyprinidae family.

Both sexes look identical as juveniles, although adult females in breeding condition are noticeably thicker-bodied than males.

Flying Foxes grow to reach up to 6 inches in length in an aquarium setting and can live for up to eight years.

Most of the fish that you find for sale in fish stores are commercially bred rather than wild-caught, although it’s not thought that the species is endangered in the wild.

The Flying Fox lives in rivers and streams, moving into forested areas and floodplains during the wet season. Unfortunately, human development and urbanization have caused problems for migratory fish, perhaps causing the decline of some local populations.

Wild fish graze on algae and biofilm that grows on the rocky, sandy substrates of the fish’s natural habitat and are also known to eat tiny crustaceans, insects, and insect larvae.

What is NOT a Flying Fox fish?

There are two other varieties of this species that have similar characteristics, although they are not the same fish. Sometimes, fish stores label their stock incorrectly, so it’s important that you are aware of the differences so that you can make an informed purchase.

The Siamese Algae Eater is often mistaken for the Flying Fox because the two species look very alike.

The only way that you can tell which species is which is by looking for flaps in the corners of the fish’s mouth. Flying foxes have the flaps, whereas Algae Eaters do not. However, these are small, very active fish, making it extremely difficult to tell the difference between the species by looking for such tiny details.

Fortunately, you can also make an educated guess by checking out the fish’s color. The Flying Fox’s black stripe is smooth and finishes where the tail fin starts. The Algae Eater also has a black stripe, but it is less smooth and extends to the end of the tail fin.

The False Flying Fox eats green algae but not the red species. These fish are aggressive and highly territorial, except during the mating season, making them unsuitable for many community aquarium setups. False Flying Foxes do not have the black stripe of the other two species, making them easy to distinguish.

Care of the Flying Fox fish

Flying Fox fish are pretty straightforward to care for and do well in an aquarium setting, as long as the water conditions are suitable, and the diet that the fish receive is balanced and appropriate. That’s one reason why you should make sure that you have the correct species, as dietary requirements can vary.

Although Flying Foxes are relatively small, they do require plenty of swimming space. So, an aquarium of 100 gallons capacity is preferred.

These fish need a water temperature of between 680 and 78.80 Fahrenheit. Water pH should be between 6 and 7.5, and a water hardness range of 5 and 120 GH is preferred.

Like other species that inhabit environments where the water is free-flowing, Flying Foxes are not tolerant of an accumulation of organic waste and will do best in water that is well-oxygenated and has a fairly strong flow. Weekly partial water changes of around 25% should be carried out, and the tank should be equipped with an efficient filtration system.

The tank should be aquascaped to replicate a flowing river with a sandy, gravelly substrate that contains a few large, water-worn rocks and pebbles, driftwood, and driftwood roots. The tank should be well-planted with fresh plants and should be brightly lit so as to encourage a modest growth of algae on which the fish can graze.

Flying Foxes eat algae and plant matter, although they are omnivorous and will take insect larvae, small crustaceans, as well as white and tubifex worms too.

For the fish to develop its best colors, you should provide additional nutrition in the form of high-quality algae wafers, flakes, freeze-dried bloodworms, and frozen foods, including artemia and daphnia. Also, zucchini, shelled peas, lettuce, spinach, and cucumber will be well received.

In the aquarium, the fish will often move to the midwater range to browse on the biofilm that forms on solid surfaces and rocks.

Flying Fox fish can make peaceful community members in a mixed species tank that has plenty of swimming space. However, you should not keep these fish with others of their kind. All mature Foxes are territorial and can be extremely aggressive, sometimes fighting to the death.

Also, it’s best to avoid bottom-dwelling species, as these can be bullied by the Foxes.

At the time of writing, there are no recorded cases of hobbyists breeding Flying Fox fish in a home aquarium setting.

In this part of our guide, we give you the answers to some of the questions that are most frequently asked by those thinking of adding Epalzeorhynchos kalopterus to their collection.

A: Although Flying Fox fish are aggressive and territorial, they do not eat other fish or large species of shrimp.

A: Yes. All species of Flying Fox fish can be aggressive, especially toward their own kind. For that reason, you should not include multiple Foxes in your tank. Also, you should be wary of including shy, vulnerable species in your community tank, as they may be bullied by the Foxes.

Q: Is a Siamese Algae Eater the same as a flying fox?

A: Siamese Algae Eaters can be aggressive and territorial when kept with their own species. However, when kept singly in a community tank, the fish are generally peaceful.

One Flying Fox fish can make an attractive addition to a community tank, although the species is not suitable to be kept in a shoal.

Flying Foxes are omnivorous and will eat algae, but you must also offer them other vegetable matter, flakes, freeze-dried, and frozen food that includes some meat content. If properly cared for, the Flying Fox fish can live for up to eight years.

When buying one of these fish, do check that it is a Flying Fox fish you’re buying. This species is often confused with several similar-looking fish and can be mislabeled in fish stores.