How Do Fish Mate: Mating Age, Seasons, And More 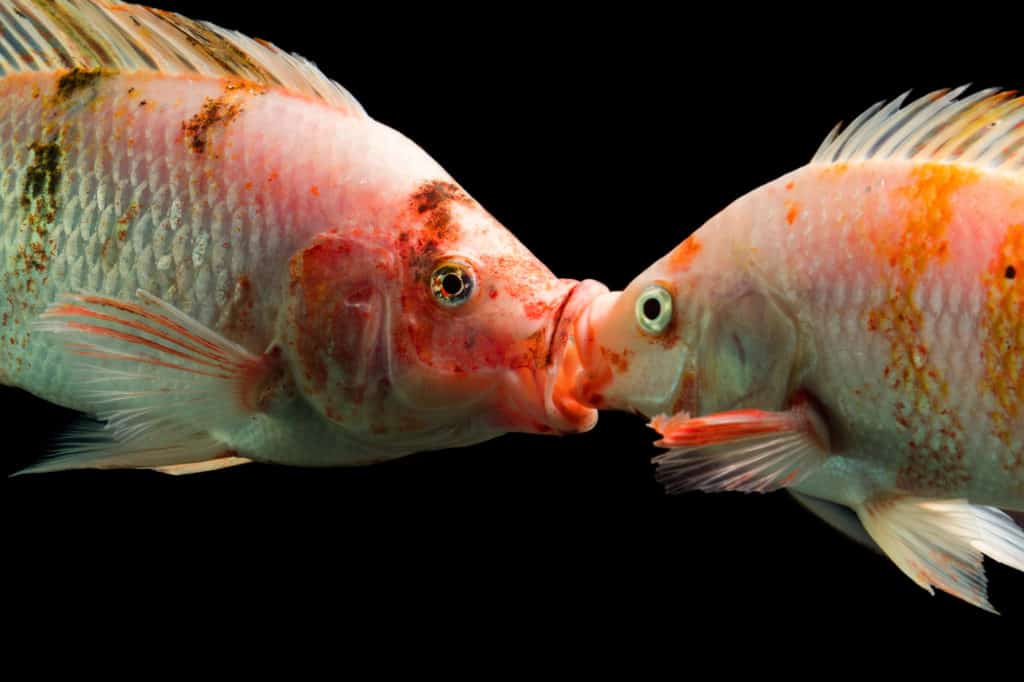 If you’re a keen hobbyist, you may have considered breeding from your stock. Many fishkeepers, especially betta enthusiasts, enjoy studying the genetics of a particular species and trying to create new and exciting variations of the fish.

In this guide, we take a look at how to fish mate and reproduce. You may be surprised by what you learn!

Before we look at the different ways in which fish mate, it’s important to understand the fish’s reproductive anatomy.

Like most vertebrates, it’s necessary for an egg and sperm to combine for fish to create new life. Although there are several ways in which that can happen, the common denominator is the fish’s reproductive organs: the testes and ovaries.

There are three primary classifications of reproductive methods that apply to fish:

Like insects, reptiles, and birds, in oviparous fish, the fry embryo develops within the egg. However, that process takes place outside of the parent fish’s body.

An estimated 90 percent of fish are classified as oviparous reproducers. The female fish lay eggs, which are then fertilized by the male. Most females lay many eggs at one spawning, and the number of eggs is referred to as the “fecundity.”

The fish’s fecundity is very much dependent on the size of the fish. For example, the Silver Arowana may lay between 50 and 250 eggs per season, whereas the huge Ocean Sunfish releases anywhere up to 300 million! Fertilization takes place in two main ways.

Oviparous fish fall into one of several categories:

In mouthbrooders, the female fish lay their eggs into the water where they are fertilized by the male. The eggs are then collected by one of the parents and held in the fish’s mouth until they hatch. Interestingly, it’s often the male fish that carries out brooding duties, although, in some species, both the male and female fish play an equal role in raising the family.

In some species, as the fry grow, although they are free-swimming, they seek refuge in the parent fish’s mouth until they are large enough to fend for themselves.

Some species of fish build a nest to keep their eggs safe and protected from predators until they hatch. In general, the nest is built by the male. The female inspects the male’s handiwork, and then, if she’s satisfied, she deposits her eggs in the nest, where they are fertilized by the male.

Nests are sometimes made from bubbles, as with bettas. A nest can also be made from leaves, or it may be just a simple scrape in the substrate. Again, the male fish will fertilize the eggs by spraying his sperm over them.

Egg scatterers lay their eggs either in open water or somewhere undercover where the eggs adhere to surfaces. The male fish swims through the carpet of eggs, depositing semen as he does so.

The female lays her eggs in one spot, and the male fish then swims over the eggs and fertilizes them.

Egg buriers hide their eggs in the substrate. The male fish then dives down into the substrate and fertilizes the eggs.

Both these categories of fish are more commonly called livebearers.

In ovoviviparous fish, the young develop inside the mother’s body, although she does not provide them with any nutrition. Instead, the youngsters use their egg’s yolk sac to feed on as they develop.

In viviparous fish, such as swordtails and guppies, the eggs are fertilized inside their mother’s body where they develop. However, the growing embryos receive nourishment from their mother via a placenta-like structure that attaches the embryo to the mother fish.

In both cases, when development is complete, the mother gives birth to fully-formed live fry. In most fish, this process takes between two to four weeks. Examples of livebearing species include guppies and platys.

Once the female has mated and produced fry, she doesn’t always need to mate again to give birth. Some fish have been known to reproduce regularly without a male even being present.

If you want to try breeding fish in your aquarium, livebearers are often the easiest place to start.

Hermaphrodites are fish that carry both female and male reproductive parts within their bodies and are able to produce both sperm and eggs simultaneously.

These synchronous hermaphrodites are able to cross-fertilize to reproduce without any interaction with another fish of the opposite sex. Mangrove killifish is a good example of true hermaphrodites.

When a female hermaphroditic fish changes gender to become a male, the process is called “protogyny,” whereas the transformation of a male fish into a female, is known as “protandry.”

Sequential hermaphrodites still need a fish of the opposite gender to reproduce.

So, what causes the switch in gender?

Well, sometimes, the change in gender orientation is caused by the prevailing conditions. For example, where a group of hermaphroditic fishes is deprived of the opposite sex, one of the groups may switch gender. A great example of that is the Clownfish.

A school of Clownfish often includes one male and one female as a mated pair. The remainder of the shoal will be made up of small males. If the female leaves the group or dies, the male will change gender to become female, and the next largest male fish in the school will become the new female’s replacement partner.

How do fish mate?

Now that you understand more about the physical process of fish breeding, we’ll talk some more about some other aspects of fish reproduction and answer some of the most commonly asked questions about fish mating behavior.

At what age can fish mate?

In fish, the reproductive organs are usually the slowest part of the creature to develop. That’s because the sex organs are not essential for the fish’s survival at, and immediately after, birth.

Different fish species reach sexual maturity at different ages. That typically depends on the size and age of the fish and on the individual species. As a general rule of thumb, the smaller the adult fish, the sooner they will be mature enough to mate. So, some species can mate within weeks of hatching from the egg, whereas others take many years to become sexually mature enough to breed.

What are mating seasons?

When fish mate depends on the species.

Some fish are able to reproduce many times throughout a year regardless of the season, for example, Guppies, Mollies, Clownfish, Swordtails, and Platys.

Other fish are only able to reproduce during a particular season of the year when the water temperature is right or when there is ample food available to bring the fish into breeding condition.

Some fish only reproduce once and die shortly after they have spawned, for example, the Pacific salmon.

Creating the perfect spawning conditions in your tank

Most wild species mate in spring when the water becomes warmer and the daylight hours are longer. So, you can stimulate your fish to spawn by replicating those conditions in your home aquarium.

Begin by carrying out frequent water changes, raising the tank temperature slightly, and slowly extending the length of time that the lights are on. Female fish need plenty of high-protein food to bring them into breeding condition, so be sure to adjust your fish’s diet accordingly.

It’s a good idea to relocate your breeding pair to a separate spawning tank so that they won’t be stressed by the attentions of their tankmates. Also, when the fry is born, you may need to remove the parents so that they don’t eat the babies, which can happen with many fish species.

You will need to mimic the natural environment of the variety of fish that you’ve chosen to breed. Carry out research so that you know what kind of planting, breeding surfaces, and substrate are preferred by your fish, and try to copy that in your breeding tank.

How to choose a breeding pair

When choosing a pair of fish that you intend to breed from, be sure to choose the pair that has the brightest color and appears lively and in good overall condition. Most fish are able to breed once they grow large enough and reach maturity. So, pick a pair of fish that are of a reasonable size. Remember that in many species, female fish are smaller and less brightly-colored than males.

If you’re unsure how to sex the fish, ask the fish store expert to help you.

It’s useful to know that many tropical fish farms stimulate their fish to breed in the springtime, usually in indoor tanks. The fry is placed into outdoor ponds until they grow large enough to be shipped to fish stores. These youngsters have been conditioned by being fed a good diet, including live foods and pellets. By the fall, the fry is mature and ready to breed, and you may find a perfect pair in your local fish store.

Whether you choose egg layers or livebearers, you will need to feed the fry, and that can be the trickiest part of breeding fish.

The fry of egg layers feeds on the egg yolk sac for a few days after they hatch. After that, you will need to feed them. Most fish breeders use infusoria as a first food for their fry. Infusoria are tiny micro-organisms that live in the water, including crustaceans, algae, bacteria, and protozoa.

You can grow infusoria, simply by putting a lettuce leaf in the breeding tank, as soon as the male and female fish start spawning. The leaf will quickly decompose, creating enough infusoria for the fry’s first week or so. At that time, you can remove the old lettuce leaf and replace it with a fresh one. After another week, you can begin to feed the fry with one of the finely powdered fry foods for sale in your local fish store. Commercial paste preparations are also available, including Liquifry.

Just when you thought we’d told you everything that you need to know about the different ways in which fish mate, here are a few fascinating facts that you can use to astound your friends!

So, you can see that the question, “How do fish mate” has many answers!

There are many variations of breeding in fishes. But in a nutshell, in some species, the male fish inseminates the female fish who then grows the fry inside her body, other fish lay eggs, which are then fertilized by the male outside of the female’s body, and there are a few hermaphrodites self-fertilize, without the need for mating at all.

If you want to try breeding fish, there are plenty of aquarium species that are pretty straightforward to breed. We suggest that you begin with livebearers, such as guppies that seem to spend much of their time reproducing! As you become more experienced, you may want to try rearing other, more challenging species.

The mating and courtship rituals of many species are fascinating to watch, especially if the parents take an active role in rearing their young, such as Kribensis. However, before embarking on your new project, you must take the time to research the preferred tank conditions that are required by the fish species you want to breed.