How Aquarium Water Hardness Is Affecting Your Fish 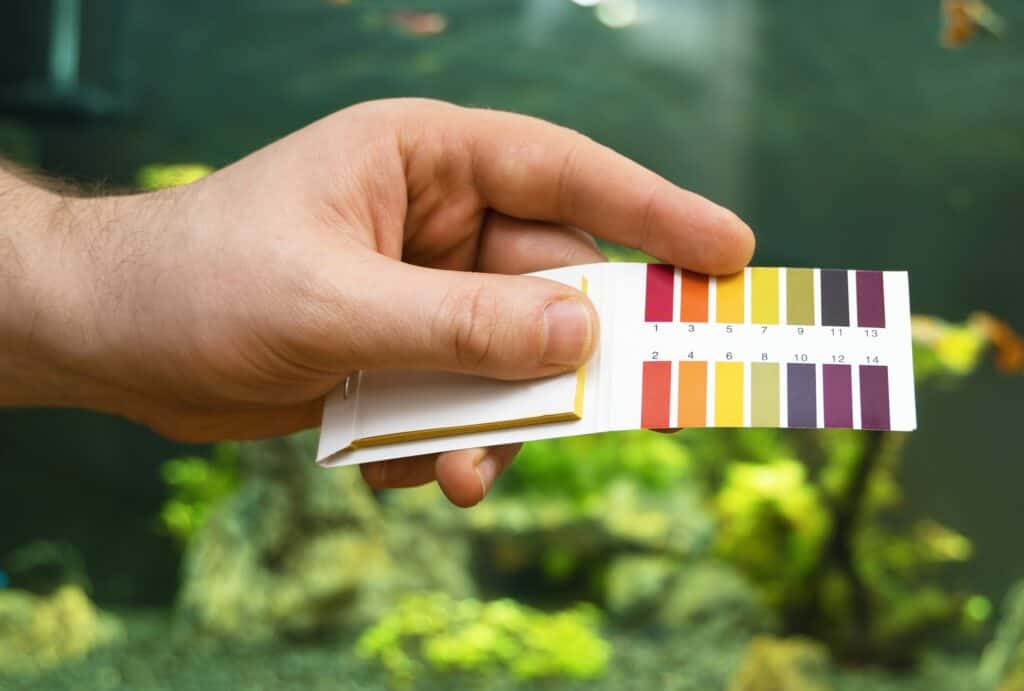 Water hardness is an important water parameter for healthy saltwater and freshwater fish tanks, but most hobbyists don’t test for it and don’t even know it exists! Knowing the water hardness in your aquarium and understanding what it affects and how it’s affected will give you more control and insight over your entire ecosystem.

Keep reading to find out what water hardness is, how it affects your tank, and how to test and control it in your own freshwater aquarium!

What is water hardness?

In terms of aquarium terminology, general hardness measures the number of minerals in the water, namely calcium and magnesium ions. These are important minerals for many fish and invertebrates in the aquarium as they help build bone and exoskeleton, regulate metabolism, and facilitate ion exchange. If fish are kept outside of their optimal hardness range, then they may not grow as big or not live as long.

In general, hardness varies by geographical location; local reservoirs of freshwater can be influenced by geological composition, runoff, seasonal weather patterns, and other external factors. Because of these exterior factors, tap water is usually moderately hard to hard and needs to be softened for certain freshwater aquarium fish.

How do you measure water hardness in your aquarium?

General hardness is usually abbreviated as GH and measured in degrees; it is common to see it notated as dGH or °GH. General hardness may also be documented in parts per million (ppm), with 1 °GH equaling 17.848 ppm. There are many commercial aquarium test kits that will accurately measure general hardness as well as carbonate hardness.

Carbonate hardness (KH; also referred to as alkalinity) measures the carbonates and bicarbonates in the water, which is usually recorded as dKH or °KH.

Like any water parameter, if total hardness is out of the ideal range meant for your fish, then you will most likely have problems in your aquarium. It is important to understand the natural water conditions that fish thrive in order to allow their metabolism and physiological processes to work as they should without having to expend too much energy.

Very soft water (0-3 °GH/0-50 ppm). At the extreme end of the general hardness range, very soft water can be difficult to raise. It is not likely that you will find many freshwater aquarium fish that prefer this range, if at all. One notable species that fits in this range is the clown killifish/banded panchax (Epiplatys annulatus).

Soft water (3-6 °GH/50-100 ppm). Most aquarium fish in this category will be from South America, where the water is naturally filled with tannins from decaying plants and other detritus. Some popular fish include tetras, angelfish, Corydoras, and South American cichlids.

Moderately hard water (6-12 °GH/100-200 ppm). This range of general hardness is preferred by most species of tropical fish. This includes most livebearers, like mollies and platies, and is the optimal range for betta fish.

However, by this point, you will want to start considering lowering the general hardness or keeping African fish species that can handle the higher degrees, like congo tetras (Phenacogrammus interruptus) and African cichlids; odessa barbs (Pethia padamya), flagfish (Jordanella floridae), and some species of rainbowfish (Melanotaeniidae family) have also been known to appreciate hard water.

Very hard water (18+ °GH/300+ ppm). This range is sometimes referred to as the liquid rock zone in the aquarium hobby due to how many minerals are present in the water.

While most fish are able to adapt to higher or lower degrees of hardness, it is always best to match the species of fish to the parameters of the tank. Most African cichlids will thrive in very hard water conditions as well, along with some cichlids from Central America.

It is important to note that these ranges are general estimations and different hobbyists might have broader or closer ranges for each category.

What fish do well in hard water?

Most freshwater livebearers are able to adapt to hard water. However, once the water is considered very hard, your stocking is mostly limited to African cichlids that are endemic to one specific lake of the world.

This is because these lakes, like Lake Malawi and Lake Victoria, have rocky bottoms that keep the hardness high; some Central American cichlids also do better in hard water as opposed to soft water aquariums.

It should also be noted that most live aquatic plants are able to withstand a large range of general hardness; however, some hobbyists have found that certain types of algae grow better in aquariums with more extreme ranges, leaving aquatic plants to be outcompeted.

How do you increase water hardness in your aquarium?

While there are ‘ideal’ parameters that make for perfect water chemistry, most tanks run outside of those ranges. In general, it is better to have stable levels than to constantly make changes in attempts to reach those values; this can quickly throw your tank out of balance and cause your animals to stress out.

This same principle relates to manipulating the total water hardness in your aquarium; even more so, you need to keep in mind that you will also inadvertently change calcium and magnesium levels, pH levels, and carbonate hardness.

However, if your tap water is softer water, or you want to keep freshwater fish that need a little more specific water chemistry, then you will need to know how to raise the mineral content in your aquarium.

Adding crushed coral to an area of high water flow, like the aquarium filter, is a popular method for raising both the general hardness and carbonate hardness. However, it can be tricky to figure out the exact amount needed to get your tank to the desired levels.

Similarly, limestone may be added to the main aquarium display or to the filter to help raise both KH and GH. Both crushed coral and limestone release minerals into the water over time which helps increase the concentrations; this also causes pH to rise respectively. The rate at which the crushed coral and limestone dissolves in your tank is largely based on how acidic the water quality is.

Some hobbyists use Epsom salt to help raise total hardness in their aquarium as it contains magnesium, however, it does not contain calcium and those levels would need to be raised otherwise. We do not recommend using Epsom salt as it can be difficult to dose and can have lasting effects on fish and invertebrates.

If you are unable to use crushed coral or limestone, it may be best to go with aquarium-safe calcium/magnesium products that are specifically designed to raise general hardness. Follow the directions provided and perform a water test regularly to safely track general hardness, carbonate hardness, and pH.

If you are struggling with maintaining these levels in your tank due to the source water being used, it might be best to switch over to distilled or reverse osmosis water to have more control over these variables.

General hardness can definitely be a confusing aspect of aquarium water quality, but it is essential for maintaining a stable and safe environment for your fish. Different fish need different levels of total hardness depending on where they originate from in the world.

These levels will need to be matched in your fish tank by adjusting as needed; regular general hardness, carbonate hardness, and pH testing will need to be done to see how these parameters influence each other.

Always remember that while ideal freshwater aquarium parameters exist, it is almost always better to have a stable tank with unideal numbers than to chase after them and upset your whole fish tank system.

If you have any questions about general hardness, carbonate hardness (alkalinity), or have had experience dealing with a fluctuating aquarium pH, don’t hesitate to leave a comment below!

6 thoughts on “How Aquarium Water Hardness Is Affecting Your Fish”