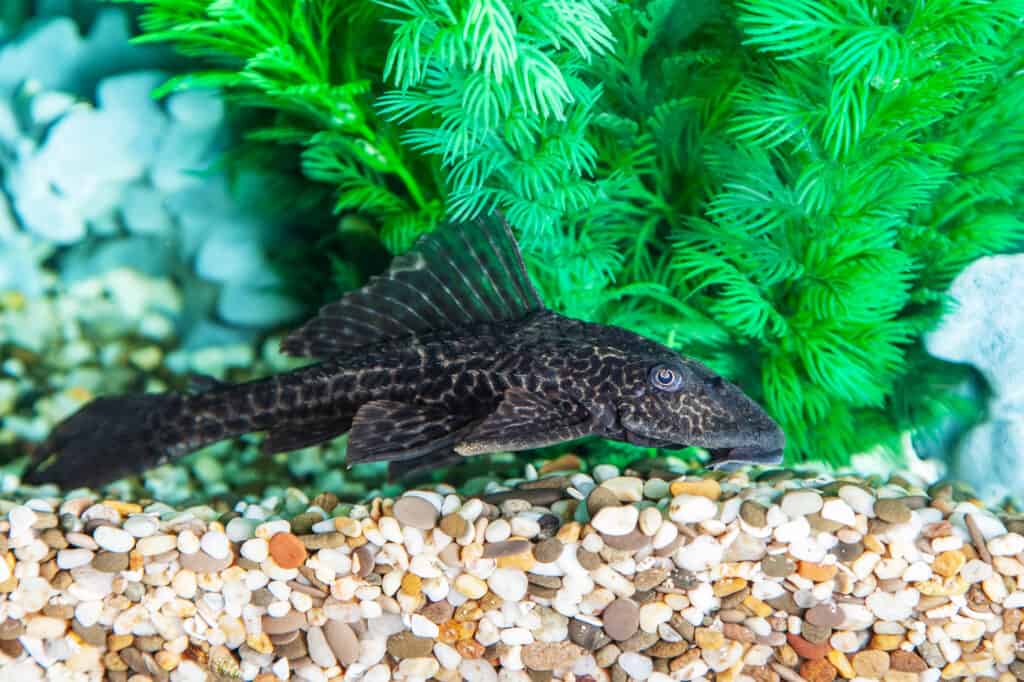 There are many different types of catfish available in the aquarium trade, some of which work well in the home community aquarium and some of which definitely don’t.

There’s a catfish for all tank sizes and community types, so keep reading for a list of 8 catfish ranging from small to medium sized and from calm to absolutely hyperactive!

Probably the most well-known and popular type of aquarium catfish is the genus Corydoras, collectively known as Cory catfish or Cories. There are many different Corydoras species, ranging from the tiny pygmy Cory which is suitable for tanks of 40cm/15.5″ and up to larger species like the bronze Cory, which needs 35.5″/90cm or more.

All Corydoras are schooling fish and should be kept in groups of at least five (preferably much more) to prevent stress and shyness. They are bottom feeders that love to sift around the bottom of their tank using their sensitive barbels. This means a sand substrate or small rounded gravel is recommended if you want to see them show their natural foraging behavior and prevent barbel damage. Soft, relatively acidic water is preferred. When it comes to tankmates try to choose peaceful species that prefer similar water values. This list contains some options.

And last but not least… don’t forget to have a look at the full article about Corydoras catfish including general info and a list of five fascinating members of the Corydoras genus here.

To the surprise of many non-fishkeepers and beginners in the hobby, the upside-down catfish (pictured at the top of this article) does exactly what its name suggests. It swims upside-down!

One of the smaller and more peaceful members of its genus, the upside down-catfish is suitable for aquariums of at least 31.5″/80cm and does well in most moderately peaceful communities. This catfish is a popular choice for Central-/West-African biotope setups, so small cichlids from similar areas (like Kribensis cichlids) could make suitable tankmates.

Keep groups of at least 4 upside-down catfish and be sure to provide plenty of hiding places to prevent stress. Tall plants like Amazon sword should work well for this. Feed a combination of frozen, live and pellet foods.

When it comes to odd looks, twig catfish from the Farlowella genus definitely take the cake. This species has taken camouflage to the next level by evolving to resemble a branch or twig. Definitely quite effective: in an aquarium with plenty of leaf litter you might not see a Farlowella until it moves.

Aquarists appreciate Farlowellas not just for their fascinating looks, but also for their peaceful behavior and big appetite for algae. In fact, the species is on the list of best algae eaters and the list of perfect peaceful community fish!

If you’d like to keep a Farlowella in your own aquarium, remember that these catfish don’t respond well to bad water quality. They grow to an adult size of around 6″ or 15cm, which means you’ll need an aquarium of at least around 35.5″ or 90cm to house a single specimen.

To keep your Farlowella happy and healthy, consider cultivating some algae in a separate tank. Additionally, feed plenty of other greens to prevent the fish from going hungry. Algae tabs make a good staple and you can use greens like zucchini or kale for some extra variation.

An all-time algae-eating favorite and actually on the list of best algae eaters, Otocinclus catfish are one of the tinier catfish species available in the aquarium trade and can be kept in tanks of 15.5″/40cm and up. Their small size doesn’t make them easy or suitable for beginners, though. They’re actually a bit controversial due to their fragility and high death rate.

If you want to keep Otocinclus in your aquarium make sure it’s fully cycled and, most importantly, stable. Provide plenty of hiding places in the form of plants, rocks and wood and get a group of at least five fish (preferably more). Tankmate-wise, go for only the calmest species. Small schooling fish, shrimp and other peaceful catfish like Corydoras can work well.

You can find a full Otocinclus caresheet containing everything you need to know about this tiny catfish here.

Glass catfish are another strange looking catfish species. They are translucent aside from a little bit of pigmentation on the head, which means the inner organs are visible. Naturally found in blackwater habitats in Thailand they prefer a heavily planted setup with stained water, which can be achieved by adding Indian almond leaves.

Keep glass catfish in schools of at least five in an aquarium of at least around 40″/100cm, because although they are one of the smaller members of their genus they can still grow to a size of around 2.5 inch (~6.5cm). Due to their relatively inactive and peaceful nature, it’s not a good idea to combine them with very active or aggressive tankmates.

The genus Ancistrus, with Ancistrus cf. cirrhosus and dolichopterus probably being the most popular, is collectively known as bristlenose or bushynose catfish. The common name is derived from the bushy facial growths mature males display.

All Ancistrus are mainly herbivores and can be fed a diet of algae pellets and blanched vegetables like zucchini. They will also happily munch on protein-based fish foods. They are a great addition to peaceful community aquariums of at least around 31.5″/80cm, although tank size obviously depends on the size of the particular Ancistrus variety you end up going for. Be sure to add plenty of hiding places.

Ancistrus are cave breeders and, if provided with the right type of environment and spawning sites, should breed easily. A fun project!

Their extremely active nature, larger size (reaching up to 6 inches/~15cm), predatory tendencies and shoaling nature make pictus catfish unsuitable for just any regular community aquarium. However, this is no reason not to consider them. They are a real eyecatcher and a joy to watch.

Although pictus catfish are sometimes considered a solitary species, they are best kept in groups of at least five if you want them to feel at ease. For a group this size, an aquarium of at least 51″/130cm is a good place to start. Go for tough, fast tankmates: anything that fits into the pictus’ mouth will inevitably end up in there. The Ancistrus catfish discussed above could be suitable, as are larger schooling fish.

As can be seen in the video below, pictus catfish have a voracious appetite. A diet consisting of sinking wafers and plenty of frozen and live foods should work well.

Hara jerdoni, also known as Asian stone catfish, are a tiny catfish species that is also found on the list of nano fish for small tanks. Due to their size and low activity level an aquarium as small as 13.5″/35cm can be enough to sustain these fish. They are slow eaters and easily outcompeted by faster tankmates, which means a very low-activity community is probably the best choice. In small tanks, try sticking to just some (dwarf) shrimp as tankmates.

Hara jerdoni is not a very popular species in the aquarium hobby as of now so definitive info about them is still scarce, but a group of at least 3-4 fish seems preferable. Feed a high-protein diet consisting of frozen and possibly small live foods.

South American bumblebee catfish can be kept in groups and combined with most community fish that appreciate similar water values, though be careful with smaller tankmates. Despite their peaceful nature these are still catfish that will gladly eat anything they can catch. A setup with plenty of hiding places is preferred, as this species loves to hide by wedging itself into any crevice it can find. Go for coconut hides, rocks and plants that don’t mind a relatively dimly lit environment, like Java fern.

Although the list of worst beginner fish only features one catfish, some of the species for sale in aquarium stores are actually absolutely unsuitable for beginners and sometimes won’t work in most home aquariums altogether.

Shovelnose catfish (up to 40 inches/1 metre), red-tailed catfish (easily over 50 inches/120cm), common Plecostomus catfish (over 20 inches/50 cm) and other large and in most cases very aggressive catfish species are obviously best avoided unless you’re willing to go for the largest aquariums or even 1,000+ gallon ponds. These are sold as small juveniles that seem perfectly suitable for normal setups in the beginning, so research any and all fish before you buy!

If you have any more questions about the catfish on this list or want to share your own experiences, don’t hesitate to leave a comment below!