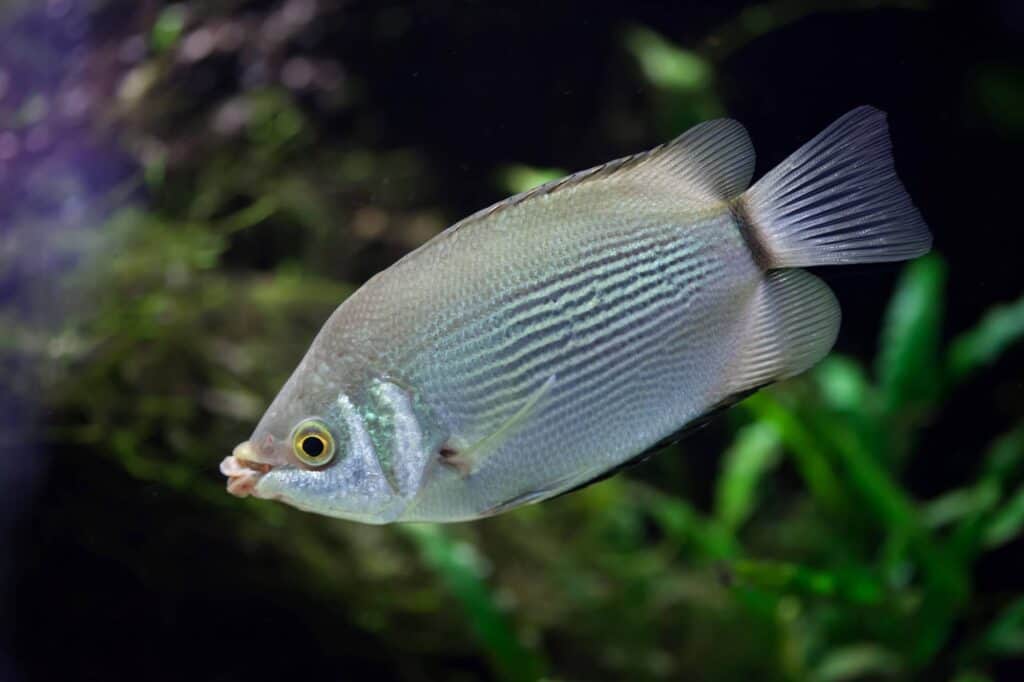 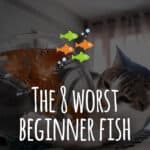 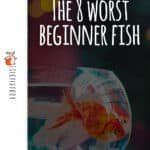 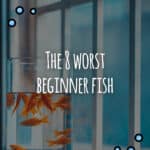 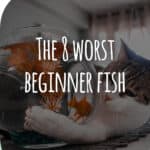 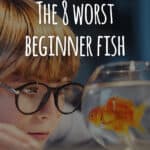 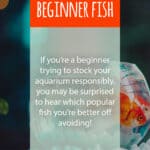 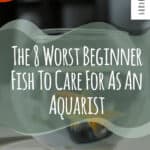 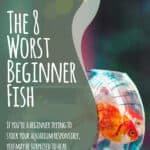 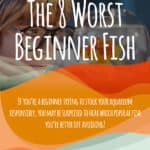 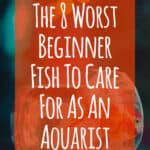 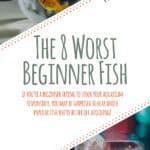 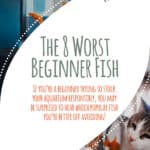 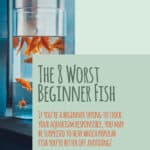 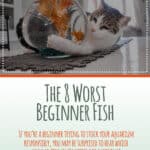 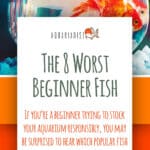 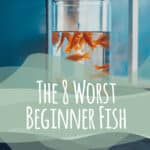 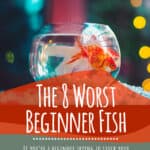 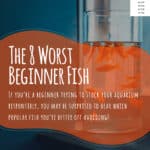 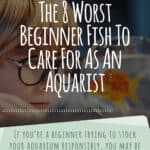 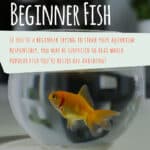 A lot of the most popular fish available in pet- and aquarium stores are surprisingly bad choices for beginners, and some of the least noticed species are actually very easy to care for. This can get very confusing, especially with most stores not being too helpful.

This is why I compiled a list of some the best and worst beginner fish for all the aquarists out there who are confused by all the contradicting info out there. If you’re a beginner trying to stock your aquarium responsibly, you may be surprised to hear which popular fish you’re better off avoiding!

If you’re a beginner, be sure to have a look at the list of best beginner fish as well!

These gourami (pictured above) are popular aquarium fish due to their funny ‘kissing’ behavior. They are a very easy impulse buy and I imagine many are sold every Valentine’s day! What most starstruck lovers don’t realize, though, is that those adorable little fish with their kissy mouths can actually grow to up to 11 inch (25cm).

Maybe not such a good idea for that small tank after all, but unfortunately most people don’t realize this until their kissy fish has already passed away.

The adorable kissing behavior seen in these gourami is actually how they fight, not a display of affection. The fish meet mouths and push each other around the tank to determine which one is stronger. Unfortunately, kissing gourami will also try to defend their territory from other fish species and can literally bully their tankmates to death by attacking and chasing them all day long.

Aquarium plants won’t be treated any better, because kissing gourami are omnivorous and love to nibble at any plants they can find. Kissing gourami are best kept in a large tank: at least 85 gallons (300L) would be a good idea. If you want to keep them with other fish, don’t go for calm, small or defenseless species.

Angelfish can be a gorgeous centerpiece in a tropical aquarium. Few things are more beautiful than a group of these elegant fish swimming alongside one another, foraging and showing their natural behaviour.

Sadly, angelfish are often kept in conditions that prevent them from growing to their true potential and that can even cause growth deformities. Most importantly, don’t keep just one of these fish.

Try to get at least six of them so they can form breeding pairs and feel safe together – for 6 angelfish, an aquarium of at least 80 gallons (300l) is a good place to start. Because of the height they can reach, angelfish are best kept in an aquarium that’s at least 20 inch (50cm) high. This will prevent deformities and gives them space to swim and grow.

If you really want to imitate their natural habitat, go for a South American biotope with dark water and plenty of Amazon sword plants.

Though not considered extremely difficult to care for, these fish just don’t seem to get what they deserve. Some sites list 30 gallons (115L) as a minimum, but many uninformed fishkeepers choose to house them in even smaller setups. Not a great idea at all, as Oscars can reach a size of 13-14 inch (35cm).

I’d recommend about 120 gallons (450L) for one pair. Don’t go easy on the filtration; you’ll definitely need an canister filter with plenty of room for biological filter material. Don’t house them with smaller fish, because they might just consider those a quick easy meal. Oscar cichlids can be kept by beginners, but starting out with a smaller tank with peaceful fish to gain some experience first may be a better idea.

Everyone had one as a kid: a 40 cent feeder goldfish in a bowl. Mine was named Leon and I loved him, until I realized that the Leon I’d had for three years was actually 20 Leons that my parents kept replacing after they died.
Goldfish are one of the most popular aquarium fish species, but they are pretty hard to properly care for. Neither common goldfish nor fancies can live in a bowl.

Commons are mainly pond fish, and fancies need at least around 20 gallons (75L) per fish to thrive. They can’t be kept alone, so you’re looking at a minimum of 40 gallons (150L). Why? Because they can grow up to the size of your underarm or foot. And goldfish produce a lot of waste, so a big aquarium isn’t enough; you’re also going to need heavy filtration. External canister filters meant for tanks double the size of your goldfish tank are preferable.

Even though they’re great pets with lovely personalities, goldfish don’t make good beginner pets. Don’t try to win one at the fair if you don’t have the pond or tank for it!

Even though a lot of websites try to warn beginning aquarists about these fish, they’re still sold on a huge scale. When given the right care and enough space, clown loaches will show very interesting behaviour, but unfortunately most of them will never get this lucky. Because they’re usually sold when they’re still very small, it’s kind of hard to imagine that these cute little striped creatures can grow to up to 12 inch (30cm!).

Because of their need to live in groups of at least five, they will need an aquarium of at least 75 gallons (285l) with lots of filtration. Keeping the water extremely clean is a must for these guys, as they are very sensitive.

You can find a full clown loach caresheet here.

Another one of those cuties that is sold in your average pet store around the corner, where they accidentally ‘forget’ to tell you they can grow to a size of 12 inch (30cm). They should also be kept in groups, will try to jump out of their tank when they get the chance and are actually endangered in the wild. Definitely not a great fish to start out with as a beginner. However, like clown loaches, this species is very interesting to keep.

If you have a 100+ gallon (400+L) aquarium with a width of at least 79 inch (200cm) lying around and are a more experienced fishkeeper, they are actually a great challenge. Be sure to try to find captive bred Bala sharks though, and remember to think before you buy.

Their intelligence, interesting behaviour and odd looks make puffer fish great pets that can be just as much fun as a cat or dog. There’s one problem though: these fish need very specific care. Their aggressiveness, need for bigger tanks, sensitivity and their specific diets make it very difficult to set up an aquarium for them.

There are many different kinds of freshwater and brackish puffers, but they are all very messy eaters and most species won’t tolerate any tank mates whatsoever, something that has caused many a fish to be brutally slaughtered. Many of people introduce puffer fish into their community aquarium to deal with a snail problem, but after all the snails are eaten, problems start to arise. Before you decide to get any kind of puffer, do your research!

You can find a list of 5 freshwater puffers here.

When it comes to people buying fish and being absolutely shocked when doing research afterwards, these guys probably take the prize. Often sold as ‘great algae eaters that will do fine in small tanks’, Pleco varieties like the Sailfin Pleco and Common Pleco can actually grow to an adult size of about 20 inches (50cm), which means they require an aquarium of at least 150 gallons (~570L).

Obviously not a very good choice for smaller setups after all, and to make matters worse, most varieties aren’t even effective at removing algae nor are they suitable for a planted tank. Plants will be dug up and sometimes eaten.

Although they are very hardy and fairly peaceful, I would definitely not recommend these fish for beginners because of the reasons listed above. Ancistrus varieties (Bristlenose Plecos) make a much better choice for beginning aquarists when it comes to Plecos, as they only grow to about 6 inch (15cm). One Bristlenose can comfortably live in a 40 gallon (150L) aquarium.

Some fish that would normally make fine beginner fish, have been badly bred for so long that inbreeding has made them weak and vulnerable to diseases. Examples of this are Dwarf Gouramis (Trichogaster lalius – formerly Colisa lalia) and Guppies (Poecilia reticulata). Both used to be very hardy and fairly easy to care for, but are now so vulnerable to disease (a study has shown that 22% of all Dwarf Gouramis from Singaporean fish farms carry the Dwarf Gourami iridovirus) that it’s very hard to keep them healthy or even alive.

If you want to keep Dwarf Gouramis or Guppies, I definitely recommend getting them from a reputable breeder. This way you have a better chance of finding healthy fish that won’t die within weeks.

Please remember that surviving does not always mean thriving. If you’ve kept Oscar fish in a 30 gallon tank before and it went well, that’s great. It still doesn’t mean that 30 gallons is an ideal environment, though. Read before you buy!

Keeping your fish healthy and stress-free is much more important than owning as many fish as possible. If the correct setup is too expensive or too much work, choose another species.

If you have any suggestions for species to add to the list or want to share your experiences with these fish, be sure to leave a comment below. Happy fishkeeping!

40 thoughts on “The 8 Worst Beginner Fish”