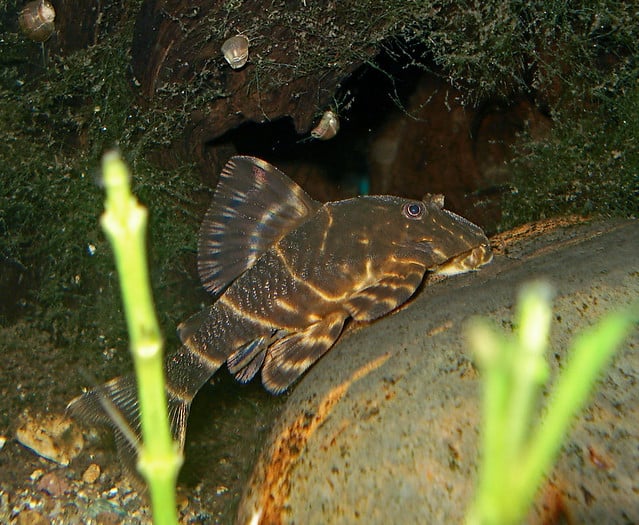 Looking for an interesting bottom dweller for your South American-styled aquarium? With many other species of large pleco out there, the little ones often get forgotten! The striped clown pleco could be the perfect size and dash of color your small aquarium has been needing.

Keep reading for everything you need to know about clown pleco care with a guide to keeping clown plecos in your own aquarium!

Panaqolus maccus is commonly known as the clown panaque, the clown plecostomus, the clown pleco, or the ringlet pleco. In the numbering system used to identify the many species of similar catfish, this species is assigned the name: L104, L162, or LDA022.

Wild clown plecos originate from Venezuela and Colombia, specifically from the Apuré and Caroní River basins. They are typically found near riverbanks among tangles of driftwood and plants. In their natural habitat, their dark colors help them camouflage on the bottom of the water column where there is plenty of food to eat and sustain their wood-based diet. While there is not much information about how long they can live, it is safe to assume they can easily surpass 10 years under the right conditions and with exceptional care.

The clown pleco is a striking and pretty beautiful fish with a dark body and multiple bands of color. The bands range from tan to bright orange naturally, although age, mood, and diet can impact the contrast and vibrancy as well. The color patterns also vary between regions with some clown pleco populations displaying straight bars and others showing a more wavy pattern.

The clown pleco is a dwarf pleco (Loricariid) species, typically only growing to a maximum size of 3.5 to 4 inches (9-10 cm) in length. That being said, there are exceptions to the rule since many clown plecos have been reported to grow larger. Fortunately, these fish as a whole are still much smaller and easier to care for than other common Loricariid such as the “tank-busting” common pleco which is on the list of worst beginner fish.

Despite their small size and easy care, the most common tank size recommendation for keeping clown plecos successfully is 20 gallons (76 liters). This mainly has to do with their natural diet, which largely consists of driftwood. Wood cannot be digested very efficiently, which causes the clown pleco to produce large amounts of waste that can quickly foul a smaller tank to the point of causing water quality issues. This can become a serious problem for the rest of the fish in the tank, so regular testing is recommended!

Even a 20 gallon tank is considered too small by some fish enthusiasts; bigger is always better, so if you can afford a larger tank, then a clown pleco could definitely be right for you. For most dwarf catfish varieties, you should aim for at least a 30 gallon (114 liters) tank. This will give you a lot more options when it comes to recreating a natural habitat with lots of open water for additional community fish. In order to make your clown pleco feel at home in your tank and to provide proper care, you should consider:

Since clown plecos are bottom dwellers, they do well in a standard peaceful community tank, as they tend to live in the spaces that other fish don’t. However, it’s still important to make sure that each clown pleco has enough hides and space just for itself. They may also sometimes be hostile towards other community fish if food or territory is scarce, although this is only really to be expected when resources are limited.

If you’d like to keep a natural habitat and go for tankmates that live in a similar place in the wild, a few species to consider would be Corydoras habrosus, cardinal tetras, and German blue rams.

If you plan to have more than one clown pleco in your tank, you’ll want to provide at least an extra 10 gallons (38 liters) of space since they can become territorial towards their own kind. They may even become territorial towards other small plecos, so it’s generally recommended to only have one of these fish in your aquarium unless you have ample space or plan to breed.

Did you know? Clown plecos can live to be up to 10 years old with proper care! If you’re not prepared to commit yourself to the aquarium hobby for that long, then catfish in general may not be right for your tank.

Like many other types of plecos, clown plecos are often used in an aquarium to eat algae on the glass and rocks. Because clown plecos actually primarily eat the outer layer of decaying driftwood instead, you’ll eventually need to supplement some aquarium safe cholla wood. If you have a beautiful driftwood aquascape that you don’t want to see a clown pleco eat for lunch, you should avoid this fish!

You also have to be careful with what plants you use in your tank. Since clown plecos are used to scraping away wood, if they try to munch algae off sensitive plants with thin leaves, they can cause major damage. To avoid this issue, you should opt for hardier plants with large, thick leaves, such as Amazon swords.

Just like with all animals, the key to keeping these fish healthy is to vary their diet. Clown plecos are omnivores that will readily snack on most food that is given to them. Algae catfish wafers and frozen foods, such as bloodworms, brine shrimp, and daphnia, make good choices. They’ll also eat your typical bottom-dweller blanched vegetables, such as zucchini, cucumber, lettuce, and whole peas. They’re reported to be huge fans of yams!

Note: As has been briefly touched upon earlier, it’s important to keep in mind that the clown pleco produces a lot of solid waste because of its special diet. To keep the water chemistry in your tank in check, be sure to make siphoning the substrate a regular part of your cleaning routine. You’ll also need to have strong filtration to help deal with the excess debris and ammonia.

Clown plecos are shy fish that tend to do their own thing in the background. Even if you have plenty of appropriate hides, you may not see them as often as you’d like; they like to hang out under driftwood and confine themselves to the bottom of the water column. If you want an active centerpiece fish for your thank, this species of pleco may not be for you.

When it comes to finding clown plecos in the hobby, it should be noted that a lot of specimens are wild caught. At the same time, this fish tends to breed and spawn more readily than other dwarf pleco types. With a good diet alone, these fish can be prompted to breed and spawn, although hobbyists have more success when properly conditioning breeding pairs.

In order to condition their clown plecos for breeding, hobbyists have to replicate the dry season and subsequent rainy season in their home aquarium. There are multiple ways of doing this. Everyone has a slightly different method, but the gist of it is that the fish are first fed a high-protein diet for several weeks while gradually raising the water temperature. This is meant to replicate dry season conditions. Then, the rainy season is simulated by doing a large water change with a cooler base temperature and softer water, which triggers the fish to spawn as if in its wild habitat.

Once they are in the mood for some lovin’, the fish seek out and spawn inside of caves, although they prefer doing so in wood caves over rock. The caves should have a narrow opening, only wide enough for the fish to fit through, and be longer than the length of the fish (at least 4 inches).

After the eggs are fertilized, the male will stay in place and guard the eggs and juveniles for up to a month before finally emerging with his new family. Because of this parental behavior, the disappearance of a male is often a sign that a spawn has been successful. It is quite fascinating to see! Breeding your clown plecos is definitely worth a try.