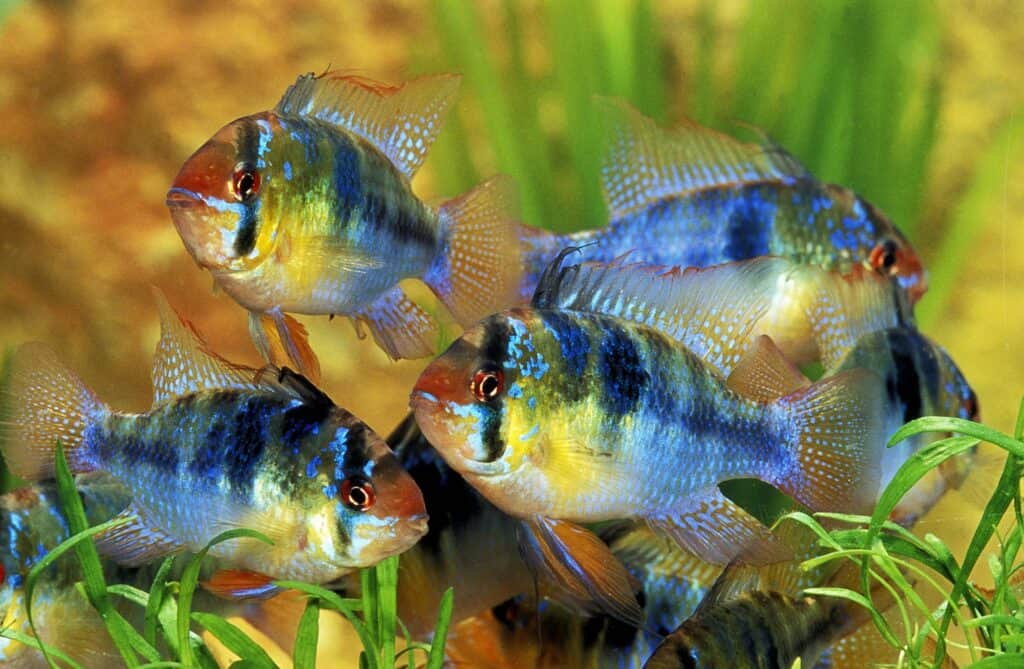 In need of a pop of color for your aquarium? Few types of fish will brighten up your tank like the German blue ram. This dwarf cichlid species is appreciated by aquarists for its bright orange and electric blue colors, as well as its relatively peaceful temperament. Although the German blue ram is not the easiest fish to keep in the aquarium due to its fragility, it does make a fantastic choice for the more experienced fish keeper.

Mikrogeophagus ramirezi is commonly known as the German blue ram, the blue ram cichlid, the butterfly cichlid, and the Asian cichlid. The species was first described in 1948 and named after an aquarium trade importer, Manuel Ramirez. This ram is part of the cichlid family, Cichlidae, among 2,000+ other species of cichlid, but is known is be one of the less aggressive types that remains on the small side.

German blue rams come from the tropical grassland plains of Venezuela and Colombia, east of the Andes mountains. Here, they prefer a temperature range of 78-85 °F (25.5-29 °C) with more acidic water (pH of 5.2-6.7) conditions. These bodies of water are often filled with plants and other vegetation where a small ram would have plenty of hiding places. It is also common to find these fish in areas with low flow, with little amounts of dissolved nutrients, and in stained water from natural tannins.

The German blue ram is a stunning tropical fish that is guaranteed to be a showstopper in any home aquarium. This fish features a vibrant yellow body, orange-gold face, bold black stripes, and blotches, with an iridescent blue shine. It is common for wild-caught German blue ram to have more intense colorings and more visible lines on their body than those bred in a tank setting. Regardless, it’s almost guaranteed that even if you aren’t a fish lover, you’d see this beautiful creature and instantly fall in love!

There are a few ways to tell your male and female blue ram cichlid apart! Male ram cichlids tend to only reach a maximum size of 4 inches (10 cm), with females being even smaller than that. Males also usually keep the first half of their dorsal fin extended, however, due to improper breeding, females may also exhibit this behavior so this method is not the best. The most definite way of telling your rams apart is by looking at the black dot just below the dorsal fin. Females will have a blue sheen to their dot while males will not.

While the last option is the best way to determine your ram cichlid breeding pair, the other methods of using colors and variations heavily depend on the conditions of the tank that they are being housed in, size, and maturity level. So just make sure to really look for that blue sheen below the fin!

Because German blue rams are dwarf cichlids, they don’t require a large tank size to ensure proper care; a 15 gallon (57L) aquarium is recommended for a male and female pair as long as it’s a long tank; if purchasing a tall aquarium, go for a larger size as they typically provide less valuable free swimming space. More importantly, be prepared to do frequent water changes!

German blue rams naturally live in water that is slow-flowing with lots of plants and other vegetation. The water can range in color from heavily tannin-stained to quite clear, but will always be soft and acidic, so this is what you should aim for in your own aquarium. Additionally, the temperature should be kept at about 85 °F (29 °C) for your fish to be at its happiest.

In the aquarium, it’s also a good idea to imitate this natural environment and maintain water quality as best as you can because German blue rams are relatively weak due to inbreeding. Because of this, it is common for them to have problems if water parameters are less than ideal; so staying on top of your water changes will help improve and stabilize water quality. Never introduce these fish into an uncycled aquarium or one that does not match their natural environment.

Decoration-wise, your German blue rams won’t care much about what you use as long as there’s enough coverage of some kind. A biotope-oriented tank with plenty of driftwood, plants, and leaf litter would make a great choice. The leaves help keep these fragile fish healthy by releasing antibacterial/antifungal tannins while helping them feel safer through darkening the water. One great choice for your ram tank would be Indian almond leaves, which you can read more about here.

German blue rams are the stars of any community tank. Despite their fierce appearance and cichlid reputation, they are peaceful critters that have actually been known to group with other less aggressive fish.

Many small fish that are popular in community tank settings can usually be kept with German blue rams. Because this cichlid species needs relatively soft and acidic water parameters, try to find tankmates that appreciate similar conditions. Tetras, such as neon and black neon tetras, would make a great choice for the middle water column; various peaceful catfish species, like Corydoras and Ancistrus, would add life to lower regions. Make sure to understand that each individual fish has its own personality; be prepared to separate fish if one proves to be too aggressive for your tank!

It’s not recommended to keep German blue rams with shrimp since most shrimp species make a tempting snack! Additionally, your small rams will not feel comfortable when combined with more assertive species, like other larger cichlids.

German blue rams are omnivores and enjoy a wide range of food in their diet. They will usually nibble on anything from wafers to live foods, such as bloodworms. The aforementioned shrimp actually make a fine German blue ram food as well: if you find yourself with an exploding colony of Neocaridina davidi, for example, your rams will gladly take some off your hands.

Although you may be tempted to immediately start any new rams you’ve purchased on processed foods, it’s handy to have both frozen and live food readily available as well. It’s not unusual for these fish to refuse processed foods for the first few weeks of being introduced to a new tank. Consider having a small brine shrimp hatchery set up before you go out to buy your new rams so that you have an alternative food choice if they refuse the first; this will also help in the future to provide your fish with a wide variety in diet!

Since German blue rams are slow and shy eaters, it’s highly recommended to be patient and wait to feed them separately. Otherwise, they will not get enough of the food if they are housed in a community tank.

One of the best things about these small fish, though, is that because they come from a planted environment, they’re not likely to munch on any plants already in the tank. This means that you don’t have to worry about them resorting to your aquascape when they get hungry! Just make sure to do some research before adding new plants and/or new rams to your tank to check compatibility.

Compared to other cichlids, German blue rams are known for being relatively peaceful in the aquarium setting. Just try to provide enough hiding places and designated spots for privacy in the form of live plants and coconut caves. This way, you’ll rarely see your rams bothering other fish in the tank.

A bonded male and female usually do really well together, with the males only becoming more aggressive towards other fish when guarding eggs and fry. Even then, breeding German blue rams doesn’t cause your fish to turn into the “terror of the tank” during spawning times like with what happens with so many other varieties of cichlid.

Although there are different spawning methods, depending on a breeder’s preferences and experience, it’s often best to keep the bonded male and female rams in their own tank. Provide shallow, warm, and soft water conditions to encourage breeding. Otherwise, if the rams are kept in a community tank, the other fish may potentially eat the eggs or fry.

When a female is ready to spawn, her belly turns a bright red. After the spawning is complete, she lays adhesive eggs to a surface and both parents work together to protect the eggs. They even wave their pectoral fins over the eggs to ensure that there’s adequate water flow. If the water temperature is in the mid-80s, the eggs will typically hatch in just 40 hours. Then five days after that, the free-swimming fry will cluster around their parents to hunt for food.

There seems to be some debate about how good captive-bred parents really are, with many hobbyists commenting that they fail to protect eggs or fry in community tank settings. Some people believe this to be an indicator that wild male and female cichlids don’t have to worry so much about predation since their methods of spawning and rearing fry are not as strict as other cichlids. Other people argue that poor parenting is due to the lack of genetic diversity, which has led to the fish simply no longer knowing how to produce and raise young.

Some rams are also notorious for eating their own eggs after spawning. If you have a pair of cichlids with an insatiable craving their young offspring, you can try removing the eggs and artificially hatching/raising the fry yourself.

The German blue ram is not a fish for beginners, despite its irresistible charm and peaceful nature. It’s well-known in the hobby that these dwarf cichlids are not hardy; they are extremely sensitive to fluctuating water parameters and conditions and easily become sick. In fact, you are often considered really lucky if you have a ram live for more than 18 months.

Unfortunately, it’s believed that the German blue rams found at your local pet store are doomed to cause you heartache before you even bring them home. The belief is that they are mass-produced overseas and raised in water filled with antibacterial medications that help their body build up a resistance to diseases commonly found in a home aquarium. Then, when the fish are shipped somewhere else and placed into new water, their immune systems take a hit.

Another concern is that the fish are exposed to growth hormones and even injected with dye, usually producing big, flashy fish that are pleasing to the eye for consumers. However, this often means a short, low-quality life for the fish.

The best way to avoid supporting such practices is by buying locally. Instead of getting your fish from a big chain pet store, take a quick look for breeders or individual fish sellers in your city. Many aquarium keepers are more than happy to share the love. It’s also important to keep in mind that even when you’re buying locally, German blue rams and all included variations suffer from a lack of genetic diversity.

If you have any more questions about keeping German blue rams in your own aquarium or if you want to share your experiences with this colorful fish, don’t hesitate to leave a comment below.