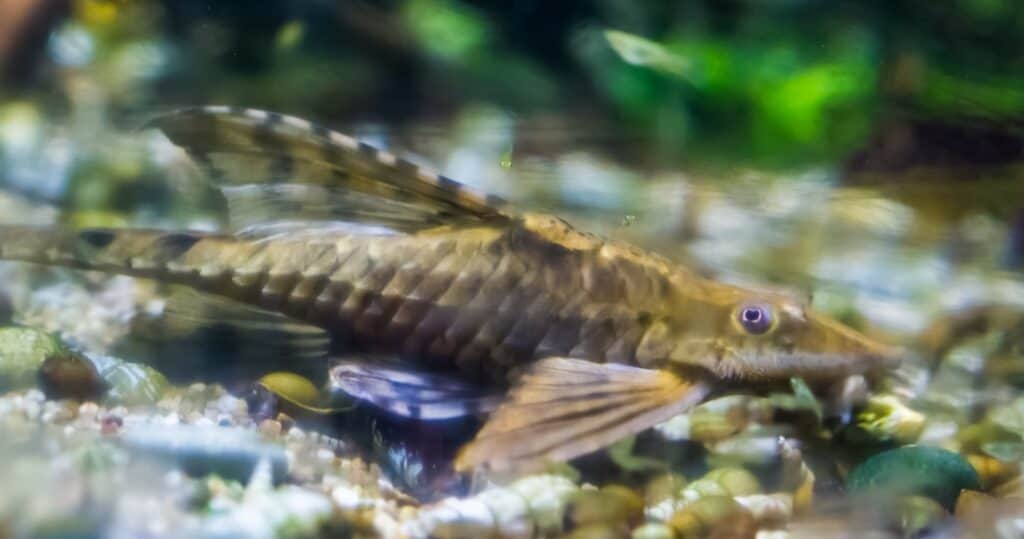 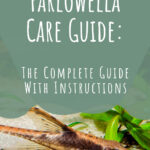 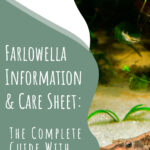 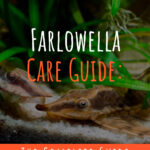 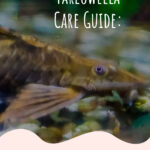 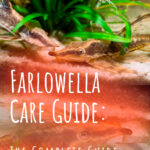 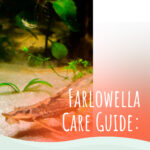 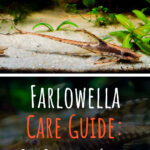 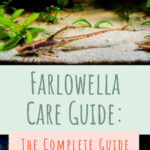 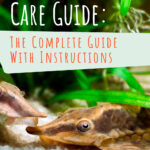 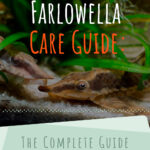 If you have a freshwater aquarium and you’re experienced in keeping the conditions in your tank perfect and well-maintained, you might fancy taking on one or more Farlowella.

These weird-looking, twig-like fish certainly have a very unusual appearance, and they certainly make a good conversation starter in any home tank!

So, if you’re up for a challenge and you want a shy, relatively inactive fish to add to your collection, read on to find out more.

Farlowella is a group or genus of fishes, rather than just one species. These fish belong to the Loricariidae family, containing the twig catfish, as these strange looking creatures are also known.

Twig catfish are also sometimes sold as whiptail catfish, but these are the same species of fish.

Both in nature and captivity, these fish spend almost all their time using their sucker mouths to attach themselves to surfaces. Twig catfish aren’t the most exciting fish to watch, as they don’t move around much other than to change locations. These fish are regarded as prey by other species, so remaining completely immobile helps them to stay camouflaged and safe.

Thanks to the overhanging canopy of trees above the water, the lighting on the riverbed where the twig catfish live is naturally dim and shady. The flow rate in these waters is slow, and the conditions are slightly acidic and soft.

You must replicate this environment in your aquarium and take care to maintain it. Farlowella is highly sensitive to unstable water conditions, and their lifespan will be shorter if you fail to manage your tank properly. As with most fish species, the closer you can keep tank conditions to the fishes’ wild habitat, the happier your livestock will be.

The lifespan of the twig catfish varies considerably from five to 15 years or even more. The fishes’ longevity depends to a large extent on the care and water conditions you provide.

Twig catfish are some of the most unusual fish in the hobby. These creatures are very thin, long-bodied fish that resemble twigs, hence their name. Along with their sedentary lifestyle, the fishes’ appearance helps to keep them camouflaged and safe from predators. These catfish are quite large in size, growing to measure around nine inches.

The fish have quite small fins, as they are not fast swimmers. The tail fin is shaped like a lyre with the top and bottom split into individual points.

The fish’s body is light brown in color with dark stripes or speckles that run the length of the body along the sides, giving the fish its twig-like appearance.

Male and female twig catfish look pretty much the same, although males are generally bigger and have a broader snout than females. When approaching breeding conditions, the male’s snout develops a mass of tooth-like structures called odontodes.

How to care for Farlowella

In this section of our guide, we explain how to care for these unusual fish.

You can keep a twig catfish in a 20-gallon aquarium or larger. However, if you want to keep a group of these fish, you will need a bigger tank to allow for their length and to ensure that each individual has sufficient space. For each additional fish, you will need to add at least ten gallons of water.

Remember that a small tank is more difficult to maintain than a larger one, so always go for the largest tank you can accommodate.

Farlowella is tropical and needs water temperatures of 75 to 79 degrees Fahrenheit and a pH in the range of between 6 and 7.

These fish don’t appreciate too much current in the tank, so you’ll need to buffer the flow from your filter outlet by using plants or decorations. An additional pump or bubbler is not required.

Twig catfish are highly sensitive to changes in their environment, and that can make these fish difficult to care for.

So, as previously mentioned, it’s critical that you maintain the tank properly. That means carrying out partial water changes and vacuuming the aquarium gravel. Use an aquarium water testing kit to keep a close eye on the water quality and make any necessary adjustments.

As these are primarily bottom-dwelling fish, you should pay close attention to the habitat at the bottom of the tank.

A sandy substrate is the best choice for these fish, as that won’t injure the catfish as they swim across the tank bottom in search of food. You should also include some pieces of wood, twisted roots, and rocks for the catfish to attach themselves to.

Thick planting is also essential for twig catfish, providing both shelter and shade.

Twig catfish are considered to be peaceful fishes, but they are also rather timid and shy. For that reason, these fish generally do best in a species-only tank where other fish do not hassle them, and there’s no competition for food.

Can twig catfish live in groups?

You can keep twig catfish in groups. Although they aren’t naturally shoaling fish, Farlowella seems to find security in living in large groups of their own species. That said, males can become territorial when mating, and they may show some aggression toward rivals, although injuries rarely occur.

What about a community setup?

You can keep twig catfish in a community tank, as long as the tank mates you choose are peaceful and slow-swimming so that they don’t frighten the catfish.

So, most cichlids are unsuitable. Small characins, including tetras and danios, make a good choice, as they won’t hassle the catfish. Invertebrates, such as snails and shrimp are fine, as they will mind their own business and leave the Farlowella fish alone.

Once you’ve set up your tank, monitor your twig catfish closely to make sure that they get plenty to eat. If your Farlowella is missing out, you may need to separate the fish.

What do Farlowella catfish eat?

Farlowella catfish stick to a mainly vegetarian diet, rasping algae from surfaces and eating plant matter in their natural environment.

In the aquarium, these fish also eat algae, although you must supplement their diet with algae wafers so that the fish don’t go hungry. Blanched green veggies are also well-received foods among this fish, so feed your twig catfish small pieces of spinach, lettuce, or zucchini as a weekly treat.

These fish also need a small amount of meaty protein in their diet to provide balanced nutrition. You can use sinking frozen foods for that, but you must make vegetable matter the primary food source for your twig catfish.

How often should you feed your twig catfish?

To make it easy for their digestive system to process the food you give them, it’s recommended that you feed your twig catfish twice a day, offering just enough to keep the fish busy for a minute or two at each sitting.

Remember that the fish will be grazing on algae constantly throughout the day, so don’t overfeed them. Uneaten food will decompose in the tank, polluting the water and placing an additional burden on the biological filtration system.

Watch your Farlowella carefully to make sure they don’t get outcompeted for food by their tankmates.

Although twig catfish are highly sensitive to water conditions, they tend to have greater resistance to many common fish diseases than many other species of tropical fish.

That could be because these catfishes have armored bodies, which can make it more difficult for parasites such as ich and flukes to attack them. That said, you should watch out for any unusual behavior, loss of appetite, or other signs of disease.

Ich is also called white spot disease and is probably the most common fish disease in the aquarium. Ich is caused by the ciliate protozoan parasite Ichthyophthirius multifiliis.

Affected fish rub and flick against the substrate and solid surfaces within the tank in response to the irritation that the parasites cause. Within a few days, you’ll notice a rash of little white spots appearing on the fish’s gills, fins, and body.

You can treat ich by dosing the water with an over-the-counter white spot treatment and raising the tank temperature to 82 degrees Fahrenheit for three days.

Flukes are also parasites that latch onto the fish’s body and gills. Again, you’ll notice your fish flicking and rubbing themselves against objects in the tank to try to get rid of the parasites, as well as secreting excessive quantities of mucus from their bodies.

You can treat flukes by dosing the aquarium water with an over-the-counter antiparasite treatment.

Fungal infections typically appear as cotton-like growths on the fish’s body, fins, and head. You can treat most forms of fungus by dosing the water with over-the-counter antifungal medication.

Bacterial infections commonly occur following minor injuries and as the result of stress. Bacteria of various species live within most tanks, only causing problems for your fish when some external cause weakens them.

Fish suffering from bacterial infections usually develop sores, ulcers, or red patches on their skin, and the gills can also be affected. Most bacterial infections can be successfully dealt with by dosing the water with over-the-counter antibacterial medication that you can get from your local fish store.

Although it’s actually relatively easy to breed Farlowella, the conditions in the tank must be absolutely ideal for them. You can encourage spawning by raising the tank temperature to around 79 degrees Fahrenheit and providing your fish with a high-quality diet.

Courting generally happens at night when the tank lights have been turnout out, so you most likely won’t get to witness the fish actually breeding unless you have moonlights in your aquarium. These catfish are egg-layers, fixing the eggs to flat rocks, wood, and the tank glass. The male guards the eggs, fanning them with his tail to maintain the fry’s optimum temperature for development.

After a week or so, the eggs hatch, and the fry are free-swimming within five days. Twig catfish fry are sensitive to poor water conditions, and they can also be difficult to feed, so don’t be too surprised if you lose most of the fry after just a few days.

Try feeding the fry on green veggies such as spinach or lettuce, and make sure that there are plenty of algae in the tank for the fry to graze on, too.

Twig catfish are not commonly found in fish stores, and you’re most likely to find specimens online through specialist dealers.

That said, these fish are not expensive to buy, typically retailing at just a few dollars.

If you have a tank that’s already well-established, it’s unlikely that Farlowella will make a suitable addition to your setup. That’s because these fish are highly sensitive to tank conditions, and the tank mates you choose must be carefully considered. So, your best bet is to establish a species-specific tank from scratch, which is best done by a hobbyist with some fishkeeping experience.

That being said, if your tank conditions do suit Farlowella, and you’re prepared to spend time maintaining and managing your aquarium to suit them, these unusual fish can make an interesting member of a peaceful community.