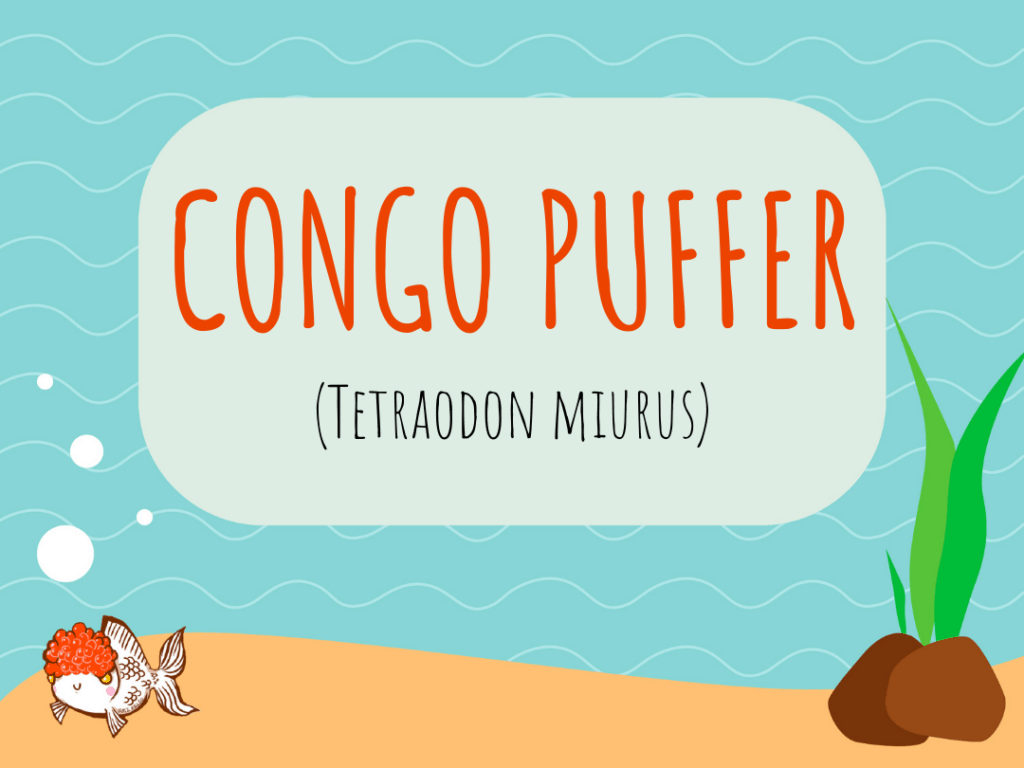 Most pufferfish are known for their bold personalities and beautiful colorations. The Congo puffer is no exception and is becoming an increasingly popular species within the freshwater aquarium hobby. Like other pufferfish, the Congo puffer does best in a tank by itself; this can be boring for some hobbyists, but any puffer-keeper knows that these fish can quickly fill up a display!

Keep reading to find out everything you need to know about Congo puffer care and how these fish might be a little more challenging than other related species!

Tetraodon miurus is commonly known as the Congo puffer and the potato puffer. As we’ll discuss later, these fish originate from the Congo region and tend to resemble the vegetable of the same name.

As a species of puffer, these fish are able to inflate their stomachs with air or water in defense to predators. As a member of the Tetraodon genus, this also means that they carry the deadly neurotoxin, tetrodoxin. However, this poison can only enter the bloodstream if the fish is ingested and serves little to no threat when handled and/or prepared correctly.

As its common name suggests, the Congo puffer is from the Republic of Congo and the Democratic Republic of Congo in Central Africa. These fish can be found in rivers of all sizes, even those with considerable flow and rapids. Most of the time, these fish will be buried in the soft substrate waiting to ambush passing prey.

The Congo puffer may be difficult to identify at first because it has the ability to change colors based on its surroundings, much like a chameleon. Most often, these fish display natural tones of greens and browns in order to blend in with the substrate, rocks, and fallen trees and vegetation. However, they have also been known to show deep reds and oranges and various patterns depending on their current demeanor.

One interesting anatomical adaptation of these fish is their upward-pointing mouths. As mentioned before, these fish like to hide in the sandy substrates of fast-flowing rivers waiting for smaller fish and invertebrates to pass by. An upward-pointing mouth allows the fish to easily suck up prey without having to expose itself beforehand.

The dorsal fin is also very close to the caudal fin and can lay flat against the back for extra concealment.

How big do Congo puffers get?

While this might not seem like a lot at first, you will need to consider substrate depth as well as tank size and tank mates.

While there is a good chance that your Congo puffer might remain hidden in the substrate for most of the day, this fish still needs a reasonably sized aquarium setup. For one Congo puffer, a minimum tank size of 40 gallons (151.4 L) is recommended.

In order to best replicate their natural conditions in the wild, a sandy substrate, rock cave formations, and cured driftwood will greatly be appreciated by your pufferfish; hardy, fast-growing plants may be added, though are not necessary.

One of the most important aspects of setting up a good Congo pufferfish aquarium is the substrate. The Congo puffer is an ambush predator that relies on the substrate to conceal itself from prey. This means that the substrate should be at least 3-5 inches (7.6-12.7 cm) deep throughout the aquarium so that your puffer can bury itself.

The problem that comes along with a deep sandbed, however, is the waste and debris that gets caught. Tank maintenance is especially important with puffers as they are messy eaters, which can affect water parameters over time. Good filtration, regular water changes, and substrate vacuuming are necessary for keeping your Congo puffer happy and healthy.

Congo pufferfish are predatory fish. They have a sharp beak that acts as teeth that helps tear meat and cut through hard shells.

Because of this, Congo pufferfish tank mate compatibility is near zero; while there’s always the possibility that your fish won’t eat other larger fish that you introduce into the aquarium, it’s always better to be safe than sorry and give this puffer a tank to itself!

Can you have two puffers in one tank?

Some species of pufferfish, like pea puffers (Carinotetraodon travancoricus), may be able to be kept together in groups, but the Congo puffer cannot. These fish set up territories and will attack and/or eat anything that comes within those boundaries.

Pufferfish have the ability to inflate if threatened or stressed. Many times, hobbyists experience their puffer inflating in the aquarium with no apparent cause. If possible, look for reasons that might cause this behavior, such as volatile water parameters, physical changes to the aquarium setup, or external stresses. Also, avoid sharp objects that could potentially injure your pufferfish.

For the most part, your Congo puffer will stay buried in the sand or hidden under rocks. However, one of the best parts of pufferfish is their bold personalities and unique hunting styles!

Pufferfish are adored by hobbyists because there isn’t another fish species quite like them. While each fish might have its own character, pufferfish have their own personality that can fill up a large tank!

One of the best things about having a puffer is feeding times; usually, these fish need to be fed live food which gives an opportunity to get a glimpse of their natural behaviors while in captivity. Some hobbyists have found that their puffers recognize their owners and might be a little more active when they’re around as they’re anticipating food!

While Congo puffer diet might be specific, the display is definitely worth it.

The Congo puffer is mainly a piscivore. This means that their diet largely revolves around consuming other fish. Because of this specific diet, Congo puffer care might be slightly more challenging than other freshwater fish and some species of puffer.

On top of this, Congo puffers might reject any food that isn’t alive. Some hobbyists have had luck transitioning their Congo onto frozen foods, though this will take time and effort.

Otherwise, it’s best to feed live foods, like feeder fish, shrimp (prawns and krill), and eventually earthworms and shellfish; some have had luck getting their Congo to accept a snail every now and then–which will also help keep your puffer’s beak trimmed–though this is very unlikely as well.

Remember to always get food from a reputable source in order to guarantee the best nutrition and to keep your fish parasite-free. In order to have complete control over the diet of your fish and to always have food available, it’s recommended to set up a separate breeding tank for such purposes.

Due to the aggression and space requirements of the Congo puffer, breeding in captivity has not yet been achieved. Placing two puffers in the same aquarium can quickly result in death and should never be tried unless a pufferfish expert!

The Congo puffer isn’t the most popular species of pufferfish in the hobby just yet, but its bold personality, chameleon colors, and interesting hunting behaviors make it one of the more desirable types of puffer to have. These fish can be slightly more difficult than other freshwater puffer species as they need a larger tank to themselves and rely on a live diet of fish and invertebrates. However, if you have the room and ability to commit to a specific diet, then the Congo puffer could be for you!

If you have any questions about Congo pufferfish, other types of freshwater puffer, or have had experience caring for one of these apex predators, don’t hesitate to leave a comment below!