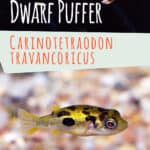 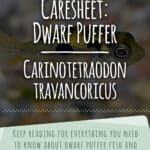 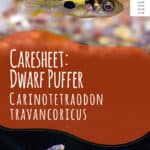 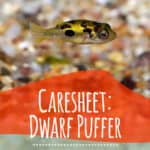 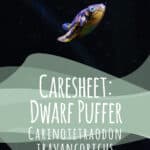 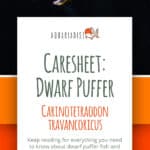 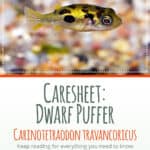 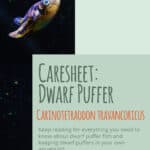 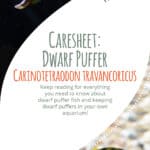 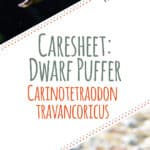 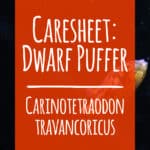 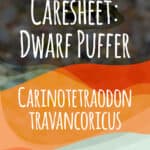 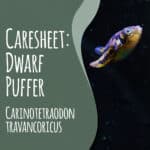 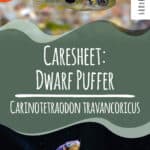 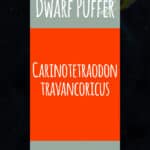 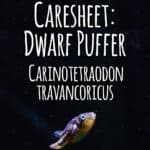 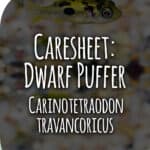 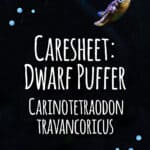 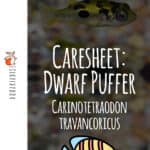 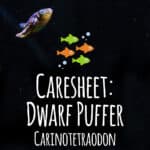 The freshwater dwarf puffer might not be the ideal fish for a community tank setup, but its cute looks and fascinating behavior make setting up a special tank just for the fish well worth it.

In this article, we’ll tell you everything you need to know about caring for dwarf puffer fish.

The dwarf puffer fish’s scientific name is Carinotentraodon travancoricus, but it also has many common names, including:

Dwarf puffers come from the Malabar region of southwest India, where they inhabit slow-moving rivers and streams. Thanks to deforestation, overfishing for the pet trade, and urbanization, dwarf puffers are now listed as vulnerable on the IUCN Red List of Threatened Species.

These tiny fish are the smallest of the puffer species, reaching an adult size of only about an inch long.

The puffer’s eyes move independently, which allows it to look closely at something without having to move.

The fish’s colors change depending on its mood, varying from green to brown with dark spots. Its underbelly is yellowish or white and should appear smooth after the fish has eaten; if the puffer’s yellow or white belly appears lumpy, that’s often a sign of internal parasites.

You can tell male puffer fish from females by the dark line that runs along the male’s belly and the “wrinkles” behind his eyes.

How long do dwarf puffers live?

The average lifespan of dwarf puffers is up to four years, though they can live longer than that if they’re provided with a high-quality diet and optimal tank conditions.

Dwarf puffers are intelligent and active little creatures. They are curious and very aware of what’s going on outside of the tank. Although shy at first, dwarf puffers do come to recognize and interact with their owners.

These fish have their own unique swimming pattern, which makes them fun to watch. They swim in all areas of the tank but tend to stick to the middle area of the water column.

When you first get your dwarf puffer home, you might notice it swimming with its tail curled inward. That’s usually a defensive gesture, but once the puffer has settled in, it will uncurl its tail again.

Is the dwarf puffer fish poisonous?

Many urban myths surround the toxicity of puffers, and we’re debunking some of them for you here.

Indeed, some species of puffers are toxic if consumed. For example, the Japanese dish fugu can only legally be prepared by a licensed, specially trained chef. The fish used to prepare the dish are found in salty or brackish water and are not the same species as our tiny freshwater friend the dwarf puffer.

In small amounts, the toxin in fugu can produce a pleasurable degree of numbness or tingling in the mouth or lips, and it even produces a slight high. However, if certain organs of the fish are eaten, the toxin is so powerful that it can cause death.

You should know the toxin found in certain species of puffer fish is entirely diet-related. Toxicity levels vary throughout the year, depending on the availability of the food from which the toxin came.

Particular types of algae and bacteria are required in combination, both of which are found in certain mollusks’ shells. The puffer must eat large quantities of both these elements. If one or either of those items is not present, the toxin is not produced.

In marine puffers and some other brackish species, the toxin is called tetrodotoxin. The poison is mainly concentrated in the fish’s organs rather than in the flesh. Freshwater species produce a different toxin called saxitoxin, which accumulates in the fish’s flesh and causes death if ingested.

In light of the information above, you can see it’s highly unlikely your tiny dwarf puffer will produce any toxins at all…and we would hope you weren’t planning on eating your pet fish, anyway!

Dwarf puffers don’t exude toxins into the aquarium water, either, so they present no danger to you or any of the fish’s tank mates.

Unfortunately, despite their super cute looks, dwarf puffers are not suitable for life in a community tank. They generally do better in a single species tank or kept alone.

Each puffer fish has an individual temperament and personality, which is one of the most endearing things about them. However, that can mean even a placid puffer can have an aggressive streak that appears without warning. Puffers are highly territorial and belligerent and will kill fish much larger than themselves.

That said, some hobbyists have kept dwarf puffers safely with Otocinclus, Kuli loaches, and golden puffers.

If you have a large enough tank, you can keep dwarf puffers in small groups. However, there will always be one dominant fish in the group — usually a male. As the fish mature, they tend to become more aggressive. So, it’s best to keep one male with three or four females for a harmonious tank.

You can help keep things peaceful in the tank by using lots of dense planting, hiding places, and caves as well as keeping the fish well-fed.

Can you keep dwarf puffers with shrimp?

Unfortunately, pea puffers are known to eat shrimp — or at least try to, anyway!

Remember the puffer is aggressive and carnivorous, living on a diet of snails, worms, and small crustaceans. So, a tiny shrimp might be viewed as a potential meal.

However, if you choose a large variety of shrimp, there’s a chance the two creatures can live together relatively peacefully. Make sure you provide plenty of spaces for the shrimp to hide and don’t introduce any that are smaller than the puffer.

Now that you know more about the dwarf puffer, you’ll need to know exactly how to care for them.

Since dwarf puffers are so small, they don’t need a very large tank. A 10-gallon tank is ideal for a single dwarf puffer, however, if you want to keep more than one fish, a 20 to 30-gallon aquarium works better. If you’re keeping just one puffer, a nano tank can work, as long as the filtration is adequate.

Puffers don’t have scales or gill covers, which can make them highly vulnerable to diseases, ammonia, nitrite, and nitrate levels. For that reason, and because puffers are messy eaters, we don’t recommend you keep puffers in a brand new, newly-cycled tank.

To keep the water conditions safe for your dwarf puffer, you’ll need to carry out regular water changes — specifically 30 to 50 percent every week. You’ll also need to use a powerful canister filter that circulates water through the aquarium six to 10 times per hour.

That said, these fish live in slow-moving waters, so you’ll need to ensure the flow through the tank is moderate and buffer the filter outflow if necessary.

Dwarf puffers are freshwater fish that don’t require the addition of salt to the tank. That said, in some areas, puffers do live in brackish waters and can tolerate those conditions in the aquarium.

Puffers are very bright and inquisitive fish that need a well-decorated aquarium to keep them happy. Plus, if the tank is well-decorated, it’s less likely the fish will display aggressive behavior. Include plenty of plants in the aquascape, as well as driftwood, caves, and rockwork that can disrupt the fish’s line of sight and provide plenty of hiding places.

Puffers can become stressed if they see their reflections in the glass, so you should prevent that by making sure you have a well-planted tank and strategically using the aquatic greenery to cover the fish’s reflection. Tall plants in the tank’s corners also provide an interesting swimming area for the puffers, and floating aquarium plants are also a great source of entertainment for them.

The substrate should be light and sandy, as puffers like to root around in search of scraps of uneaten food.

As far as lighting is concerned, puffers are fine with normal levels of lighting.

Dwarf puffers are carnivores. Wild puffers love to feed on snails, and you can replicate that in your tank by feeding highly nutritious Ramshorn snails. Breeding Ramshorn snails is pretty easy, so you can create your own supply.

How much and how often should you feed your dwarf puffers?

Dwarf puffers are very slow eaters, so don’t put too much food in the tank at one time. You need to feed your fish once or twice a day, offering only what they will eat in about five minutes.

Puffers are greedy fish and will generally eat whatever they’re offered. Take care not to overfeed your fish, as that can cause kidney and liver problems in the long term. Your puffer should have a rounded belly, but it shouldn’t be bulging.

Since the wild dwarf puffer population has declined by 30 to 40 percent over the last five years, attempting to breed them is very important. If these desirable fish were produced in greater numbers commercially, the need to harvest them from the wild would be reduced, and their decline could be reversed.

If you want to try to breed dwarf puffers, you’ll need to have more females than males to prevent the females from being hassled too much.

You can often trigger the breeding process by using slightly cooler water than usual for water changes, then increasing the tank temperature by between five and 10 degrees. Offer the fish plenty of high-quality live food to bring them into prime spawning conditions.

These fish are plant-spawners, so you need to include some Java moss in your setup. The fish scatter their eggs in the open water, where they then fall into the vegetation where the male fertilizes them. Unlike most other puffers, the dwarf puffer doesn’t guard the eggs, so be sure to provide lots of plant cover to protect them.

Ensure that your spawning tank filter generates a decent flow past the eggs to prevent fungus from forming.

The fry will start to hatch after about five days. You’ll need to place them in a separate tank so the adults don’t eat them. You can put the fry into a 10-gallon aquarium to grow; just leave the bottom of the tank bare, and be sure to keep it scrupulously clean.

Initially, the fry will feed on infusoria. Once the baby puffers are a week or so old, you can feed them microworms and baby brine shrimp.

Unlike larger puffers, the dwarf puffer’s teeth generally don’t require clipping, as long as you provide them with plenty of snails to eat. Biting on the snail shells will help grind the puffer’s teeth down without the need for your intervention.

Sometimes, wild-caught dwarf puffers carry internal parasites, so you need to ask the supplier if the fish has been de-wormed. If it hasn’t we recommend you do that sooner rather than later.

Note: you should never use medications that contain copper to treat dwarf puffers.

Dwarf puffers are usually readily available in most fish stores for a modest price, and the adorable little fish makes a fascinating addition to your aquarium hobby.

Since these fish are very aggressive and intolerant of other fish, it’s best to keep them either alone in a small tank or with others of their own species in a larger setup.

Keeping one puffer can make a nice alternative pet to a betta or even a goldfish, however, since this puffer doesn’t have scales or gill covers, bear in mind that you can’t introduce one to a tank that’s newly cycled.