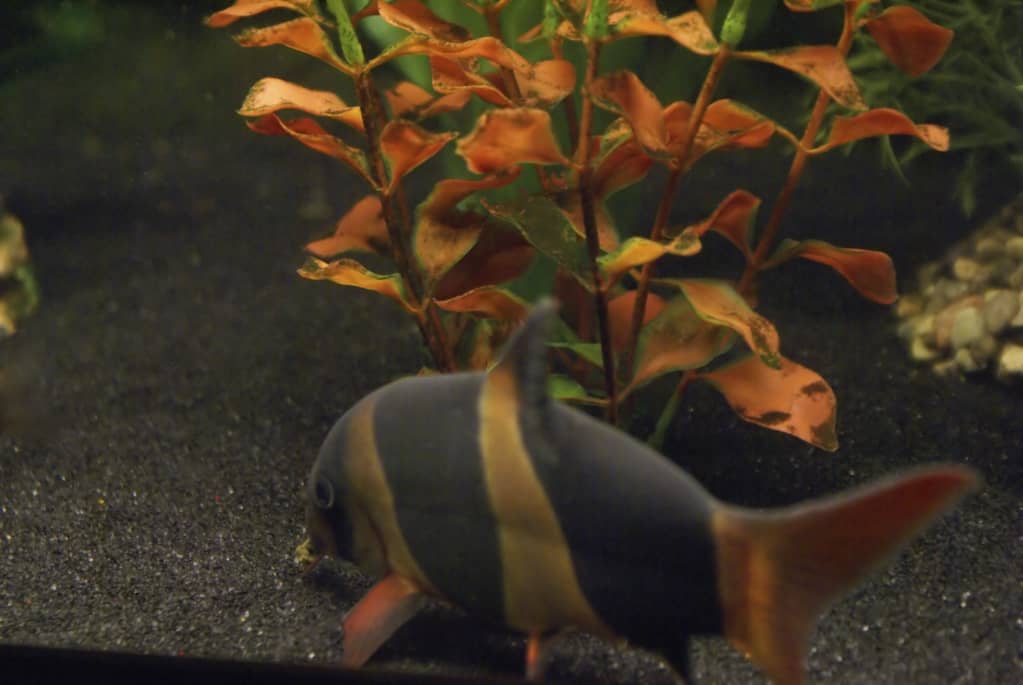 Juvenile clown loaches can be found for sale in almost any aquarium store. Their contrasting black and orange stripes and their tendency to snack on nuisance snails make them a popular beginner’s choice, but they are actually on the list of the 8 worst beginner aquarium fish!

Keep reading to find out everything you need to know about keeping clown loaches before adding them to your aquarium!

Clown loaches are native to the Greater Sunda Islands of Borneo and Sumatra, spanning across Indonesia and into Malaysia. Depending on the time of year, the clown loach can be found in large groups in a variety of ecosystems. Adults remain in river channels with running clear water until the annual wet season causes them to travel upstream to murkier areas for breeding. The adult clown loaches will then return back to their original habitats while the juveniles are protected and nourished by thick vegetation and detritus coverage from the rich floodplains.

The clown loach has a body shape similar to other fish from the Botia genus, like yo-yo loaches and zebra loaches, but can grow to be 20–30 cm (8–12 in)! Their lateral compression and forked tail allow for sudden and fast movement on the riverbed, while their stark black and orange colors may further help with camouflage and/or deter large predatory fish. With four pairs of barbels, this fish is ideal for sifting through soft substrates and scouring the lower water column.

Interestingly, clown loaches from Borneo differ so much from the Sumatran counterparts that they could eventually become separate species; Borneo clown loach populations seem to have blacker pelvic fins and pale borders to their bands, while those in Sumatra have redder pelvic fins and defined bands.

If you’re considering this fish, be sure to keep their potential size in mind. They are also very active fish that like to be kept in large schools of at least 6-8. This means they are not suitable for small aquariums and do best in at least 100 gallons (378L). Because they are bottom dwellers, it’s especially best to go for a long aquarium with plenty of floor space and a soft substrate.

Heavy planting/decorating and relatively subdued lighting are also good ideas, as wild loaches live under the shaded canopies of the rainforest. They also like to uproot and even nibble on weaker plants, so it’s best to go for strong plant species that thrive in low-light aquariums and can handle being picked at occasionally. Anubias is a great hardy choice that can withstand your clown loaches appetite!

Clown loaches are very sensitive fish due to their small scales. They will easily succumb to diseases like ich or ammonia poisoning if the water quality in the aquarium is less than ideal. This means the aquarium should always be fully cycled and established before these fish are introduced. Doing regular water changes and filter maintenance is a must. You should also have appropriate medications on hand just in case.

Because they naturally inhabit rivers with soft acidic water, these fish prefer a strong water flow and a pH of around 6-7, although they can tolerate slightly higher. If your filter doesn’t create a strong flow, you can consider placing an air pump at the surface to increase water flow and oxygenation.

Clown loaches can be housed with many different species of tropical community fish, so long as that fish can keep up with the activity level of the clown loach. Popular tankmates are barbs, rainbowfish, and other loaches. They may also be paired with similar bottom dwellers, like the Khuli loach or Bristlenose Pleco, to create a ‘loach tank.’ Because of their potential size and large groups, many aquarists choose to designate a species only tank.

Long-finned or very calm and peaceful tankmates like guppies, bettas, and gouramis may be stressed out and nipped at. Any species of invertebrate may also be difficult to keep with these fish as it may become a quick meal!

It is also important to consider the different water levels at which your fish actively swim in your aquarium; some fish like to swim at the top while some fish like to swim at the bottom. Just because clown loaches prefer the bottom does not mean you can overstock with other species to fill out the rest of the tank. Always consider how adding additional fish will affect your water parameters and bioload.

In the wild, clown loaches have access to an array of freshwater critters like worms, snails, and other small invertebrates. A clown loach in an aquarium should have a mixed diet in order to reach maximum size. As omnivores, they should be given an assortment of algae wafers, earth/blood worms, brine shrimp, shrimp pellets, and vegetables, but will also snack on flakes that don’t get eaten by other fish.

In particular, this fish is known for its taste for aquarium snails. However, they should never be purchased just to combat a snail problem as the snails will quickly disappear and their food source will be depleted.

Clown loaches are known for their silly behavior and, you got it, clowning around. Their social structures are quite complex and they will establish a hierarchy within the group with one dominant fish as the ‘leader’. While fighting, playing, or eating, your fish may produce loud clicking noises that increase in volume with excitement. This is your clown loach trying to communicate with other fish by grinding its teeth.

While clown loaches are not aggressive, they are very active so you may also occasionally see them fighting or dancing. As a group, your fish may pace around your aquarium from side to side and up and down. While the exact reason for this is unknown, it is hypothesized that it’s a natural reaction to something new entering the water, like food or a hand.

Another interesting and sometimes rather disturbing clown loach behavior is the way they sleep and hide. This fish loves to crawl into small spaces and then stays there for extended periods of time, which can make them very difficult to locate. When you do finally manage to find them (wedged under some rocks or driftwood), they may be upside down, upright, or on their sides, appearing dead or dying. While a worrying sight, this is a natural behavior of this fish and nothing to be concerned about!

Note: Botia species have a sharp spine on the side of their head that can be raised as a defense mechanism when the fish is agitated. Always keep this in mind when handling your clown loach as it can easily hurt itself or even you! Be sure to prevent the fish from getting tangled in nets and consider wearing gloves if you have to catch them.

In their natural habitat, clown loaches migrate to calmer waters to breed, making breeding nearly, if not, impossible in an aquarium setting. Replicating these conditions would mean having an established aquarium for the adults, as well as a different tank with murkier water and more foliage coverage for the juveniles until they were a decent size; smaller clown loaches are more susceptible to harassment by large adults and other species.

If your fish does go through a breeding period in your display aquarium, its eggs will most likely be eaten before they can be fertilized, possibly even by the parent! This means that nearly every clown loach you see was caught in the wild.

Clown loaches are not beginner fish and should never be bought for small aquariums or to combat nuisance snails. While their small size may initially be deceptive, it is important to remember their potential growth and being able to provide a large enough aquarium for their needs. Clown loaches may be kept with other species of loach to create a ‘loach tank,’ with other active fish, or in a group of themselves. Water parameters should be stable with subdued lighting and a large amount of plant coverage.

When selecting a clown loach to buy, size should always be considered with respect to the other fish in their group, tankmates, and the size of the aquarium. Colors should be bright and vibrant from a mixed diet of snails, brine shrimp, and vegetables. They should never be bought with hopes of breeding as chances are very slim. But with proper care and attention, their cheerful behavior can really brighten up an aquarium!

If you have any more questions about keeping clown loaches or if you want to share your own experiences with these fish, be sure to leave a comment below. Happy fishkeeping!