How To Best Care For A Zebra Loach 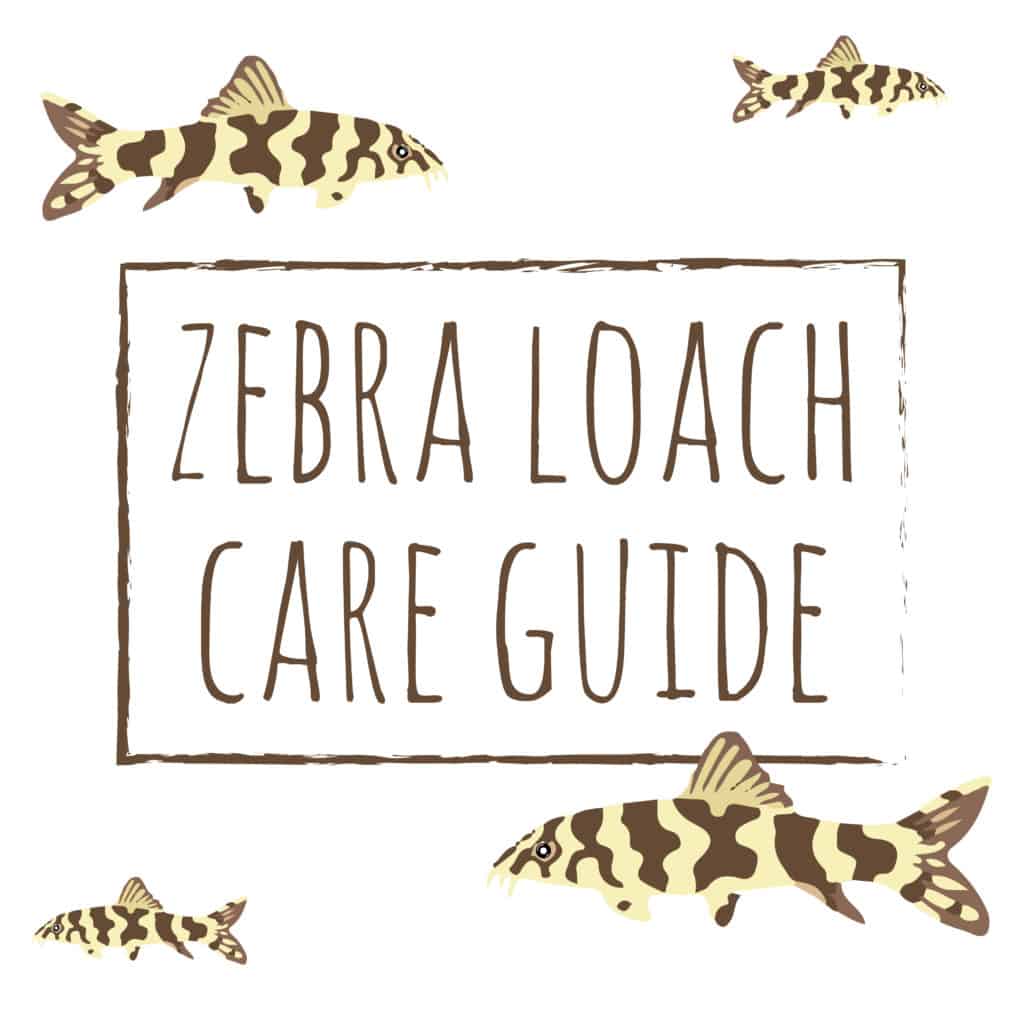 The Zebra Loach is an attractive, lively freshwater tropical fish that’s an excellent choice for a beginner hobbyist. These peaceful fish can live in smaller aquariums above 30 gallons, although they are intolerant of fluctuations in the tank water parameters.

In this guide, we introduce the Zebra Loach and provide you with all the information that you’ll need to ensure that your new pet thrives.

What is a Zebra Loach?

The Zebra Loach is also known by the common names:

The Zebra Loach’s scientific name is Botia striata, and they belong to the Cobitidae family. Striata, when translated, means striped, and the fish is so named because of its pattern of around nine, broad vertical bands of dark bluish-green that are set against a yellowish-green colored body. The Zebra’s bands have an inside white band that can be branched or straight.

The fish’s tail and fins are translucent with bands of brown spots along the tail. The striata Botia has four pairs of barbels around its mouth that are used for detecting items of food on and in the substrate.

Determining the different sexes is almost impossible. However, a female in breeding condition will be slightly rounder in shape than a male. Juvenile and young fish often have a red nose, which fades as they mature.

Zebra Loach Botia striata have a life expectancy of between eight and 15 years, growing to about four inches in length when mature.

Botia striata were first described in 1920 by Narayan Rao, who discovered the species living in Mysore in the Western Ghats mountain range in southern India. Sadly, the fish has a very limited range these days and is found in only four locations, since deforestation and pollution have caused the destruction of much of the species’ habitat. Botia striata are also found in Bangladesh in northern India, where they inhabit rivers and slow-moving streams.

Because of dwindling numbers in the wild population, the Zebra Loach appears on the IUCN red list as an endangered species.

The fish’s preferred habitat is slow-flowing waters, depending on the season. The substrate in these areas is usually made up of fine gravel, sand, and leaf litter with a scattering of boulders and exposed areas of bedrock. The fish prefer to frequent the dimly lit, shaded areas beneath the forest canopy.

Care of the Zebra Loach

Although widely considered to be suitable for beginner hobbyists, the Zebra Loach does need to be cared for correctly if it is to achieve its long lifespan in the tank environment.

The Zebra Loach should be kept in groups of at least five fish. For that reason, you will need a tank size of at least 30 gallons to house a collection of these fish, larger if you are thinking of adding more specimens to your collection. Remember to allow at least one gallon of water per inch of fish.

Striata Botia has been known to jump out of a tank, so be sure to use a cover slide and a tightly fitting lid on your aquarium.

The most important thing to note about the Zebra Loach is that these fish require well-oxygenated, pristine water. For that reason, you should never introduce this species into an immature biological filter setup.

Ideally, the tank water should be turned over at least ten to 15 times per hour. When choosing a filter, the best type to go for is an under gravel type of system that generates a high level of oxygen throughout the tank, as well as keeping waste down. If necessary, add an extra powerhead to your setup. That said, the water current flowing throughout the tank should be relatively gentle.

As well as an efficient filtration system for your setup, you’ll need to carry out a 30% water change each week. Also, be sure to vacuum the substrate thoroughly to get rid of leftover fish food and waste. However, you do need to leave any biofilm on the decor and rocks, as the fish will feed on that.

Loaches need soft, slightly acidic freshwater and do not tolerate a brackish environment. The pH level should be between 6.5 and 7.5, with the water hardness in the range of 5 to 12 dGH.

The water temperature should be in the range of 730 to 790 Fahrenheit.

The aquascape should include plenty of plants and open areas for swimming. Loach Botia striata are quite a shy species, so be sure to include lots of caves, roots, and rocks where the fish can hide and explore.

Make sure that the substrate is comprised of fine gravel or sand that does not contain sharp material that could injure these bottom-dwelling fish.

Zebra Loaches are one of the more peaceful species of Botia, which makes them a good addition to a community tank. The species is happiest when kept in a small school of five or more, rather than being kept singly or in a pair or smaller group where the dominant fish will become aggressive, preventing its companion from feeding and generally harassing it.

Good tankmates include other non-aggressive species of Botia, such as the Clown Loach. Tinfoil barbs also get along well with Botia striata. The Botia striata can be aggressive if forced to compete for space in a tank setup, and, therefore, species to avoid include other species of fish that inhabit the lower regions of the aquarium, including members of the popular Corydoras catfish family.

Note that Zebra Loaches will eat small snails, which makes them very useful for controlling snail numbers in your aquarium, and any invertebrates, including shrimps and crabs, will quickly become part of the Loaches’ diet. Also, Botia striata are known to nip the trailing fins of slow-moving fish such as bettas and angelfish. Even guppies and long-finned species of tetra can be intimidated by curious Botia striata.

Zebra Loaches are omnivorous and are typically not fussy eaters.

Live and frozen food, flakes, sinking pellets, and tablets are all acceptable for your Botia, and they will also eat algae that are growing on the surfaces and decorations within the tank environment. These fish are primarily nocturnal, so feeding them after lights-out is best. That said, once the Botia has settled in their new home, you will most likely find that they become active during the daytime too.

Also, remember that the Botia Loach is a bottom-dwelling species, so make sure that enough food falls into their territory, especially if your community contains a lot of midwater fish.

At the time of writing, there are no reports of Zebra Loach Botia striata being bred successfully by hobbyists. However, commercial breeding for the trade has been made successful through the use of hormones.

Although the Zebra Loach is pretty hardy provided that the aquarium conditions and diet are correct, the species is susceptible to a few common freshwater fish diseases, largely because it has very faint body scales and no head scales.

Also, as Zebra Loach Botia striata are sensitive to many of the medications that are used to treat common fish diseases, you must remove a sick fish from the main aquarium and treat it in a separate hospital tank. It’s worth noting that many of the diseases that can affect Zebra Loaches are triggered by stress, which is typically caused by cold water temperatures and water condition fluctuations.

Ich, short for Ichthyophthirius, is also called white spot disease. Ich is a parasite that attacks almost all species of freshwater aquarium fish, especially Loaches. Ich presents as a rash of tiny white dots sprinkled across the fish’s body, gills, fins, and tail.

Although Ich is easily treated with over-the-counter medication that you’ll find in your local fish store, Zebra Loach Botia can be sensitive to certain treatments, so you should check the manufacturer’s directions and contraindications to make sure that the medication is safe for your fish.

Loaches are susceptible to a condition called skinny disease. If your fish is well-fed and is eating a healthy diet but still loses weight, there’s a strong chance that it has contracted this condition.

The skinny disease is caused by internal parasites and can be relatively easily treated with a proprietary medication that you’ll find at your local fish store.

Anything that you add to your aquarium has the propensity to bring bacteria or parasites with it. That includes fish, plants, decorations, substrate, and live food.

New fish should be kept in a separate quarantine tank for a week before introducing them to your main display tank, and it’s a good idea to wash any new plants and aquarium decorations with a dilute solution of antibacterial water treatment before you put them into your tank.

The Loach Botia Striata is widely available for sale in most good fish stores and online from specialist dealers. These specimens are usually juveniles and will probably be quite small in size. But if you’re planning on adding more specimens to your aquarium, do bear in mind that striata Botia do grow to a size of four inches or thereabouts.

In this part of our comprehensive guide to Botia striata, we answer some of the most frequently asked questions that potential owners of the species ask their local experts.

Q: How big does a Zebra Loach get?

A: A mature Zebra Loach grows to around four inches in length.

A: Yes. The species is an algae-eater. That said, you must supplement your fish’s diet, as these freshwater fish are omnivorous, requiring a high-protein diet of meat and other vegetable matter to remain healthy and thrive.

Q: How many Zebra Loaches should be kept together?

A: It’s not a good idea to keep this species singly or in small groups of two or three, as bullying can occur if one fish is dominant. Instead, you should keep a school of at least five Botia. Remember to allow one gallon of water per one inch of fish when stocking your aquarium.

A: Yes. Any invertebrates that you introduce to the aquarium with Botia striata will quickly become lunch. The fish will simply flip the shrimps over and rip the flesh right out of the shell.

The Zebra Loach Botia striata are peaceful, attractive fish that can be kept in groups of at least five specimens in a well-maintained, mature home aquarium setup.

Although Botia does eat algae, you will need to offer your fish a balanced diet that includes a high proportion of meat protein, as well as vegetable wafers and flakes. This species of Loach does not adapt readily to being bred in the home aquarium, although most fish stores do stock them.