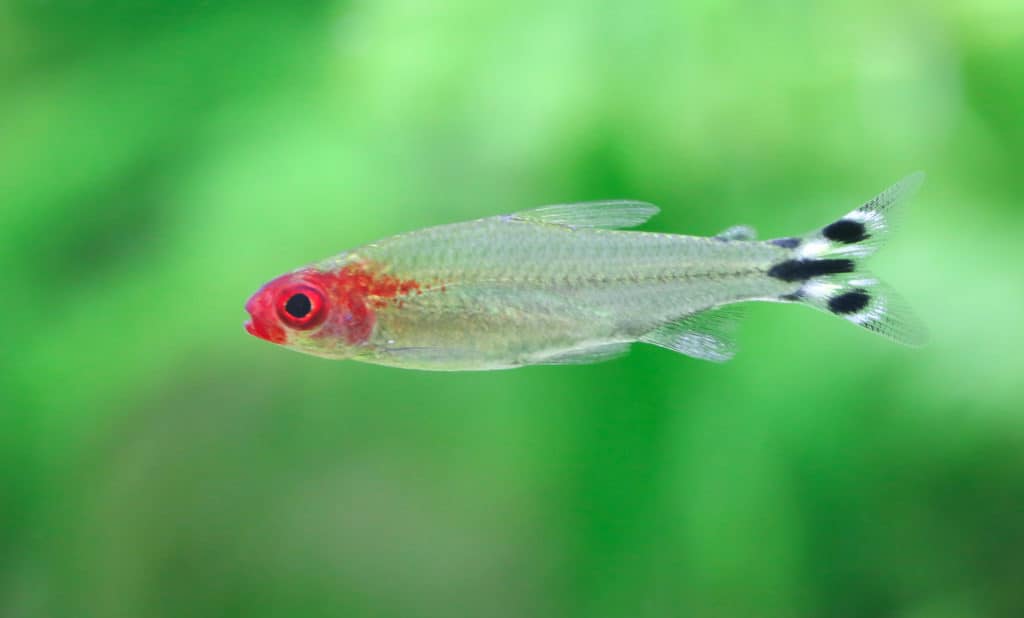 The Rummy Nose tetra is a brightly colored, peaceful schooling fish that’s a popular member of many communities in aquariums throughout the world.

These cute little fishes are easy to care for and will thrive if given the correct conditions and a balanced diet. Because these tetras are fussy when it comes to water conditions, they are better-suited to hobbyists with some experience rather than complete beginners.

In this comprehensive guide, we explain in detail how to look after and breed these beautiful fish in your home tank.

The species was first described in 1986 by Géry and Mahnert, and it is not currently listed on the IUCN Red List as vulnerable or endangered.

Hemigrammus bleheri is found in South America, specifically in the Rio Negro in Brazil and the Rio Vaupes in Columbia, where it is confined to the acidic, black water upstream tributaries of the Amazon.

Although this fish is usually called the Rummy Nose tetra, it’s actually one of three species of Rummy Nose. The Firehead tetra looks very similar to the “true” Rummy Nose or Banded Rummy Nose, Hemigrammus rhodostomus, and the Black-finned Rummy-Nose Petitella georgiae.

The differences between these three characins are so slight as to be barely noticeable. However, H. bleheri is the only species to have the red area of its snout that extends beyond the gills. Thanks to its superior coloration, the Rummy Nose tetra for sale is the variant that you’ll find most often in fish stores.

Thanks to selective breeding, you may also find a golden or greenish color morph sometimes available, and a school of a mixture of the two can make a spectacular, shimmering sight in your display tank.

The Rummy Nose tetra should not be confused with the Rummy Nose rasbora, which is a totally separate species.

The Rummy Nose tetra is a pretty little fish that grows to reach roughly 1.75 inches in length and lives for around five years.

The fish’s body is silvery to greenish-gold in color, and its bright, iridescent red nose and black and white striped tail fin are the species’ most distinguishing features.

Male and female Rummy Nose tetras look much the same, except that the male is thinner than the female. Females are generally more compact in shape and have a larger belly when in breeding condition.

These tetras are easy to look after once you have their preferred water chemistry correct in your aquarium. For that reason, we don’t recommend the Rummy Nose as a suitable choice of fish for a complete beginner, and the fish are best added to a tank that’s already established.

This species of tetra is especially sensitive to change in water conditions, so you must be diligent in carrying out 25% to 50% water changes every week, as well as testing the water to make sure that the parameters are correct.

The Rummy Nose tetra is a schooling fish that’s happiest when it lives in a group of seven or more individuals in an aquarium of at least 15 to 20 gallons.

This species swims in all areas of the tank, so you can use a long tank or a taller, deep one if you prefer. A nano tank or bioOrb can also be used, provided that it’s large enough for a group of these active, sociable fish.

These fish must have water that is soft and acidic if they are to thrive. These tetras are a freshwater species that cannot tolerate brackish conditions.

It’s advisable to replicate the tetras’ natural environment as closely as possible by using peat filtration. These fish tend to fare better when they are introduced to an established tank, where the water chemistry is already stable.

You’ll need a high-quality filtration system too to keep the acidic water chemistry regulated and stable. Undergravel filtration works well in a tetra Hemigrammus tank, helping to keep the water well-oxygenated and filtering away any fish waste and other debris that finds its way down into the substrate.

The water temperature in the aquarium should be between maintained between 72o and 82o Fahrenheit, with a pH range of between 5.5 and 6.8, and a hardness range of 2 to 8 dGH

These fish come from habitats where the lighting is diffused by dense forest cover. You can replicate that by using dim lighting in the aquarium or providing shade with floating plants that the fish will also use as a hiding place.

Tetras prefer to live in a well-planted tank that has plenty of open space for swimming. The substrate should ideally be made from river sand, and adding a handful of dried leaves can give the setup a natural feel and look that the fish will appreciate. Remember to remove the leaves every few weeks or so and replace them with fresh ones.

Include some driftwood and floating plants to provide hiding places that will help to make the tetras feel comfortable and prevent them from becoming stressed.

Rummy Nose tetras are omnivores. They will eat any kind of flake, pellet, fresh, and live foods, including bloodworms and brine shrimp. It’s important to remember that tetras have tiny mouths, so make sure that every food that you offer your fish is small enough to fit into their mouths.

The fish’s daily diet should include high-quality flakes with some frozen or live food as a treat every other day or so. Feed your fish several times each day, offering just enough for them to consume within a few minutes.

Rummy Nose tetras are a peaceful species that does well in a community tank setup. These fish are happiest in shoals of seven to ten individuals. Also, a school of these active, brightly colored fish really makes your aquarium shine!

Good tankmates for these pretty little fishes include peaceful bottom-dwellers, such as Corydoras catfish and loaches. Small species of rasboras, tetras, some dwarf cichlids, gouramis, and peaceful barbs also make suitable fishy friends for the Rummy Nose tetra. Invertebrates, such as shrimps and snails, will be fine.

Species to avoid are any large, aggressive types that might harass and chase the tetras. Also, large carnivores may view the tetras as a food source and should, therefore, not be housed in the same tank.

Rummy Nose tetras are egg layers. The species is more difficult to breed than other tetras, and they require very specific tank conditions in which to spawn. It’s best to set up a separate spawning tank when attempting to breed these fish, as that ensures the best number of surviving fry.

The spawning tank needs to be 10 gallons or more.

These fish spawn on the substrate or on plant leaves, so include some Java Moss or clumps of spawning moss on which the eggs can be laid. You can also fit a layer of mesh across the bottom of the tank so that the eggs can pass through, but the parents remain excluded.

Both the eggs and the fry are highly light-sensitive, so the lighting in the spawning tank should be kept dim.

In the breeding tank, the water needs to be slightly acidic and soft. Rummy Nose tetras are classed as “blackwater fish.” So, you’ll need to use a small, air-powered sponge filter system with aquarium-safe peat filtration for the best results in the spawning tank environment.

The most successful way to breed Rummy Nose tetras is to place a mixed-sex group in the spawning tank. The ideal ratio for the group is six males and six females. Before breeding, separate the sexes into separate tanks and feed them a rich diet of live and frozen foods.

Transfer the breeding groups into your spawning tank in the evening. When the females are ready to spawn, they appear rounded and fat thanks to a cargo of eggs. Pick male fish that are the most brightly colored.

Spawning usually takes place in the morning. As soon as the spawning process is complete, remove the parents to prevent them from eating the eggs.

The eggs hatch after about 24 to 36 hours, and the fry will appear free-swimming within a few days once they’ve exhausted the food supply that is provided by their egg sacs. You’ll need to provide infusoria or other tiny foods for the first few days until the fry are large enough to eat brine shrimp nauplii or micro-worms.

Rummy Nose tetras are generally disease resistant provided that they are given their preferred water conditions. If the water is not soft and acidic, Ich is often a problem for the species.

Ich is common to most freshwater fish species, both in the wild environment in aquariums.

The condition is also known as White Spot disease and is caused by the protozoan parasite, Ichthyophthirius multifiliis. Ich is seen in tropical and cold water tanks, and there’s a similar condition that affects marine and reef setups too.

Ich doesn’t usually cause a problem until a fish becomes weakened by stress, poor water conditions, and inadequate or poor diet.

The parasite attaches itself to the fish’s gills, fins, and body, where it shows up as a sprinkling of tiny white spots, hence the disease’s common name. Fish that are infected with Ich flick themselves against solid objects in the tank or rub themselves against the substrate. As the disease progresses, you’ll notice that the fish’s respiration rate increases, and their fins remain clamped against their bodies.

Eventually, if the condition is left untreated, the parasites clog the fish’s gills, and it suffocates.

Ich can be successfully treated by raising the water temperature in the tank to 86o Fahrenheit for three days, while simultaneously treating the water with a White Spot treatment product that can be bought over-the-counter in good fish stores.

Ideally, you want to prevent outbreaks of disease in your aquarium rather than having to deal with problems. Be sure to check the water quality each week to make sure that it is still within the required parameters for this species, and be diligent with partial water changes and general maintenance and cleaning tasks.

Before introducing any new fish to your setup, you should place them in a quarantine tank for at least 14 days. Items of tank decoration, including new substrate and plants, should be washed thoroughly to remove bacteria and dirt before you add them to your tank.

These fish generally cost only a few dollars, and you can often by a group of fish for a discounted price. Remember that if you choose to buy tetra Hemigrammus online, you won’t be able to see the fish until they arrive, and you will also incur shipping costs.

The Rummy Nose tetra is a peaceful, lively fish that’s perfect for a large community aquarium that will accommodate a school of these fish. Alternatively, these tetras can be housed in a species-only nano tank. Firehead tetras are omnivorous and will eat pretty much anything, making them easy to cater for in a mixed species tank.

If you have the right facilities and you fancy taking on a project, you could have a go at breeding from your collection of Rummy Noses.

To keep the species healthy, you’ll need to maintain the water parameters exactly to their liking, especially the water hardness. For that reason, we don’t recommend the Rummy Nose tetra to complete beginner aquarists.