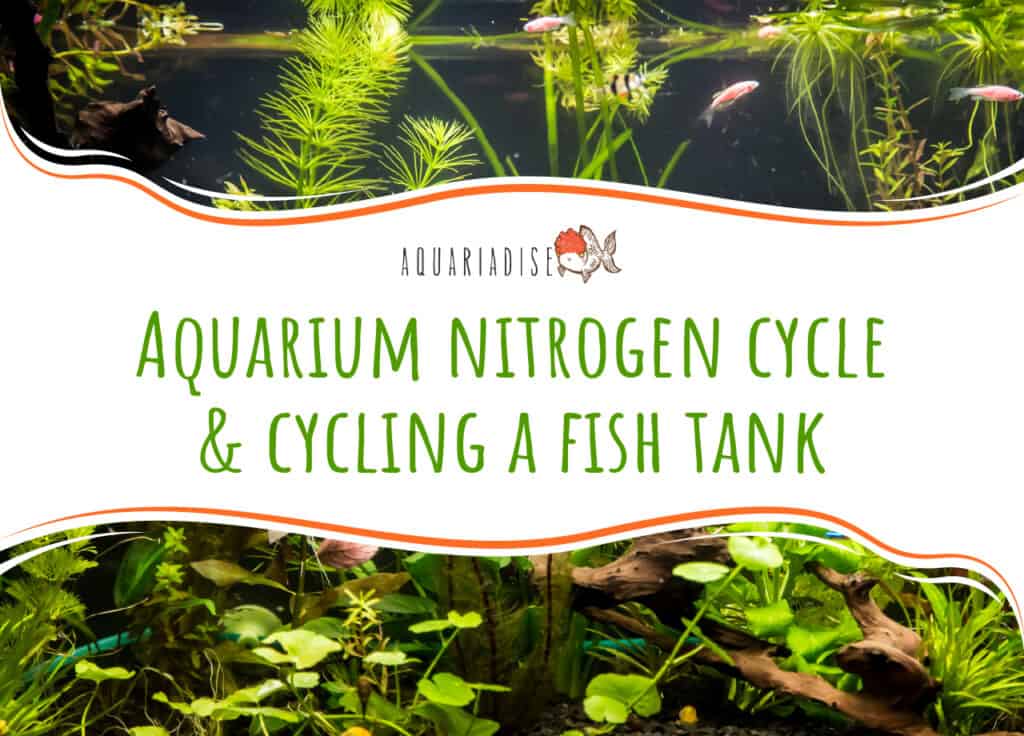 Immediately after setting up your aquarium, it can be very tempting to head to the pet store and buy a bunch of fish. Unfortunately, you’ll often find your new aquarium inhabitants upside down within a week if you do this.

It can be very demotivating to find your new tank full of dead fish, but fortunately, these unnecessary deaths can easily be prevented by properly cycling your fish tank.

Keep reading to find out everything you need to know about the nitrogen cycle, cycling your aquarium, and how you know your tank is ready for fish!

All new aquariums go through a stage where they are a toxic and extremely dangerous closed environment for any live animal.

Aquariums are in this toxic stage for about one to two months after being set up. There are little to no populations of beneficial types of bacteria to convert toxic compounds from ammonia to nitrite to nitrate during this time.

As we’ll discuss, toxic ammonia and nitrite are directly harmful to fish and invertebrates and unsustainable for most aquatic life. Even nitrate, usually non-toxic to freshwater fish, can become dangerous at higher toxic levels.

To prevent fish from suffering through high ammonia and nitrite levels, hobbyists need to let their aquariums cycle and let bacterial colonies form on their own to keep the water safe.

To understand when your aquarium is ready to add a load of fish and what you should do if you’ve already introduced them, it’s essential to know the nitrogen cycle first.

The nitrogen cycle is necessary for the success of both freshwater and saltwater aquariums. This process converts the nitrogenous compounds in ammonia into nitrite and then into nitrate.

In the aquarium keeping hobby, the phrase “nitrogen cycle” usually describes the first 4-6 weeks of a tank’s life when water parameters are settling.

In actuality, the nitrogen cycle is always happening in the aquarium environment and facilitates safe water parameters for fish, invertebrates, and plants. The actual cycling of an aquarium system refers to when the necessary bacteria population is established in the beginning stages.

The nitrogen cycle can be described in two main steps: nitrification and denitrification.

The nitrogen cycle and the growth of beneficial bacteria are triggered by the presence of ammonia (NH3) and ammonium (NH4). This occurs naturally as fish live, eat, expel harmful waste, and die, but sometimes it requires human intervention to get started.

You can also introduce an ammonia source into the aquarium water through fish waste product, leftover food, dead plants, and other organic matter breaking down. Ammonia cannot be avoided and needs to be processed by a special nitrogen-fixing bacteria called Nitrosomonas.

Chemically, these bacteria convert ammonia (NH3) and ammonium (NH4) into nitrite (NO2).

Ammonia is very toxic to all aquarium inhabitants and will cause gills and internal organs to burn. Thus, You should always keep the detectable levels of ammonia at 0 ppm if any fish are present in the tank.

Once ammonia has been introduced and begins to increase, Nitrosomonas populations will also increase. You can observe this in the rise and fall of aquarium ammonia levels as bacteria start their natural process.

Thanks to Nitrosomonas, denitrification will begin once nitrite is present in the water column.

Denitrification is the conversion of nitrite (NO2) to nitrate (NO3) by another type of bacteria, Nitrobacter.

This process will start shortly after ammonia levels rise but can take longer in a larger-sized aquarium. During this time, the ammonia and nitrite levels will decrease, with ammonia beginning to read at 0 ppm consistently and nitrite slowly waning.

It can be tempting to add aquarium fish during this time, but an influx of additional amounts of ammonia can cause another cycle process to start as the population of bacteria is not fully established yet. Also, remember that nitrite can be just as harmful as ammonia to healthy fish and invertebrates.

Once nitrite reaches 0 ppm, and only nitrates are observable in the system, the tank is considered cycled.

Nitrification and denitrifcation in the aquarium

From start to finish, an aquarium cycle will look like this:

Nitrates will stay in the aquarium unless a partial water change is performed; it is recommended to exchange 75%-100% of the water after a cycle has been completed to reduce the nitrate reading below 20-30 ppm and get the tank going in the right direction.

This will not undo the cycling process as the bacteria live on surfaces and not in the water column; however, sometimes bacteria become free-swimming which can be seen in cloudy tanks experiencing a bacteria bloom.

At this point, you may safely introduce fish and invertebrates into the aquarium. Make sure to add livestock slowly to prevent a mini cycle from happening again.

Plants in the aquarium

Though fish and invertebrates can’t be present during a tank cycle, aquarium plants actually can. In fact, underwater plant life can help lower ammonia and nitrite levels so much that you might get something known as a ‘silent cycle.’

Plants use ammonia, ammonium, nitrite, and nitrate to grow. If you add enough plants during the cycling process, they may use nutrients so fast that you do not get to see your ammonia or nitrite levels rise or fall dramatically.

This can be pretty confusing to see, and you might wonder why your tank isn’t cycling. You will still need to trace the conversion of ammonia to nitrate with an ammonia test kit to guarantee the tank is fully cycled.

This method can be tricky because it’s nearly invisible and extreme and swinging parameters can hurt plants. For the most part, average aquarium plants will be able to withstand higher nutrient levels, but more sensitive ones might melt away.

Some expert hobbyists have been able to cycle a densely planted aquarium with hardy fish species this way, though it’s not the recommended method for most.

How to cycle an aquarium

There are several ways to cycle an aquarium; most involve introducing ammonia into the tank to trigger the growth of bacteria colonies.

You will need an aquarium test kit, either for a saltwater or freshwater fish tank, depending on your setup, to successfully cycle an aquarium. While local aquarium stores may offer free testing, they usually use paper strips, which are wildly inaccurate.

You will need liquid testers for pH, ammonia, nitrite, and nitrate levels for the best results. This way, you will see the levels rise and fall across the following weeks.

A liquid tester like the API Freshwater Master Test Kit is much more accurate than test strips and cheaper in the long run as it can last you many years.

This traditional method is the oldest and most common way to cycle an aquarium is to cycle with fish. This means putting some cheap fish into the tank, so ammonia is introduced and starts the cycle.

Pet stores often recommend this method because it means extra profit for them when fish die. But, cycling an aquarium this way actually takes longer, requires regular water changes to keep the fish healthy and alive, and usually permanently damages or kills the fish involved.

In no way, shape or form is this method recommended, though more advanced hobbyists can sometimes keep up with the water changes needed, especially if the tank is densely planted.

Luckily, there are plenty of cruelty-free options and easier alternatives to cycle an aquarium.

As mentioned earlier, uneaten food is broken down into ammonia, which is needed to start an aquarium cycle.

A large, uncooked shrimp or fish food can be added to the tank and left to decay until the tank is well into the cycle.

This fishless method is not entirely risk-free because rotting, uneaten fish food often attracts unwanted bacteria and dirties the tank water. The smell can also become obnoxious after a few days.

Because of this, a significant (90-100%) water change should always be done before introducing fish to a tank cycled this way.

Though not the cleanest method of cycling an aquarium, cycling with food is one of the most tried and true methods. Just make sure that there is always a constant source of ammonia being introduced into the system so that bacteria continue growing.

Pure household ammonia is sold in garden stores and some supermarkets as a cleaning product. This is one of the cleanest and most accurate ways to cycle an aquarium.

Ammonia is also sold in smaller containers by several brands such as this one, specifically for aquarium use. Add about five drops of ammonia per ten gallons of water.

There are different dosing methods, but ideally, the preferred method is to add just enough ammonia so that the bacteria continue growing. It is possible to overdose ammonia, which can stall a cycle.

Once you start to see nitrates appear, it’s time to stop dosing. Allow ammonia to hit 0 ppm and perform a significant water change.

At this point, you may add fish. However, if you plan on delaying adding livestock for any reason, you will need to continue dosing the tank with ammonia to keep the bacteria from starving.

Using cycled filter media that already has the correct beneficial bacteria colonies from another tank can quick-start the nitrification process in your aquarium.

This way, you can add fish instantly, but you do run the risk of introducing diseases or pests from the ‘donor’ tank into the new one and starting a mini cycle. This method is very popular due to its near-instant results.

If you don’t own a cycled aquarium, you can ask friends who own an established tank or pet or aquarium stores. They might be able to supply you with some seeding material, though this dramatically increases the risk of introducing harmful bacteria and parasites.

Use the media as soon as possible. It should be transported in water from the tank it was in and should never sit for more than one hour before being put in the new tank’s primary filtration.

If the filter media is exposed to oxygen for too long or left in stagnant water, the beneficial bacteria will start to die and begin another cycle.

If you need to let the used media sit for a longer time for whatever reason, put an air stone into the bucket to provide the beneficial bacteria with oxygen and flowing water to prevent them from dying.

The next best option for quickly cycling a tank would be to use bottled bacteria. In essence, the necessary bacteria needed to cycle an aquarium can be purchased in bottle form from your local fish or pet store.

It is recommended to always check the expiration date on these products as they can usually only be stored for about a year and keep them in a cool, dark place like the fridge (not the freezer!).

However, don’t assume you can add fish right away: these products are best used as a ‘kickstart’ for your cycle, so the nitrogen cycle process doesn’t take as long. They do work, though, especially when combined with a high-quality water conditioner like Seachem Prime to remove traces of ammonia and nitrite.

Simply follow the instructions on the label, and you will have a greatly accelerated healthy nitrogen cycle for your aquarium!

Cycling your aquarium before adding any fish is one of the most important steps to achieving a healthy little ecosystem, and it’s one you should never skip.

The ammonia and nitrite spikes that result from failing to cycle an aquarium properly can cause fish death and weeks or months of trouble, constant water changes, having to buy expensive products, and can completely ruin the aquarium hobby for you.

If you have any more questions about cycling an aquarium or something to add to this article, be sure to leave a comment below!