Green Neon Tetra: Guide To Caring For The Peaceful Fish 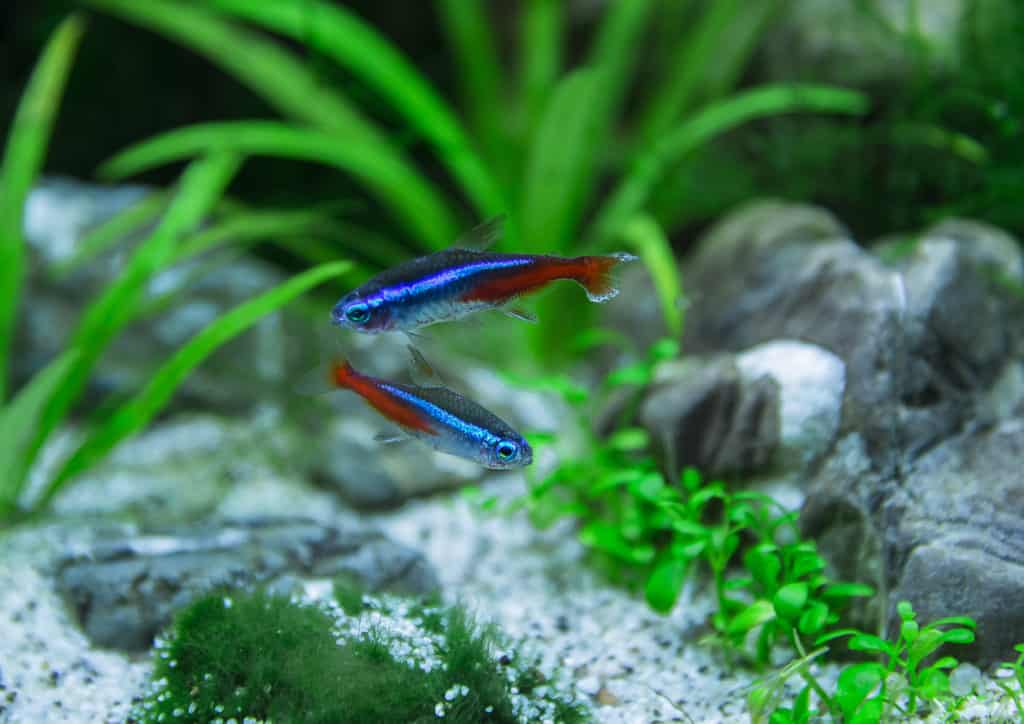 If you’re looking for a small fish that can add a splash of metallic sparkle to your community tank, the Green Neon tetra might be a species worth considering.

Most hobbyists are familiar with the Neon tetra and Cardinal tetra, but the Green Neon tetra is often overlooked. However, these little aquatic gems are just as beautiful as their cousins, and they can make an inexpensive and readily available alternative.

In this guide, we show you how to care for the Green Neon tetra, including how to breed your own specimens in a home breeding tank.

The Green Neon tetra is also known by its scientific name, Paracheirodon simulans and its common name, the False Neon tetra.

These pretty little fish come from South America, specifically the middle-to-upper Rio Negro drainage in Brazil, upstream of the mouth of the Rio Branco, as well as in the Rio Orinoco system of the border region of Colombia and Brazil between the mouth of the Río Meta and San Fernando de Atabapo.

Green Neon tetras live in blackwater environments where the water is slow-flowing over a sandy substrate. Thick vegetation overhangs the water, and the habitat is cluttered with fallen branches, leaf litter, and tree roots. The water here is acidic and is generally stained brown because of the decomposing organic matter that it contains.

Paracheirodon simulans, like other Neons, are most well-known for their brilliant metallic coloration.

The Green Neon’s base color is grayish silver, ornamented with a startling, metallic turquoise stripe that runs laterally on both sides of the fish’s body. Red and green coloration highlights the head, ventral region, and caudal fin.

The fish’s body is sleek and torpedo-shaped, much like that of a Neon tetra.

Sometimes, you may find Green Neons marketed as a novelty variant with a scattering of golden scales. However, that coloration is actually caused by a parasite, and it isn’t the fish’s natural, normal color. Needless to say, you don’t want to add one of those fish to your collection, as you may be bringing in a disease that could wipe out your whole collection.

The intensity of the Green Neon’s color is heavily influenced by the ambient lighting conditions in its environment, as well as being in close proximity to its own species. So, a shoal of Green Neon tetras is more likely to appear vibrant and brightly colored than a single fish all on its lonesome.

If you want to breed any species of fish, you’ll need to know whether you have a good mix of both sexes.

In general, Neon tetra Paracheirodon simulans show the same coloration, and both males and females are a pretty close match in appearance. However, the most reliable indicator of gender in these fish is their relative size. Males are a little smaller than females, and the female fish tend to have a rounder, more bulbous appearance, especially during the spawning season when they are swollen with eggs.

Green Neon tetras are pretty straightforward to look after and will thrive if given the right conditions.

The first thing to understand about housing Green Neons is that they should not be kept in a tank of fewer than 20 gallons. Just because the fish are small, doesn’t mean that they will be happy in a small tank.

The reason for that is that these are shoaling fish, so you will need to keep at least six individuals. As a general rule of thumb, you need one gallon of water per inch of fish, so the more fish you have, the larger the aquarium you will need.

It’s very important that you keep the water parameters consistent in a tank containing Green Neon tetras. Although the species is quite hardy, they will suffer health problems if they experience too much shift in water conditions.

Paracheirodon simulans are tropical freshwater fish that need a water temperature of between 75° to 85° Fahrenheit. pH levels should be between 5 and 6.5, and water hardness should ideally be very soft.

To maintain the water quality, you’ll need to carry out partial water changes of 25% each week. Also, be sure to test the water parameters regularly with a strip testing kit.

As mentioned above, the water flow in the Green Neon’s natural environment is slow to moderate. So, be sure to adjust your filter pump so that the fish are not buffeted around by a strong current that could stress them. If necessary, you can use planting or decorations to buffer the flow.

When setting up the tank, you should try to replicate the natural habitat of the species you intend to keep. In the case of the Green Neon tetra, that means including a sandy substrate, plenty of lush planting, and lots of ornaments, such as driftwood and rocks.

The fish can feel vulnerable, especially if you have larger species in the tank, and they appreciate plenty of places where they can seek shelter. As with any fish, the more content and secure the tetras are, the less likely they will be to succumb to stress-related diseases.

The Green Neon tetra is an omnivore. In South America in the fish’s natural environment, Paracheirodon simulans feed on tiny crustaceans, insects, zooplankton, and organic matter. To keep your fish happy and healthy, you’ll need to try to replicate that diet as closely as possible in the tank environment.

Green Neons will happily feed on flakes or freeze-dried foods, provided that you crush the food up into small particles that the fish can eat. To enrich and vary the tetra’s diet, we suggest that you feed live and frozen daphnia, mosquito larvae, and bloodworms. That food is protein-rich and also helps to add variety and interest to your fish’s feeding regimen.

Green Neon tetra Paracheirodon is quite a greedy species, so you must be careful not to overfeed them. Feed your fish twice daily, offering them just enough food that they clear it within a couple of minutes.

The Green Neon tetra is a peaceful, schooling fish that is happy to mind its own business, inhabiting the middle of the water column and flitting in and out of the plants and ornaments in the aquarium.

If you want to keep a mixed community tank, the Green Neon is a perfect choice. To avoid potentially stressing your fish, choose other peaceful species that are not too large. Ideally, fish species that primarily inhabit the bottom or top area of the tank are the best option, as that means that the tetra’s preferred mid-water area won’t become overcrowded.

Of course, you could opt for a species only setup. These active, beautiful fish can easily be the star of the show in any aquarium when given a natural-looking background. Not only does a big shoal of sparkling Green Neons look stunning, but you’ll also be sure of having a good mix of boys and girls, which is perfect if you’re hoping to breed from your fish.

Alternatively, you might want to have a tetra tank, populated by Neon tetras, Green Neon tetras, and the Cardinal tetra too. These fish will most likely school together, creating a glorious display of shimmering firework colors.

Although you can breed Paracheirodon simulans in an aquarium environment, you’ll need to be patient and ensure that the tank conditions are absolutely right to be successful.

We recommend setting up a breeding tank, as Green Neon tetra eggs are almost sure to be eaten by any other fish and invertebrates in the tank before they have a chance to hatch.

Often, increasing the water temperature slightly and lowering the pH levels can go some way toward replicating the water conditions that the fish would experience during their natural spawning season in the wild. Reducing the light levels in the tank by half can help to trigger spawning behavior too.

Tetras are egg spreaders. The female and male fish swim close to each other, frequently making contact until the female eventually spreads a blanket of eggs in various parts of the tank. The male follows the female closely, waiting the fertilize the eggs as soon as they are laid.

Once the eggs have been fertilized, you should remove the parents from the tank. Paracheirodon simulans take no further part in raising their young, and, if left in the tank, will probably eat the eggs and any fry that hatch.

The fry hatch after a week or so, remaining attached to the egg sacs until they have extracted all the available nutrition from the egg. When the fry become free-swimming, you’ll need to feed them.

It’s best to begin feeding the tiny fry with infusoria for their first week or so until they are large enough to cope with commercially made fry food or baby brine shrimp that you can buy from fish stores. You can “breed” infusoria by placing a lettuce leaf in the tank. Within a few hours, infusoria will appear and enter the water where the fry can feed on them. Replace the leaf with a fresh one after a week.

The best way to keep your fish protected from attack by parasites is by keeping the water parameters consistent and correct for the species, carrying out weekly partial water changes, and by feeding your fish a high-quality diet.

Whenever you buy new fish, you must always place them in a quarantine tank for at least two weeks before adding them to your existing community. During that time, keep a close watch on the fish to see if they show any signs of disease or failure to thrive. If anything untoward manifests itself, you will have a chance to treat the newcomers and return them to full health before you add them to your main tank.

The same principle applies to new plants and tank decorations. Be sure to wash new plants thoroughly to get rid of unwanted snails and parasites that might be hiding among the leaves, and rinse the plants with an aquarium antibacterial product that you’ll find in most good fish stores.

Ich is a very common disease in freshwater and marine fish that’s caused by the parasite, Ichthyophthirius multifiliis.

The parasite is often present in most aquariums, although it doesn’t affect the fish until their immune systems become weakened by disease or stress. Ich is also commonly called White Spot Disease, largely because of the tiny white spots that appear all over the fish’s skin, gills, fins, and tail as the parasite’s lifecycle progresses.

The Ich parasite causes irritation to the fish, causing the tetra to flick or rub its body against tank decor, plants, and the substrate. If left untreated, the disease progresses and spreads until the victim’s gills become compromised by huge numbers of parasites. Ultimately, the fish suffocates.

Luckily, Ich is easily treated by raising the water temperature in the aquarium to 82° Fahrenheit and treating the water with a proprietary medication that you can buy at fish stores or online. It’s important that you treat the whole tank so that you can be sure of killing any parasites that are free-swimming in the water.

Once the parasites have been eradicated, check the water parameters, and carry out a partial water change of up to 50 percent.

The Green Neon tetra is usually readily available from good fish stores or online. The fish are inexpensive to buy, usually costing less than a dollar per fish, and they are often sold at a discounted rate if you buy a small group of specimens.