Cardinal Tetras: Your Guide to These Beautiful Tropical Fish 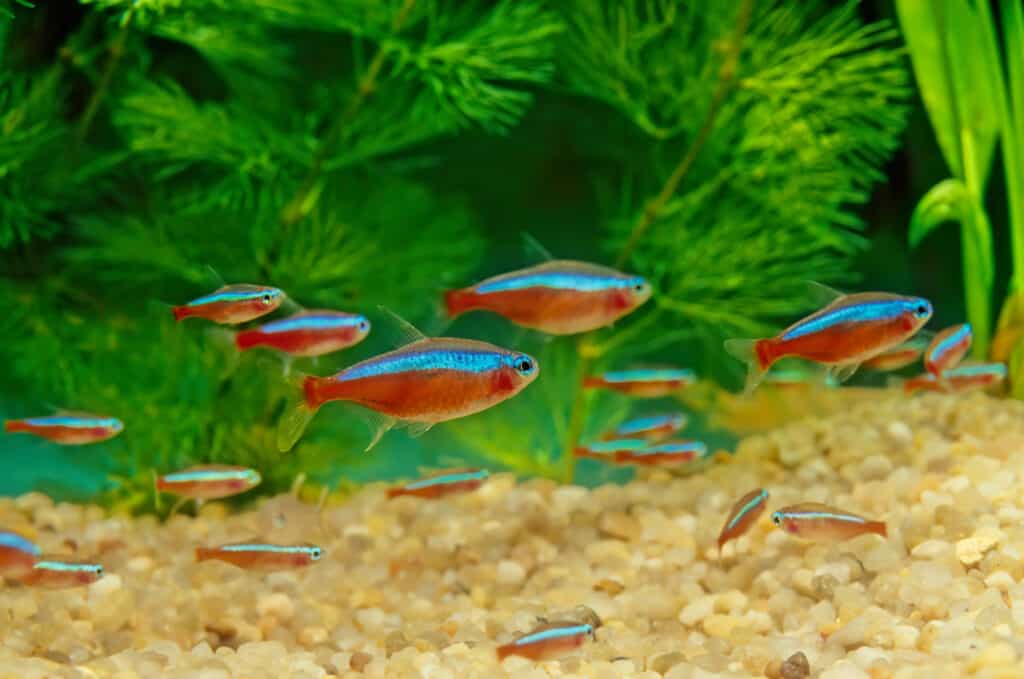 You need to read this guide if you’re wondering whether Cardinal tetras would make a good addition to your community aquarium!

Cardinal tetras come from the Negro and Orinoco River drainages in South America, extending across Colombia, Brazil, and Venezuela.

The fish inhabit blackwater tributaries and creeks, where the tea-colored water is acidic and soft. Here, the fish are prolific in numbers, so most of the Cardinal tetras you find in the trade are wild-caught.

How Large Do Cardinal Tetras Grow?

How Long Do Cardinal Tetras Live?

In the wild, Cardinal tetras only live for about a year.

However, a well-cared-for Cardinal can survive between four and five years or even longer. In ideal conditions and when fed a correct, high-quality diet, it’s not unheard of for Cardinal tetras to reach 10 years of age.

You’ll find Cardinal tetras for sale in pretty much any fish or pet store worldwide. The fish are relatively inexpensive, costing between $3 and $5. You can usually get a small discount if you buy a small school of Cardinals.

Cardinal tetras are small fish with the same characteristic spindle shape as other tetra species. The fish is named for its brilliant red color and the iridescent neon blue stripe extending from its nose to its tail. The fish has translucent fins and a blunt nose.

The fish’s color varies depending on the light conditions. The Cardinal tetra’s vibrant colors fade at night and when resting. However, if the fish’s colors are muted during daytime hours, that can be a sign of sickness or stress.

You can also find several variants of the Cardinal tetra, including albino and gold.

The Albino Cardinal tetra has a white, almost transparent body, although some retain the red stripe. Gold Cardinals have an opalescent body with a more muted color than regular Cardinals.

Although Cardinal tetras look very similar to Neons at first glance, the Cardinals have more red coloration, and their blue stripe is brighter and more vibrant than the Neon tetra.

Cardinal tetras are peaceful schooling fish that are active throughout the daytime.

These fish are fast, agile swimmers that spend most of their time schooling in the middle and upper regions of the aquarium, exploring dense plants and caves.

Cardinal tetras are most at home when schooling in groups of at least six. Although rarely aggressive, these fish might become slightly territorial when spawning.

Cardinal tetras show their best colors, live longer, and thrive when given the ideal environment and care. Here’s what you need to know to make your tetras really pop!

Cardinal tetras should not be kept in newly cycled, immature tanks since these fish are very sensitive to water quality.

Although these tetras are small fish, they need to live in schools. You need an aquarium of at least 20 gallons for a group of six Cardinals.

Add two gallons for every added fish you want to keep.

The tank should be rectangular, so the fish have plenty of swimming space. We recommend a tank with a lid or cover slide, as these active little fish can jump when startled.

In the natural environment, Cardinal tetras live in blackwater where the tannins from rotting fallen branches and leaf litter stain the acidic water. The waters are shaded and dimmed by the overarching forest canopy.

In captivity, the Cardinal tetra does best if you replicate that environment with dim lighting, soft water, and leaf litter scattered across the substrate. A dark, sandy substrate works well to show off the Cardinals’ bright colors. Add roots, driftwood, and leaf litter to make the fishes’ colors really shine!

Add plenty of dense planting so that the fish feel secure and safe. Floating plants work well to provide shade and keep the environment dark.

Caves and rocky overhangs also work well, giving the fish somewhere to explore and hide from larger tank mates when they want to.

Your filtration system should be efficient but not too powerful since the flow in the tetras’ wild environment is slow. A bubbler is not necessary as these fish can live happily in water where oxygen levels are low.

Cardinal tetras become stressed if exposed to harsh lighting, which will ruin the fishes’ bright colors.

Cardinal tetras can be affected by many common freshwater fish diseases, including:

However, Cardinals are especially prone to Neon tetra disease.

Neon tetra disease is deadly to fish and is caused by a parasite called Pleistophora hyphessobryconis. The disease is caused when the fish ingests infected dead fish or live foods that harbor the parasite.

This rapidly spreading disease can quickly spread throughout your whole tank, causing the following symptoms:

There is no cure for Neon tetra disease. So, if you suspect an outbreak, you must immediately put infected fish into a quarantine tank to prevent the spread of the disease throughout the tank.

When buying new fish, always quarantine them for two weeks before adding them to your main display tank.

Cardinal tetras do best when kept in large schools of their own kind. However, you can add shoals of these beautiful fish to community tanks with other peaceful fish of a similar size.

Suitable tank mates for the Cardinal tetra include:

Avoid housing Cardinal tetras with large carnivorous fish that might attempt to eat them, such as cichlids and angelfish. Unfortunately, Cardinal tetras are fin nippers, so you can’t keep them with long-finned fish, such as bettas.

Cardinal tetras are omnivorous fish that feed on small crustaceans, worms, and plant matter in their wild habitat.

In captivity, you can feed the fish a diet including flakes, pellets, fresh blanched veggies, such as broccoli, cucumber, and peas, and frozen foods, including mosquito larvae, bloodworms, and daphnia.

Although live foods improve the fish’s color, live food also carries the danger of introducing disease and parasites to the tank. Therefore, we recommend that you instead feed your fish frozen meaty foods.

Flake foods are an excellent staple diet for the tetras since they contain the added vitamins and minerals that the fish need for optimum health.

Feed your Cardinal tetras two to four times daily. The food should be an appropriate size. Give your fish an amount they can eat within three minutes to prevent overfeeding and its associated health and water quality problems.

Unfortunately, breeding Cardinal tetras in your home tank is extremely challenging. However, breeding these beautiful fish is not impossible if you set up a separating spawning tank.

Cardinal tetras can be quite picky when choosing mating partners. So, you might need to persevere with different combinations of fish until you find a compatible breeding pair.

The separate breeding tank should replicate the fish’s natural habitat as closely as possible. Ensure the water is rich in tannins by scattering leaf litter across the substrate; Indian almond leaves are the perfect medium for that.

Set up your spawning tank as follows:

Cardinal tetras are egg layers that need to be in optimum conditions for spawning. Feed your breeding pair carefully-sourced live foods and gradually increase the water temperature by a couple of degrees to trigger spawning.

As soon as you notice that the female tetra is plump and full of eggs, move the breeding pair to the spawning tank.

Spawning generally happens in the evening and can take a few hours. On average, female Cardinal tetras produce between 130 and 500 eggs. Once the female has finished laying her eggs, remove the parent fish from the tank to prevent them from eating them.

The eggs usually hatch within a day, the fry becoming free-swimming within four days. Initially, you can feed the fry on infusoria or liquid fry food. Once the babies are big enough, after a couple of weeks, you can move them onto baby brine shrimp.

In this part of our guide, we answer a few of the most frequently asked questions about Cardinal tetras.

Which Is Better, the Neon or the Cardinal Tetra?

Although the two species look very similar, the Neon tetra is easier to look after since it isn’t as fussy about water conditions as the Cardinal tetra.

That said, Cardinal tetras are larger and more brightly colored, providing a more vibrant display in your tank than Neons.

Are Cardinal Tetras Hard to Keep?

Cardinal tetras are quite prone to common fish diseases and are also very sensitive to water conditions. So, if you want to keep these beautiful fish, you must be very diligent with your tank maintenance and cleaning regimen.

Why Are Cardinal Tetras So Expensive?

Cardinal tetras are more expensive than many other small tropical fish species because they are almost exclusively wild-caught.

I hope you enjoyed our guide to the gorgeous Cardinal tetra. If you found the article helpful and interesting, please take a moment to share it!

Cardinal tetras are often mistaken for their smaller relative, the Neon tetra. Cardinals are brighter colored than Neons and are somewhat more challenging to care for. These little fish are highly sensitive to water conditions, but if you provide them with the perfect environment that replicates their natural habitat, you have an excellent chance of success!

Have you successfully bred Cardinal tetras at home? Tell us your story in the comments box below.