How To Prevent Dropsy Disease In Your Tank: Causes And Solutions 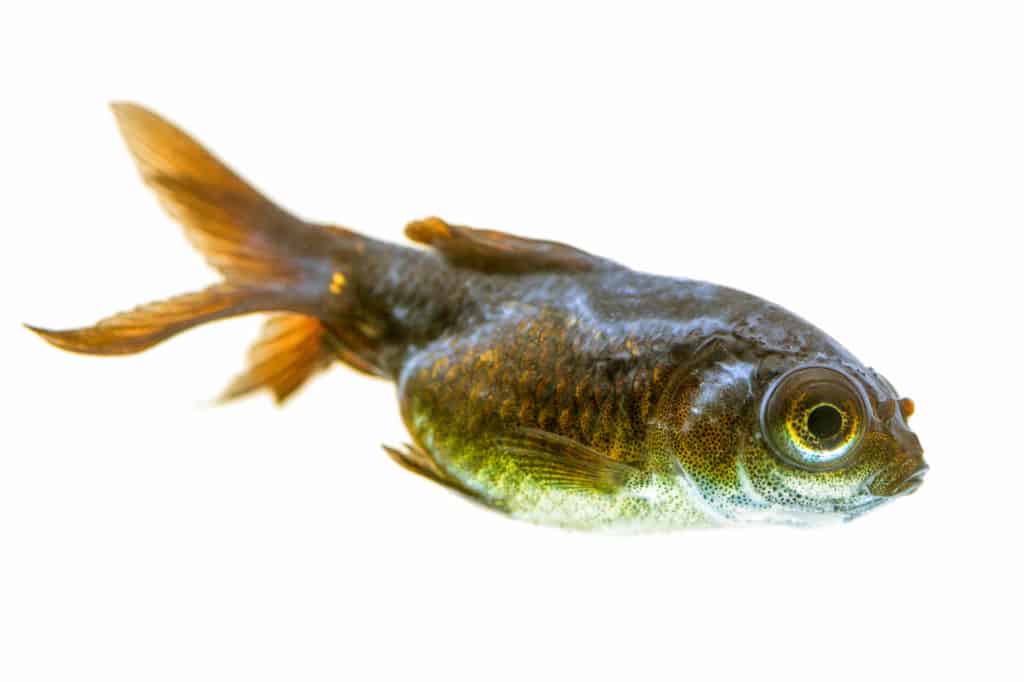 The term, “dropsy” is enough to strike fear into the hearts of all fish keepers. Dropsy is a common fish disease that can cause death within hours unless you spot the danger signs early enough to treat your fish.

Many myths and inaccuracies surround dropsy, so we’ve compiled this comprehensive guide to the condition, including some invaluable information on how to treat it.

Dropsy is an old term that was originally coined to describe a swelling in the body, usually in the abdomen. The correct term for dropsy is edema or ascites. The word, “dropsy” comes from an amalgamation of the old English word, “dropesie,” from the Greek for water, “hydropos,” and from the old French, “hydropose.”

Dropsy is not generally used to describe human conditions these days, but it is the common name for a certain health condition that’s seen in fish, including most tropical, coldwater, freshwater, and marine species.

In fish, dropsy refers to massive swelling of the fish’s stomach, resulting in the whole belly area “dropping” down. Dropsy is also known as bloat, Malawi bloat, and Pinecone disease.

Dropsy is not a disease in itself but rather a collection of symptoms that are usually triggered by a bacterial infection. The bacteria responsible are usually already present most aquariums but generally only attack fish that are stressed or weakened by some other disease.

Fish whose immune system is not properly functioning are susceptible to most common fish diseases and health conditions, including dropsy. It’s been reported by hobbyists that, if the whole fish community is highly stressed, for example, following a house move, every fish in the tank may become affected by dropsy. However, it’s more common for only one or two individuals to become sick.

So, what effect does dropsy have on your fish?

Well, affected fish may develop skin lesions. Simultaneously, the fish’s belly fills with fluid and begins to swell. The swelling causes catastrophic damage to the fish’s internal organs, especially the liver and kidneys. As a consequence, the fish develops anemia, and the gills become pale.

As the fish’s belly fills with fluid, the organs are pushed to one side, which usually causes a deformity of the animal’s spine. The abdominal swelling causes the fish’s scales to stand up from its body, giving the animal the appearance of a pinecone. Unfortunately, once the disease reaches this stage, the internal organs have been irreparably damaged, and dropsy fish rarely survive.

Sick fish affected by dropsy rarely survive, even with the prompt and correct treatment. That said, early diagnosis of the condition and effective treatment does at least give the fish a chance of survival.

One of the main issues for hobbyists when diagnosing early-stage dropsy is that the underlying bacterial infection causes many different symptoms.

Sometimes, a fish with dropsy shows no really obvious symptoms. Others display skin lesions or the classic swollen belly. However, most fish display a few or all of the common signs of the disease listed below:

Usually, the symptoms of the disease manifest themselves progressively as the condition worsens.

Constipation is often confused with dropsy, which can lead to confusion in diagnosing the condition.

In aquarium fish, constipation occurs when the fish are fed an incorrect diet. The fish’s digestive system slows down, the intestines become blocked by food, and the fish’s stomach swells. Sometimes, an affected fish will struggle to swim properly and will float up to the surface.

Constipation is easily cured by offering the fish a de-shelled pea or some live food, and then starving the animal for 24 hours. Mistakenly treating the fish for dropsy will make his condition worse, so always check to see if the fish is actually producing waste normally. If not, the problem is probably due to constipation rather than dropsy.

Dropsy is typically caused by a bacterium called Aeromonas, which is already present in your fish tank.

The bacteria only affects fish whose immune system is already compromised. The most common cause of a depressed immune system in fish is poor water quality. If the water quality in the fish tank is not maintained, ammonia, nitrate, and nitrate levels will be high, and the water will effectively become toxic to the fish.

Rapid changes in water temperature can also cause stress in some fish species, which in turn can compromise the fish’s immune system.

Other problems that can weaken fish to the point where the Aeromonas bacteria can cause issues may include stress from shipping, being hassled by aggressive tankmates, and being fed an incorrect diet.

For a fish to become sufficiently weakened for dropsy to strike, it must have been exposed to stress for a considerable period of time. That said, it could be the case that many stress factors have occurred simultaneously, combining to compromise the fish’s immune system.

How to treat dropsy in aquarium fish

Unfortunately, the Aeromonas bacterium is not easy to eradicate, and if the disease is too far gone, it’s incurable. However, if problems are spotted early enough, you may have a chance of saving your fish.

Start by isolating all affected fish in a quarantine tank.

Dose the isolation tank with one teaspoon of table salt per gallon of water. Don’t add too much salt, as that could harm freshwater fish.

Very mildly brackish water replicates the fish’s blood salinity, which in turn helps to maintain the osmotic balance within the fish. That encourages the removal of excess water from the fish’s body.

If the fish is still eating, offer high-quality frozen foods. You can try tempting the sick fish with live foods too, provided that you raise your own. Do not risk introducing bacteria into the quarantine tank by using live foods that you’ve bought in from an outside supplier.

Every day, check the water quality in the quarantine tank by using a strip test kit.

Make sure that the water parameters are suitable for the fish.

Carry out a partial water change every week, adding more salt to the water that you use to top up the tank.

Antibiotic treatments can be effective in the treatment of fish dropsy, provided that you use the correct product.

You’ll need to dose the water with a broad-spectrum drug that is designed to treat gram-negative bacteria. Maracyn-Two is a good place to start, and you can obtain the product online, from your vet or fish store. Treat the fish, using a ten-day course to be sure that the infection is completely eradicated.

Throughout the quarantine and treatment of the fish, observe him carefully for at least two weeks after the symptoms have done before you reintroduce the fish to your display aquarium.

Keep a close eye on the fish in your display tank for signs of dropsy, and remove any sick fish immediately.

How to prevent dropsy in fish

The best way to prevent health problems in your aquarium community is to keep the environment clean, hygienic, and correct for the species in your collection.

The primary trigger for an outbreak of any disease of aquarium fish is stress.

Dirty or polluted water is by far the most common cause of stress in aquarium fish. So, keeping your tank in an absolutely spotless condition is essential in the fight against bacterial and fungal diseases.

Test the water in your tank at least once every week. Keep a close eye on the levels of ammonia, nitrite, and nitrates in the water. Check the water pH and make sure that the water is the correct temperature for the fish.

Every week, use a gravel vacuum or siphon to remove detritus, uneaten food, and fish waste from the bottom of the tank, and change up to 30% of the water. Replace the dirty water with clean water that you’ve treated with a product that removes chemicals and chlorine.

If you have living plants in the tank, remove dying or dead leaves before they decompose and pollute the tank.

Remember to remove the filter media from your filtration unit and wash it in tank water. That will get rid of any sludge that could clog the filters and prevent the unit from working properly. Don’t rinse the filter media in tap water, as that would kill the beneficial bacteria that live inside the filter sponges.

If you keep tropical fish, get a tank thermometer if you don’t already have one, and ensure that your heater is working correctly and is set to the temperature that your fish require.

Some fish species are highly sensitive to water temperature and can be stressed by cold and hotspots within the environment. You can rule out that problem by placing your aquarium thermometer at the opposite end of the tank from the heater. Also, place your heater right next to the filter system. As the filter pumps out water around the tank, heat will be carried with it, ensuring that the aquarium is heated evenly throughout.

If you have too many fish in the tank, they may become stressed, especially if some of the fish are aggressive toward their tankmates or competition for food is too strong.

Also, an overstocked aquarium will place a strain on the filtration system, which could adversely affect the water quality in the tank.

So, how many fish can your tank accommodate?

The guideline for stocking an aquarium is one inch of water for one inch of fish. If you have invertebrates in the tank, you’ll need to account for them, too, as any living creature will produce waste and add to the burden on your filter system.

Overfeeding can predispose fish to constipation, which may be mistaken for dropsy.

If your fish’s diet consists entirely of flakes or pellets, that can result in a blockage in the intestines. You can prevent that from happening by feeding your fish with live or frozen food as a part of their regular diet. It’s also helpful to have one day each week when you don’t feed the fish at all. Fasting helps to keep the fish’s digestive system working properly and allows time for any undigested food to pass through before more is added.

Another good tactic is to feed your fish several small meals daily rather than giving the whole ration in one large serving. If that’s not possible because you go out to work all day, you might want to invest in an automatic fish feeder. Load the food hopper with your chosen fish food, set the timer for as many feeds as you want your fish to receive, and the job of feeding your fish is done for you.

Automatic feeders can be very useful, too, when you go away for a day or two.

Feeding your fish too much will result in uneaten food disappearing into the substrate and contaminating your tank, compromising the water quality, and making your filtration system work much harder.

Dropsy in fish is caused by Aeromonas bacteria, which causes serious damage to the fish’s internal organs. That leads to an accumulation of fluid in the fish’s abdominal cavity, which causes the trademark swollen belly that’s one of the most well-known symptoms of the disease.

Incidences of dropsy usually occur because the fish’s environment is unsanitary or highly stressful. The animal’s immune system becomes weakened, and the fish get sick.

So, be sure to keep up with your weekly water changes, check water parameters and temperature regularly, feed your fishy friends a correct, varied diet, and make sure that your aquarium is not overcrowded to help prevent outbreaks of diseases, including dreaded dropsy.