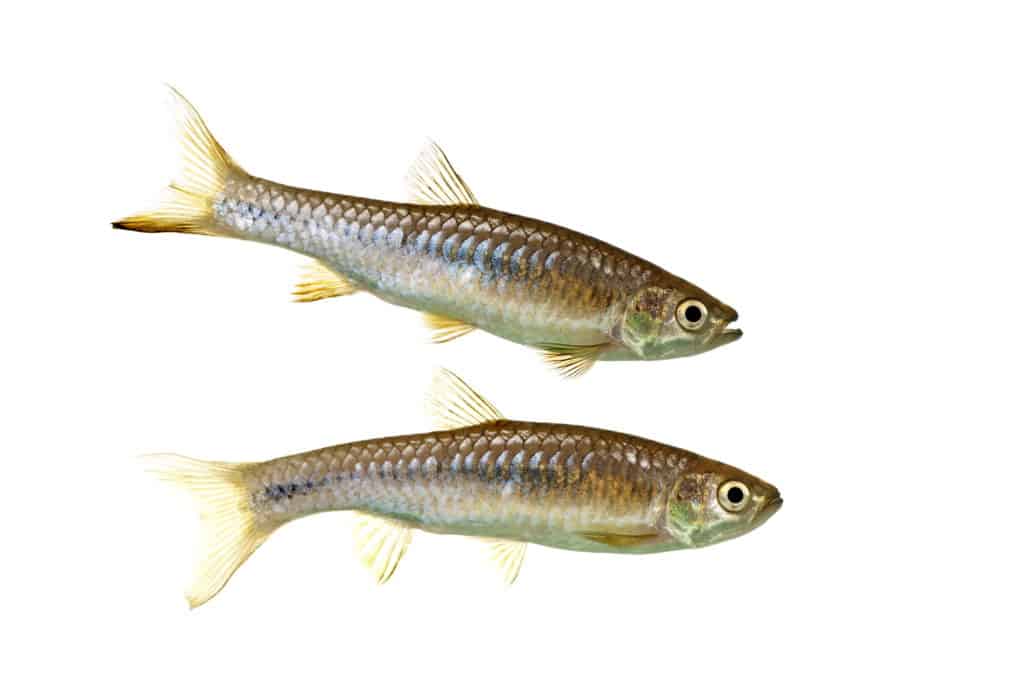 Rasbora species have quickly infiltrated the aquarium hobby and become some of the most popular fish due to their small size, peaceful demeanor, low aquarium care, and schooling behavior. Most species remain under 5 inches (12.7 cm) and can be housed with an assortment of fish, invertebrates, and plants. But which species of this colorful fish are best for your aquarium and what care will they need?

Keep reading to find out about our top four species of rasbora and the aquarium care that they require.

The rasbora genus contains nearly 100 different species, with many changes having been made as each fish is understood and studied better. As we’ll discuss later, Trigonostigma and Boraras are just two genera that have been reclassified.

These fish come from the minnow and carp family, Cyprinidae, and mostly come from the southern regions of Asia. They stay relatively small and tend to feature a distinguishable line or pattern on their body. Rasboras are schooling fish and will need to be kept in groups for them to display their natural behaviors and stay the healthiest that they can be.

These fish are some of the most popular rasboras available in the aquarium trade today, but they’re not even true rasboras! Harlequin rasboras were originally included in the Rasbora genus as Rasbora heteromorpha, but were later moved to the Trigonostigma genus due to differing colorings and reproductive behaviors.

The harlequin rasbora comes from Southeast Asia and can be found in Thailand, Malaysia, and Singapore. There, they are found in small freshwater rivers and streams with moderate water flow. The water is usually soft and acidic from submerged plant detritus and other vegetation that falls from the forest canopy above.

The scissortail rasbora, also known as the three-lined rasbora, is listed as a true member of the Rasbora genus for right now, however, their categorization is subject to change. These fish are native to the Mekong and Chao Phraya river basins across Thailand, Laos, and Cambodia, as well as parts of Indonesia and Malaysia. The scissortail rasbora is an extremely hardy fish and can be found in many different ecosystems, from clear fast-moving mountain streams to stagnant blackwaters filled with detritus.

These fish tend to be a little larger than most rasbora species and can grow up to 6 inches (15 cm) long. Scissortail rasboras are a light greyish tan color, and will have black and yellow mid-lateral lines that begin halfway down along their body with a varying degree in intensity. Their caudal fin is deeply forked and features alternating black and white stripes.

Possibly one of the most popular species of rasbora, the chili rasbora is also commonly known as the mosquito rasbora. Like harlequin rasboras, this species was separated into a more specific genus based on morphological differences. Their incredibly small size makes them a perfect fish for the nano aquarium!

Chili rasboras come from the freshwater swamps of southwestern Borneo in Indonesia, though natural populations are poorly documented. Here, the water is stained by tannins released from decaying plants and fallen branches. Because of this, the water is usually very soft and acidic.

These fish have vibrant red and black stripes down their mid-lateral line and orange-spotted fins. They are a popular nano aquarium species as they only grow to  0.6-0.8 inches (1.5-2.0 cm) and be kept with species of dwarf shrimp. Female fish will be larger and less colorful than males; male fish also tend to be more territorial in the aquarium.

These fish will need to be kept in groups of at least 8 with larger numbers being better, especially since they are so small! While some hobbyists say that these rasboras can be kept in a smaller tank, like less than 5 gallons (18.9 L), we do not recommend it. The only way to keep these fish in a smaller tank is by reducing their schooling number significantly. Too small a swimming space could stress out the fish so we recommend keeping a larger school in at least a 10 gallon (37.8 L) aquarium.

As an added bonus, we are including this very popular species of danio on our list due to its widely accepted aquarium name. Also known as the celestial pearl danio or Microrasbora sp. ‘Galaxy’, these fish have been on a long list of scientific and common names.

They were only discovered in 2006 and were given the name galaxy rasbora. Overnight, these fish became one of the most coveted fish in the aquarium trade, which almost caused them to become endangered. Hobbyists believed that they had many similarities to the Microrasbora genus, but they were later categorized into their own genus, Celestichthys. However, upon even further examination, they were later categorized as a type of danio, and Celestichthys became synonymous with Danio.

Galaxy rasboras are native to very specific places near Hopong, Burma, and can be found at altitudes close to 1,300 feet (1,000 m). They can be found in clear pools that have been permanently-flooded for agricultural use. These areas are usually pretty shallow but still manage to have very dense vegetation.

The galaxy rasbora only grows to a maximum length of 1.5 inches (3.8 cm) but carries a beautiful celestial pattern. Males have a bright blue body speckled with yellow patches and have red-striped fins. Females are less vibrant and tend to be bluish-green with less-apparent striped fins.

These fish will do best when kept in larger groups, with at least 20 members being the most ideal conditions; however, they will also do well in groups of 6 or more in a smaller tank of at least 10 gallons (37.8 L). Galaxy rasboras will love as many plants are you can feasibly fit into your tank, just make sure that there is enough room for them to swim as well!

For more information on setting up a galaxy rasbora tank, find our full care sheet here!

Rasboras are very peaceful, small fish that do well with most other community tank mates. Most rasboras can be kept with other rasboras, as long as they are both given a large enough tank and adequate schooling size. Some possible tank mates are:

Tetras. Pretty much any type of tetra will be compatible in a rasbora tank, but will need to be kept in schools as well so make sure there is enough room in your aquarium for two groups. Some suggested species are cardinal tetras, ember tetras, and black skirt tetras.

Hatchetfish. If you need some movement high in your tank, the best species to go with is the hatchetfish. These oddly-shaped silver fish only grow a couple of inches and stay mostly towards the surface of the water, but will need to be kept in groups of at least 6 or more.

Platies. If you’re looking for more color, then platies are one of the best beginner fish available! These fish come in an assortment of colors and only grow to a couple of inches as well. They will do best in groups of 4 or more.

Dwarf gouramis. If you have a little bigger of a tank, then dwarf gouramis will help fill up that extra space. They do tend to be a little aggressive, so they should be paired with larger rasboras. Otherwise, these colorful fish have their own personality and only grow up to a couple of inches.

More aggressive and active fish, like loaches and cichlids, would probably not get along the best with your rasboras. Though rasboras are active fish, they tend to hover in the water column and do not like to be disturbed.

Plants will always be a welcomed tank mate for rasboras!

Note: Chili rasboras will need special consideration when choosing tank mates, so make sure to research their requirements beforehand.

Rasboras need high quality foods to keep their colors vibrant and their school healthy. Luckily, they are not very picky eats and will accept most foods offered. These fish are omnivores, which means that they will need both plant- and animal-based foods.

High quality fish flakes and pellets should regularly be offered, but also mixed with an assortment of frozen and live foods. These live foods could be bloodworms, brine shrimp, or insect larvae.

Rasboras are one of the easiest fish to care for and one of the most rewarding to own. Whether you get the most popular harlequin rasbora or smallest chili rasbora, this species is perfect for the community tank. As long as they are kept in schools and water conditions are stable, they will thrive for years.

If you have any questions about rasbora care or have kept any of these species in your own aquarium, don’t hesitate to leave a comment below!