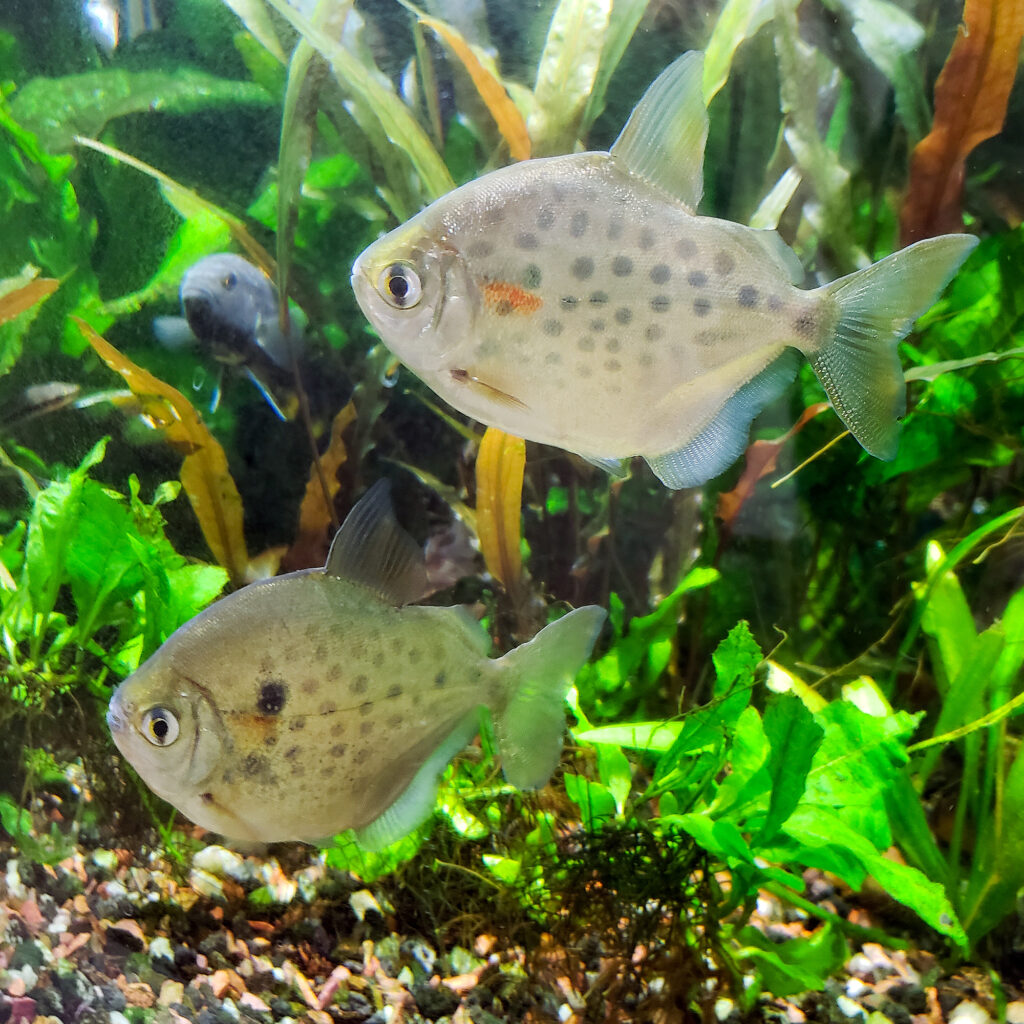 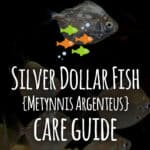 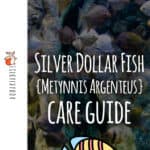 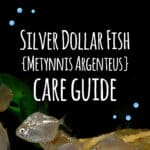 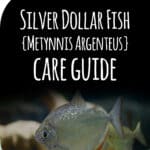 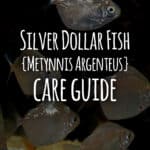 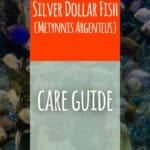 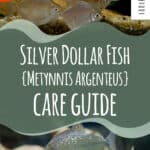 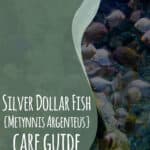 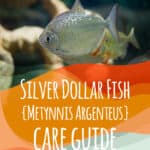 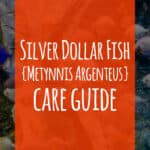 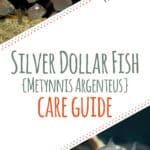 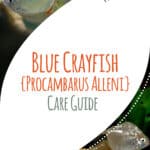 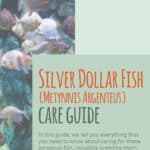 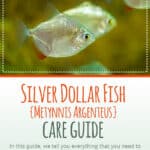 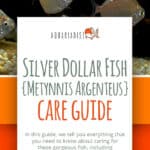 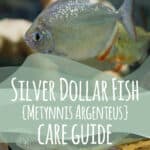 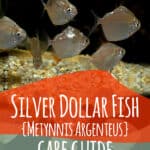 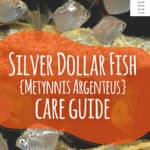 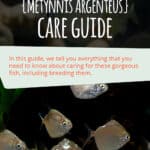 The Silver Dollar is one of the most recognizable fish that you’ll see for sale in fish stores.

These fish are quite hardy, and they aren’t especially challenging to care for. That being said, you will need a fairly sizeable aquarium of at least 75 gallons, as these are schooling fish that should be kept in groups of at least five individuals. For that reason, we recommend that hobbyists with some experience in fish care take on this species. So, if you’re new to fish keeping, you might want to look elsewhere for a more suitable species to get you started.

In this guide, we tell you everything that you need to know about caring for these gorgeous fish, including breeding them. First, let’s find out more about the Silver Dollar and its origins.

The Silver Dollar fish or Silver Dollars fish, as they are sometimes called, has the scientific name, Metynnis argenteus and was first discovered in 1923 by Ahl.

These distinctive freshwater fish are widely thought to come from South America. However, there’s a very similar fish that is also referred to as the Silver Dollar fish (Metynnis hypsauchen) that is found in the waters of Guyana and the Amazon River from the east of Rio Negro to Paraguay. Metynnis argenteus may also be seen in Brazil, specifically in the Tapajós River basin.

There are several fish that are commonly called Silver Dollars. Most of these species are one of 14 varieties of Silver Dollar that belong to the genus Metynnis and the Myloplus genus that has just two recognized species. Of those species, only Metynnis argenteus and Metynnis hypsauchen are referred to as Silver Dollar fish.

Silver Dollar fish live in shoals, inhabiting small tributaries where the vegetation is thick and dense. These fish are omnivorous, although their main food source is plant matter. However, if a meaty meal is available, the Silver Dollar will make the most of the opportunity.

These are long-lived fish with a lifespan of up to 10 years if provided with the correct conditions and a nutritious, high-quality diet.

Metynnis argenteus looks very similar to Metynnis hypsauchen, and these two species are often sold under the same name of Silver Dollar. However, you can tell the varieties apart by the black blotch above and behind each eye that is present in Metynnis hypsauchen.

Silver Dollar fish are pretty straightforward to look after, as long as you keep their water clean. As well as an efficient filtration system, you’ll need to carry out partial water changes of up 25% to 50% every other week.

As previously mentioned, these are quite large fish, and they do need a spacious tank of at least 75 gallons to accommodate a school of five or more individuals. Juvenile Silver Dollar fish can be housed in a smaller 50 to 55-gallon tank, although they do grow quickly when their diet is correct and they will quickly outgrow their living space, so you must be prepared to upgrade your tank size when necessary. Don’t be tempted to overstock your tank, as overcrowding stresses the fish and leads to outbreaks of disease.

These are active fish that need plenty of open swimming space, so we recommend that you buy a long tank rather than a tall one. Also, Silver Dollars have been known to jump when startled, so make sure that you buy an aquarium that is fitted with a cover slide or a tightly fitting lid.

In their natural environment, Silver Dollar fish live in heavily vegetated areas, so be sure to include lots of planting in your fish tank. These fish are primarily vegetarian, and they will make a meal of most tender live plants. However, you can use tougher types such as Java Fern and Hornwort that are less appetizing to the fish. Of course, silk plants make a great substitute if you don’t want to risk using the real thing.

You can use driftwood and rocks to create hiding places where the fish can take refuge when they want to, but be careful that you don’t obstruct the fishes’ swimming space.

Silver Dollars are happiest when kept in slightly dim lighting conditions that replicate their natural environment, and a dark substrate will show off the fish’s coloration to the best effect.

Silver Dollars are amenable to a variety of water conditions, although these are freshwater fish, and they cannot tolerate brackish water.

Clean water is essential if the fish are to remain healthy, so you will need to install a very efficient filter system that ensures a moderate water flow. A large canister filter is the best choice for a Silver Dollar fish tank. We also suggest that you consider adding additional powerheads to oxygenate the water and provide good circulation throughout the aquarium. That will ensure that you don’t have dead spots in the tank corners where the water becomes stagnant and stale.

Silver Dollars are tropical fish that need a water temperature of between 75° and 82° Fahrenheit. The water pH should be in the range of 5.5 to 7.5, with a water hardness of 4 to 18 dGH.

Silver Dollar fish are mainly herbivores, although they will take a small number of meaty foods as an occasional treat. You can feed these fish a variety of lettuce, plants, chickweed, cress, spinach, peas, cooked carrots, and large vegetable flakes, tablets, or pellets. Spirulina is also good food for the Silver Dollar fish, and you can also include brine shrimp and bloodworms once or twice a week as a treat.

Silver Dollars do best when offered several feeds per day. Offer just enough food to keep the fish busy for a few minutes so that you don’t overfeed them. Remember that these fish will eat live plants in the fish tank too.

The Silver Dollar is a classic schooling fish that does best when kept with a group of five or more of their own species. These are peaceful fish, but they can be shy and skittish when bullied by larger, aggressive types. Also, if kept alone, these fish will spend much of their time hiding away. Like all fish species, if they become stressed, Metynnis argenteus becomes more susceptible to diseases.

So, when choosing tankmates for the Silver Dollar fish, select large, peaceful species. Avoid introducing smaller fishes to the Silver Dollar’s environment, as they may be viewed as a food source and eaten! Suitable tankmates include:

Of course, other species of Silver Dollar fish make ideal tankmates for these large, amenable fishes.

The Silver Dollar fish is extremely to breed in captivity, provided that you have a very large spawning tank that is set up to precise conditions.

In nature, the Silver Dollar spawns in groups, typically seeking shallow water that’s very heavily planted. The fish are sexually mature once they reach one year of age and measure around four inches in length.

Preparing the fish for spawning

Before you attempt to breed the fish, separate the sexes and keep them in separate tanks for a couple of weeks. Bring the fish into breeding condition by feeding them a high-quality diet of vegetables and plants.

For successful spawning, you will need to set up a breeding tank with optimum conditions.

The tank should be shallow and at least 40 gallons for a pair of fish. If you intend to use a group, you will need a considerably larger tank.

The water temperature should be around 79° to 82° Fahrenheit. Silver Dollar fish prefer water that is soft and verging on mildly acidic. The pH should fall within the range of 6.0 to 7.0, and water hardness should ideally be around 4 to 8 dGH. Filtration should be a small, air-powered sponge that provides a low flow. Keep the lighting in the tank at very subdued levels.

Silver Dollars are egg layers, and you will need to provide spawning mops or clumps of java moss to provide a surface for the eggs to rest on. Breeding fish will use clumps of floating surface plants to spawn between, so be sure to provide that for them.

When spawning begins, the male fish will chase the females around the aquarium, shimmying up to them. The female fish release their eggs close to or in the floating plants where they are then fertilized by the male before falling to the bottom of the tank.

Each female Silver Dollar fish can produce as many as 2,000 eggs in one spawn. Unusually in fish, the parents don’t usually eat the eggs, so you can leave the fish in the tank.

The eggs usually hatch within a few days. Initially, the fry remains attached to the egg sacs as a source of nutrition. Once the egg sacs are exhausted, the fry becomes free-swimming, usually within six to nine days.

Initially, you should feed the fry infusoria. Once they grow large enough, you can feed the fry brine shrimp nauplii, small plankton, or powdered fry food and crushed vegetable flakes. Silver Dollar fish fry grow quickly and will reach their adult size within six to eight months.

The Silver Dollar is a hardy, disease-resistant fish that doesn’t generally suffer from health issues if kept in a large, well-maintained tank.

However, you must be careful not to introduce diseases, bacteria, and parasites to the environment on plants, new fish, decorations, and new substrates. New fish should be placed in a quarantine tank for at least 14 days before you introduce them to your main tank, and all other items should be washed thoroughly in clean water.

The most effective way of preventing outbreaks of disease in your aquarium is to keep the environment clean, maintain your filter system correctly, and feed your fish nutritious food in the proper quantities. Also, keeping the tank habitat as close to the fish’s home in nature helps to prevent stress, which is a major source of disease outbreaks for most species.

There are a few common fish diseases that can affect Silver Dollars, including:

As with any injury or disease, the quicker the problem is treated, the sooner it can be remedied. So, check your fish every day for signs of disease or unusual behavior, and check your water quality every week to make sure that it falls within the fishes’ preferred parameters.

You can find Silver Dollars fish for sale in most good fish stores and also through online dealers. You can expect to pay from around $5 for a juvenile Silver Dollar fish and a little more for an adult.

The Silver Dollar from South America is a large, tropical freshwater fish that can be kept in groups of five or more. Although the species is relatively easy to look after, you will need a very large tank to accommodate these stunning fish, and we do recommend that you have some experience in fish care if you’re planning on adding some of these beauties to your collection.

These hardy fish will breed readily in captivity if you provide them with the correct water conditions and a nutritious diet.