Galaxy Rasbora: Care Guide For The Attractive Species From Hopong 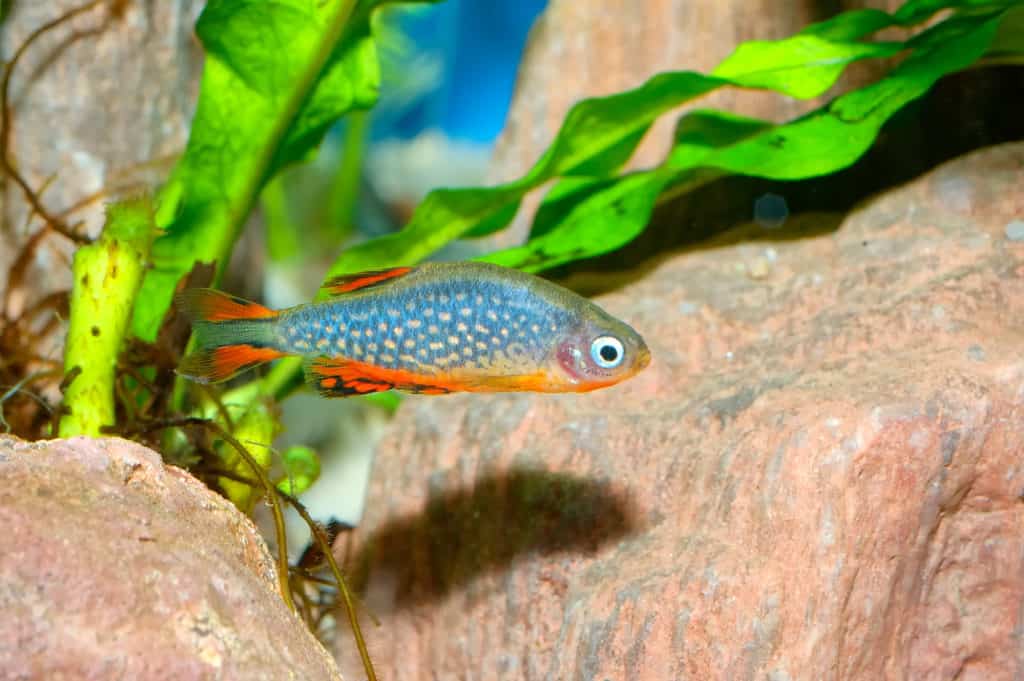 The Galaxy Rasbora is a very attractive, plump little fish that’s easy to care for and makes a great addition to a nano tank or beginner aquarist’s community setup.

These attractive fish are known by several different names, and that can cause confusion when you’re shopping for additions to your collection. In this guide, we give you the full lowdown on this unusual species, including care, the ideal tank conditions for your pets, and how to breed the Galaxy Rasbora.

First of all, let’s find out more about the identity of this fish of many names!

The Galaxy Rasbora has the scientific name, Danio margaritatus. But you’ll also see the species advertised for sale online and in fish stores by several other names, including:

The fish’s common name, Galaxy Rasbora, was coined by collectors who acquired the species before it was officially scientifically classified. Thanks to its small size, the fish was assumed to be a species of Rasbora, although it was later reclassified as a Danio. However, the fish’s common name has remained in popular use.

The Galaxy Rasbora is a small cyprinid fish that comes from only one location, a very small area close to Hopong to the east of Inle Lake in Burma.

This beautiful little fish remained undiscovered until 2006 when it quickly became known as a popular specimen in the aquarium trade. The fish’s small size, brilliant colors, and peaceable nature made it the ideal addition to many hobbyists’ community tanks.

The Celestial Pearl Danio is an omnivore, feeding on plant matter, insect larvae, and small invertebrates. This beautiful Danio lives in the small ponds that have been formed by the overflow from small springs or from seeping groundwater.

Just six months after the fish appeared for sale in the aquarium trade, the species had reportedly become so rare that collectors were only able to take a few dozen of the fish from its natural habitat each day. With captive-breeding of the species proving difficult, almost all the specimens for sale were wild-caught, placing even more stress on the diminishing population.

The situation was further exacerbated by the fact that the Galaxy Rasbora occupies very small pools, which were quickly being fished-off. However, wild Celestichthys margaritatus is a prolific breeder that spawns pretty much on a daily basis, so ponds that were assumed to be completely devoid of fish subsequently turned out to be completely restocked just a few months later.

In 2007, the Myanmar government banned the exportation of the Galaxy Rasbora. Since then, the population has recovered locally around Hopong, and now the trade is supplied exclusively with captive-bred specimens.

At the time of writing, the Celestial Pearl Danio is listed on the IUCN Red List as “decreasing,” although there is insufficient data to estimate the current populations.

The Galaxy Rasbora is a small, plump, blunt-nosed fish that grows to measure between 1 and 1.5 inches in length.

Males have a bright-blue background body coloration and have brightly colored fins, whereas the females are a dull bluish-green. The male’s caudal peduncle is higher than it is in females. The male’s body is adorned with a sprinkling of tiny, pearly spots, its back is a bronze-green color, and the female has a yellowish-white belly.

Both sexes have transparent gill covers that allow the bright red color of the gills to shine through.

As juveniles, the Celestial Pearl Danio has a striped pattern that gradually morphs into the pearly spotted markings of the adult fish.

Galaxy Rasboras are relatively easy to care for, and its small size means that this fish doesn’t require a very large aquarium to be happy and to thrive. That makes the species suitable for the new aquarist who may be looking for something a little different and more unusual than the tetras and danios that are often chosen for starter tanks.

The Pearl Danio doesn’t need a very big aquarium, making them ideal for nano tanks. So, a 10-gallon tank or a nano aquarium would be perfectly adequate for a small shoal of six to ten fish.

However, you must remember that if you want to introduce more specimens to your collection, you’ll need more space. As a general rule of thumb, you should allow 1 gallon of water per 1 inch of fish.

You should also include driftwood and pebbles in your tank decoration scheme to replicate the fish’s natural habitat and make them feel at home in a tank setting. That’s extremely important, as all tropical fish species need to feel secure and safe if they are to be free-from stress.

Stress is a major killer of tank-kept fish, as it weakens the fish’s immune system, leaving them open to disease. So, be sure to make your Pearl Danios feel as safe as possible by providing them with plenty of thick planting.

As these fishes are quite shy, you’ll get a better view of them if you use a dark-colored substrate of fine gravel or sand.

Celestial Pearl Danios live in clear, freshwater ponds that are supplied by springs or groundwater. So, you’ll need to have an efficient filtration system in your tank to keep the water clean and minimize the levels of ammonia, nitrites, and nitrates.

The water temperature can be as low as 65° Fahrenheit or as high as 80° Fahrenheit. However, it’s preferable to keep the temperature somewhere in the low to mid-70s Fahrenheit. That’s helpful if you want to keep other species of tropical fish with your Celestial Pearl Danios, as it gives you more choice.

You’ll need to carry out weekly partial water changes of between 25% and 30% to keep the water clean and reduce the levels of ammonia, nitrites, and nitrates in the tank.

The Galaxy Rasbora is an omnivore, and they are pretty easy to please when it comes to feeding.

A staple diet of high-quality micro-pellets or flakes is fine, and you can include some frozen foods, such as bloodworms and brine shrimp. Live food, including brine shrimp and white worms, are also a nutrition-packed addition to the Pearl Danio’s diet or as an occasional treat.

These charming little tropical fish prefer a peaceful community aquarium or a species-specific tank. The Galaxy Rasbora is a very shy fish that is easily intimidated by large or very aggressive species, so choose tankmates that won’t hassle or bully their smaller companions.

The Pearl Danio is related to the Danio erythromicron and has almost identical care requirements, so if you can get hold of a small school of these fish, they do make good tankmates. Both species are schooling fish, so a larger tank is best to accommodate their behavioral needs and minimum group sizes.

A large aquarium can really be brought to life by shoals of Pearl Danios and Endler’s livebearers, and you can also include other top-dwelling species such as Pygmy Hatchetfish. Many owners report that their shy Rasbora group comes out to play more often when other schooling species are included in the community.

The addition of shrimp and snails helps to mix things up and add interest to the tank, and these industrious creatures can also make a great clean-up crew, eating algae, leftover food, and general detritus.

The Galaxy Rasbora is an egg-layer that’s quite easy to breed in captivity. If you have a species-only tank, you can allow the fish to spawn naturally, although it’s preferable to separate the eggs from the adult fish immediately after spawning is complete to prevent them from eating the eggs.

The Pearl Danio scatters its eggs over spawning mops or moss clumps, so you can remove them to another tank and leave the adults in situ. Alternatively, set up a separate breeding tank and replace the fish in the display tank once you see that the eggs have been deposited.

The fry generally hatches within 48 to 36 hours. These tiny creatures need an exceptionally small food source. If your tank is well-established and contains micro-organisms and green algae, that will provide sufficient nutrition for the fry until they are larger.

The fry grows rapidly into adults over the next three months or so. As the babies grow larger, they can be fed micro-worms, high-quality flake, and baby brine shrimp.

The Galaxy Rasbora is a fairly robust species of fish, but they can be vulnerable to two of the most common freshwater fish diseases, Ich, and Fin Rot.

Both of these are bacterial diseases that are caused by exposure to stress and/or poor water conditions. So, by keeping the water clean and carrying out regular water changes, you can help to prevent outbreaks of disease.

Ich is a parasitic disease that’s caused by the protozoan parasite, Ichthyophthirius multifiliis. The Ich parasite lives in most tropical aquariums, but it only becomes a problem when fish in the tank are weakened by other diseases, poor water quality, or stress.

Fish affected by Ich may appear lethargic, flick or rub themselves against objects within the tank, and develop a rash of tiny white spots across the body, gills, and fins. Luckily, White Spot Disease is easily treated. Begin by raising the tank water temperature to 82o Fahrenheit for four days. At the same time, you need to dose the whole aquarium with an over-the-counter White Spot treatment.

Fin rot is caused by one of several bacteria, namely, Vibrio, Pseudomonas, or Aeromonas. Fin rot is very easy to treat, but if you don’t address the problem, affected fish will eventually die.

In the early stages of the disease, the edges of the fins become discolored and faded on the edges. As the disease spreads, tiny areas of the fins die and fall away, leaving a raw, ragged edge. As the condition progresses, the affected area becomes red, inflamed, and bloody, as the tissue is eaten away.

Fin rot can be treated with a proprietary medication that you add to the aquarium water. Usually, the condition clears up quickly, and the fish make a full recovery.

The Galaxy Rasbora is quite easy to find in good fish stores and through online dealers.

Now that the fish are produced in numbers by commercial breeding operations, their price is relatively low at around $4 or $5 per fish. Sometimes, you can get a slightly lower price if you buy a group of fish. That said, you will pay more if you order your specimens from an online supplier, as you’ll need to pay shipping costs.

If you have a community tank or you want a single-species nano tank, the Galaxy Rasbora could be a good choice of fish for you. These pretty little fish are somewhat unusual, and they make a great alternative to more commonly seen small community species, such as tetras and guppies.

The Celestial Pearl Danio is easy to care for, too, readily available, and modestly priced, so they’re a wonderful choice for a beginner hobbyist. So, if you’re just starting out on your aquarist’s journey, this beautiful, shy Danio could well be the perfect tropical fish for your aquarium.