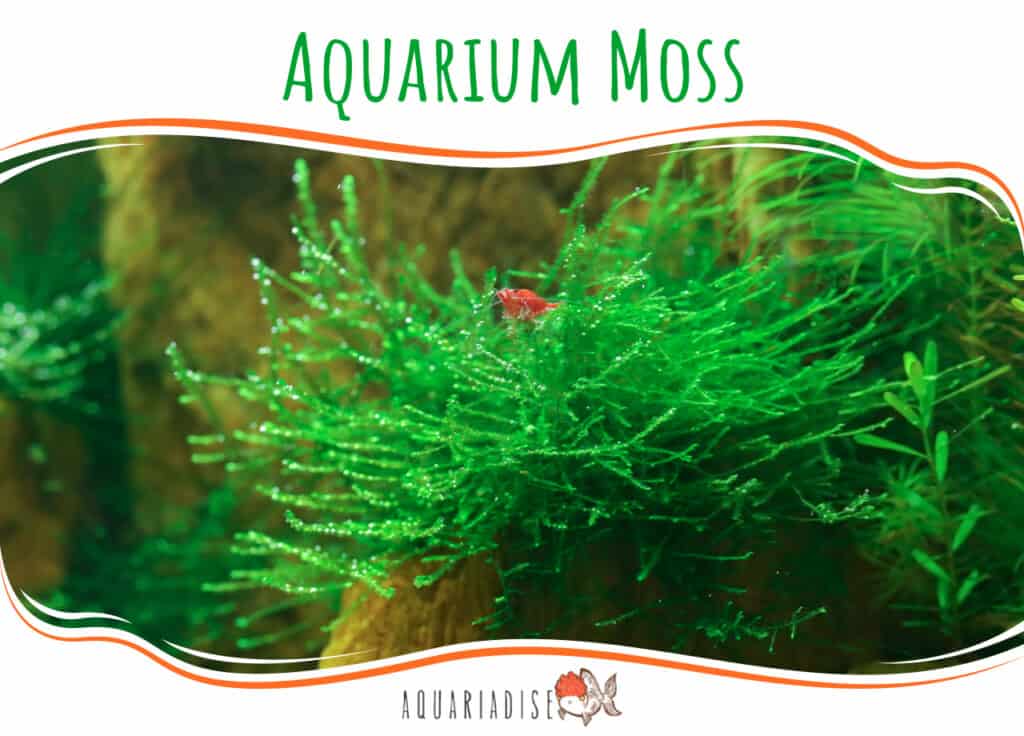 If you’re looking for a versatile, attractive, and almost-carpeting aquarium plant that’s suitable for beginners, chances are you may end up buying a species of moss.

While the terrestrial version of this plant may not be regarded as very exciting, aquarium moss has many uses and looks great as a part of almost any aquascape. It can be used to create forests of green for your fish and invertebrates with little to no additional care.

Keep reading for more information about some of the most popular types of aquarium moss and how to grow them in your freshwater tank!

What is the easiest aquarium moss to grow?

Many species of aquarium moss will grow without having to make adjustments to water conditions or lighting; however, some of the easiest mosses might have a slow growth rate which can be frustrating if you’re looking to quickly create a dense jungle in your tank.

Here are some types of moss you might want to consider based on your patience, preference, and of course, tank setup.

This moss grows tendrils and can create a prickly carpet of green that covers anything you want it to. However, its long, unkempt appearance can be a little too messy for the more pristine and tidy aquarium hobbyist, especially since it can easily take over portions of the tank.

Java moss doesn’t require any special care in regards to lighting conditions or nutrients, however, some believe it grows better in colder temperatures. Unfortunately, it has a relatively slow growth rate, which can become frustrating and discouraging.

Don’t worry though! If you choose to pick up some Java moss, it will cover your aquarium in no time.

Christmas moss is another popular choice and almost as easy as growing Java moss. The plus side is that it is more controllable than Java moss and offers a cleaner look for the aquarium.

This moss points downward and is named for the Christmas-tree triangular form of its growth pattern. However, it does need some more care than Java moss.

Christmas moss doesn’t ask for much, but it will like some additional fertilizers as well as higher lighting; carbon dioxide would also be appreciated, but it’s not necessary.

In exchange, you get a cleaner look and more control over its growth, which can be appealing for some aquarium owners.

Don’t be fooled if you come across aquarium moss balls at the pet store. These little round balls of green aren’t a moss at all! In fact, they’re a type of algae. Even though they’re not a true moss, they definitely look and feel like it!

Marimo moss balls are probably the easiest photosynthetic thing you could get for your aquarium. They can withstand extreme temperatures, don’t need bright light, and can be kept in containers without any heaters or filters.

The only true maintenance that Marimo moss balls need is to be rinsed off and rerolled once every few weeks; debris tends to collect on one side of the ball, and yellow patches form on the underside.

The only downside to this aquatic moss ball is that it’s incredibly slow-growing, though you can add as many as you want to your aquarium.

What is the fastest-growing aquarium moss?

Aquarium moss isn’t really known for its extreme growth rate but can grow consistently given the right conditions. If you really want to get the fastest rate of growth possible for your moss, you will want to be injecting carbon dioxide and dosing fertilizers.

In general, Christmas moss tends to be the fastest-growing, though that rate of growth is still slow compared to other aquarium plants.

What light conditions does your aquarium moss need?

Can terrarium moss go in an aquarium?

Yes, sometimes. Actually, most of the aquarium mosses available can be used in a terrarium setup.

However, this doesn’t mean you can collect moss from your backyard and stick it in your tank. This is because it is impossible to know what has contaminated that moss; it could have been exposed to pesticides, animal feces, or even rain that had pollutants in it!

If you want to cultivate your own aquarium moss from terrestrial species, you’ll need to experiment with cultivating your own and purifying it for your tank exclusively. However, another problem arises with this: most terrestrial mosses haven’t evolved to be submerged for long periods of time. Most species can withstand a few months underwater, but after that, they will start to grow vertically towards the surface for atmospheric air.

If they don’t get enough air in time, then they will almost surely die.

How to use aquarium moss in your aquarium

There are a few ways freshwater aquarium owners can make the most of beautiful aquarium moss in their setups.

Because of its ability to grow over most surfaces in the aquarium, moss is an extremely popular choice for aquascapers. However, its bushy growth and dense coverage also make it a great choice for fish and invertebrate breeders.

Unlike other easy aquarium plants, these mosses are not recommended for nutrient uptake since their growth rate is so slow.

One of the reasons moss is such a popular aquarium plant is that it can be used for many different aesthetic purposes.

If you use aquarium moss to liven up an aquascape, it can be left free-floating, attached to the back wall of the tank, or tied down and left to spread on driftwood.

The realistic-looking “aquarium trees” that are often used in aquascapes are actually made by tying moss on top of a piece of driftwood and letting it grow. These trees are then highly maintained to keep their shape.

Apart from just their beautiful foliage and adaptability, aquarium mosses will also prove useful when breeding some species of fish and shrimp.

Egg-laying fish will often deposit their eggs in the fine leaves, which allows you to easily pick them up and move them to a separate tank if there’s a risk of the parents eating them.

These mosses also provide a safe place for the fry to grow in, and because many micro-organisms also find a safe haven in the moss; the fry will be naturally provided with food until they’re big enough to eat regular fish foods.

Fortunately, almost all species of aquatic moss are quite easy to grow.

Root tabs aren’t necessary, and added CO2 or extra lighting is rarely required for good growth! In fact, hardy mosses, such as Java moss, can grow in ambient lighting and temperature.

However, there are a few things you should keep in mind if you want your moss to stay lush and green:

Many fish species will regard aquarium moss as a tasty snack instead of a tank decoration. Keeping it with goldfish and other herbivorous or omnivorous fish may not always end well.

On the flip side, this also means aquarium moss can be easily cultivated to feed fish with a need for green.

Regular trimming is very important if you want to keep your moss alive and healthy.

Whether your moss is attached to a surface or left free-floating, it’s very important for it to constantly be supplied with fresh, flowing water. Once the moss grows too dense, the middle part may become brown and will eventually die off!

Pruning is also recommended for aesthetic purposes. When left to grow freely, it can begin to take over the tank and can even get caught in aquarium equipment.

And remember, if you’re keeping a Marimo moss ball, you will need to rinse it off and reroll it every few weeks.

Another important factor in moss growth is the temperature of your aquarium water.

While most species can survive very high temperatures, moss usually won’t grow very well above 75 degrees Fahrenheit (23.9 degrees Celsius). If you keep fish that require high water temperatures, like bettas, you may find it growing a bit slower than when it’s kept in cooler water!

Most aquarium moss is best suited for aquariums with a temperature between 70 to 75 degrees Fahrenheit (21.1 to 23.9 degrees Celsius).

As mentioned before, aquarium moss can be attached to a surface or left free-floating, although it will grow a little better when it has something to hold onto.

Getting the moss to stay on the desired surface can be a bit of a challenge; I usually use fishing line to secure it as this is almost completely invisible, but superglue (cyanoacrylate) can also work just as well.

If you want to use your moss as a carpeting plant, you can also use a piece of aquarium-safe mesh.

For more detailed instructions on tying aquarium plants to a piece of wood or rock, check out our simple guide here.

Aquarium moss is a great plant for beginning and advanced aquarium-keepers alike.

There is a reason moss is known as one of the easiest aquarium plants to keep in the fish tank hobby, as it doesn’t require high light levels or added nutrients!

Aquarium moss can add depth and a great natural look to your aquascape when attached to driftwood and rock. When left free-floating, moss also provides a great hiding and foraging place for fish and shrimp.

If you have any more questions about aquarium moss, carpeting plants, or have had experience keeping one of these listed species in your own aquarium, don’t hesitate to leave a comment below!