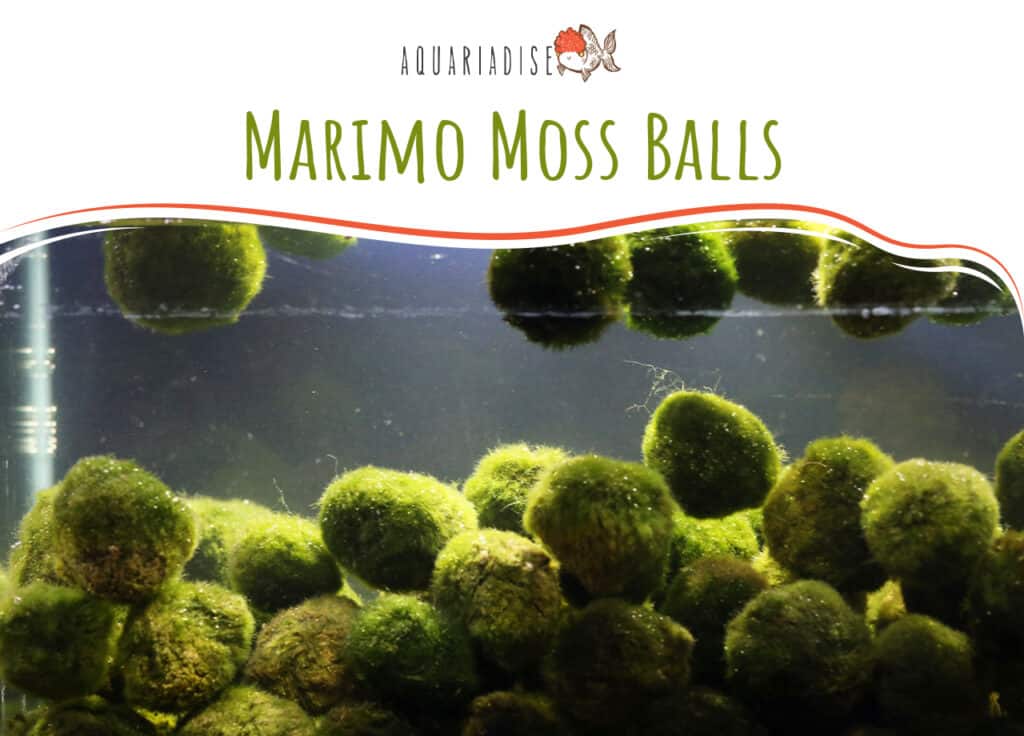 Aegagropila linnaei, better known as the marimo or moss ball, is a type of algae that grows into green fluffy balls under certain conditions. Marimo moss balls are a popular fish tank choice because of their low-maintenance care, interesting shapes, and ability to also be kept in a bowl or vase.

Keep reading for everything you need to know about marimo moss ball care and starting your own marimo tank!

Marimos don’t have many care requirements when it comes to tank housing, but there are a few things to consider. First off, don’t keep your moss balls in a spot that gets a lot of sun. They naturally appear on the bottom of lakes where it’s quite dark, so they don’t react well to direct sunlight.

Another point to keep in mind is that, although some aquarium inhabitants, like shrimp and dwarf crayfish, love to forage on and hide behind marimo moss balls, there are also creatures that love it a bit too much and will attempt to eat or destroy it.

Plecos and goldfish usually don’t do well in a tank with marimo because both fish love to eat green algae. If you’re not sure if your fish or invertebrates will take an interest, just keep your marimo moss ball in a separate container to be safe.

An interesting note about the marimo moss ball is that it can actually be kept in a brackish water tank. It is noted on various aquarium plant websites that it is able to thrive in waters with a salinity up to mid-end brackish (that’s 1.015; check out the guest post I did for Sitting by the Koi Pond for more information on brackish aquariums). Adding some salt to the water is sometimes recommended when dealing with a marimo moss ball that is fading from green to brown.

Whether you keep your marimo moss balls in a bowl by themselves or in a fish tank, it is always important to regularly change the water. While some aquarium keepers only do water changes every two weeks, some have found that their tank requires it every week; make sure to pay attention to the bioload entering your tank and how your cleanup crew and filter are handling the waste.

Change all the water in the bowl or around 25% in a filtered aquarium. Tap water usually works fine for this, although you might want to dechlorinate it if necessary.

A clean marimo is a healthy marimo! It’s a good idea to pick up your marimo moss ball once in a while (especially if dirt particles have accumulated on it or if the green has turned a bit brown or greyish) and gently wash it by squishing it a few times in a container with some clean water.

You can then roll it around in your hands to prevent it from falling apart from the squishing; this should be done very carefully. It helps the marimo moss ball maintain its nice round shape, which it would naturally get from being rolled across the lake floor by the current; this doesn’t happen in a bowl, vase, or aquarium on its own, so it’s a good idea to re-roll your moss every so often.

In the “wild,” marimo moss balls only occur in cooler areas like Iceland and northern Japan. It prefers cooler water fish tanks; if its container/aquarium gets a bit hot (77° F/25° C degrees ) during summer, consider temporarily moving it to a slightly cooler place.

Your marimo moss ball can actually be placed in the refrigerator during the hotter months, but a spot near an air conditioner is also fine.

Although marimo balls can withstand a range of temperatures and water conditions, they may turn a strange color; this is an indication that something is wrong.

Marimo turning white/lighter means that it is probably receiving too much light. If the marimo ball also seems a bit slimy or if its texture seems otherwise unusual, you may be dealing with hostile algae. These algae choke the slow-growing marimo, so it’s best to carefully wash them off or remove them with tweezers.

Marimo turning brown may be a sign that it’s time to gently clean it. If this doesn’t fix it, try carefully picking off the brown (dead) parts and adding a bit of salt to the water to stimulate growth. If the bottom of the marimo ball has turned brown because it hasn’t received light for longer periods of time, be sure to start rolling the marimo around a bit more often to prevent parts of it from dying off again.

Marimo turning black and/or falling apart. Marimo is unfortunately known to start decaying from the inside out, especially when it has been covered by hostile algae for a while or when it is simply too big for clean water to reach the inside. In order for your marimo moss ball to become healthy again, the black parts should be removed and the ball should be gently re-rolled. It’ll be smaller than it was before, but it now has a good chance of surviving and growing back.

Artificial marimos are a real thing. Most stores don’t mean to sell you the wrong thing, but sometimes there is some confusion. I’ve received a few comments asking about this, so here are some points to check if you’re not sure:

Although a marimo moss ball is not always easy to find in local aquarium stores, they are available online on many sites, like The Shrimp Farm or Amazon. Another option is to ask your aquarium store if they can order them for you, or buy them from another aquarist.

If you follow the guidelines from this care sheet, your marimo balls can live for years and years and eventually grow quite big or form multiple small marimos by falling apart. Don’t expect it to grow too quickly, though, marimos are said to only grow 5 mm a year!

If you have any more questions about marimo balls or want to share your own experiences with this interesting algae, don’t hesitate to leave a comment below!