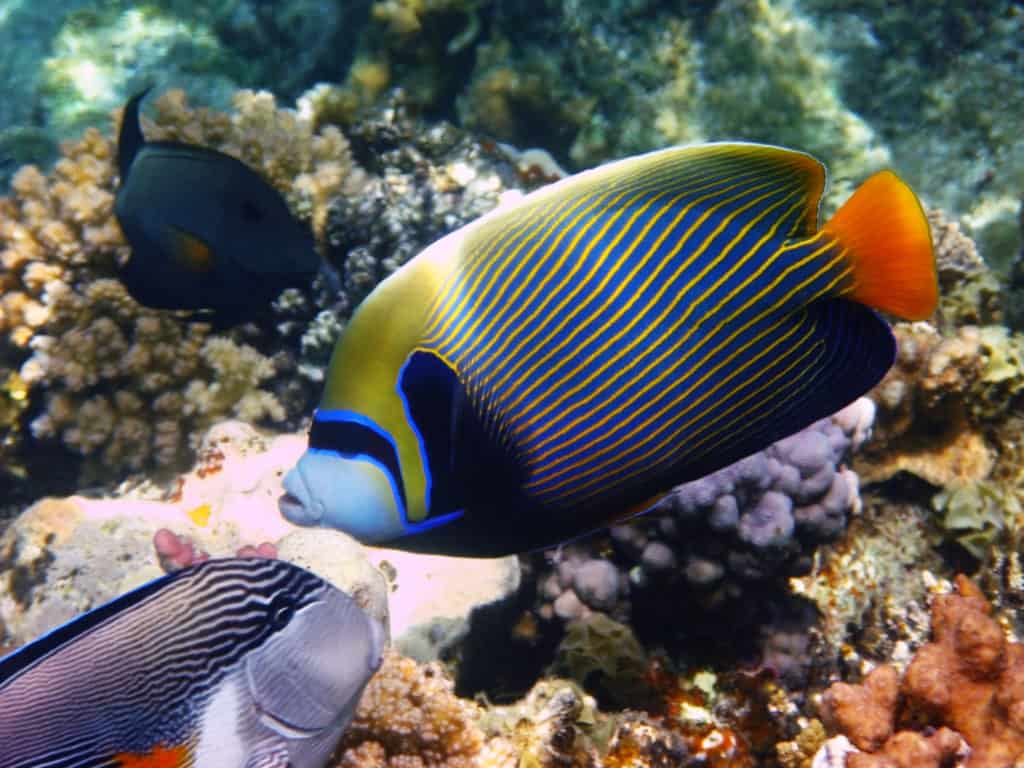 The emperor angelfish (Pomacanthus imperator) is truly one of the rulers of the saltwater reef community. These impressive fish have alternating yellow and dark blue bands with electric sapphire accents and can grow to over a foot long. These fish glide effortlessly through the water, picking at coral and other food that they find among the rocks. Because of their large size and potential territorial behavior, emperor angelfish require intermediate to advanced care level.

Keep reading for everything you need to know about emperor angelfish and keeping an emperor angel in your own tank!

The emperor angelfish (Pomacanthus imperator)is sometimes also known as the imperator angelfish after its scientific name.

Emperor angelfish can naturally be found throughout the Indo-West and Central Pacific regions (apart from Rapa, Easter Island, and the Marquesas Islands), as well as coastal East Africa and the Red Sea to the Tuamotus Islands. They may also be spotted around Japan and New Caledonia. Any emperor angelfish observed around Florida, Puerto Rico, or the Hawaiian Islands is most likely due to hobby aquarium release.

Juvenile emperor angelfish start their lives alone on the outskirts of main reef structures in more shallow and protected patch reefs. Adult fish move to deeper areas with rich coral life and establish territory in the brickwork while living in harems.

While wild emperor angelfish populations have remained stable, they are a popular subject for photographers and fish enthusiasts.

In aquarium stores, it is very common to see juvenile emperor angelfish and not even know that they’re the exact same species as the adults. They really look completely different from each other!

Juvenile emperors have alternating electric blue, black, and white rings. The dorsal fin also has a white rim that transfers over to the adult colorings.

These fish will keep their juvenile colors for about 2 years, though this time period seems to be prolonged in captivity. During these couple of years, they will reach about 3-5 inches (8-13 cm) in size.

Before the juvenile colors fully fade, emperor angelfish will go through a transitory subadult stage. This is when they will start to make their way to deeper water and begin establishing territories around the main reef. During this stage, the subadult body becomes more extended and rounder. The tail fin begins to change from blue, black, and white to a solid yellow, while they also start to develop their signature horizontal yellow and blue patterning.

Soon, all their juvenile colorings and patterns will have changed and the adult emperor will now have alternating yellow and dark blue horizontal stripes, white mouth, black and blue eye mask, and white dorsal fin rim.

An adult emperor angelfish will reach a mature size of about 15 inches (38 cm), though many fish enthusiasts say that they don’t usually reach this size in home aquariums. It is also believed that emperor angelfish can easily live 10-15 years under ideal tank and water conditions.

Male and female emperors look very similar to each other and it can be very difficult to tell them apart; there is supposedly a way to tell them apart by looking specifically at their face mask. Males tend to have a bluish hue to their faces while females will have more grey tones. However, these differences in color could also be due to them being collected from different areas.

Adult emperor angelfish are big fish. As mentioned before, some enthusiasts don’t even realize that juveniles are the same fish as adult emperors, and many mistakingly buy them at their small size not knowing their true care requirements. Due to their territorial behaviors and large size, a minimum tank size of 200 gallons (757 L) is needed.

This tank size will not only allow ample room for your emperor angelfish to openly swim, but it also allows enough rockwork to be added to form a labyrinth of caves for your fish to hide in.

For the most part, emperors are pretty hardy and mostly just require stable water parameters to thrive. One of the most difficult parts of having an emperor is actually acclimating it to your tank once you bring it home. They are easily stressed and sudden changes in environment and water parameters can affect the health of your fish. Because of this, it is highly recommended to quarantine them in a separate tank for at least 2 weeks before adding them to your main display.

The other reason they are such a difficult fish to keep is because of their demanding tank size and rockwork as well as the possibility that they can become aggressive and stress out the rest of the fish in your aquarium.

Some enthusiasts have claimed that their fish is one of the most peaceful in their tank, while others have said that their fish has overrun their tank. However, emperors seem to be especially aggressive towards other angelfish species that are similar in shape and color.

While the emperor angelfish is widely considered as not reef safe, some hobbyists have had luck keeping these fish with coral, especially small polyp stony (SPS) corals. It is generally agreed that juvenile fish are least likely to pick at corals but that they will eventually eat any corals you try to put in the tank later down the line as they grow.

Then there are the rare occasions where both juveniles and adults have completely ignored corals in the tank. It is really up to chance what kind of appetite your emperor angelfish will have, but it is safe to say that if you don’t want to lose a specific coral, don’t introduce one of these fish into your system.

While small slow-moving fish that can easily be eaten and similar-looking fish should be avoided, there are tons of other options that will quickly fill up all that open space! To help prevent territorial issues, it is best to add the emperor angelfish last to your aquarium.

In general, some good compatible fish might be tanged (yellow, purple, naso, blue), wrasses (six-line, fairy, cleaner), butterflies (copperband, raccoon, yellow longnose), and other angelfish (flame, coral beauty, swallowtail). Some have had luck introducing queen angelfish and majestic angelfish, though you should always be mindful of what your tank can allow and have a plan ready if they are incompatible.

To help keep your fish healthy and to maintain their spectacular colors, it is best to provide a large variety of high-quality foods a couple of times a day. As omnivores, these fish require a mixture of plant- and animal-based foods.

It is recommended to offer Spirulina, frozen and freeze-dried foods, algae supplements, and other meaty foods like squid and shrimp.

What do emperor angelfish eat in the wild?

Emperors are known to scan the rockwork of reefs, looking for something to munch on. One of their favorite snacks is sponge (Porifera), but they’re also commonly seen taking chunks of soft corals and large polyp stony (LPS) corals.

Otherwise, they will eat some types of algae as well as small invertebrates like shrimp and clams.

Whether you want to purchase the fish as a juvenile or as an adult does not make too much of a difference; it’s up to preference if you want to watch your fish change colors over the course of a few years. Just remember that it is not recommended to add any additional fish after adding your emperor angelfish, so make sure your stocking plans are final.

When picking up your emperor angelfish, either juvenile or adult, always look for the most colorful and alert fish that you can find. You should not purchase any fish that have really bad fading or that are breathing heavily; emperor angelfish are especially prone to stress if tank conditions change suddenly, and these signs may mean that the store did not acclimate the fish well.

That being said, these fish can be very expensive, especially as adults. It is well worth the time to properly acclimate and quarantine your own emperor angelfish before adding it to your tank.

Because of their potential size and amount of space required for just one fish, it is highly impractical to attempt breeding emperors in an aquarium setting. However, some experienced breeders have had success and have even created hybrids with other angelfish species.

An emperor angelfish will be the showpiece of your tank. Their stunning yellow and dark blue colors and impressive size are highly sought after, but only a few have the aquarium systems that these fish actually need. Never buy a juvenile angelfish with hopes of upgrading your tank and never stick an adult in anything less than 200 gallons (757 L).

If you have any other questions about emperor angelfish care or have kept these angelfish in your own aquarium, don’t hesitate to leave a comment below!