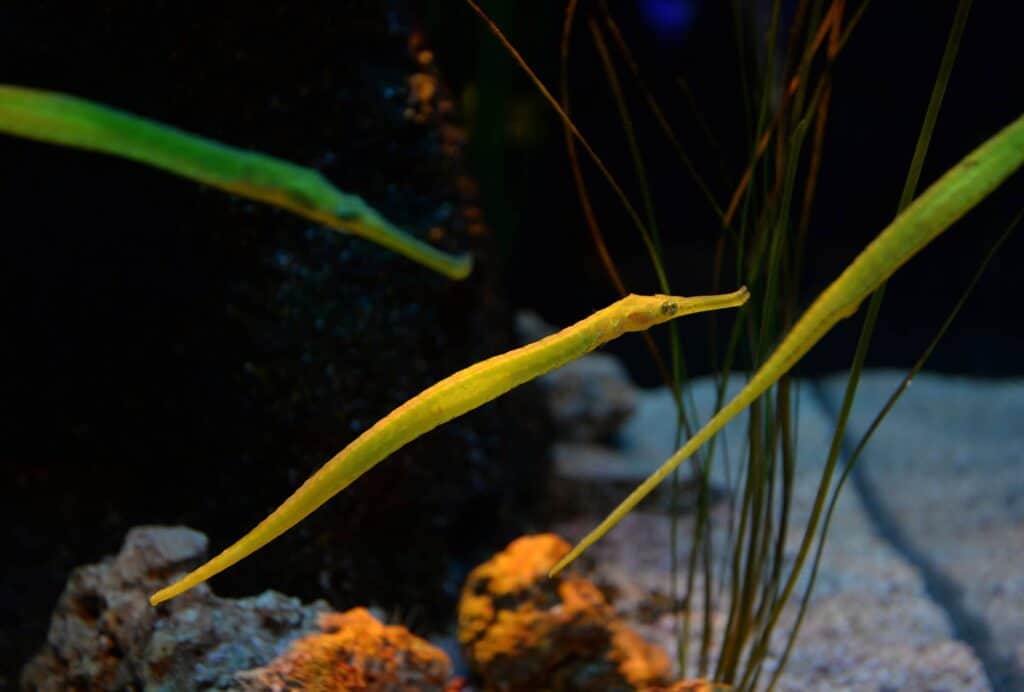 If you’ve ever seen seahorses at the aquarium, you might have also seen some odd-looking skinny fish along with them. These are pipefish and are a very popular fish to keep in the home aquarium!

Pipefish are very difficult to keep and are only recommended to expert keepers.

Keep reading to find out everything you need to know about these unique fish and to see if you’re up to the challenge!

There are several pipefish species that you might come across in the aquarium hobby. All domesticated species are usually part of the Doryrhamphus genus, commonly referred to as flagtail pipefish.

Though Doryrhamphus spp. are the most popular in the aquarium hobby, it’s possible to find wild-caught varieties as well.

Pipefish get their name from their long, thin appearance and especially small, tubular mouths.

Is a pipefish a type of seahorse?

Pipefish and seahorses are closely related and can sometimes be found in the same natural habitats; scientifically, they are both a part of the Syngnathidae family classification.

However, from there, the family is further broken up into two subfamilies: Hippocampinae (seahorses) and Syngnathinae (mainly pipefishes and seadragons).

This means that there are enough physical and physiological differences to make pipefish and seahorses different species.

We’ll only be looking at the pipefish species commonly available in the aquarium hobby for this article. This includes most Doryrhamphus species.

Pipefish species in Doryrhamphus are native to the Indian and Pacific Oceans. These pipefish live on reefs, whereas many other species take shelter in seagrass in more open and shallow water.

Instead, Doryrhamphus pipefish are commonly found in small groups or mating pairs around corals and other fish. They especially like rocky overhangs and cliffs where they can hunt for microorganisms, like copepods.

Are there freshwater pipefish?

Yes, there are freshwater pipefish, though they usually move between freshwater, brackish, and saltwater conditions.

While these fish are available in the aquarium trade, their saltwater counterparts are much more widely available.

Pipefish are very easy to identify due to their unique body shape. These fish are needle-thin and usually decorated with bright, vibrant colors and a short tail.

Sizes, colors, and patterns range across species. Here are some ways to identify some of the most popular pipefish available:

Pipefish require a unique tank setup, and many hobbyists choose to keep them in a species-only tank or with seahorses.

This tank should be at least 30 gallons (113.6 L) for smaller species and 55 gallons (208.2 L) for larger ones. These fish love to stick close to the rocks, so large amounts of swimming space are appreciated but not required.

Instead, try to create as many caves and cliffs as possible with your rockscape.

At the same time, you will need to think about flow. Pipefish aren’t supposed to do well in high water flow, but hobbyists have made them work in mixed and small polyp stony coral (SPS) dominated tanks that require a stronger current.

The more significant concern is controlling the intake of your filtration. Any filtration equipment that could potentially suck up a pipefish should be baffled with a sponge or netting.

Though you might not think this is necessary, it is better to be safe than sorry!

Even though pipefish are seen as difficult fish, their actual preferred water conditions are not all that much different from other fish and corals.

If you’re attempting to keep pipefish, it’s necessary to have a mature tank that has been running for at least six months. This ensures that parameters are stable and that a good food source has been established for your pipefish, which we’ll talk about later.

Otherwise, these fish need 0 ppm ammonia, 0 ppm nitrite, and minimal nitrate. Other parameters are standard for a tropical saltwater tank:

As mentioned before, many hobbyists choose to keep their pipefish in a species-only tank or with seahorses. The main problem you are likely to run into with many tank mates is that larger, faster fish will outcompete your pipefish for food.

One of the biggest reasons pipefish die in captivity is starvation, so you want to have your tank mates planned before going out and getting a pipefish.

Some possible pipefish tank mates could be:

More experienced hobbyists have had success keeping pipefish with a variety of larger reef-safe fish. Beginners should not attempt this right away.

Also, make sure to keep pipefish in small groups or mating pairs as they love to be together in a social setting.

Though small, pipefish are very entertaining to watch. Sometimes they’ll be gliding around the tank, while other times, they’ll be slithering around like a snake!

For the most part, though, you’ll find your fish searching for food in and around the rockwork.

Pipefish can camouflage themselves incredibly well, which can be concerning at first when you don’t see your fish in the tank. But once you get used to it, it can be entertaining to see where your fish chooses to hide itself that day.

Typically, pipefish are not aggressive, and hobbyists have had success keeping multiple pipefish species together.

However, males of the same species can become aggressive towards each other, though this is rare.

If you see any aggression between your pipefish or with other fish, separate them immediately.

Diet is where pipefish care becomes extremely difficult. Remember when we said that you would see your pipefish looking for food most of the time? We’re not kidding.

These fish are not only voracious feeders, but they’re also very picky and need a specialized diet. Because of this, it is necessary to set up a live food farm, or else feedings can be extremely expensive and inconvenient.

Pipefish love live copepods; copepods are small bug-like crustaceans that naturally occur in saltwater environments. Some copepods may come in on live rock or algae, but sustaining a population for pipefish is much different.

If you have sump filtration, then setting up a copepod farm can be easy. Simply use one of the chambers as a refugium with chaeto algae and seed it with a healthy copepod population, typically sold at fish stores.

A separate tank can also be set up for the same purpose and does not need to be part of the filtration. Hobbyists have had success broadcast feeding or creating special feeding areas within the tank.

Though your pipefish mostly prefer live copepods, these fish need daily feedings, and it can be challenging to keep up with demand.

Because of this, it is recommended to transition pipefish to frozen and freeze-dried foods, like brine shrimp, mysis shrimp, amphipods, isopods, and various larvae, as quickly as possible.

When purchasing your pipefish, you should ask if the fish is captive-bred and ask to watch it eat. Captive-bred fish can adapt to new tanks much faster and are more willing to eat various foods than depend on just one.

Asking to watch the fish eat will also reassure you that the fish is healthy and give insight into the preferred diet of the fish when taking it home.

Pipefish can get sick just like any other aquarium fish and can contract common diseases, like ich and velvet, as well as fungal and bacterial infections.

Sadly, pipefish don’t tend to live very long in captivity. Most hobbyists have them for around 3-5 years even though it’s believed they can easily live to 10 years with perfect conditions.

To increase the lifespan of your fish, only buy captive-bred individuals.

Pipefish and seahorses are some of the most interesting animals when it comes to reproduction. You might have known already that male seahorses birth the babies, but pipefish do too.

While a fascinating process, success rates are meager. The best way to start breeding is by purchasing a small group. Many species of pipefish are polyandrous, and females will mate with numerous males.

If you’re lucky, multiple females will interlock with one male over a period of time. The male-brooding pipefish will then carry the fry in his brood pouch until ready to give live birth.

The fry are usually left without supervision, making survival rates very low if left alone in the same tank. If you’re planning to raise these fry in a separate tank, make sure to have plenty of food available.

Although over 200 Pipefish species exist, only a few have been successfully kept in the home aquarium.

Generally, the smaller the species, the more aggressive the pipefish. So, before you splash your cash on one of these guys, you need to research to determine if your desired species will get along in your existing setup.

The most popular and readily available species of pipefish for the aquarist to consider are the Dragonface pipefish and the Flagtail pipefish.

Flagtail pipes are prized for their fantastic colors. There are two types of Flagtail pipefish; Doryrhamphus spp and Dunckerocampus spp.

Doryrhamphus spp. can be a good choice for reef tanks, although they must be kept singly or in a mated pair, as they can be aggressive toward their own kind.

Dunckerocampus spp. is a more peaceful character that can sometimes live in small groups. However, this species is more challenging to ship successfully and is more prone to disease.

Here’s a brief overview of the types of Flagtail pipefish you might want to consider keeping.

These are just about the hardiest varieties of Flagtail pipefish you can get and make a good choice for pipefish beginners.

The fish reach around three inches long, making them suitable for a smaller tank. However, these are pretty active fish that need a decent amount of swimming space to be happy.

If you choose this species, we recommend having one pipefish or a mated pair of a similar size. These fish can be very aggressive, and two specimens of different sizes or sexes will almost certainly fight to the death.

This species of pipefish make excellent reef fish. Janss pipefish are larger than the Bluestripe variety and are not as aggressive. That said, it’s best to keep a single specimen, as these fish will fight with other doryrhamphus.

Interestingly, these fish spend most of their time swimming upside down!

Banded pipefish are the most common species in the Dunckerocampus category.

Banded pipefish can usually live happily in pairs, although aggression has been witnessed in some cases.

Although it’s undoubtedly beautiful, the Yellow Banded pipefish doesn’t have the best survival record in captivity. Therefore, this species should only be taken on by expert fish keepers.

Of the 12 recognized species of Dragonface pipefish, only three are seen in the hobby:

You’ll need a tank of at least 30 gallons capacity to keep Dragonface pipefish, and there must be a good supply of live food and macrofauna to prevent starvation, as these pipefish will not eat frozen foods.

Dragonface pipefish are generally peaceful creatures that can live in small groups and pairs, provided your tank is large enough.

Pipefish are one of the most fascinating fish you can get for your saltwater aquarium. However, these fish should only be kept by experts as they need a specialized diet, tank setup, and select tank mates.

If you’re able to set up a live food farm for them, though, you can have one of these beautiful species for years on end.

If you have any questions about other species of freshwater or saltwater pipefish, seahorses, or have had experience keeping these animals together, don’t hesitate to leave a comment below!