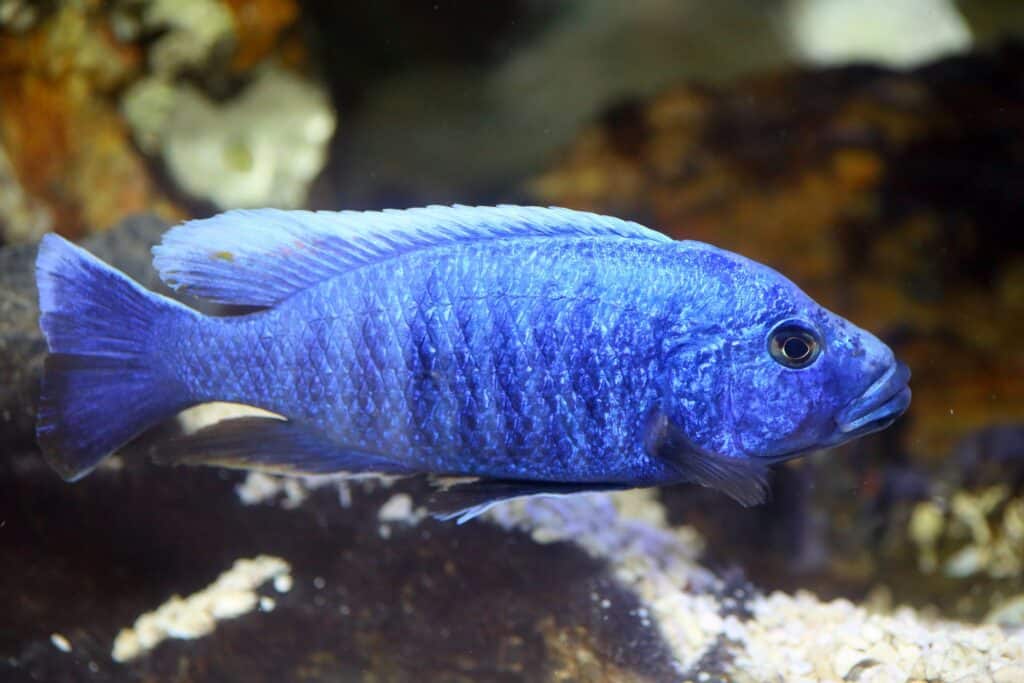 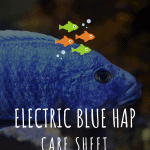 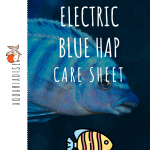 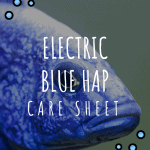 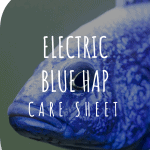 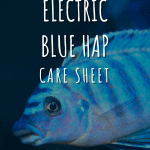 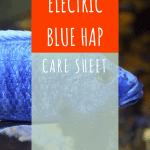 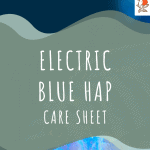 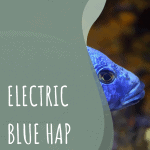 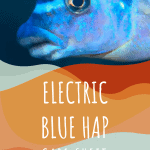 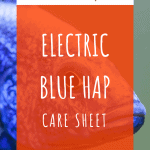 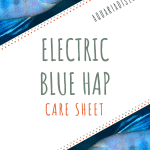 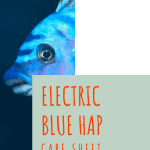 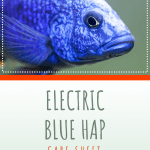 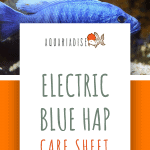 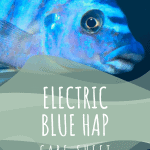 The electric blue hap is one of the most popular species of cichlid due to the piercing blue coloration of the male fish. These fish aren’t any more difficult to keep than most other species of cichlid and make a great addition to a Lake Malawi-themed freshwater system. However, they don’t turn up too often in the aquarium trade and are often mislabeled as one of their close relatives.

Keep reading to find out everything you need to know about electric blue hap care and keeping these beautiful fish in your own aquarium!

It is very common to see S. fryeri and S. ahli treated as the same species within the aquarium trade. As we’ll see later, these two species have some slight differences to them. You’re also much more likely to come across Sciaenochromis fryeri than Sciaenochromis ahli as S. ahli is rarely sold in the hobby.

In all, there are only four different species of the Sciaenochromis genus, S. benthicola and S. psammophilus, with only S. fryeri and S. ahli being the most commercially available aquarium fish.

The electric blue hap is native to both the shallow and medium depths of Lake Malawi in Africa. Lake Malawi is the fourth largest freshwater lake in the world by water volume and known for its diversity of cichlid species. Electric blue haps can be found up to around 500 feet (152 m) deep, and usually establish territories around caves made from the rocky bottom. Water temperatures remain around 75-84° F (23.9-28.9° C) and keep an average pH of 8.0.

It should be noted that while Sciaenochromis fryeri is also native to Lake Malawi, they are found in much shallower coastal areas, reaching maximum depths of about 164 feet (50 m). It is also believed that while S. fryeri can be found throughout most regions of the lake, electric blue haps (S. ahli) is only found in the northern sections.

Electric blue hap cichlids get their name after their brilliant blue body. It can be difficult to differentiate a true electric blue hap (S. ahli) from a S. fryeri as S. ahli are rarely imported and have very similar colorings; it becomes even more confusing since many hybrids of S. fryeri have different colorations and may even have different markings based on depth and location that they were collected from.

Both species have electric blue bodies and may display darker vertical bands that start at their gills and end before their caudal tail. The only true differentiation between the two species has been found in the head length of both fish; true electric blue hap cichlids tend to have more elongated heads while S. fryeri has a shorter, stumpier point. Other colorations, like a redder anal fin and light blue stripe down the top of their dorsal fin, might be due to geographical differences in the populations. Females of both species will be much plainer and lack the solid blue body.

Because these fish are so similar and S. ahli is rare to come across, it’s sometimes debated if true electric blue haps even exist at all. In the aquarium hobby, they are usually considered one and the same fish. However, in the scientific database, these are two different species of fish that occur in Lake Malawi that live in totally different ecosystems.

While it is unlikely to ever come across S. ahli at your regular pet store, it is best to only trust the most reputable breeders and importers if they say they have one available. Even then, it will be incredibly difficult to correctly identify the species.

How big do electric blue hap cichlids get?

Male electric blue hap cichlids grow to be about 7-8 inches (17.8-20.3 cm) long when fully grown, which is considerably larger than some other colorful cichlid species. Females will grow to be slightly smaller and plainer in color.

A minimum tank size of 75 gallons (283.9 L) is recommended to start. These fish will appreciate plenty of cracks and crevices to form territories by way of rocks or terra cotta plant pots; just make sure that both have been cured for aquarium purposes as uncured decorations can cause fluctuations in water parameters. Electric blue haps will also appreciate some branches for extra coverage and bring a natural element to the setup. A sandy substrate is most recommended.

Water parameters need to be kept stable in order to keep your cichlids from stressing out. Water temperature should stay constant between 75-82° F (23.9-27.8° C) with pH slightly more alkaline than usual between 7.6-8.8; it may be worthwhile to use crushed coral to help maintain a higher pH.

As a cichlid, electric blue haps are semi-aggressive fish. They need enough room to establish territories and tend to be more aggressive towards fish that are similar in color. It is recommended to keep several females for every one male in order to diffuse aggression and harassment. In order to keep more than just one male and 3-4 females, a 100 gallon (378.5 L) aquarium or more is recommended.

Some compatible species are:

For the most part, these cichlids are carnivores, meaning that their diet is primarily made up of animal-based foods. In order for these aquarium fish to keep their colors vibrant, it is best to provide a well-varied, high-quality diet. This will include an assortment of living, frozen, freeze-dried, and flake/pellet foods.

Foods like brine shrimp, worms (earthworms, bloodworms, Tubifex worms), and krill usually come as live, frozen, or freeze-dried. However, some of these can be fatty and should not be the staple of your cichlid’s diet. Instead, a high-quality fish flake/pellet should be offered regularly with supplemental treats every now and then.

While largely carnivorous cichlids, electric blue haps will enjoy the occasional green every now and then. You may offer algae wafers or other blanched vegetables, like spinach and zucchini, from time to time; though, be sure to remove any food shortly after feeding that hasn’t been eaten so that it does not start to rot.

Note: Some resources even categorize members of the Sciaenochromis genus as piscivores, which means that these fish eat other fish. This means that any smaller fish that are added to the aquarium are at risk of becoming a meal; on the other hand, it also means that feeder fish may be used as an occasional treat for your cichlids.

Because these fish are rarely correctly identified in the aquarium hobby, it can be a little difficult to predict their exact behaviors. Generally, they are bottom- and middle-water column swimmers.

It is safe to assume that electric blue hap cichlids are aggressive. Like any other cichlid, electric blue haps will defend their territories as well as chase other male electric blues and similar-looking species. Some hobbyists have had more active fish and find their electric blues regularly swimming around the perimeter of the tank instead of staying to just one confined area.

Electric blue haps are appealing to breed due to their stunning colors and rarity. The main problem is that since not many hobbyists have owned these cichlids, there isn’t much information about how to successfully breed them. However, as long as they’re happy, your fish will most likely spawn on their own.

To breed these fish, it is best to have an aquarium setup devoted to only this species. Only one male should be kept for every 75 gallons (283.9 L), with 3-4 female electric blues to diffuse aggression. Water conditions should be stable and plenty of cracks and crevices should be made with rocks to allow the male to set up a territory.

The male will attract a female and the eggs will be laid on top of the rock or platform. The male has chosen such a particular spot that these eggs will then usually roll down closer to him where he fertilizes them. Like most types of cichlid, electric blue haps are mouthbrooders which means that the female will then take the fertilized eggs into her mouth.

After about 3 weeks, the eggs will be ready to hatch. At this point, the female will have an obviously distended jaw where she houses the fry. If she is stressed by the male or by changing water parameters/conditions, then she may spit them out or swallow them.

The fry are decently sized when they hatch, so they will be able to immediately take most small foods, like brine shrimp and microworms. Once they get older, they may be given other crushed up fish foods.

If you’re looking for a rare cichlid, electric blue haps check the box. However, they’re frequently mixed up with the similar S. fryeri in the aquarium trade, though they are definitively different species. These fish have similar needs to other types of cichlid but will need to avoid more aggressive species and similar-looking fish.

If you have any questions about electric blue hap care or have had experience keeping these rare and beautiful fish, don’t hesitate to leave a comment below!