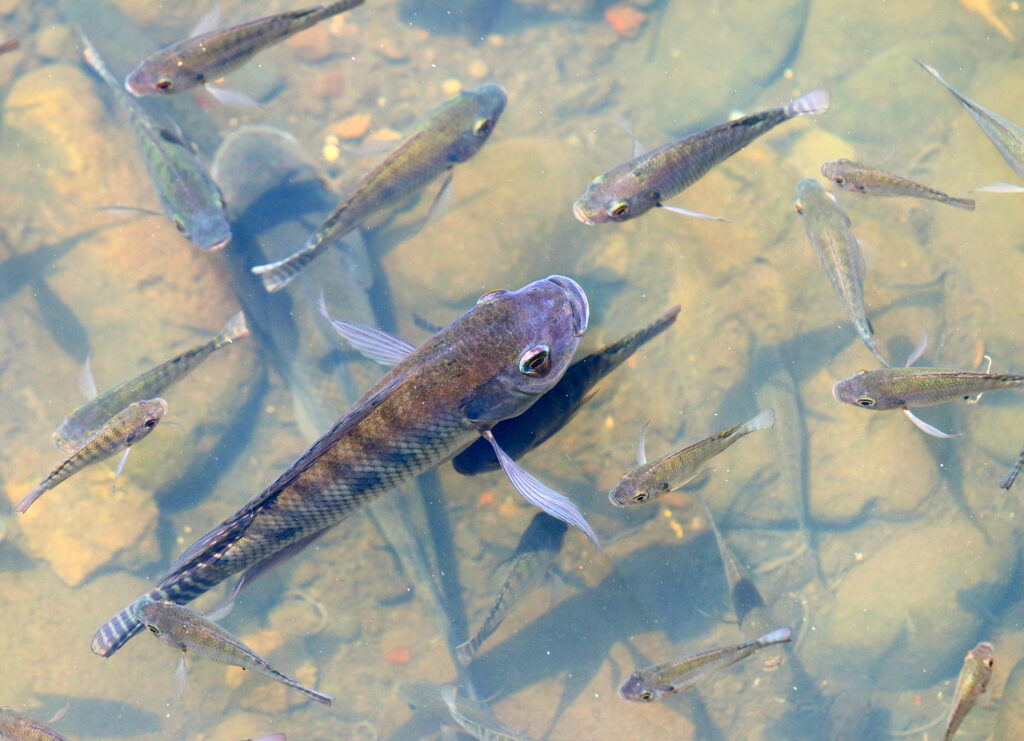 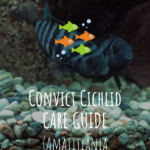 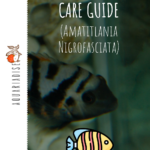 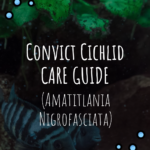 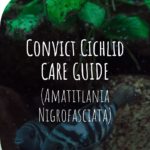 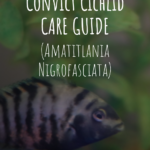 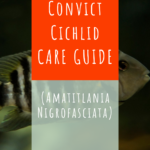 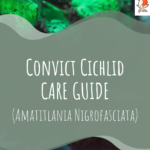 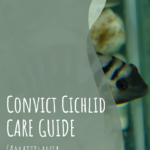 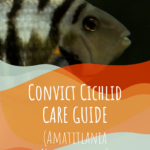 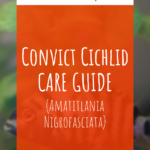 The Convict cichlid could be just what you’re looking for if you have a community of aggressive or semi-aggressive species, and you want another fish to add to your collection. Despite their reputation for aggression, Convict cichlids are extremely easy to care for and can be suitable for a well-informed beginner, especially if kept in a single-species aquarium.

If you’d like to learn more about these fascinating fish and their care requirements, read this comprehensive guide.

Convict cichlids (Amatitlania nigrofasciata) were first described in 1867 by Gunther. These attractive fish come from Central America, ranging from Costa Rica to Guatemala on the Pacific slope and from Honduras to Panama on the Atlantic slope. In some parts of the U.S., Convict cichlids are found living in the wild environment, having been introduced by fish owners.

In fish stores, Convict cichlids are sometimes advertised as Zebra cichlids. There’s also a pseudo-albino variety that’s often called the White Convict or Pink Convict cichlid. The species is not considered to be at risk in the wild and doesn’t appear on the IUCN Red List at the time of writing.

In their natural habitat, Convict cichlids live in bodies of water that are fed by small streams, in fast-flowing rivers, or in warm pools. The fish live in shallow, rocky areas, sheltering in crevices and cracks, where they feed on insects, worms, fish, plants, and crustaceans. This species of cichlids are almost always found in waters where there are plenty of hiding places and cover, and they generally keep clear of open water.

The finnage is clear to pale yellow in color. Thanks to inline breeding, there are a few color variants available, including the White or Pink Convict cichlid, both of which are pseudo-albino varieties that are cream or pink and don’t have the vertical bars of the original morph. Males are monotone in color, and females have an orange patch on their stomachs.

These pugnacious yet attractive fishes live for around eight to ten years in captivity, although some keepers report that their fish have lived for up to 20 years in exceptional cases.

Another notable feature of all cichlid species is that they have one nostril on either side of their snout, whereas other fishes have two sets. The cichlid uses this nostril to suck in and expel water as a means of “smelling” it. Interestingly, the fish can retain the water for long or short periods, depending on how much the animal needs to sample the scents that the water contains. Saltwater damselfish have the same characteristic, and it’s thought that the two species are closely related.

Care of the Convict cichlid

In this part of our guide, we explain how to look after the Convict cichlid, including advice on feeding the fish and its preferred tank conditions.

Convict cichlids are happiest when they have a large aquarium with plenty of space. You can keep two juvenile specimens in a 20-gallon tank, although you will need to upgrade the setup to something larger once the fish become fully grown. Ideally, a 50-gallon tank is best.

Although Convict cichlids do not need vast amounts of swimming space, they don’t take kindly to overcrowding and will attack their tankmates if they don’t have plenty of room to themselves.

Cichlids prefer moderate water movement, and an efficient filtration system is important to keep the water clean and well-oxygenated.

These are tropical fish that need warm water, ideally at a temperature of 74° to 82° Fahrenheit. The pH range should be kept consistently between 6.0 and 8.0. Convict cichlids can live in a mildly brackish environment, although they’re not suited to a full brackish setup. So, as long as the salinity in the water is around 10% of normal in a saltwater tank with a specific gravity of below 1.0002, the fish will be fine. The water hardness should be between 6 to 8 dGH.

In the aquarium, the substrate should be sandy and soft, and these fish enjoy a planted tank with floating plants, which help to keep light levels on the dim side. Decorate the tank with lots of roots, driftwood, and rocks so that the fish have somewhere to hide if they want to. These fish swim in all areas of the water column, and they prefer an environment without too much open water swimming space.

Cichlids are inclined to dig and rearrange things somewhat, so do make sure that any rooted plants are well-anchored in the substrate.

Amatitlania nigrofasciata is a very aggressive cichlid species that can only be housed with fish of a similar size or larger that have the same belligerent nature. A few species that would make suitable tankmates for the Convict cichlid include:

You should also be mindful that very large fish could easily swallow a Convict cichlid, so bear that in mind when choosing tankmates.

Although you can sometimes get away with keeping several Convict cichlids together, they are highly aggressive when spawning and will take on other fish that are several times their size. The best combination is probably one male Convict and one female Convict kept in a large tank. Also, you shouldn’t keep snails, crabs, or shrimp with Convicts, as the fish will view invertebrates as a food source.

The Convict cichlid is omnivorous and will take a wide variety of suitable foods. A good basic diet could include a flake or pellet cichlid food, blanched zucchini or lettuce, spirulina, worms, and beef heart. Frozen foods, including bloodworms, brine shrimp, and the like are also a good addition to the diet, providing variety and nutrition for your fishes.

If possible, you should offer your fish two to three small feeds per day, rather than one large meal. Give the fish just enough food to keep them busy for a few minutes.

Convict cichlids are extremely easy to breed in the home aquarium, provided that you give them the right tank conditions. The fish are usually able to breed once they reach one year of age.

These fish are cave spawners, so if you want your fish to spawn, make sure that you include several caves or rocky overhangs in your tank. Clay pots or lengths of PVC pipe can also double as breeding sites. Convict cichlids pair up as juveniles, and they should be removed from a larger group to avoid confrontation and aggression.

Convict cichlids engage in a pre-spawning courtship ritual, shaking their heads at each other and circling around. The male fish positions himself vertically, changing color to a more vivid, darker shade while the female Convict flares at the male.

Once courtship is complete, the couple chooses a cave, rock, or another suitable area as a nesting site. The fish clean the site and dig out a shallow depression in the sand. The female Convict then lays between 20 and 40 eggs inside the cave, which the male then fertilizes. Spawning continues until the female has deposited between 100 and 300 eggs, depending on her age. Older females usually lay more eggs than younger fish.

Once the eggs are fertilized, the female fans them to keep them oxygenated while the male remains outside the nest to guard it.

The fry generally hatches within 48 and 72 hours. Within a further six to eight days, the fry is free-swimming, and you can feed them powdered cichlid flake, spirulina, baby brine shrimp, and daphnia. Once the fry reaches a few weeks old, they can take full flake and cichlid pellets.

Convict cichlids are extremely attentive parents, and the female helps the fry to feed by chewing up large food items into manageable pieces for her babies and spitting it out into the water for the youngsters to eat. Both parents provide supplementary food for the fry by way of a mucus-like substance that they secrete onto their bodies.

The cichlid parents are very attentive to their brood, and any fry that wanders away from the nest will be recovered by the parents and returned to safety. That said, you should be warned that the female will sometimes eat her young, which can result in the male attacking and killing his mate. For that reason, it’s usually best to remove the female once the fry is old enough to take full-size food or before that if she is seen to show aggression toward them.

Convict cichlids are pretty robust fish, although they can suffer from common fish diseases, including bacterial infections, flukes, and worms. Ich can be a problem that does sometimes affect Convict cichlids.

Ich is a very common disease that is seen in most freshwater fish species. Ich is caused by a protozoan parasite called Ichthyophthirius multifiliis. The parasite attacks the fish’s gills, body, and fins, manifesting itself as a rash of tiny white spots, hence the disease’s common name, White Spot disease. Before the rash appears, fish can often be seen flicking or rubbing their bodies against the substrate, plants, and decorations in the tank.

Fortunately, Ich is relatively easy to treat, as long as it’s caught early. You can treat the condition with an over-the-counter antibacterial product and by increasing the tank temperature to 86° Fahrenheit for a few days.

You can take steps to keep your fish safe from disease by making sure that your fish tank clean and carrying out regular water tests to make sure that the parameters are suitable for the fish. You must also set aside time to maintain the tank filters and carry out partial water changes each week.

When buying new fish, place them in a quarantine tank for at least 14 days to make sure that the fish show no signs of disease before you introduce them to your main cichlid Convict fish tank. Also, any new plants, substrate, and tank decorations should be washed before you add them to your display tank.

You can buy the Convict cichlid from most good fish stores for the price of just a few dollars. Larger specimens are typically more expensive than smaller ones, although the fish do grow quite quickly. Because of the fish’s aggressive nature, It’s always better to introduce a pair of juveniles of similar size than to put two fish of different sizes into the tank.

If you have a very large aquarium and you’re happy to keep just a pair of Convict cichlid Amatitlania nigrofasciata, perhaps with a few larger, semi-aggressive fish, you might like to consider keeping this species.

Although they are undoubtedly aggressive fish, Convict cichlids are easy to care for, and they’re super-easy to breed in a home tank, making these attractive fishes a good choice for a beginner.