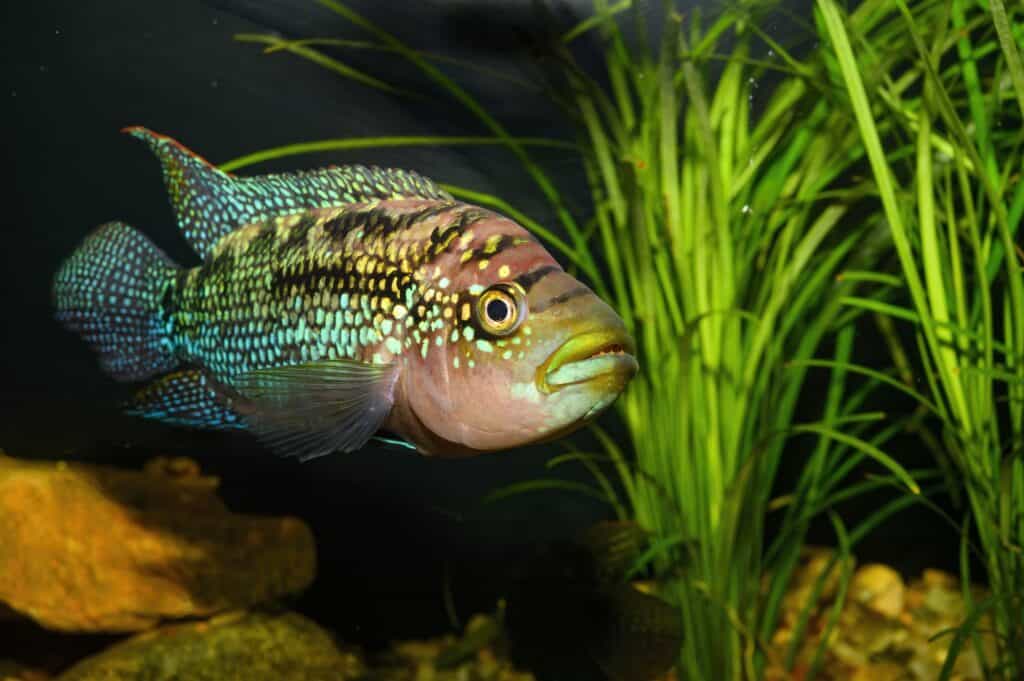 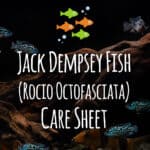 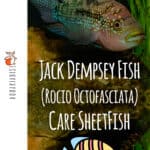 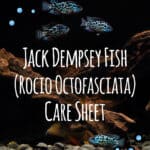 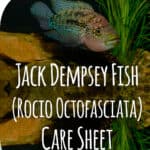 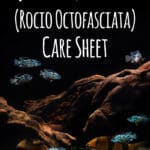 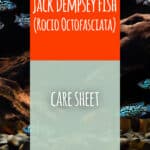 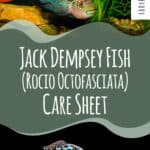 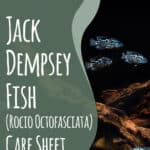 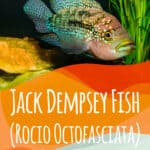 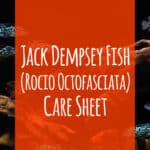 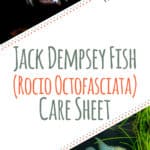 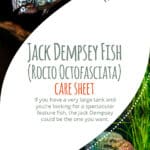 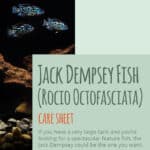 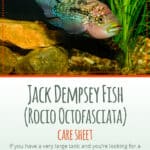 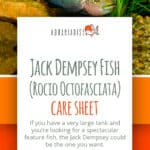 If you have a very large tank and you’re looking for a spectacular feature fish, the Jack Dempsey could be the one you want. These large cichlids are relatively easy to keep, too, making them suitable for relative novices to the hobby.

In this guide, we provide you with an overview of these stunning freshwater fishes, together with a comprehensive care guide.

What is a Jack Dempsey Fish?

The Jack Dempsey fish has the scientific name Rocio octofasciata and was previously known as the Cichlasoma octofasciatum. These are large South American cichlids, growing to almost ten inches in length.

When the species was first introduced to the aquarium hobby, it was reputed to be very aggressive, although we now know that there are many other cichlid species that are more belligerent than the Jack Dempsey cichlid. However, thanks to the fish’s aggressive nature, it was given its common name, after the 1919 Heavyweight Boxing World Champion, Jack Dempsey.

The fish’s scientific genus name of Rocio was taken from the name of the wife of Regan, the author who first described the species. The Spanish interpretation of the name translates as “morning dew,” referring to the Jack Dempsey’s spangled scales on its sides and cheeks.

Where does the Jack Dempsey’s fish come from?

Jack Dempseys were first described by Regan in 1903 and are found in North and Central America, Guatemala, Southern Mexico, Honduras, and Yucatan.

These fish inhabit warm waters where the current is slow-moving, especially swamps and bogs, living in heavily vegetated areas where the substrate is sandy or muddy. Jack Dempseys are mostly carnivorous, feeding on fish, insects, crustaceans, and worms.

The Jack Dempsey is relatively common in the wild and, as such, is not listed on the IUCN Red List.

Juvenile Jack Dempsey cichlids are rather drab in color, having a tan or pale gray body with a few faint turquoise flecks.

When the fish become stressed, they can exhibit quite marked color change, becoming lighter in shade. Also, the Jack Dempsey’s colors fade as it ages.

As well as the regular baseline coloration, breeders have developed many other color varieties, although the startlingly beautiful Electric Blue Jack Dempsey is a naturally occurring variant of the genus. In years past, breeders discarded the bright blue fish as fry, as they were regarded as runtish and malformed. Thankfully, hobbyists appreciated the fishes’ brilliant color, and they are now actively developed and bred in captivity.

These fish are a stunning iridescent blue in color. The base color is dark brown, covered with sparkling metallic blue flecks, and the fish grows to reach just eight inches long, a little smaller than its relative, the Jack Dempsey.

Unfortunately, although the Blue Dempsey is quite easy to breed, you do need to have a well-designed spawning tank set up and quite a lot of luck!

Care of the Jack Dempsey Fish

In this section of our guide, we explain how to look after the Jack Dempsey fish. Remember, when given the correct care, these beautiful fishes can live for up to 15 years, so it pays to know to care for them.

The best tank shape for these fish is long, as opposed to tall, so that there’s plenty of swimming space available for them. Jack Dempseys swim in all areas of the water column, although their preference is for the middle of the tank.

The Jack Dempsey is a large fish and produces a fair amount of waste. So, you’ll need a very efficient filtration system and good water movement to keep the tank clean.

The Jack Dempsey can tolerate a wide range of water conditions, but it’s thought that warmer water can make the fish more aggressive. For that reason, many hobbyists who keep these fish maintain a maximum water temperature of below 78° Fahrenheit.

Although Jack Dempseys are pretty hardy and easy to care for, you do need to keep their water clean.

Because a home aquarium is a closed habitat, ammonia, nitrites, and nitrates can accumulate in the water if you don’t maintain your filtration system properly and carry out 20% water changes every other week. Also, the water hardness and pH can fluctuate due to evaporation. Jack Dempsey cichlids are quite sensitive to water quality, so you must keep on top of your tank.

Remember to replace old filters regularly, don’t overstock the tank, and use a gravel vacuum to remove all decomposing organic matter from the tank when you carry out water changes.

Jack Dempsey fish enjoy digging, so provide your pets with a fine, sandy substrate that they can rummage through without sustaining an injury.

These fish do like to hide, so be sure to provide lots of hiding places by including plenty of sunken driftwood, rocks, and caves in the setup.

Living plants look great and are good for helping to keep the water clean. However, Jack Dempseys do like to eat the more tender plant species, so stick to hardy varieties. Also, plants should be floating or in pots so that they don’t get uprooted by the fishes’ digging. Jack Dempseys like to pick at the floating plants, which can cause a fair amount of damage. However, you can distract the fish from doing so by offering blanched cucumber and lettuce as a supplementary food source.

Put your plants around the edge of the tank so that there’s plenty of space for swimming.

When it comes to lighting, regular levels of light are fine for the Jack Dempsey fish, so you can choose something that suits the requirements of the plants you’ve selected.

Jack Dempseys are omnivores, and they are very easy to please when it comes to diet.

You can feed these fish on a staple diet of tropical fish flakes, cichlid pellets, live, fresh, and frozen foods. Although you can feed these large cichlids a small amount of mammal meat, such as poultry and beef heart, it’s not advisable to overdo it, as the high quantity of protein and fat in these foods can be harmful to your fish if overfed. So, keep these meaty treats as an occasional addition to the diet.

Jack Dempsey fish are not generally regarded as good community residents because they can be highly territorial, especially around others of their own and similar species. It’s also been noted that these fish become more territorial the older they get, so you may find it necessary to keep a single specimen.

If you do want to keep more than one Jack Dempsey, we recommend that you keep them in large groups, as opposed to pairs. Unfortunately, these fishes typically become even more aggressive and territorial when kept in a pair. If you want to breed Jack Dempsey fish, it’s best to keep the couple in their own tank, well away from other fish.

As mentioned previously, the Jack Dempsey is omnivorous, and part of its natural diet includes other fish and crustaceans. For that reason, you should not keep any species of invertebrates or snails in the same aquarium as these fish, as they would most likely be regarded as a food source.

Jack Dempseys can be bred in captivity, and they are relatively easy to spawn. However, because these fish are very aggressive, fighting and injuries are commonplace. So, unless you have experience in breeding cichlids and you have the correct spawning tank setup, it may be less stressful for all concerned to buy your specimens, rather than trying to spawn them at home.

These fishes are egg layers. The female deposits 500 to 800 eggs on flat rocks that are carefully cleaned by the fish as part of the prelude to spawning. When the fry hatch, the parents keep their offspring in pits that they dig out of the substrate. The male and female guard the eggs and fry in the same way that most monogamous cichlid species do.

Ich is a very common disease of freshwater fishes, affecting both coldwater and tropical species. The disease is also commonly called White Spot disease and is caused by a protozoan parasite called Ichthyophthirius multifiliis. Ich is present in most home tanks, but it only affects fish that are weakened by other diseases, old age, or poor aquarium conditions.

Affected fish flick and rub against objects in the tank in an attempt to dislodge the irritating parasites from their skin. Within a few days, a rash of white spots develops across the fish’s body, fins, and gills. If treated promptly, most fish make a full recovery from Ich. However, if the condition is neglected, the fish’s gills can become clogged with parasites, and the creature may suffocate.

To treat Ich, raise the water temperature to 86° Fahrenheit for three days. At the same time, dose the water with an over-the-counter Ich medication, following the manufacturer’s instructions.

All species of cichlids are prone to Hole-In-Head disease, or Hexamita to give the condition its proper name.

Hole-In-Head disease is caused by a parasite that attacks the fish’s body. Lesions form on the fish’s body and head, ultimately allowing bacterial infection to enter, which can be fatal in some cases. It’s widely thought that a deficiency in vitamin C, vitamin D, and or phosphorus can predispose fish to the condition. Poor diet, dirty water, and over-filtration with chemical media may also be contributing factors.

Fortunately, the condition is easily treated by dosing the aquarium with a proprietary medication that you’ll find in your local fish store or online.

Jack Dempsey fish are sturdy characters that should remain healthy if you keep your tank clean, maintain the filtration system properly, and feed your fish a high-quality, appropriate diet.

Any new items that you add to your tank, such as plants or decorations, should be rinsed first to get rid of parasites, and new fish must be kept in a quarantine tank for at least two weeks before you introduce them to your display tank.

Jack Dempsey is readily available through online dealers and in fish stores. In general, these are not expensive fish, and you can usually buy a juvenile specimen for under $10.

If you want to add an Electric Blue Jack Dempsey to your set up, you must be prepared to spend a little more, as this variety is quite rare. These variants are all captive-bred, and they are typically more expensive than their regular counterparts. You’ll sometimes see them advertised as the Blue Dempsey, Jack Dempsey Neon Blue, or Electric Blue Dempsey. As these fish are a little smaller than their regular relatives, you can get away with a slightly smaller tank; otherwise, the two fishes’ care requirements are the same.

If you’re looking for a stunning feature fish and you’re happy to keep one of these creatures alone, or in a large single species tank, the Jack Dempsey cichlid could be the one for you.

These fish are hardy and relatively easy to look after, making them a good option for a beginner, although the Jack Dempsey is not suitable for life in a community aquarium. If you have a little more money to invest in a specimen that is truly dazzling, you might want to consider a Blue Jack Dempsey.