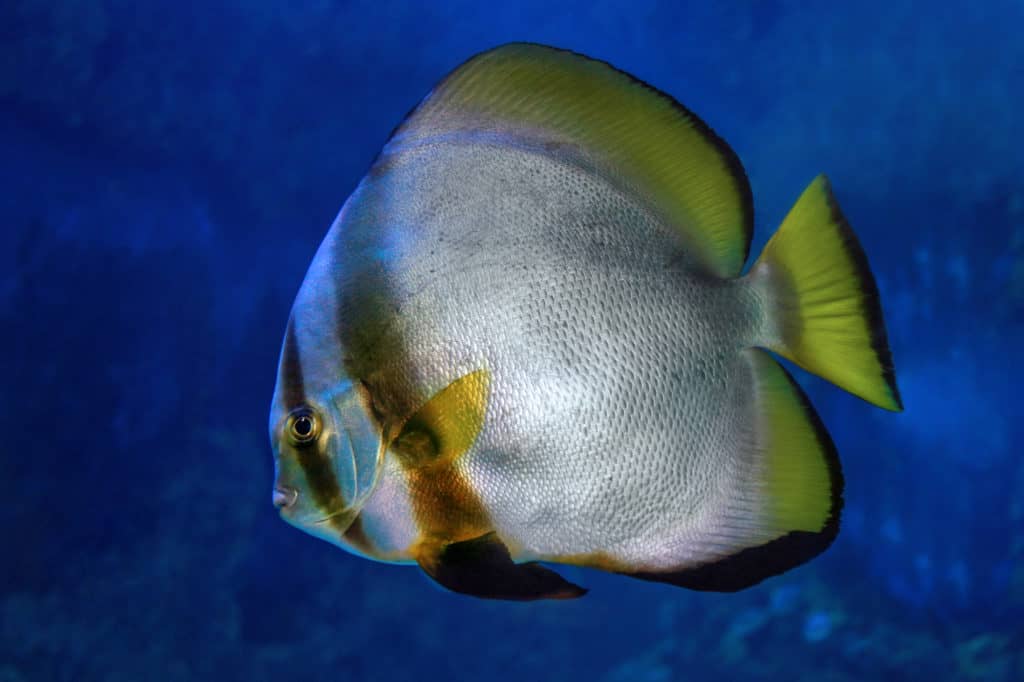 If you’re looking for a truly eyecatching specimen to add to your marine aquarium and you’re an experienced hobbyist, you might want to consider the Pinnatus batfish.

In this article, we explain how you can keep one of these stunning, fascinating creatures in your home aquarium. So, if you’re up for a challenge, read on!

What is a Pinnatus batfish?

The Pinnatus batfish, scientific name, Platax, is also known as the Pinnate batfish, Red-Faced batfish, Pinnate spadefish, Shaded batfish, Dusky batfish, and Firebird fish. Batfish are members of the Ephippidae family, of which there are five recognized members.

Batfish are marine fish and, as such, live in a saltwater environment. These are friendly and engaging fish that can grow from wispy, fragile juveniles into long-lived, hardy aquarium residents if given the correct diet and conditions.

Pinnatus batfish originate from the western tropics of the Pacific Ocean, from the Ryukyu Islands to Australia, including the north, south, and central coast of New South Wales.

Adults of the species generally inhabit coral reefs and inshore waters where they live beneath rocky outcrops at the outer extremes of the reefs. These fish can be found at depths up to 65 feet. Juvenile batfish prefer shallower water, cruising a sheltered reef or mangrove forest where they seek out ledges and caves.

Platax Pinnatus is virtually unrecognizable as a juvenile, having a dusky black colored body that’s outlined with a stunning, fiery neon orange band that extends around the fish’s fragile-looking, flowing finnage.

In contrast, adult Pinnatus batfish look totally different from the juvenile version. The beautiful, striking colors of the juvenile fade as the fish matures, eventually disappearing altogether. The fish grows into its long, flowing fins so that the adult version is more triangular or spadelike in shape. The fish’s opulent, dusky black coloration gradually fades away to a dull silver/gray color. Many adult Pinnatus batfish have a dark stripe through the eye and pectoral fins and sometimes two stripes running horizontally through the fish’s body.

Adult Dusky batfish can grow to average size in captivity of over 12 inches in length with a fin-to-fin height of around 18 inches.

Care of the Pinnatus batfish

Pinnatus batfish are notoriously difficult to keep in the aquarium and historically tended not to live long after the juvenile phase. However, given the correct care and diet, it is possible to raise one of these beautiful fish to maturity.

These fish can grow to a large size of up to 30 inches in the wild, although aquarium-kept specimens are smaller. So, your tank size should accommodate that. Batfish platax needs a home aquarium of at least 200 gallons, preferably more. The tank should also be deep to cater for the fish’s tall shape. Note that many fish diseases are triggered by stress, and keeping your batfish in a cramped tank that has inadequate swimming space is a prime cause of stress.

Wild adult Pinnatus batfish inhabit coral reef waters, hiding under rocky outcrops on the perimeter of the reef. Because batfish graze on certain corals and also eat invertebrates, they are not considered suitable for a reef tank setup. However, you can keep one of these ocean beauties in a FOWLR (fish-only-with-live-rock) habitat. To replicate the fish’s natural habitat, you should use a sandy substrate.

Batfish need plenty of open water swimming space, as well as a few dark hiding places where they can take shelter if feeling threatened. Live rock, overhangs, and caves are perfect for that. However, take care not to crowd the tank so that the swimming space is obstructed, potentially leaving the fish vulnerable to injury from impact with the rocks.

Batfish are marine fish, needing a saltwater environment, although they are occasionally found in brackish waters.

The water must be extremely clean, so you’ll need an efficient mechanical, biological, and chemical filtration system. Ideally, you should have a sump with dry/wet filtration capability and a high-quality protein skimmer. To keep the risk of Marine Ich outbreaks to a minimum, you may also want to run UV sterilizers that will kill the parasites that are responsible for the condition.

Providing wild-caught batfish with their dietary needs has long been a major problem for aquarists. Indeed, historically, most juveniles did not survive for more than a few weeks once they reached adulthood, primarily because the diet they were offered was not sufficient for their needs.

Batfish are extremely difficult to breed in captivity, even for commercial breeding enterprises, meaning that you’ll rarely find captive-bred specimens for sale. However, aquarium-conditioned fish are much easier to keep in the home aquarium if they are already taking food, so if you can find one for sale, that maybe your best option.

Wild-caught Pinnatus batfish should be raised by feeding them live, saltwater feeder fish. Once you have persuaded your batfish to take live food, you stand a good chance of keeping it alive for a longer period. Small live brine shrimp is a popular food that makes a good addition to this species’ diet.

For many years, it was thought that batfish were mainly carnivorous. However, studies found that the species also eat algae. You should feed your Pinnatus batfish several times a day, offering small amounts that the fish will clear up in a minute or two. Adult specimens should be fed live brine shrimp, scallops, mussels, and small shrimp. To provide a complete nutritional palate, the fish’s diet should also include algae and seaweed.

One major problem with juvenile Pinnatus batfish is that they can be slow to get to the food that’s offered, which can lead to starvation. So, keep a close eye on your batfish platax to make sure that they get a full portion of food.

Sometimes, it is possible to persuade a wild-caught batfish to feed by housing them with a small group of the same species.

Pinnatus batfish is a peaceful, slow-moving, species that are quite sociable with other fish that come from the same wild environment and with their own species. Avoid choosing aggressive species that may bully the docile batfish, especially juveniles that can be targeted because of their flashy coloration and flowing finnage.

However, any non-aggressive fish that’s not so small that it might be viewed as food would be suitable as a tankmate for a batfish. On the downside, batfish don’t make the best inhabitants of a reef tank, largely because they may graze on some species of coral and do eat small invertebrates.

Marine Ich is caused by a parasite called Cryptocaryon and is similar to Ich in freshwater fish.

Infected fish may swim abnormally, appear lethargic, rub their bodies against the substrate or aquarium decorations, or hang at the surface of the water.

Although Marine Ich is treatable, many of the treatments that are available are not safe for invertebrates or reef tanks. Infected fish should be moved to a quarantine tank where they can be treated in isolation for six to nine weeks before being returned to the main display aquarium. That allows enough time for the encysted parasites to release the infectious “theronts,” which die off within 24 to 48 hours when they can’t find a host fish to latch onto.

Marine Velvet is caused by a parasite and is a very serious condition that often proves fatal.

The primary external sign of the disease that you should look out for is a gold-colored velvety coating to the skin, which is most easily seen by shining a flashlight onto the fish in a darkened room, ideally against a dark background.

Marine Velvet is treated with copper. Copper is deadly to invertebrates and some corals, so you’ll need to isolate affected fish in a quarantine tank for treatment.

Platax Pinnatus batfish is the most expensive batfish species to buy, with prices ranging from between $70 and $170 per fish.

Most batfish that you see for sale are wild-caught, largely because it’s so difficult to breed them in captivity. Unfortunately, Pinnatus batfish are extremely difficult to ship, and many of them die in transit. Also, make sure that the dealer or store has quarantined your fish for at least a week before you consider taking it home. Before you part with any cash, be sure to check over the fish carefully for signs of Ich or Velvet.

When you get your Pinnatus batfish home, take your time to acclimate the specimen, using a quarantine marine aquarium initially. That will allow your fish to settle in before you expose it to the community in your main display aquarium. Also, you can monitor the fish to make sure that it does not exhibit any signs of disease, which could spread to your main aquarium if you introduce the new Pinnatus too soon.

In this section of our comprehensive guide to keeping the Pinnatus batfish species, we answer a couple of the questions that are most commonly posed by hobbyists who are thinking of adding one of these unusual fish to their tank.

Q: How big do batfish get?

A: In captivity, Pinnatus batfish can reach up to 30 inches in length. These are also tall fish that need a large aquarium to comfortably accommodate their size.

Q: What do batfish eat?

A: Batfish Pinnatus need a varied diet comprised of live brine shrimp, scallops, mussels, and small shrimp. The fish’s diet should also include algae and seaweed.

Q: How do you breed batfish?

A: Batfish cannot be bred in a home aquarium or tank. Although there are some commercial breeding operations, most examples of the species are wild-caught juveniles. Sadly, juvenile Pinnatus batfish don’t cope well with the stress of shipping, and many don’t even reach the hobbyist’s aquarium.

The Pinnatus batfish is a rare and unusual resident of the marine aquarium. Jet black juvenile specimens outlined in fiery orange are a spellbinding sight, floating ghostlike around the tank. But it’s not easy to raise this species to adulthood in a home aquarium setting, and many fish don’t survive for more than a few weeks once they reach maturity.

However, if you have a super-large marine tank that doesn’t contain corals and invertebrates and you’re experienced in keeping challenging species, you might want to take on raising and keeping one of these beautiful ocean giants.